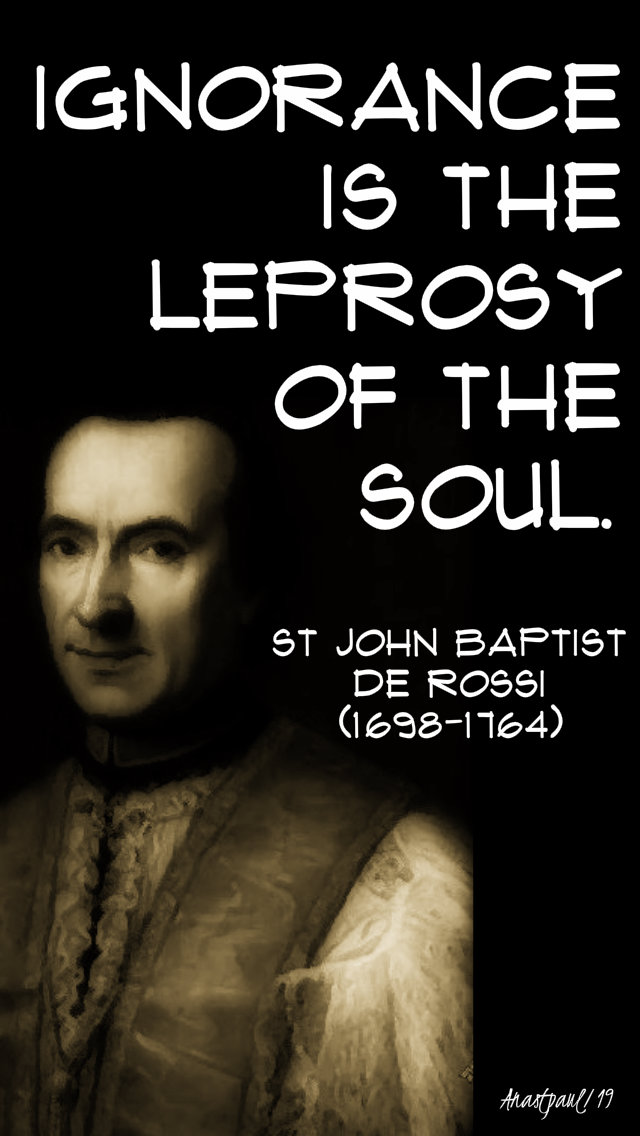 Giovanni Battista de’ Rossi (22 February 1698 – 23 May 1764) was an Italian Roman Catholic priest. He served as the canon of Santa Maria in Cosmedin after his cousin, who was a priest serving there, died. He was a popular confessor despite his initial fears that his epileptic seizures could manifest in the Confessional. Rossi opened a hospice for homeless women not long after his ordination, and was known for his work with prisoners and ill people, to whom he dedicated his entire ecclesial mission.

Giovanni was born on February 22, 1698 in Voltaggio, Italy. He was the fourth child of Charles de Rossi and Frances Anfossi, known to be a holy and faith filled couple. Though John’s family was not financially wealthy, they were rich in faith. Through their guidance and a wonderful education, John learned to excel in his living faith, piety and gentleness.

A pair of priests, Scipio Gaetano and Giuseppe Repetto, saw great potential within John and took his early education and faith formation as a part of their apostolate, taking him under their spiritual care. When he was 10-years-old, John met with a wealthy, noble couple from Genoa after Mass. They, too, noted his gifts and potential. So, they took him in as a page, after receiving his father’s approval. John was taken to Genoa to attend school until 1711.

In 1710, John’s father suddenly passed away. His mother pleaded for him to return home, but John was convinced that the Lord wanted him to finish his education in Genoa. In 1711, John was called to Rome by his cousin, the canon of St. Mary in Cosmedin, Lorenzo de Rossi. Lorenzo suggested John complete his studies there at the Collegium Romanum under the guidance of the Jesuits.

John continued to thrive in his studies. His natural talents, spiritual gifts, Christian virtue and willingness to apply himself to his studies made him the model student. He studied philosophy and theology under the Dominicans at the Dominican College of Saint Thomas.

During this time, John joined the Sodality of the Blessed Virgin and the Ristretto of the Twelve Apostles. Both groups were comprised of lay Christian faithful especially dedicated to Christian prayer and service. He led the members of the groups in meetings, group prayer and outreach to the poor, including visits to the hospitals.

John’s desire to grow in holiness sometimes led him to going overboard in his practices of voluntary mortification and his austerity nearly ruined his health. He also began to have fits of epilepsy. He struggled with these for the rest of his life. John wanted dearly to become a priest. Under normal circumstances, his epileptic fits would have excluded him from the priesthood.

However, he was granted a special dispensation. After ordination as a deacon, he was ordained to the priesthood on March 8, 1721. John believed he had reached his goal and was deeply grateful to the Lord for the vocation of priesthood. So, as an expression of gratitude, he vowed to not accept any ecclesiastical benefits unless commanded to do so out of obedience to his religious superiors.

He devoted himself to serving Rome’s sick, homeless and prostitutes. He would visit the sick and poor in the hospitals by day, and by night he ministered to the street people. He reached out to assist homeless women and helped to found a hospice for them near Saint Galla. He also aided prisoners and workers.

John spoke to the dying about Jesus Christ, leading them to salvation. He desperately wanted to relieve them of their suffering. None of the sick repulsed him, no matter how bad their illness or symptoms because he saw Jesus in them.

In one instance, a young man who was ill and dying from syphilis turned away from John’s attention, out of shame. However, as John showed his selfless heart and helped him with his bedpan, the man finally took the time to listen to John’s words and was able to make a good confession before his death.

Other priests were in awe of John’s holiness and manner of life. They saw that with only a few kind words he could turn people’s lives around. During one of his sermons, John stated to his fellow priests:

“Ignorance is the leprosy of the soul. How many such lepers exist in the church here in Rome, where many people don’t even know what’s necessary for their salvation? It must be our business to try to cure this disease. The souls of our neighbors are in our hands, and yet how many are lost through our fault? The sick die without being properly prepared because we have not given time or care enough to each particular case. Yet with a little more patience, a little more perseverance, a little more love, we could have led these poor souls to heaven.”

The poor come to church tired and distracted by their daily troubles. If you preach a long sermon they can’t follow you. Give them one idea that they can take home, not half a dozen, or one will drive out the other, and they will remember none.”

In 1735, John became titular canon at St. Mary in Cosmedin. Following the death of his cousin in 1737, obedience forced John to accept the canonry. However, John refused the house belonging with the title, and used funds from selling the home toward his cause with the poor.

John’s illness continued to impact his life, as he was afraid of entering the confessional because the possibility of having a seizure during the session. He became accustomed to sending the sinners he found to other priests.

In 1738, John became dangerously ill and was sent to Civita Castellana to regain his health. While there, the bishop residing in that location pushed him to hear confessions. After reviewing his moral theology, John received the special faculty of hearing confessions in any of Rome’s churches.

From then on, John spent countless hours hearing confessions from the poor and illiterate whom he sought from hospitals and their homes. John became the “apostle of the abandoned,” and became known as a second Philip Neri, a hunter of souls. He preached five to six times a day in all kinds of places, including churches, hospitals and prisons. He was also known for his strong devotion to St. Aloysius Gonzaga.

In August 1762, the state of his health became worse. John became worn out and his strength began to deteriorate. His companions begged him to go to Lake Nemi to recover. While there, he started having worse epileptic fits. Two months later, he returned to Rome. John rarely left his room, but in September 1763, he celebrated Mass at Santa Maria in Cosmedin, telling those present that he would be dying soon.

In December, he was found in his room unconscious, after suffering a violent seizure. He remained unconscious for a day. He was given Viaticum, the special prayers and reception of the Holy Eucharist given to the gravely ill and dying. He was also given the Anointing of the Sick, also called Last Rites when it is administered before death.

However, John recovered from his illness and went on to celebrate several more Masses. Soon later, his health once again declined and he was confined to his bed. John Baptist de Rossi passed to the Lord whom he loved with such true devotion on May 23, 1764 in his bedroom in Trinita de Pellegrini.

His body was buried in that church under a marble slab at the altar of the Blessed Virgin. His remains were relocated in 1965 to a new church named in his honor. Pope Pius VI began the cause of canonization for John Baptist de Rossi in 1781, but both the French Revolution and the Napoleonic Wars created setbacks.

Years later in 1859, Pope Pius IX resumed his cause and attributed two miracles to John’s intercession. St. John Baptist de Rossi was beatified on May 13, 1860 by Pope Pius IX and canonized on December 8, 1881 by Pope Leo XIII. He is the patron saint of Voltaggio and his feast day is celebrated on May 23.
(Source: catholiconline)

O God, light of the faithful and shepherd of souls,
who set blessed John Baptist Rossi in the Church
to feed your sheep by his words and form them by his example,
grant that through his intercession
we may keep the faith he taught by his words
and follow the way he showed by his example.
Through our Lord Jesus Christ, your Son,
who lives and reigns with you in the unity of the Holy Spirit,
one God, for ever and ever. Amen 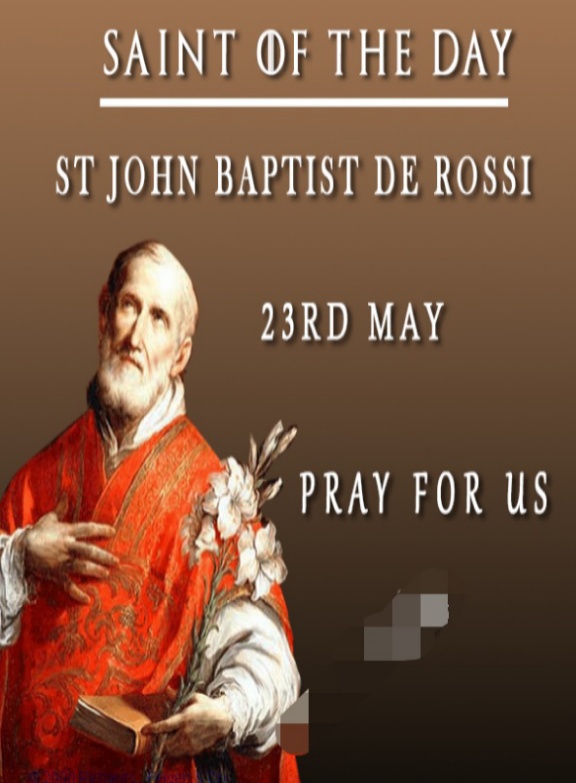 (from The Roman Missal: Common of Pastors—For One Pastor)