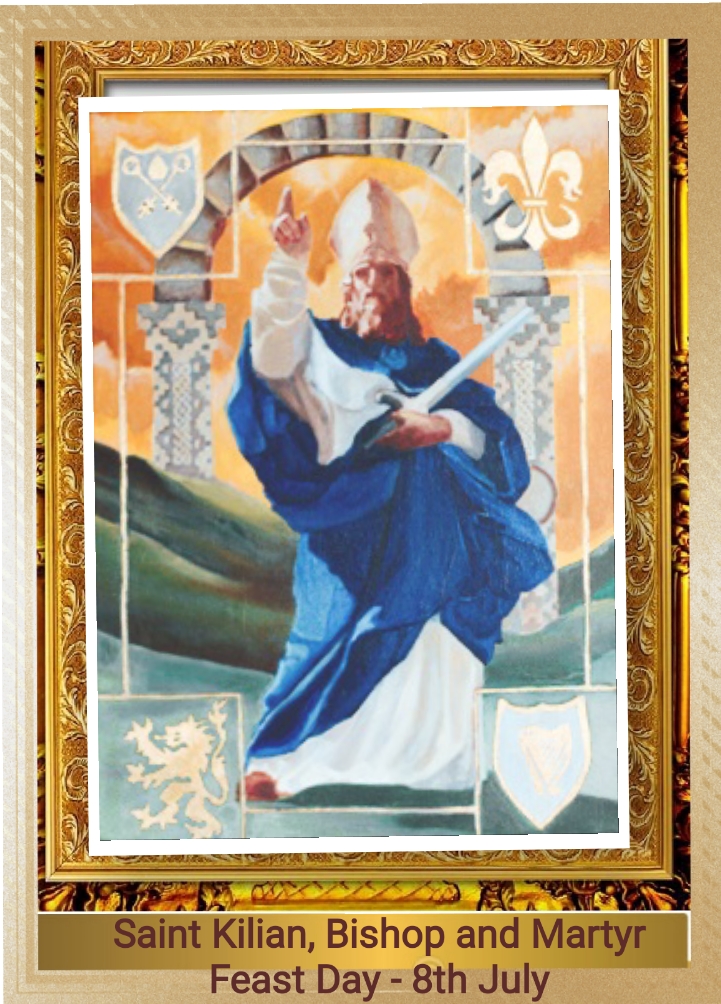 Kilian, also spelled Killian (or alternatively Irish: Cillian; Latin: Kilianus), was an Irish missionary bishop and the Apostle of Franconia (nowadays the northern part of Bavaria), where he began his labours in the latter half of the 7th century. His feast day is 8 July. The oldest texts which refer to him are an 8th-century necrology at Würzburg and the notice by Hrabanus Maurus in his martyrology.

According to Irish sources, Kilian was born to noble parents in approximately the year 640 in Cloughballybeg, near Mullagh in the south-east of what is now County Cavan in Ireland. Some records state that Kilian served as a monk in the celebrated monastery at Hy, Hy being an early name for what was later known as Iona. He began his education in Rosscarbery (the School of Ross), County Cork, and completed it in Tuosist in County Kerry.

In the summer of 686 Kilian, with eleven companions, travelled through Gaul to Rome to receive missionary faculties from the Pope, arriving in late autumn and meeting with Pope Conon. From there they traveled to the castle of Würzburg, which was inhabited by the East Frankish ruler, Herzog (Duke) Gozbert [de], who was, like his people, still pagan.

The original group separated – some departing to seek other fields of missionary work, while Kilian with two companions, the priest Colmán (also called Colonan or Kolonat) and the deacon Totnan, remained in Würzburg. Kilian made this town the base of his activity, which extended over an ever-increasing area in East Franconia and Thüringen (Thuringia). He converted Duke Gozbert with a large part of his subjects to Christianity.

Kilian told the Herzog (Duke) that he was in violation of sacred scripture by being married to his brother’s widow, Geilana. When Geilana, whom Kilian had failed to convert to Christianity, heard of Kilian’s words against her marriage, she was so angry that, in the absence of the Duke, she had her soldiers sent to the main square of Würzburg, where Kilian and his colleagues were preaching.

She plotted against the saint, and caused the murder of him, Colman and Totnan, and the burial of their corpses, sacred vessels, vestments, and holy writings at the crime scene. When the duke returned to her, Geilana denied knowing the location of the missionaries. The actual murderer went mad, confessed his crime, and died miserably. Geilana herself eventually died insane.

Kilian’s good work did not long survive him. When Saint Boniface arrived in Thuringia, he found evidence of his predecessor’s influence. The relics of the martyrs, after cures had brought fame to their burial place, were transferred to the Church of Our Lady in 743 by Saint Burchard, first Bishop of Würzburg.

After Burchard obtained Pope Zachary’s permission for their public veneration, they were solemnly transferred, probably on 8 July 752, to the newly finished Cathedral of the Saviour. Later they were buried in Saint Kilian’s vault in the new cathedral erected on the spot where tradition says they were martyred.

His skull is still preserved, is be-jewelled, and is processed on his feast day. Killian’s copy of the New Testament was preserved in Würzburg Cathedral until 1803, and since then has been in the university library.

On St Kilian’s Day, a glass case containing the three skulls is removed from a crypt, paraded through the streets before large crowds, and put on display in Würzburg Cathedral (dedicated to Kilian). Statues of these three saints (among others) line the famous Saints’ Bridge across the river Main. Kilian is one of the patron saints for sufferers of rheumatism.

Kilian is the patron saint of the parish of Tuosist, near Kenmare in County Kerry, where he is believed to have resided before travelling to Germany. A church and holy well are named after him and his feast day, July 8, is traditionally celebrated with a pattern when crowds visit the well for prayers, followed by evening social events.

His patronage, besides rheumatism, is also against gout, whitewashers, Bavaria, Germany, archdiocese of Paderborn, Germany, diocese of Würzburg, Germany, Tuosist, County Kerry, Ireland (staging point for his mission to mainland Europe) is also the patron saint of Paderborn, Germany. He is portrayed wearing a bishop’s mitre and holding a sword, which was the instrument of his martyrdom (as in his statue at Würzburg).

Heavenly Father, your faithful servant Saint Kilian, notwithstanding threats to his life, undertook to accomplish the mission of evangelizing and converting pagans, even to the extent of courageously telling the Duke Gozbert that his marriage was a sin and being martyred for proclaiming the Gospel Truth.

Assist us, poor sinners, to emulate the same courage in performing our Christian duties, in Jesus’ Name. Amen 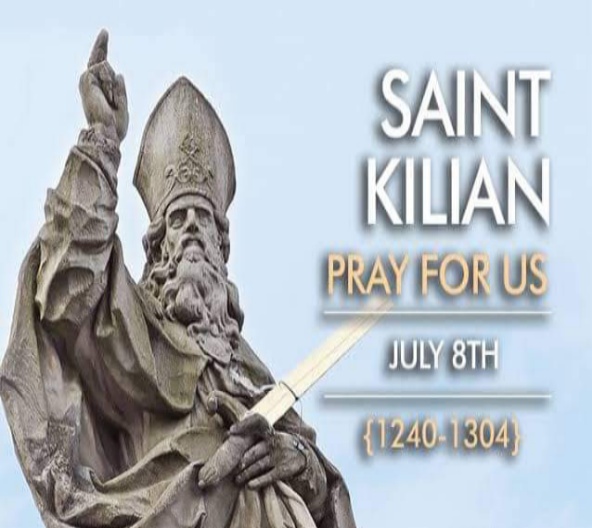 Saint Kilian, pray for us.