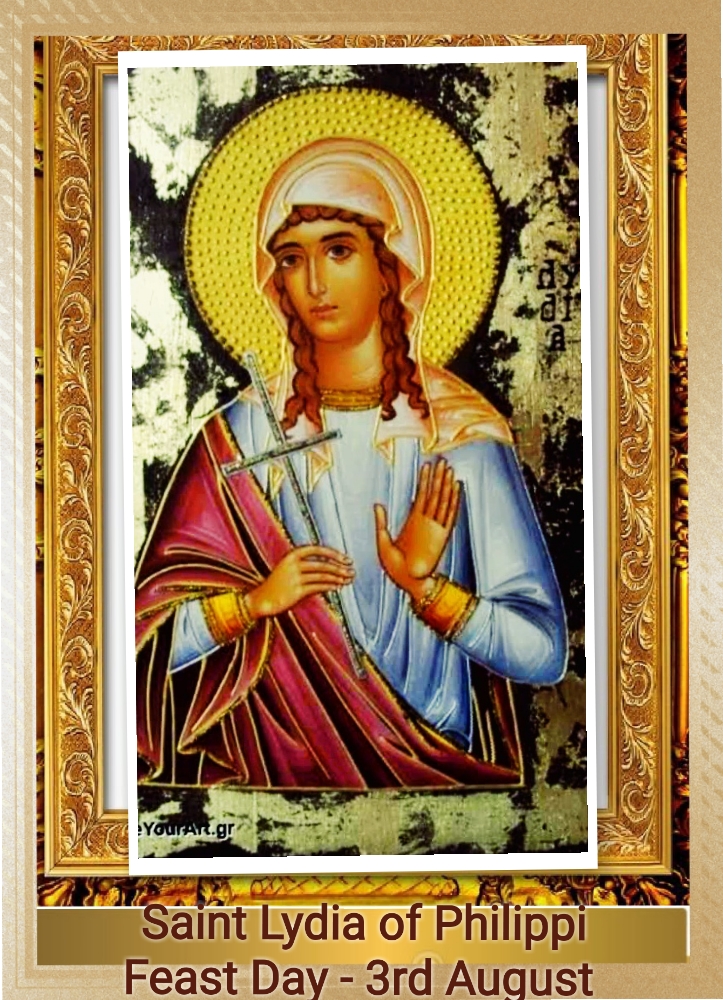 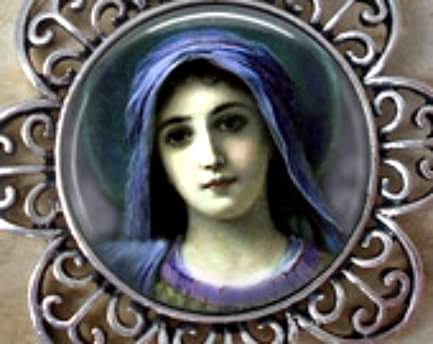 Lydia of Thyatira is a woman mentioned in the New Testament who is regarded as the first documented convert to Christianity in Europe. Several Christian denominations have designated her a saint. The name, “Lydia”, meaning “the Lydian woman”, by which she was known indicates that she was from Lydia in Asia Minor. Though she is commonly known as “St. Lydia” or even more simply “The Woman of Purple,” Lydia is given other titles: “of Thyatira,” “Purpuraria,” and “of Philippi (‘Philippisia’ in Greek).”

“Her name is an ethnicon, deriving from her place of origin”. The first refers to her place of birth, which is a city in the Greek region of Lydia. The second comes from the Latin word for purple and relates to her connection with purple dye. Philippi was the city in which Lydia was living when she met St. Paul and his companions. All these titles expound upon this woman’s background.

Acts 16 describes Lydia as follows :
A certain woman named Lydia, a seller of purple, of the city of Thyatira, one who worshipped God, heard us; whose heart the Lord opened to listen to the things which were spoken by Paul. When she and her household were baptized, she begged us, saying, “If you have judged me to be faithful to the Lord, come into my house, and stay.” So she persuaded us. 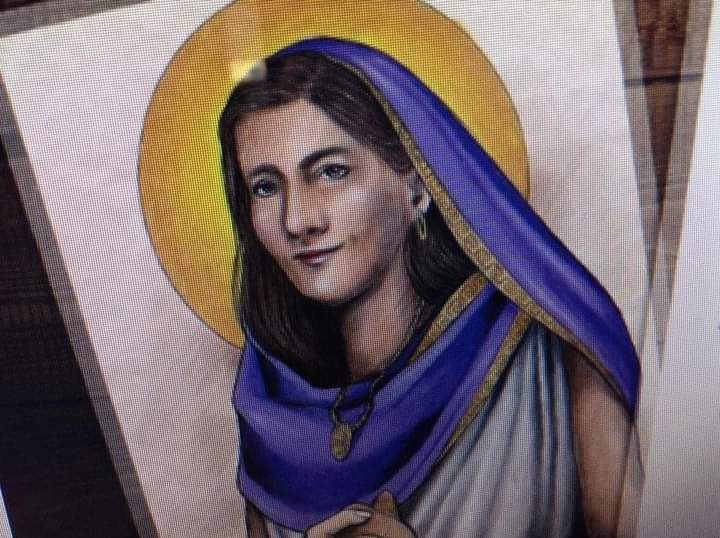 Lydia was most likely from Greek background, since originating from Asia Minor, but probably romanized one, while she lived in a Roman settlement. She was evidently a well-to-do agent of a purple-dye firm in Thyatira, a city southeast of Pergamum and approximately 40 miles (64 km) inland, across the Aegean Sea from Athens. Lydia insisted on giving hospitality to Apostle Paul and his companions in Philippi.

They stayed with her until their departure, through Amphipolis and Apollonia, to Thessalonica (Acts 16:40–17:1). As recorded in the Acts of the Apostles (16:12-30), Lydia of Philippi was the Apostle Paul’s first convert to Christianity in Europe. Her conversion came after hearing Paul’s words in Philippi proclaiming the Gospel of Christ during his second missionary journey. 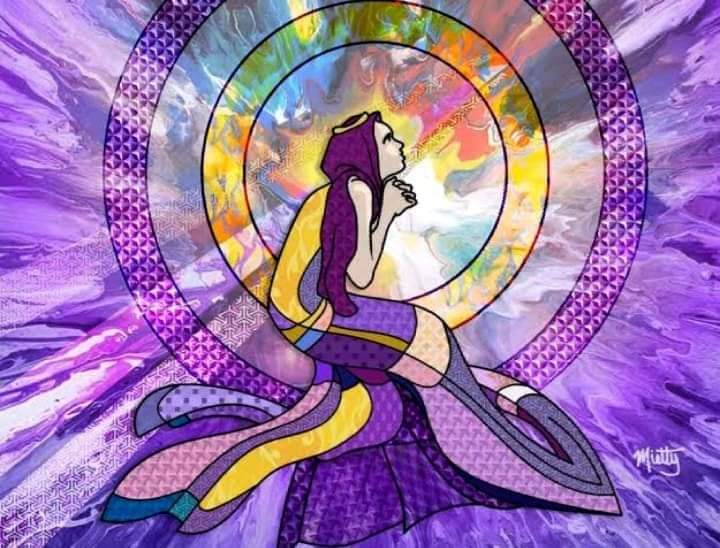 As described in the Acts, Lydia was a “seller of purple”, a person who traded in purple dyes and fabrics for which the city of Thyatira was noted. Purple goods were part of a high value industry and were used by emperors, high government officials, and priests of the pagan religions.

Tradition relates that she and her husband may have been involved in this business. At some point Lydia and her household moved from Asia Minor to the city of Philippi in Macedonia. The reasons she moved may have been business related as Philippi was a Roman colony on the major east-west trade route, the Egnation Highway, between Rome and Asia. Also, she may have been a Jewish convert who no longer could worship in the custom of the Thyatirans.

Lydia met with the Apostle Paul on his second missionary journey about the year 50. Paul and his companions started their journey visiting the established churches in western Asia Minor when he answered a vision in which he saw a man dressed in a Macedonian manner calling upon him to “Come over to Macedonia and help us.“ 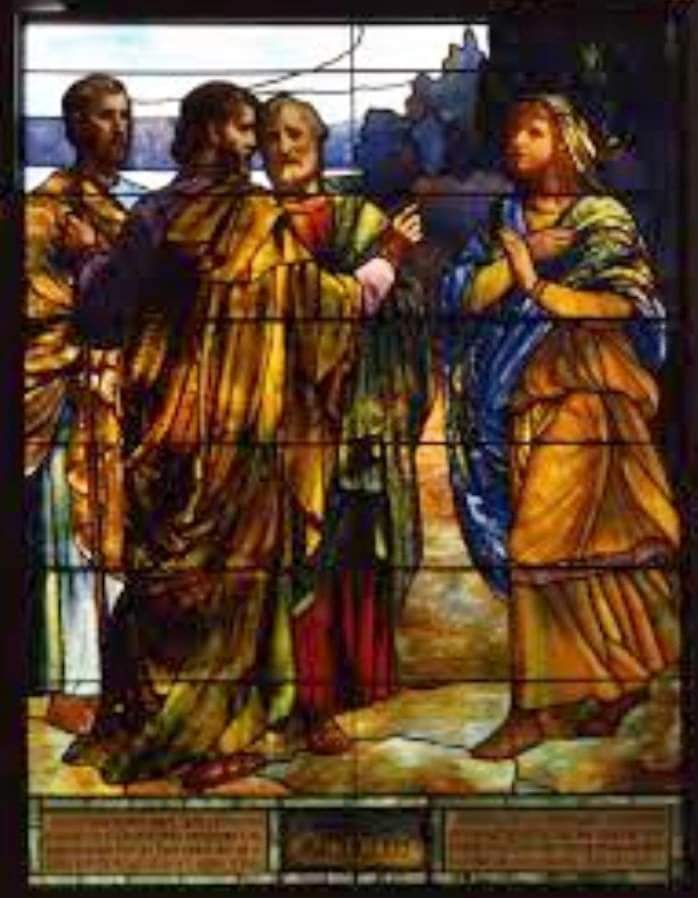 Paul, Silas and Timothy were traveling through the region of Philippi when they encounter “a reputable businesswoman and possibly a widow… who was a righteous Gentile or ‘God-fearer’ attracted to Judaism”. “She was one of a large group considered sympathizers with Judaism, believers in the one God, but who had not yet become ‘proselytes’ or taken the final step to conversion to Judaism”.

Because these encounters and events take place “in what is now Europe,” Lydia is considered “the first ‘European’ Christian convert”. Thyatira in the province of Lydia (located in what is now western Turkey) was famous for the red [variety of purple] dye”. Lydia of Thyatira is most known as a “seller” or merchant of purple cloth, which is the likely reason for the Catholic Church naming her “patroness of dyers.”

It is unclear as to if Lydia simply dealt in the trade of purple dye or whether her business included textiles as well, though all known icons of the saint depict her with some form of purple cloth. Most portray this holy woman wearing a purple shawl or veil, which allows many historians and theologians to believe that she was a merchant of specifically purple cloth. 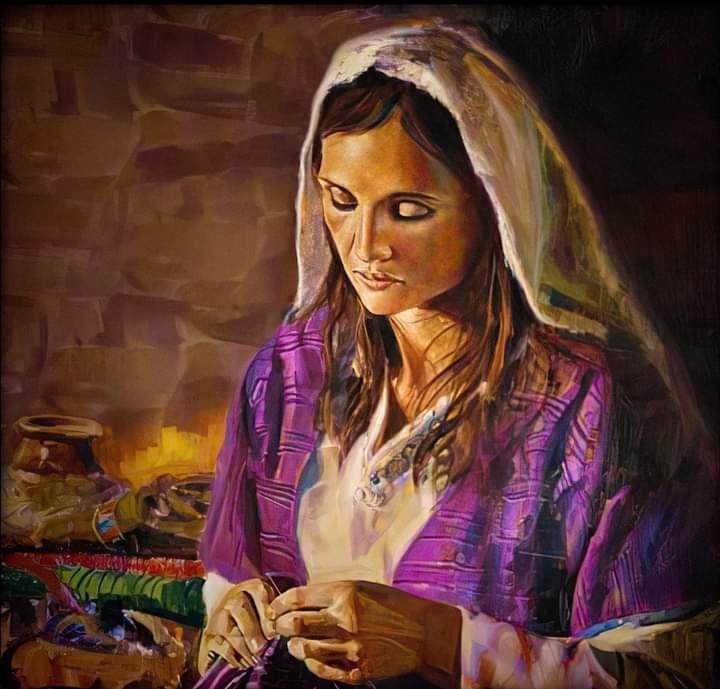 There is some speculation regarding Lydia’s social status. Theologians disagree as to whether Lydia was a free woman or servant. “There is no direct evidence that Lydia had once been a slave, but the fact that her name is her place of origin rather than a personal name suggests this as at least a possibility”. Ascough cites other examples of noble women named Lydia from the first or second centuries, so it is unlikely that she was actually a slave or servant.

Furthermore, the book of Acts records, “When she and the members of her household were baptized, she invited us to her home. “If you consider me a believer in the Lord,” she said, “come and stay at my house.” And she persuaded us.” This implies that Lydia was in charge of the household, as she was able to persuade the household to be baptised, and had authority in the home to invite Paul and his companions to stay in her house – both things that a servant would be far less able to do.

Because women did not possess the same equality rights as modern women, it appears unusual that Lydia would be capable of inviting a group of foreign men to her house without a man’s consent. “The fact that there is no mention of a man has been used to deduce that she was a widow, but this has been challenged as a patriarchal interpretation”. 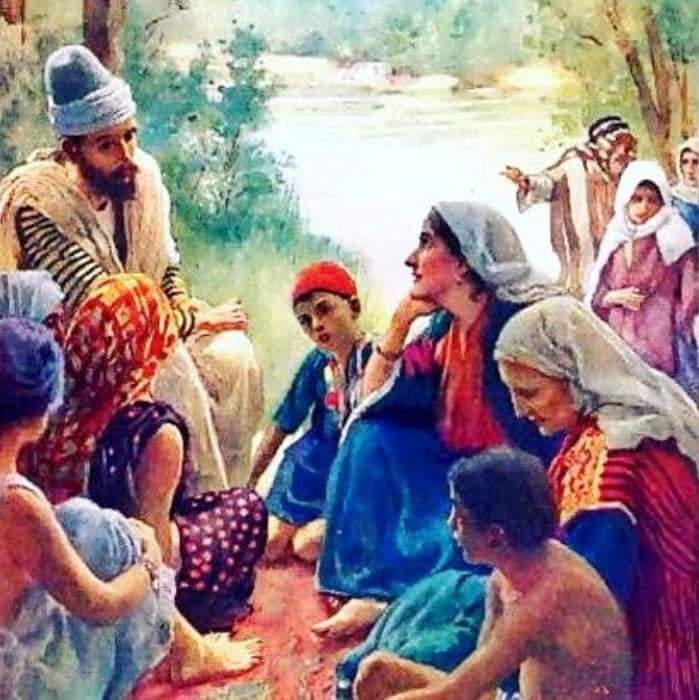 Lydia’s evident social power exemplified by her control of a household and ownership of a house (which she offered to St. Paul and his companions) indicates that she was most likely a free woman and possibly a widow. Many Christian denominations recognize Lydia of Thyatira as a saint, though her feast day varies greatly. In the Catholic Church, her feast day is August 3. The Episcopal Church honors St. Lydia along in its liturgical calendar on May 21.

The Lutheran community is also divided. The ELCA commemorates Sts. Lydia, Dorcas and Phoebe on January 27, while the LCMS celebrates the three women on October 25. Devotion to St. Lydia is greater in the Orthodox Church than in the Latin Rite of the Roman Catholic Church, and this is evident by the myriad of icons depicting this woman. 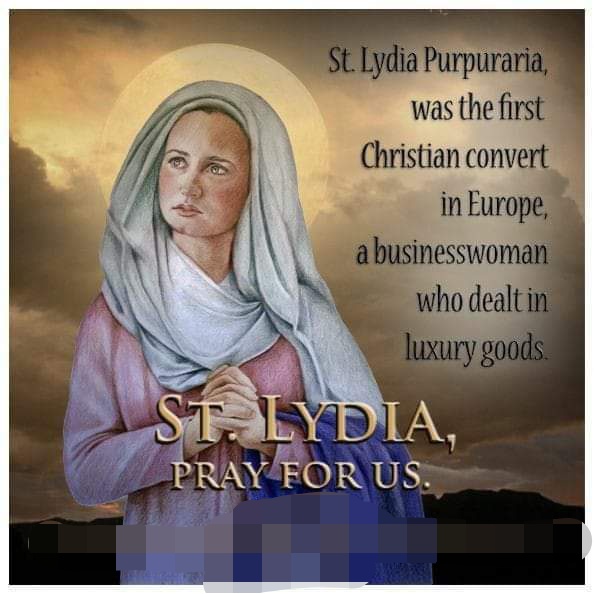 Eternal Father, your divine likeness was securely preserved, through Saint Lydia, for she unhesitatingly carried the cross through instant conversion, to follow Christ.

To her remarkable virtues, Lydia’s unmitigated faithfulness to your call marked the blossoming of the Church in Philippi and throughout Europe.

By example and precept she taught us to ignore the flesh because it is perishable, and to attend to the concerns of the immortal soul. May we follow her example, that we may join the chorus of angels in singing your praises, through Christ our Lord. Amen 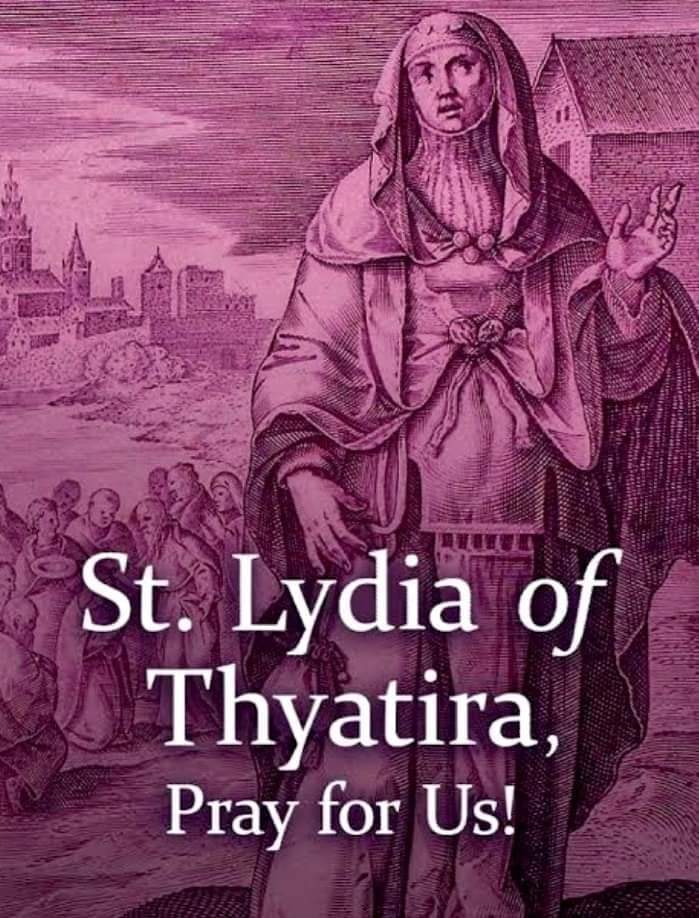 Saint Lydia of Philippi, pray for us.