FEAST OF SAINT MARTIN I, THE CONFESSOR, POPE AND MARTYR – 13th APRIL 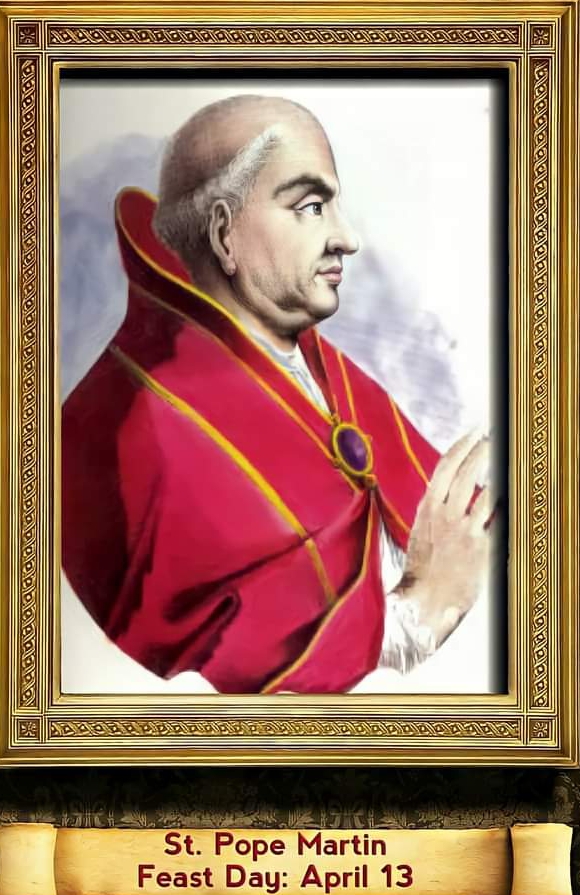 Pope Martin I, (between 590 and 600 – 16 September 655), also known as Martin the Confessor, was the bishop of Rome from 21 July 649 to his death on 16 September 655. He served as Pope Theodore I’s ambassador to Constantinople and was elected to succeed him as pope.

He was the only pope during the Eastern Roman domination of the papacy whose election was not approved by an imperial mandate from Constantinople. For his strong opposition to Monothelitism, Pope Martin I was arrested by Emperor Constans II, carried off to Constantinople, and ultimately banished to Cherson. He is considered a saint and martyr by the Catholic Church and the Eastern Orthodox Church.

Martin was born near Todi, Umbria, in the place now named after him (Pian di San Martino). According to his biographer Theodore, Martin was of noble birth, of commanding intelligence, and of great charity to the poor. Piazza states that he belonged to the order of St. Basil.

In 641, Pope John IV sent the abbot Martin into Dalmatia and Istria with large sums of money to alleviate the distress of the inhabitants, and redeem captives seized during the invasion of the Slavs. As the ruined churches could not be rebuilt, the relics of some of the more important Dalmatian saints were brought to Rome, where John then erected an oratory in their honour.

The struggles that existed within the Church at that time were magnified by the close cooperation of emperor and patriarch. A teaching, strongly supported in the East, held that Christ had no human will. Twice emperors had officially favored this position, Heraclius by publishing a formula of faith and Constans II by silencing the issue of one or two wills in Christ. 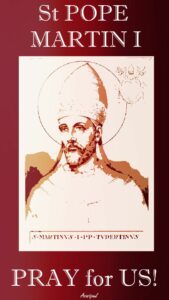 Shortly after assuming the office of the papacy (which he did without first being confirmed by the emperor), Martin held a council at the Lateran in which the imperial documents were censured, and in which the patriarch of Constantinople and two of his predecessors were condemned. Constans II, in response, tried first to turn bishops and people against the pope.

Failing in this and in an attempt to kill the pope, the emperor sent troops to Rome to seize Martin and to bring him back to Constantinople. Already in poor health, Martin offered no resistance, returned with the exarch Calliopas and was then submitted to various imprisonments, tortures and hardships. On 17 June 653, Martin was arrested in the Lateran along with Maximus the Confessor.

He was hurried out of Rome and conveyed first to Naxos, Greece, and subsequently to Constantinople, where he arrived on 17 September 653. He was saved from execution by the pleas of Patriarch Paul II of Constantinople, who was himself gravely ill. Martin hoped that a new pope would not be elected while he lived but the imperial Byzantine government forced the Romans to find a successor.

Eugene I was elected on 10 August 654, and Martin apparently acquiesced. After suffering an exhausting imprisonment and reportedly many public indignities, Martin was banished to Cherson, where he arrived on 15 May 655. He died there on 16 September, tortures and cruel treatment having taken their toll. He is the last of the early popes to be venerated as a martyr.

QUOTE: The breviary of the Orthodox Church pays tribute to Martin: “Glorious definer of the Orthodox Faith…sacred chief of divine dogmas, unstained by error…true reprover of heresy…foundation of bishops, pillar of the Orthodox faith, teacher of religion…. Thou didst adorn the divine see of Peter, and since from this divine Rock, thou didst immovably defend the Church, so now thou art glorified with him.” 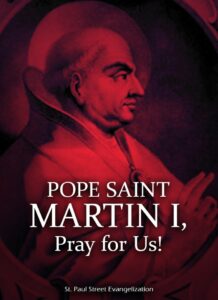 Pope Saint Martin I, through your intercession before the Father in Heaven, fortify all teachers and leaders of the Church to remain steadfast in the truth, to advocate for the truth, and to suffer for the truth, no matter the personal cost. Amen