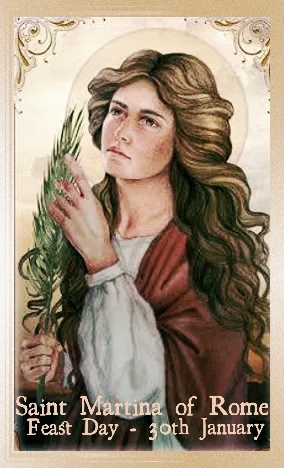 Saint Martina, a Roman virgin, was the child of a noble Christian consul, of whom it was said that he was extremely merciful towards the poor, and very zealous for faith in the Most Holy Trinity. She lost both her parents while she was still very young, and for love of Christ she distributed all she inherited to the poor, that she might be more free to hasten towards martyrdom. She was described as a noble and beautiful virgin. She so openly testified to her Christian faith that she could not escape being persecuted by Severus Alexander.

Under the Rule of Emperor Alexander Severus, she was discovered in a church by three officers of a search party, and commanded to follow them to a temple of Apollo. She cheerfully agreed, saying she would do so after praying for a short time and taking leave of her bishop. The officers reported their important capture to the emperor, believing she would readily renounce her faith. But when he ordered her to speak, she replied that she would sacrifice to none other than the true God, and never to idols, the handiwork of men. Arrested and commanded to return to idolatry, she refused, and was subjected to torture.

She was tortured by iron hooks, but her executioners were thrown to the ground amid a great light as she prayed, and arose converted, like Saint Paul, to the Christian faith. She was tormented again the following day before the emperor, cruelly scourged while attached by her hands and feet to posts. When, one day later, she was taken to a temple of Diana, the demon left amid horrible screams. She was condemned to be devoured by wild beasts in the amphitheater but was miraculously untouched by them. She was then thrown onto a burning pyre, from which she also escaped unhurt.

Fire from heaven fell and burnt the idol, which in tumbling crushed many of its priests and pagan worshipers. Saint Martina, after suffering other tortures and being spared by an enraged lion and a fiery furnace, was finally beheaded. Her death occurred on January 1st during the fourth year of Alexander Severus. Her hagiography asserts that some of her executioners also converted to Christianity and were themselves beheaded. Ostia, at the mouth of the Tiber, was the scene of her martyrdom.

Her body was translated to Rome, where a church near the Mamertine Prison, Santi Luca e Martina, was later dedicated in her honour. On October 25, 1634, during restoration of the crypt, as was common at this time in Rome, buried remains were found by the painter Pietro da Cortona, president of the Accademia di San Luca, and were attributed to the martyred Saint Martina. Pope Urban VIII, who occupied the Holy See at that time, had the church repaired and, it would seem, composed the hymns which are sung at her office.

O God, Whose arm upholds the martyrs, take from us the pleasures which would make us fall to temptation. O Triune God of Father, Son and Holy Spirit, give to your servants your light of grace, and may your mercy crown our soul with bliss.

Through our Lord Jesus Christ your Son, Who lives and reigns with you in the unity of the Holy Spirit, one God forever and ever. Amen 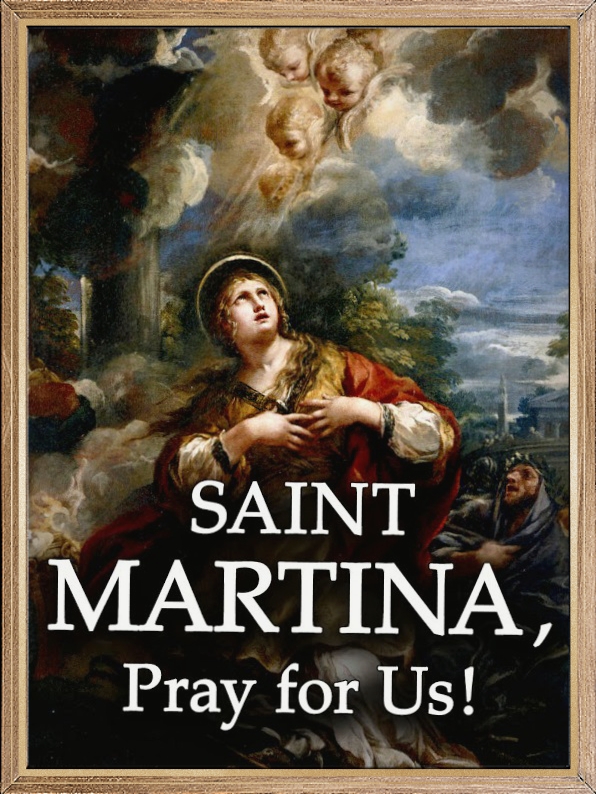 Saint Martina, hear the prayers of all devoted souls on this festive day, offering you veneration in your holy name. Amen