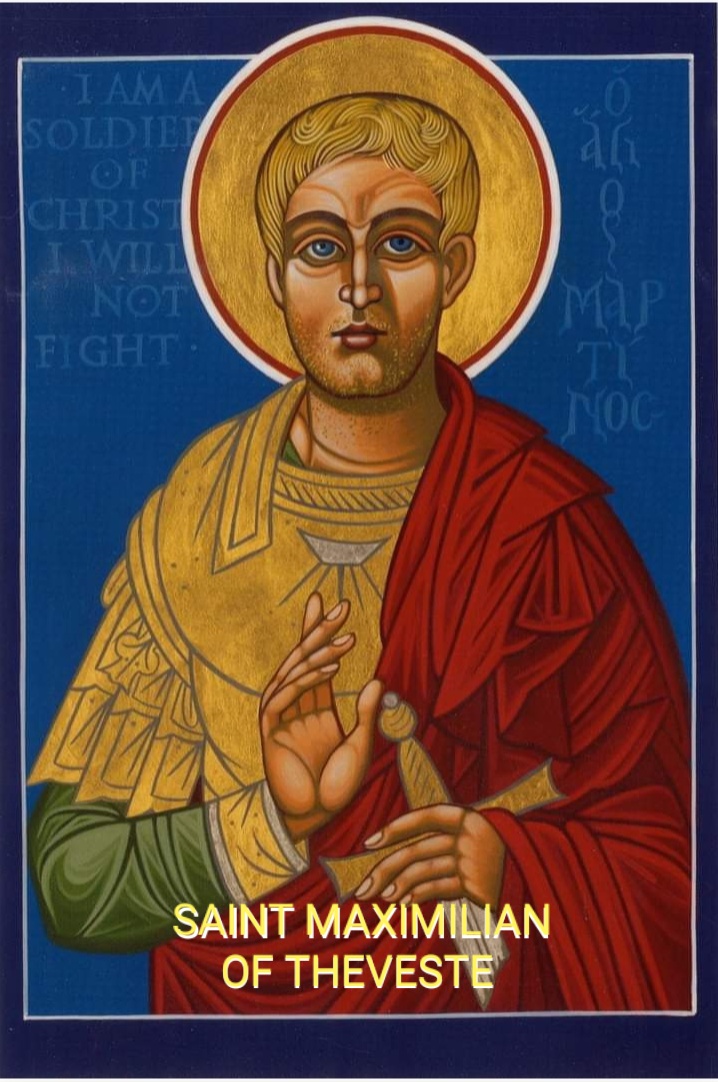 Saint Maximilian of Tebessa, (Theveste), also known as Maximilian of Numidia, (AD 274–295), was a Christian saint and martyr, whose feast day is observed on 12 March. Born in AD 274, the son of Fabius Victor, an official connected to the Roman army, Maximilian was obliged to enlist at the age of 21. He is noted as the earliest conscientious objector, although there have been other Christians at the time who refused military service and were executed.

In the African churches of the late Roman Empire, it was not uncommon for liturgies to include readings from the acts and passions of martyrs. The one often included for Saint Maximilian is the authentic record of his trial in Numidia (now Algeria) and execution for refusing to be conscripted into the Roman army. Maximilian resisted because he didn’t want to be tainted by the idolatry of wearing the emperor’s image around his neck.

Maximilian also refused because he was a pacifist, perhaps one of the earliest conscientious objectors. There has long been a debate within the Church concerning the radical pacifism advocated by Our Lord and the less stringent, but more practical, position allowing self-defense and just war.
Prior to the Edict of Milan and the toleration of Christianity, Christians believed that bearing arms contradicted the Gospel. Tertullian, for example, prohibited military service.

Saint Hippolytus said that it was impossible to be a soldier and a catechumen-as contradictory as being a prostitute and catechumen (at least part of his reasoning dealt with the association of soldiers with pagan gods and sacrifices). The Church moderated its position. The Council of Arles (314) said that soldiers who left the army during peace time would be excommunicated.

About 295, the proconsul Dion went to Theveste to recruit soldiers for the third Augustan legion stationed there. At this time the Roman army was mainly volunteers, but sons of veterans were obliged to serve. Maximilian, the 21-year-old son of the Roman army veteran Fabius Victor, was presented to the recruiting agent. The advocatus Pompeianus, seeing that Maximilian would make an excellent recruit, asked for him to be measured. He was 5’10”.

The ensuing dialogue between the proconsul Dion and Maximilian has been preserved to this day. When asked his name, Maximilian replied, “Why do you wish to know my name? I cannot serve because I am a Christian.” Nevertheless, orders were given for him to be given the military seal. He answered, “I cannot do it: I cannot be a soldier.” When told he must serve or die, he said, “You may cut off my head, but I will not serve. My army is the army of God, and I cannot fight for this world”. 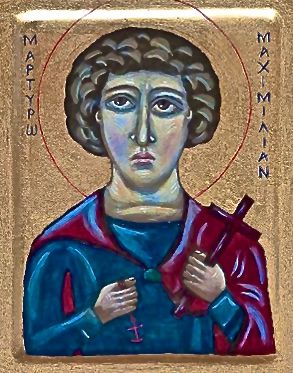 It was pointed out to him that there were Christians serving as bodyguards for the emperors Diocletian and Maximian. To this he replied, “That is their business. I am a Christian, too, and I cannot serve.” Dion then told Victor to correct his son. Victor, who had become a Christian like his son, said, “He knows what he believes, and he won’t change his mind.” Dion insisted, but Maximilian would not agree to wear the seal.

He adamantly said, “I will not accept the seal of this world; if you give it to me, I will break it for it is worthless. I cannot wear a piece of lead around my neck after I have received the saving sign of Jesus Christ, my Lord, the son of the living God. You do not know Him; yet He suffered for our salvation: God delivered Him up for our sins. He is the one whom all Christians serve; we follow Him as the Prince of Life and Author of Salvation.”

Then he added, “I shall not die. When I leave this earth I shall live with Christ my Lord.” He was sentenced accordingly. The verdict read, “Whereas Maximilian has disloyally refused the military oath, he is sentenced to die by the sword.” Just before his execution, Maximilian encouraged his companions to persevere and asked his father to give his new clothes to the executioner.

We are told that Fabius Victor “went home happily, thanking God for having allowed him to send such a gift to heaven.” The day was 12th March, 295. The place of Maximilian’s death is given as Theveste (Tebessa) in Numidia, but it may have been nearer Carthage, where his body was taken for burial by a devout woman named Pompeiana. It was buried close to the relics of Saint Cyprian.

The Order of Maximilian, a group of American clergy opposed to the Vietnam War in the 1970s, took their name from him. Maximilian’s name has been regularly read out, as a representative conscientious objector from the Roman Empire, at the annual ceremony marking International Conscientious Objectors’ Day, 15 May, at the Conscientious Objectors Commemorative Stone, Tavistock Square, Bloomsbury, London.

Grant, O Lord Jesus, that we too may give ourselves entirely, without reserve, to the love and service of our God, not fearing persecution and death, in imitation of your humble servant, Maximilian. Amen 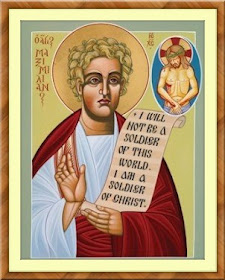 Saint Maximilian of Theveste, pray for us, that we will retain the courage to hold firm to our faith despite the trials. Amen