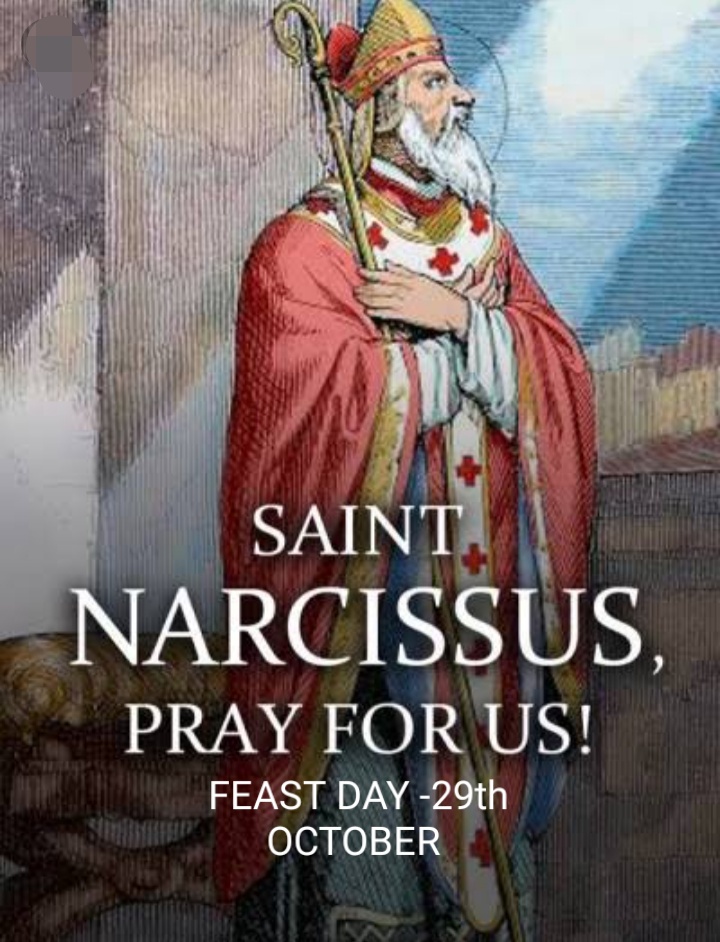 Narcissus was born towards the end of the first century in AD 99. He was almost 80-years-old when he was placed at the head of the church of Jerusalem, making him the 30th bishop of that see. In 195, he and Theophilus, bishop of Caesarea in Palestine, presided together in a council of the bishops of Palestine held at Caesarea regarding the time Easter is celebrated. It was then decreed that the feast of Easter is to be kept always on a Sunday.

Bishop and historian, Eusebius says this particular Easter miracle can be attributed to Narcissus. One year on Easter-eve the deacons did not have any oil for the lamps in the church, which was necessary at the solemn divine office on that day. Narcissus ordered those who had care of the lamps to bring him some water from the neighboring wells. He pronounced a devout prayer over the water, and instructed them to pour it into the lamps. The water was immediately converted into oil, to the great surprise of all the faithful.

Yet, not even the veneration of all good men could shelter Narcissus from the jealousy of the wicked. Three persistent sinners, fearing Narcissus’ severity in the observance of religious discipline, accused him of an unimaginable crime. The sinners maintained they were telling the truth by adding additional security into their claims. If they were not speaking the truth, one wished he might perish by fire, another, that he might be struck with leprosy, and the third, that he might lose his sight.

Nevertheless, their accusations were found to be false and Divine Retribution was called upon them. The first was burnt in his house, along with his whole family, by an accidental fire in the night. The second was struck with a universal leprosy; and the third, terrified by these examples, confessed the conspiracy and slander, and by the abundance of tears which he continually shed for his sins, lost his sight before his death.

Narcissus soon left Jerusalem for a life of solitude, and spent several years undiscovered in his retreat, where he enjoyed all the happiness and advantage which a close conversation with God can bestow. He returned, years later, and the faithful rejoiced and convinced Narcissus to once again assume the administration of the diocese, and he accepted. As Narcissus started to reach an extreme old age, he made St. Alexander his coadjutor.

St. Narcissus continued to serve his flock, and even other churches, by his diligent prayers and his earnest exhortations to unity and concord, as St. Alexander testifies in his letter to the Arsinoites in Egypt, where he says that Narcissus was at that time about 116 years old. He passed away soon after in AD 216, at the age of 117. He is often depicted as a Bishop holding a thistle in blossom, with a pitcher of water next to him or with an angel shown carrying his soul to heaven. His feast day is celebrated on October 29.

God, You made St. Narcissus an outstanding exemple of Divine love and mercy and the Faith that conquers the world. Lord, add him to the role of saintly pastors, who have devoted themselves to the Faith.

Grant by his intercession that we may persevere in Faith and love and become sharers of his glory. We ask this in the Name ofJesus the Lord. Amen 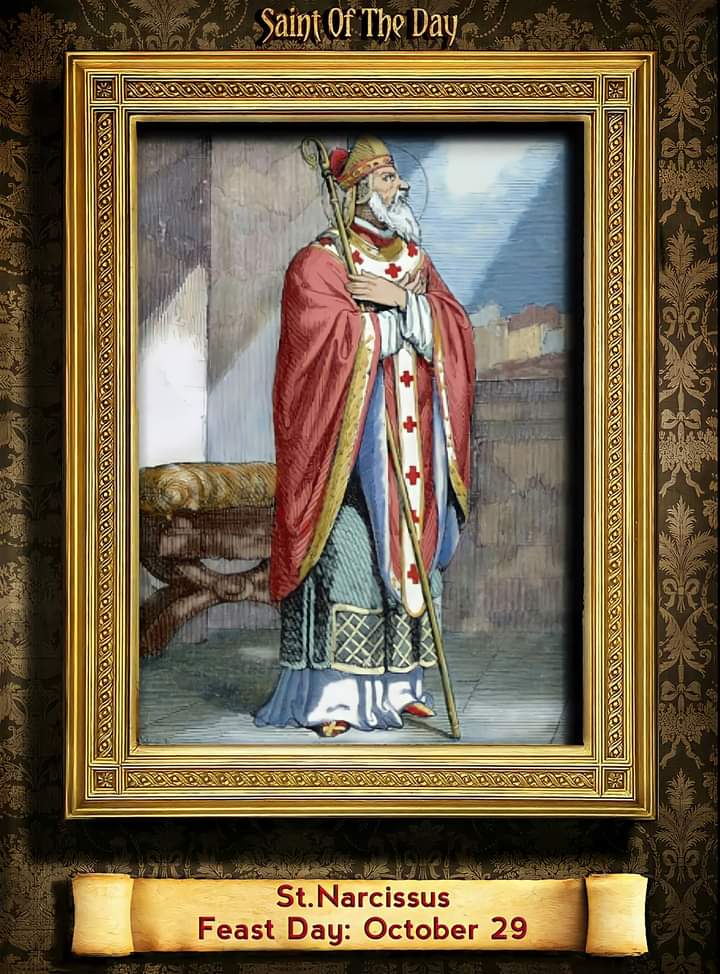 Saint Narcissus, pray for us!