FEAST OF CORPUS CHRISTI – SOLEMNITY OF THE MOST HOLY BODY AND BLOOD OF CHRIST. 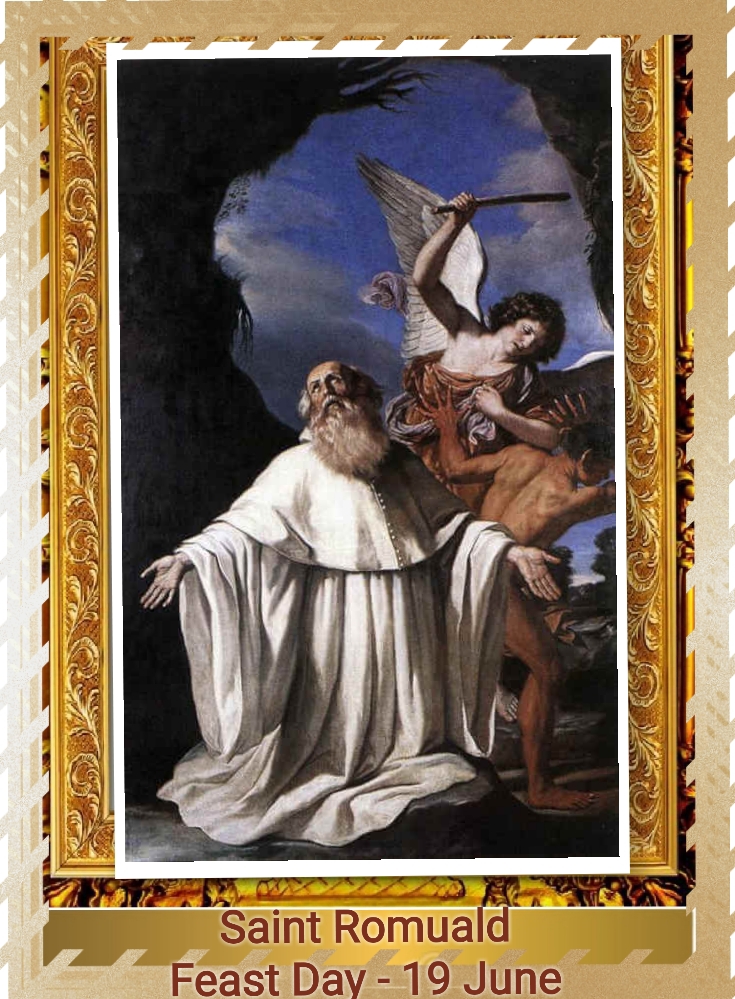 Romuald (c. 951 – traditionally 19 June, c. 1025/27 AD)[1] was the founder of the Camaldolese order and a major figure in the eleventh-century “Renaissance of eremitical asceticism”. Romuald spent about 30 years traversing Italy, founding and reforming monasteries and hermitages. According to the vita by Peter Damian, written about fifteen years after Romuald’s death, Romuald was born in Ravenna, in northeastern Italy, to the aristocratic Onesti family.

His father was Sergius degli Onesti and his mother was Traversara Traversari. As a youth, according to early accounts, Romuald indulged in the pleasures and sins of the world common to a tenth-century nobleman. At the age of twenty he served as second to his father, who killed a relative in a duel over property. Romuald was devastated, and went to the Basilica of Sant’Apollinare in Classe to do 40 days of penance.

After some indecision, Romuald became a monk there. San Apollinare had recently been reformed by St. Mayeul of Cluny Abbey, but still was not strict enough in its observance to satisfy Romuald. His injudicious correction of the less zealous aroused such enmity against him that he applied for, and was readily granted, permission to retire to Venice, where he placed himself under the direction of a hermit named Marinus and lived a life of extraordinary severity.

About 978, Pietro Orseolo I, Doge of Venice, who had obtained his office by acquiescence in the murder of his predecessor, began to suffer remorse for his crime. On the advice of Guarinus, Abbot of Saint-Michel-de-Cuxa, in Catalonia, and of Marinus and Romuald, he abandoned his office and relations, and fled to Cuxa, where he took the habit of St. Benedict, while Romuald and Marinus erected a hermitage close to the monastery.

Romuald lived there for about ten years, taking advantage of the library of Cuxa to refine his ideas regarding monasticism. After that he spent the next 30 years going about Italy, founding and reforming monasteries and hermitages. His reputation being known to advisors of the Holy Roman Emperor Otto III, Romuald was persuaded by him to take the vacant office of abbot at Sant’Apollinare to help bring about a more dedicated way of life there. 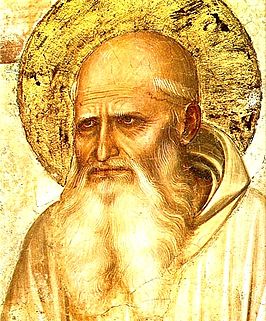 The monks, however, resisted his reforms, and after a year, Romuald resigned, hurling his abbot’s staff at Otto’s feet in total frustration. He then again withdrew to the eremitical life. In 1012 he arrived at the Diocese of Arezzo. Here, according to the legend, a certain Maldolus, who had seen a vision of monks in white garments ascending into Heaven, gave him some land, afterwards known as the Campus Maldoli, or Camaldoli.

St. Romuald built on this land five cells for hermits, which, with the monastery at Fontebuono, built two years later, became the famous mother-house of the Camaldolese Order. Romuald’s daunting charisma awed Rainier of Tuscany, who was neither able to face Romuald nor to send him away. Romuald founded several other monasteries, including the monastery of Val di Castro, where he died in 1027.

Romuald’s feast day was not included in the Tridentine Calendar. It was added in 1594 for celebration on 19 June, the date of his death, but in the following year it was transferred by Pope Clement VIII to 7 February, the anniversary of the transfer of his relics to Fabriano in 1481, and in 1969 it was moved back to the day of his death.

In his youth Romuald became acquainted with three major schools of western monastic tradition. Sant’Apollinare in Classe was a traditional Benedictine monastery under the influence of the Cluniac reforms. Marinus followed a much harsher, ascetic and solitary lifestyle, which was originally of Irish eremitic origins.

The abbot of Sant Miguel de Cuxa, Guarinus, had also begun reforms but mainly built upon a third Christian tradition, that of the Iberian Peninsula. Romuald was able to integrate these different traditions and establish his own monastic order. He formed rules for hemits adopting monastic life.

The admonition in his rule Empty yourself completely and sit waiting places him in relation to the long Christian history of intellectual stillness and interior passivity in meditation also reflected in the nearly contemporary Byzantine ascetic practice known as Hesychasm.

Sit in your cell as in paradise. Put the whole world behind you and forget it. Watch your thoughts like a good fisherman watching for fish. The path you must follow is in the Psalms — never leave it.

If you have just come to the monastery, and in spite of your good will you cannot accomplish what you want, take every opportunity you can to sing the Psalms in your heart and to understand them with your mind. And if your mind wanders as you read, do not give up; hurry back and apply your mind to the words once more.

Archbishop Cosmo Francesco Ruppi noted that, “Interiorization of the spiritual dimension, the primacy of solitude and contemplation, slow penetration of the Word of God and calm meditation on the Psalms are the pillars of Camaldolese spirituality, which St. Romuald gives as the essential core of his Rule.” Romuald’s reforms provided a structural context to accommodate both the eremitic and cenobitic aspects of monastic life.

Father, through Saint Romuald you amended the life of seclusion and adoration in the Church. Help us to live in and follow Christ to enjoy the merits of eternal and heavenly life.

We ask this through our Lord Jesus Christ, your Son, who lives and reigns with you and the Holy Spirit, one God, for ever and ever. Amen 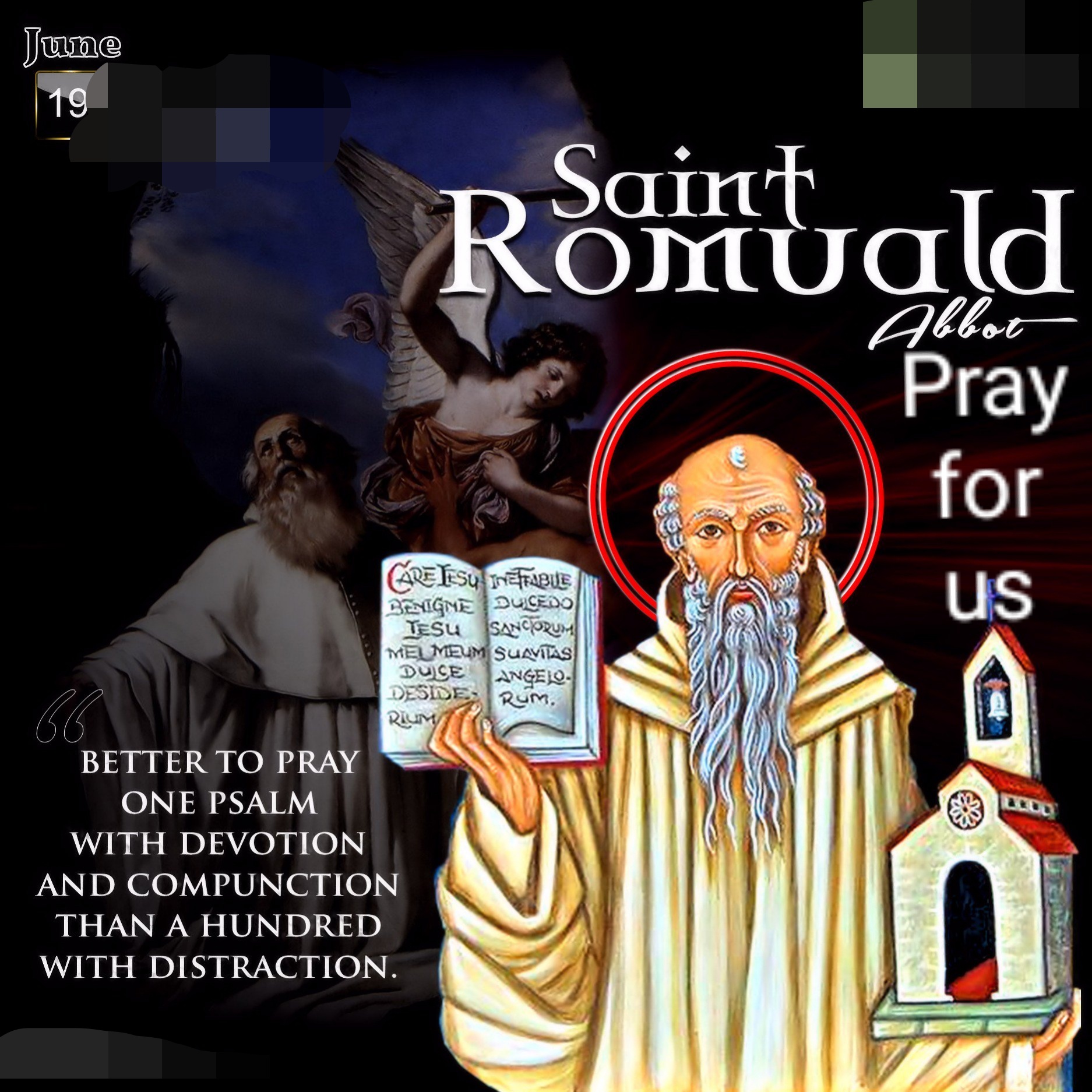 Saint Romuald, pray for us.