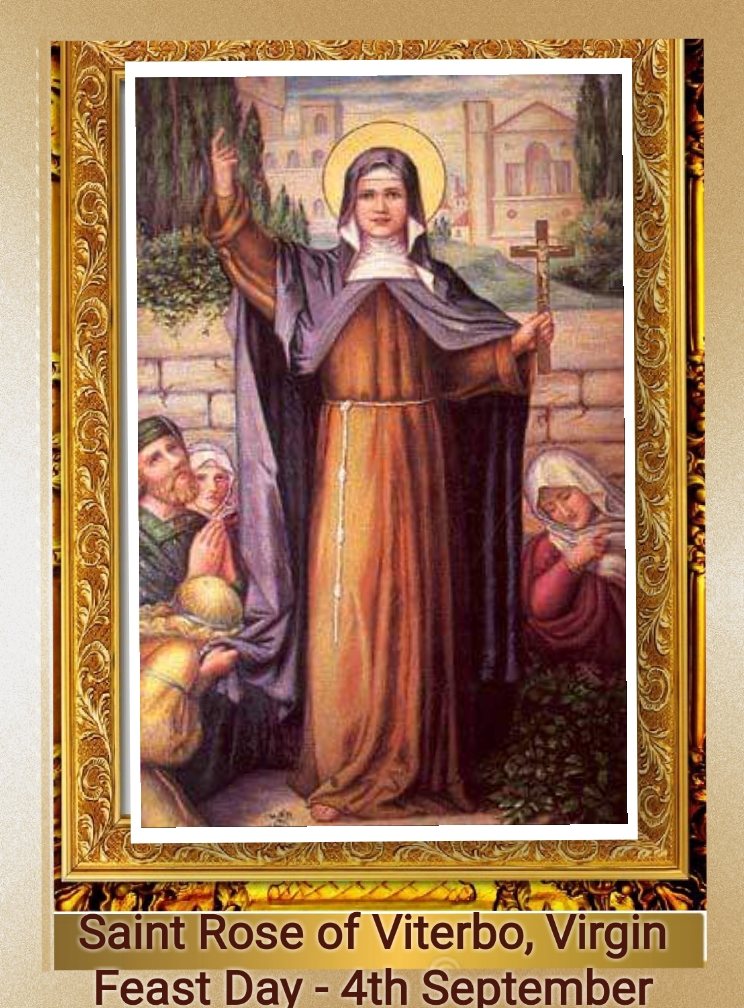 Saint Rose (1235 – 1252) was born in the spring of 1235 at Viterbo, capital of the patrimony of Saint Peter. In those days the emperor Frederick II was oppressing the Church, and many were faithless to the Holy See. But this infant at once seemed filled with grace; she never cried; with tottering steps she sought Jesus in His tabernacle; she knelt before sacred images and listened to sermons and pious conversation, retaining all she heard, and this when she was scarcely three years old. One coarse habit covered her flesh; fasts and disciplines were her delight.

St. Rose was born into a family that was poor but quite devout and she gained a reputation for profound holiness. Her special sanctity was shown when at three years old, she raised her aunt from the dead. As a child she was known for her austere penances and later became a Third Order Franciscan.

Her lively preaching started around age 10 and due to the power of her words, she and her family were temporarily expelled from Viterbo, yet her voice would not be silenced and many souls converted to Christ and His Church. She humbly accepted the rejection she received from a convent she had attempted to join and prophetically said that they would receive her at the convent after she died.

At the age of seven she wished to enter a monastery of nuns; but God had other designs for her, and she resolved to create a solitude in her father’s house, where she would forever spend all her days. Her mortifications there seem incredible to our time of laxity; she gave herself the discipline three times a day until she fainted from fatigue and loss of blood, and she scarcely ate at all. To those who urged her to mitigate her austerities, she explained so perfectly that happiness consists in suffering for God, that no one could doubt this.

Nonetheless she fell ill and nearly died of consumption. She was close to the final agony when suddenly she beheld the Mother of God, and said to those attending her: “All of you here, why do you not greet the Queen of the world? Do you not see Mary, the August Mother of my God, coming forward? Let us go to meet Her, and prostrate ourselves before Her majesty!” Everyone turned toward the door and knelt down, and the Mother of God spoke to Rose, telling her she must enter the Third Order of Saint Francis, then go out to “reprove, convince, exhort and bring back the erring to the paths of salvation.

If your endeavors bring upon you sarcasm and mockery, persecution and labor, you must bear them patiently. Those who assist you will be enriched with all the graces of the Lord.” To defend the Church’s rights was already Rose’s burning wish. When hardly ten years old, she arose after her reception into the Franciscan habit, went down to the public square at Viterbo, called upon the inhabitants to be faithful to the Sovereign Pontiff, and vehemently denounced all his opponents.

She returned to her house only to redouble her flagellations and macerations; she saw her Saviour on the Cross and nothing could arrest her ardor thereafter. So great was the power of her word and of the miracles which accompanied it, that at the end of several months the Imperial party, after threatening her in vain to stop her preaching, in fear and anger drove her from the city. 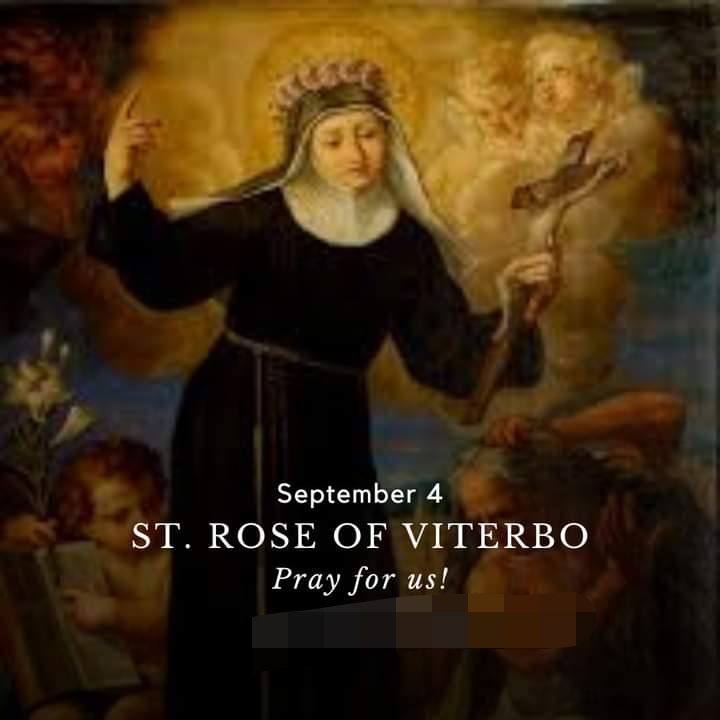 Saint Rose and her parents moved to Soriano, a fortified city, where she continued to do as she had been told by the Mother of God. Then Rose went on by herself to Vitorchiano, where she had understood there was need for her, and continued to win souls by her aspect as much as by her words. She went barefoot and wore a poor tunic at all times, until after some eighteen months, when the emperor had died, she and her parents returned to Viterbo. Innocent IV was brought back in triumph to Rome and the cause of God was won.

A number of young girls came to her for instruction at Viterbo, and she taught them the principles of modest prudence and faithful love of God. Rose fell ill again and recognized that her end was approaching; she prepared, rejoicing, in solitude for her glorious destiny, and died in her eighteenth year. Not long afterward, she appeared in glory to Alexander IV, and bade him to translate her intact body. He found it fragrant and beautiful, as if still in life.

Pope Alexander IV ordered her body laid to rest in the convent that had refused her. For more than 700 years it has remained supple and unchanged, save for its color, darkened after a fire in the chapel where it reposed. She is the Patron saint of people in exile; people rejected by religious orders; Franciscan youth; Viterbo, Italy.

Heavenly Father, Saint Rose gave up everything to devote herself to a life of penance and combined wonderful courage of soul and unsullied innocence. May we imitate the example of her virtues, while celebrating her merits.

Through her intercessory prayers, may we emulate her selfless life on earth and enjoy the fullness of your blessings in heaven. Grant this through our Lord Jesus Christ, your Son, who lives and reigns with you and the Holy Spirit, one God, for ever and ever. Amen 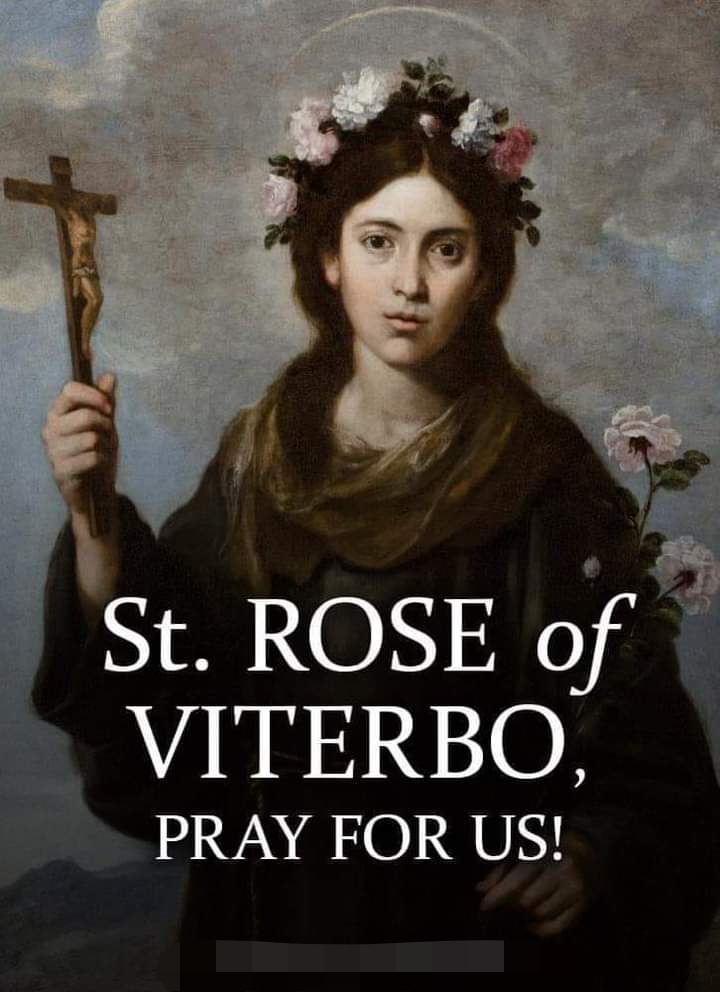 St. Rose of Viterbo, pray for us.