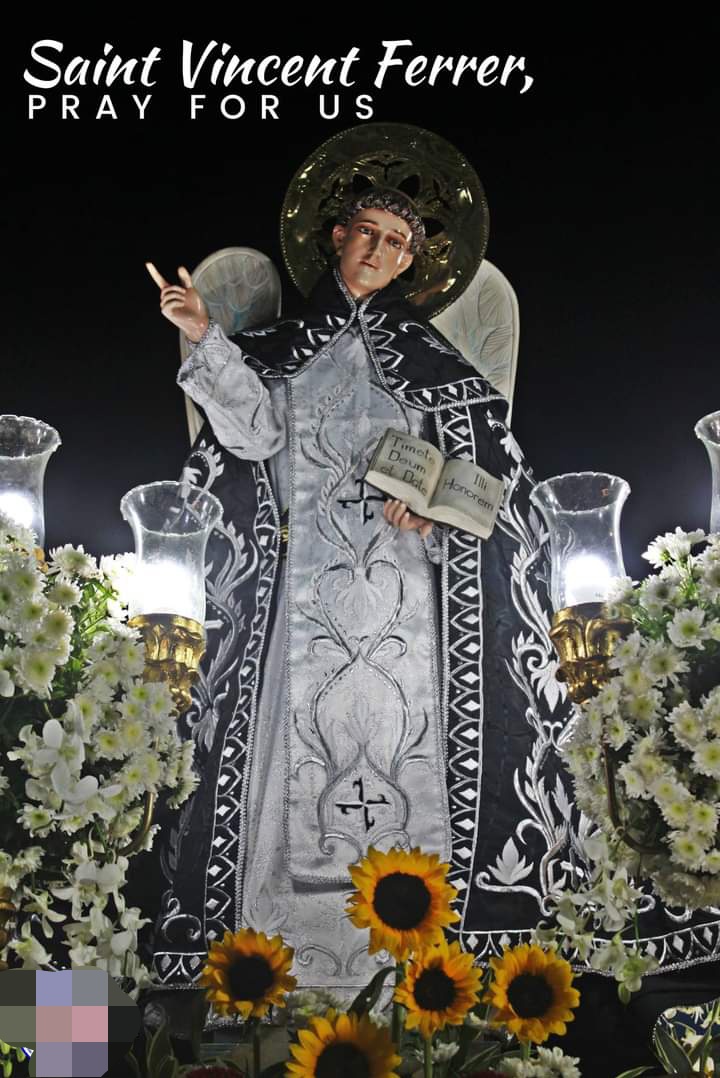 Vincent Ferrer (23 January 1350 – 5 April 1419) was a Valencian Dominican friar and preacher, who gained acclaim as a missionary and a logician. He is honored as a saint of the Catholic Church and other churches of Catholic traditions. Vincent was the fourth child of Guillem Ferrer, a notary from Palamós, and his wife, Constança Miquel, apparently from Valencia itself or Girona.

Legends surround Vincent’s birth. It was said that his father was told in a dream by a Dominican friar that his son would be famous throughout the world. His mother is said never to have experienced pain when she gave birth to him. He was named after Vincent Martyr, the patron saint of Valencia. He would fast on Wednesdays and Fridays and distribute alms to the poor. He began his classical studies at the age of eight, his study of theology and philosophy at fourteen. 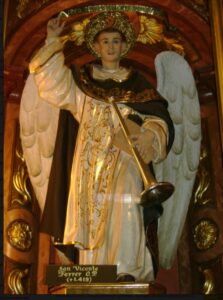 Four years later, at the age of eighteen, Ferrer entered the Order of Preachers, commonly called the Dominican Order, (in England also known as “Black Friars” because of the black cloak they wear over their white habits). As soon as he had entered the novitiate of the Order, though, he experienced temptations urging him to leave. Even his parents pleaded with him to do so and become a secular priest.

He prayed and practiced penance to overcome these trials. Thus he succeeded in completing the year of probation and advancing to his profession. For a period of three years, he read solely Sacred Scripture and eventually committed it to memory. He published a treatise on Dialectic Suppositions after his solemn profession, and in 1379 was ordained a Catholic priest at Barcelona.

He eventually became a Master of Sacred Theology and was commissioned by the Order to deliver lectures on philosophy. He was then sent to Barcelona and eventually to the University of Lleida, where he earned his doctorate in theology. Vincent Ferrer is described as a man of medium height, with a lofty forehead and very distinct features. His hair was fair and his face pale. His voice was strong and powerful, at times gentle, resonant, and vibrant. 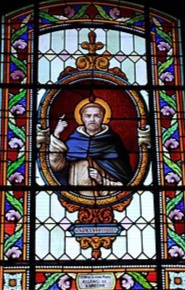 The Western Schism (1378–1417) divided Roman Catholicism between two, then eventually three, claimants to the papacy. Antipope Clement VII lived at Avignon in France, and Pope Urban VI in Rome. Vincent was convinced that the election of Urban was invalid, although Catherine of Siena was just as devoted a supporter of the Roman pope. In the service of Cardinal Pedro de Luna, Vincent worked to persuade Spaniards to follow Clement.

When Clement died in 1394, Cardinal de Luna was elected as the second antipope successor to the Avignon papacy and took the name Benedict XIII. Vincent and his brother Boniface, General of the Carthusians, were loyal to Benedict XIII, commonly known as “Papa Luna” in Castile and Aragon. He worked for Benedict XIII as apostolic penitentiary and Master of the Sacred Palace.

Nonetheless Vincent labored to have Benedict XIII end the schism. When Benedict XIII did not resign as intended at either the Council of Pisa (1409) or the Council of Constance (1414–1418), he lost the support of the French king and of most of his cardinals, and was excommunicated as a schismatic in 1417. Vincent later claimed that the Western Schism had had such a depressing effect on his mind that it caused him to be seriously ill. 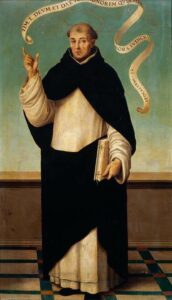 For twenty-one years he was said to have traveled to England, Scotland, Ireland, Aragon, Castile, France, Switzerland, and Italy, preaching the Gospel and converting many. Many biographers believe that he could speak only Catalan, but was endowed with the gift of tongues. He was a noted preacher, and incorporated a popular tone and rhetorical directness into the (by then traditional) Scholastic, thematic sermon structure.

He preached to Colette of Corbie and her nuns, and it was she who told him that he would die in France. Too ill to return to Spain, he did, indeed, die in Brittany in 1419. Breton fishermen still invoke his aid in storms, and in Spain he is the patron of orphanages. Vincent is said to have been responsible for conversion of many Jews to Catholicism, often by questionable means according to the Jewish Encyclopedia.

For instance, he is said to have made their lives difficult until they converted and to have “dedicated” synagogues as churches on the basis of his own authority. One of his converts, a former rabbi by the name of Solomon ha-Levi, went on to become the Bishop of Cartagena and later the Archbishop of Burgos. Vincent is alleged to have contributed to anti-Semitism in Spain, as violence accompanied his visits to towns that had Jewish communities. 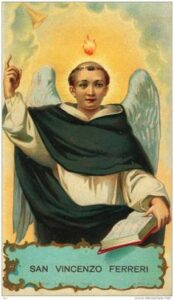 Because of the Spanish’s methods of converting Jews at the time, the means which Vincent had at his disposal were either baptism or spoliation. According to the Catholic Encyclopedia, he won them over by his preaching, estimated at 25,000. Vincent participated in the management of a significant political crisis in his homeland.

King Martin of Aragon died in 1410 without a legitimate heir, and five potential candidates came forth to claim the throne, all with royal bloodlines. It was determined that a committee of nine respected figures, three each from Aragon, Catalonia, and Valencia (the realms comprising the Crown of Aragon), would review the qualifications and select the next king.

Vincent was chosen as one of the representatives of Valencia, and he voted for the Castilian prince Ferdinand of Antequera, who became the next King of Aragon. On June 28, Ferrer publicly proclaimed Ferdinand of Castile as king of Aragon. The process by which Ferdinand was determined to be the next king is known as the Compromise of Caspe. Vincent died on 5 April 1419 at Vannes in Brittany, at the age of 69 and was buried in Vannes Cathedral. 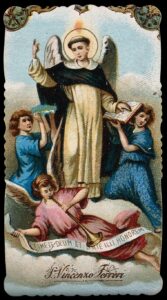 He was canonized by Pope Calixtus III on 3 June 1455. His feast day is celebrated on 5 April. Entities named after him include a pontifical religious institute, the Fraternity of Saint Vincent Ferrer, and two Brazilian municipalities, São Vicente Ferrer, Maranhão, and São Vicente Ferrer, Pernambuco. A 50-metre (164-foot) statue of Ferrer was erected in Bayambang, Philippines, in 2019.

O God, you made St. Vincent a great preacher who converted thousands in several countries. He often said, “If you truly want to help the soul of your neighbor, you should approach God first with all your heart. Ask him simply to fill you with charity, the greatest of all virtues; with it, you can accomplish what you desire.”

So, with the help of his prayers, I ask you, God, to teach me how to evangelize through loving others as you love them. Instill in me a heart that is full of compassion for everyone. Remind me of whom I do not love and guide me into giving them holy, unconditional love. In Jesus’ Name. Amen 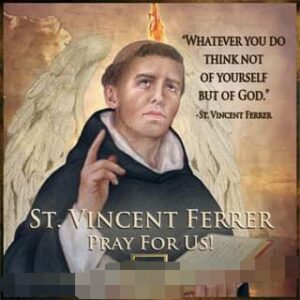 St. Vincent Ferrer, pray for us.