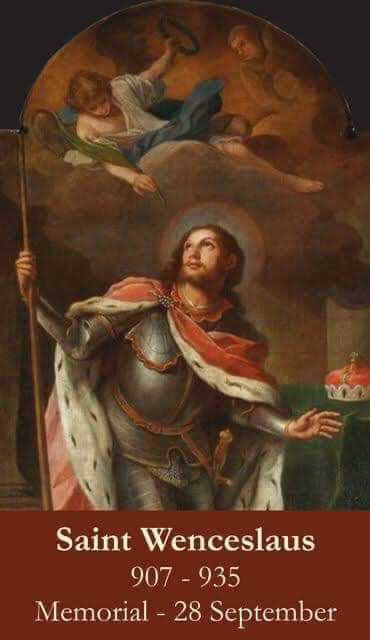 Today’s saint, Wenceslaus, Duke of Bohemia, c. 907 – 929, was felled in a fateful encounter with his brother Boleslaus the Cruel. Wenceslaus was already famous when he died so young and so dramatically, leaving a lasting legacy for his memory to last. He was recognized by the Church as a martyr, posthumously given the title of King, and quickly became an iconic figure to the Bohemian people such that his Feast Day, September 28th, is a national holiday in the modern Czech Republic.

Wenceslaus lived as Christianity was still dawning in central Europe. German missionaries had been laboring for a few generations with success, but underneath the visible layer of a Christian culture there was a substrata of paganism that was rock hard. Central and Eastern Europe were passing through the normal stages of evangelization, as an age-old culture with all its customs and traditions was slowly pushed back by a greater force moving like a glacier. Catholicism had moved into Bohemia by the 900s, but the religious landscape was not yet monolithic. 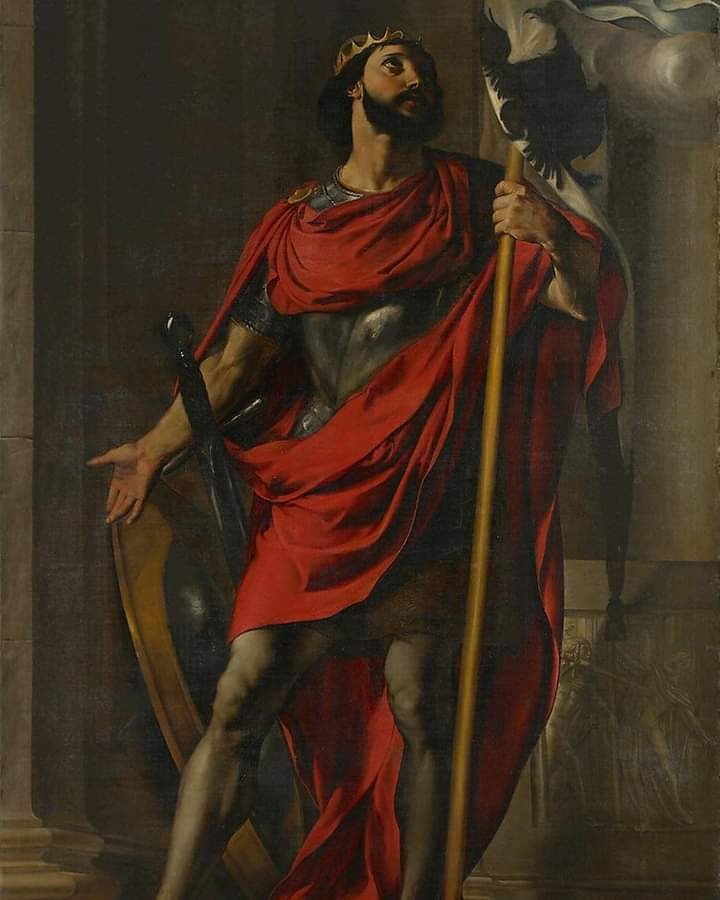 As our martyr’s death attests, religious and political divisions ran cracks through the culture. The grandfather of Wenceslaus may have been converted by no less than Saints Cyril and Methodius themselves. His grandmother Ludmila was an ardent Catholic and oversaw Wenceslaus’ excellent education in which he learned to read and write both Slavonic and Latin. Wenceslaus’ mother, Drahomira, clung to the old ways, though she was nominally a Christian.

When Drahomira thought Ludmila was encouraging Wenceslaus to assume power as a teen, Drahomira had her mother-in-law strangled to death with her own veil. Once he did take power, Wenceslaus banished his own mother, solidified control of western Bohemia, and became an honorable ruler. He followed the law, favored education, and promoted the form of Christianity practiced in Germany, not in the east. 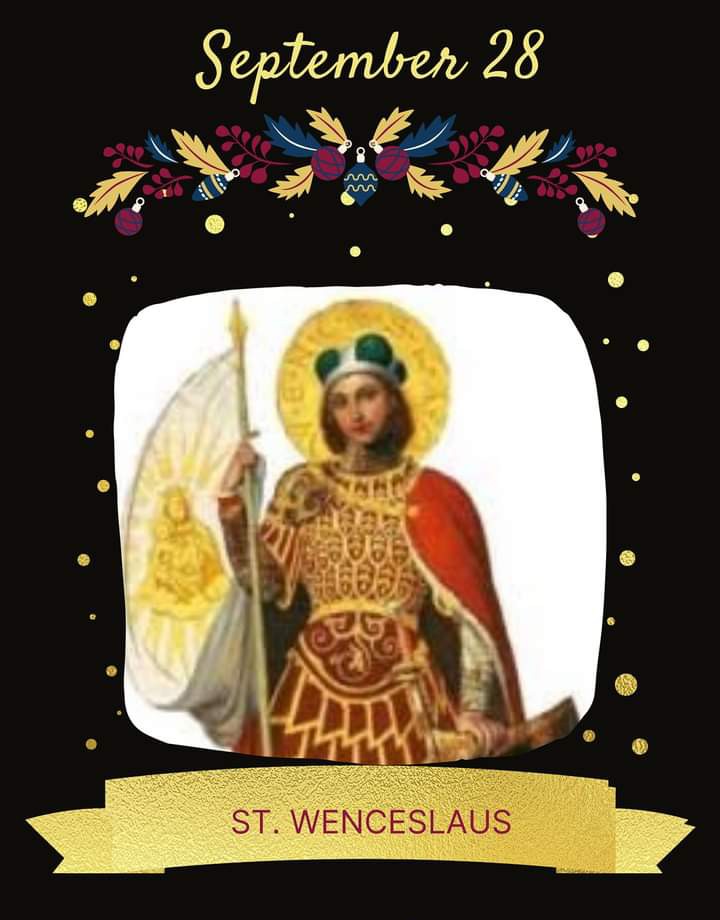 This was a fateful decision. Poland, the Czech Republic, and Slovakia are Slavic peoples of the Latin Rite, unlike their Orthodox and Byzantine Rite Slavic cousins just to the east. Wenceslaus was pro-Western theologically and liturgically, while retaining his Slavic identity and independence in other essential matters. This pattern was to endure, giving Slavic Catholicism its unique features.

But for all of Wenceslaus’ brief successes, in the shadows lurked Boleslaus, creating a power center in eastern Bohemia. When Wenceslaus’ wife gave birth to a son, Boleslaus knew he would not succeed his brother, so he plotted his murder. Boleslaus and his henchman struck down the young duke Wenceslaus in 929 on the Feast of Saints Cosmas and Damian and on the Vigil of Saint Michael the Archangel.

“Brother, may God forgive you” were our martyr’s last words. A young duke, killed by a jealous brother became a Czech icon. Saint Wenceslaus is Patron Saint of the Czech Republic and Slovakia. 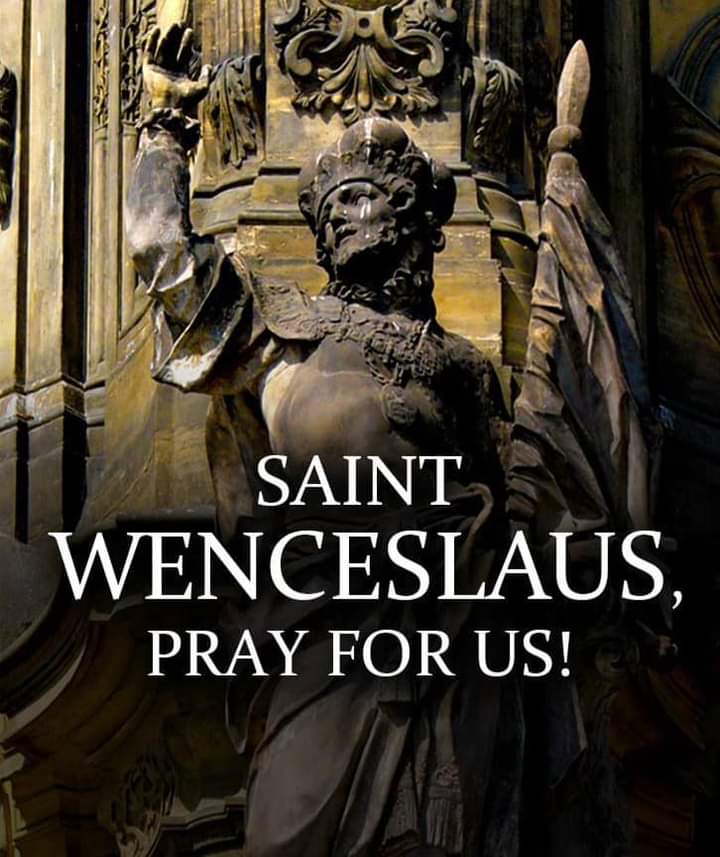 Saint Wenceslaus, you were the epitome of a just and compassionate leader in your brief reign. You saw it as your sacred duty to glorify the true God and and uphold His religion. Help all rulers and leaders to see morality, liturgy, prayer, and catechesis as the bedrock of a just society.

You forgave your brother the same way Christ forgave humanity. May you occupy a princely seat in the Kingdom of God. Amen 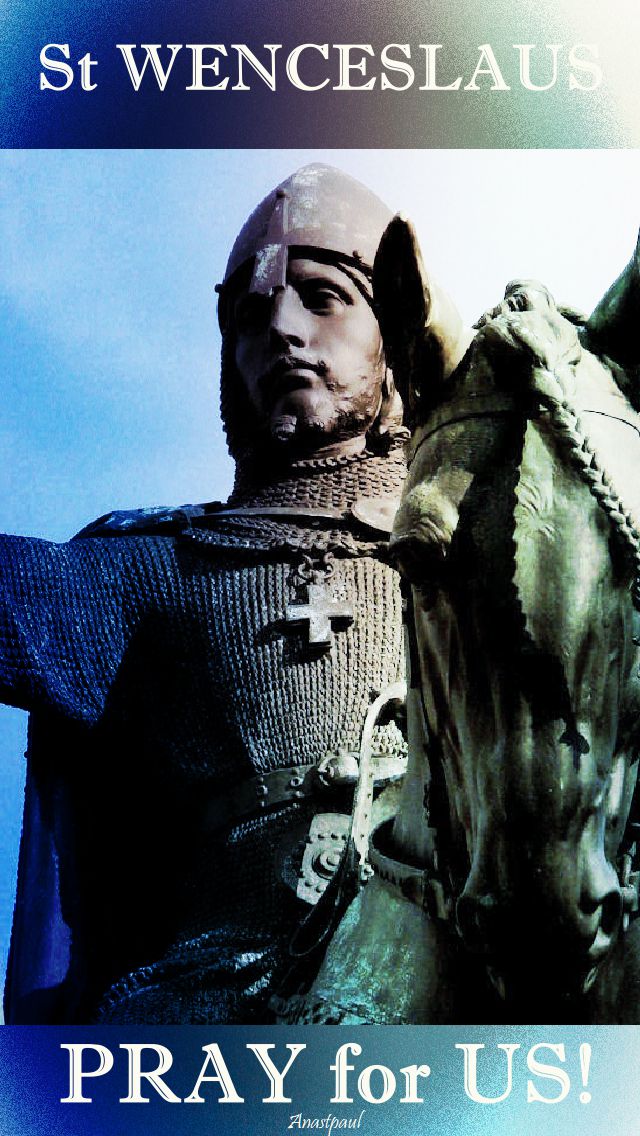