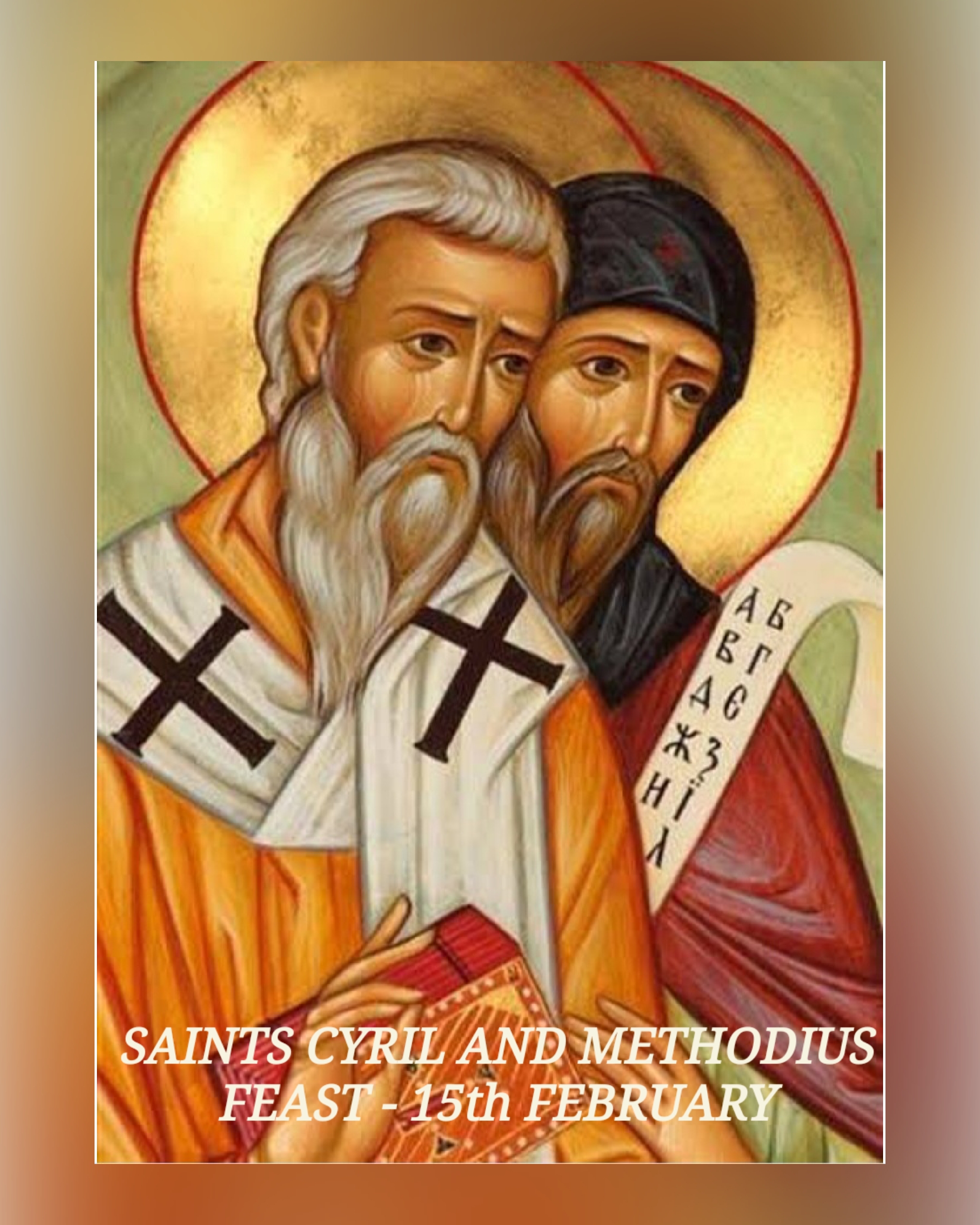 Cyril (born Constantine, 826–869) and Methodius (815–885) were two brothers and Byzantine Christian theologians and missionaries. For their work evangelizing the Slavs, they are known as the “Apostles to the Slavs”. They are credited with devising the Glagolitic alphabet, the first alphabet used to transcribe Old Church Slavonic. Both brothers are venerated in the Eastern Orthodox Church as saints with the title of “equal-to-apostles”.

The two brothers were born in Thessalonica, then located in a Byzantine province with the same name. Cyril was reputedly the youngest of seven brothers. Methodius was born Michael and was given the name Methodius upon becoming a monk in Polychron Monastery at Mysian. The two brothers lost their father when Cyril was fourteen, and the powerful minister Theoktistos, who was one of the chief ministers of the Empire, became their protector. He was also responsible, along with the regent Bardas, for initiating a far-reaching educational program within the Empire which ended in the establishment of the University of Magnaura, where Cyril was to teach.

Cyril was ordained as priest some time after his education, while his brother Methodius remained a deacon until 867/868. About the year 860, Byzantine Emperor Michael III and the Patriarch of Constantinople Photius (a professor of Cyril’s at the University and his guiding light in earlier years), sent Cyril on a missionary expedition to the Khazars who had requested a scholar be sent to them who could converse with both Jews and Saracens. It has been claimed that Methodius accompanied Cyril on the mission to the Khazars.

After his return to Constantinople, Cyril assumed the role of professor of philosophy at the University while his brother had by this time become a significant figure in Byzantine political and administrative affairs, and an abbot of his monastery. In 862, the brothers began the work which would give them their historical importance. That year Prince Rastislav of Great Moravia requested that Emperor Michael III and the Patriarch Photius send missionaries to evangelize his Slavic subjects.

His motives in doing so were probably more political than religious. It is a common misconception that Cyril and Methodius were the first to bring Christianity to Moravia, but the letter from Rastislav to Michael III states clearly that Rastislav’s people were already adhering to the Christian law. Rastislav is said to have expelled missionaries of the Roman Church and instead turned to Constantinople for ecclesiastical assistance and also, presumably, some political support.

The Emperor quickly chose to send Cyril, accompanied by his brother Methodius. The request provided a convenient opportunity to expand Byzantine influence. Their first work seems to have been the training of assistants. In 863, they began the task of translating the Gospels and necessary liturgical books into the language now known as Old Church Slavonic and traveled to Great Moravia to promote it. They enjoyed considerable success in this endeavour. However, they came into conflict with German ecclesiastics who opposed their efforts to create a specific Slavic liturgy.

For the purpose of this mission, they devised the Glagolitic alphabet, the first alphabet to be used for Slavonic manuscripts, suited to match the specific features of the Slavic language.
The brothers wrote the first Slavic Civil Code, which was used in Great Moravia. The language derived from Old Church Slavonic, known as Church Slavonic, is still used in liturgy by several Orthodox Churches and also in some Eastern Catholic churches.

It is impossible to determine with certainty exactly what the brothers translated. The New Testament and the Psalms seem to have been the first, followed by other lessons from the Old Testament. Nor is it known for sure which liturgy, that of Rome or that of Constantinople, they took as a source. In any case, the circumstances were such that the brothers could hope for no permanent success without obtaining the authorization of Rome.

Cyril and Methodius were dedicated to the ideal of expression in a people’s native language. In the East, it was a normal procedure to translate liturgy into the vernacular. As we know, in the West the custom was to use Greek and later Latin, until Vatican II. The German hierarchy, which had power over Moravia, used this difference to combat the brothers’ influence. The German priests knew that language has a great deal to do with independence.

So when Cyril and Methodius went to Rome to have the Slav priesthood candidates ordained (neither was a bishop at the time), they had to face the criticism the Germans had leveled against them. But if the Germans had motives that differed from spiritual concerns, so did the pope. He was concerned about the Eastern church gaining too much influence in the Slavic provinces. Helping Cyril and Methodius would give the Roman Catholic church more power in the area. So after speaking the brothers, the pope approved the use of Slavonic in services and ordained their pupils.

Cyril never returned to Moravia. He died in Rome after assuming the monastic robes and the change of his name from Constantine to Cyril on February 14, 869. Legend tells us that his older brother was so griefstricken, and perhaps upset by the political turmoil, that he intended to withdraw to a monastery in Constantinople. Cyril’s dying wish, however, was that Methodius return to the missionary work they had begun.

He couldn’t return to Moravia because of political problems there, but another Slavic prince, Kocel, asked for him, having admired the brothers’ work in translating so much text into Slavonic. Methodius was allowed by the pope to continue saying Mass and administering baptism in the Slavonic tongue. Methodius was consecrated bishop of Sirmium, an ancient see near Belgrade and given power over Serbo-Croatian, Slovene, and Moravian territory.

The German bishops accused him of infringing on their power and imprisoned him in a monastery. This lasted until Germany suffered military defeats in Moravia. At that time the pope intervened and Methodius returned to his diocese in triumph at the same time the Germans were forced to recognize Moravian independence. To appease the Germans a little, the pope told Methodius he could no longer celebrate liturgy in the vernacular.

In 879 Methodius was summoned to Rome to answer German charges he had not obeyed this restriction. This worked against the Germans because it gave Methodius a chance to explain how important it was to celebrate the liturgy in the tongue people understood. Instead of condemning him, the pope gave him permission to use Slavonic in the Mass, in Scripture reading, and in the office. He also made him head of the hierarchy in Moravia.

The criticism never went away, but it never stopped Methodius either. It is said that he translated almost all the Bible and the works of the Fathers of the Church into Slavonic before he died on April 6 in 884. Within twenty years after his death, it would seem like all the work of Cyril and Methodius was destroyed.
Magyar invasions devastated Moravia. And without the brothers to explain their position, use of the vernacular in liturgy was banned. But politics could never prevail over God’s will. The disciples of Cyril and Methodius continued their work of spreading Christ’s word and translating it into Slavonic, and laid the foundation for Christianity in the region.

What began as a request guided by political concerns produced two of the greatest Christian missionaries, revered by both Roman Catholic and Eastern Orthodox churches, and two of the fathers of Slavonic literary culture.
Cyril and Methodius believed in the importance of celebrating liturgy in one’s own language. In 1880, Pope Leo XIII introduced their feast into the calendar of the Roman Catholic Church. In 1980, Pope John Paul II declared them co-patron saints of Europe, together with Benedict of Nursia.

Father, you brought the light of the gospel to the Slavic nations through the brothers, Saints Cyril and Methodius. Open our hearts to understand your teaching and help us to become one in faith and praise. 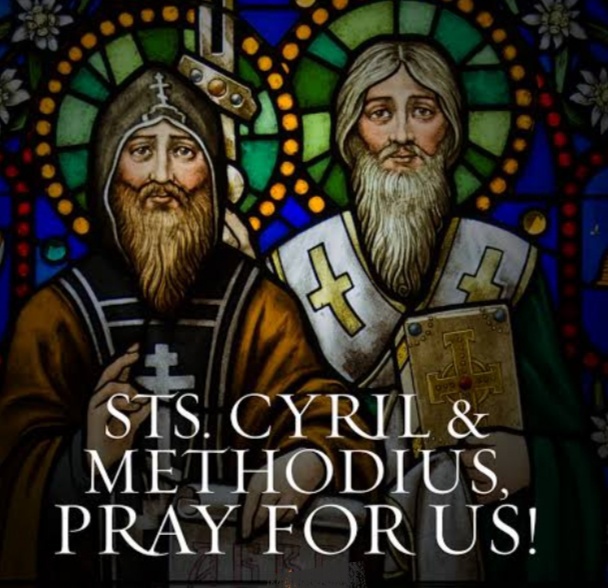 Saints Cyril and Methodius, watch over all missionaries, especially those in Slavic countries, who are in danger in the troubled areas. Watch over the people you dedicated your lives to. Amen