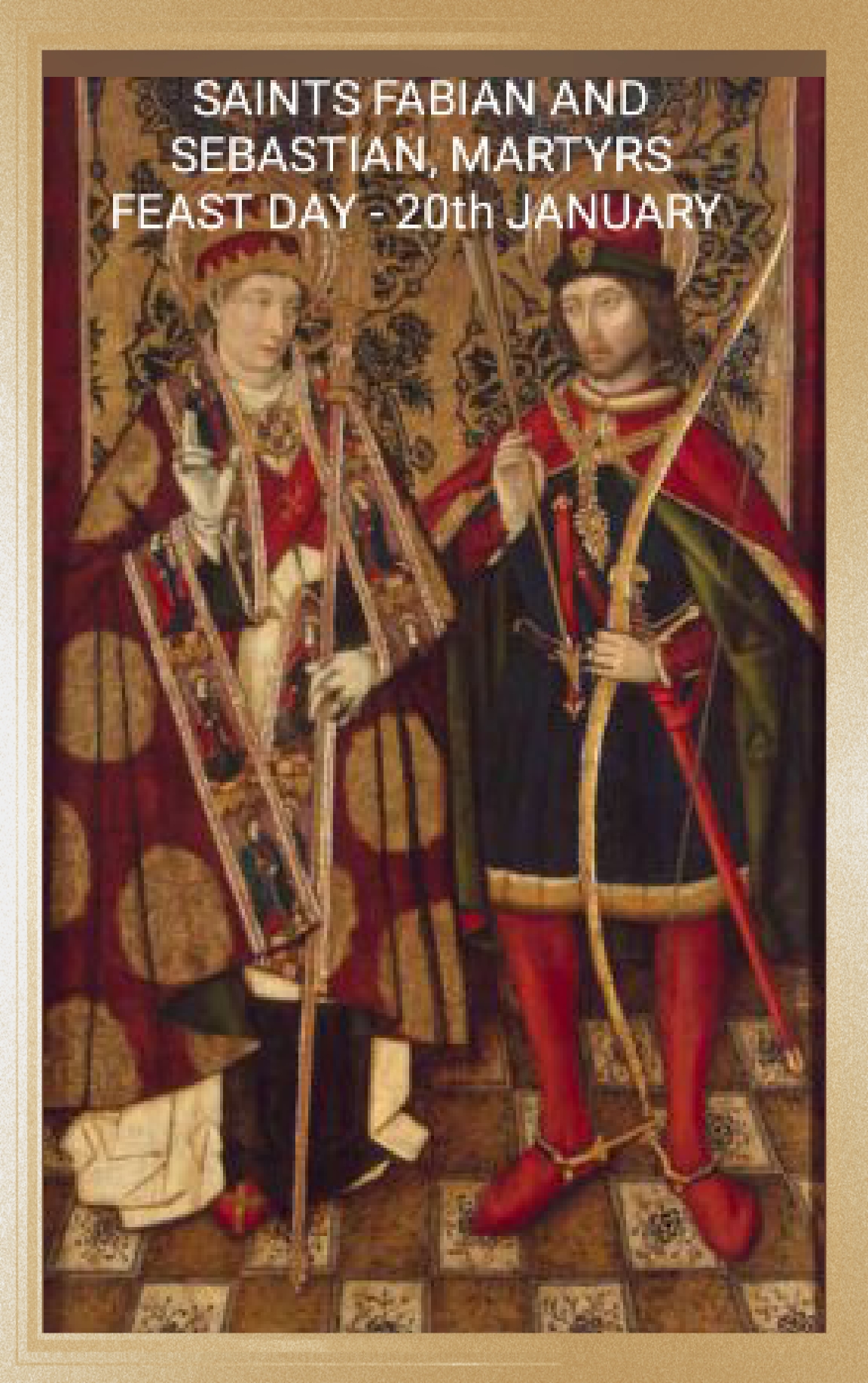 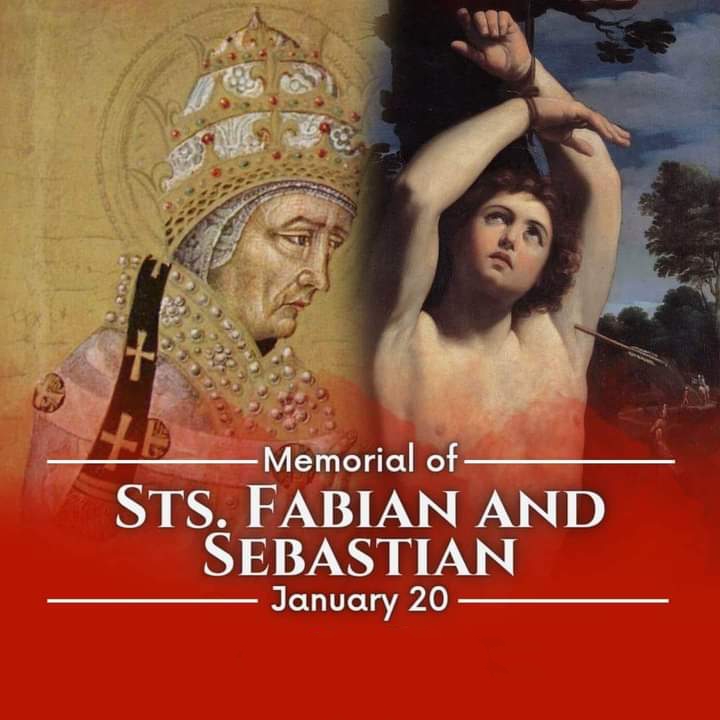 Most of Fabian’s papacy was characterized by amicable relations with the imperial government, and the schism between the Roman congregations of Pontian and Hippolytus was ended. He divided Rome into diaconates and appointed secretaries to collect the records of the martyrs. He sent out seven “apostles to the Gauls” as missionaries, but probably did not baptize Emperor Philip the Arab as is alleged. He died a martyr at the beginning of the Decian persecution and is venerated as a saint by the Catholic Church.

According to the Liber Pontificalis, Fabian was a noble Roman by birth, and his father’s name was Fabius. Nothing more is known about his background. The legend of the circumstances of his election is preserved by the fourth-century writer Eusebius of Caesarea (Church History, VI. 29). After the short reign of Pope Anterus, Fabian had come to Rome from the countryside when the new papal election began. “Although present”, says Eusebius, Fabian “was in the mind of none”. While the names of several illustrious and noble churchmen were being considered over the course of thirteen days, a dove suddenly descended upon the head of Fabian.

To the assembled electors, this strange sight recalled the gospel scene of the descent of the Holy Spirit on Jesus at the time of his baptism by John the Baptist. The congregation took this as a sign that he was marked out for this dignity, and Fabian was at once proclaimed bishop by acclamation. During Fabian’s reign of 14 years, there was a lull in the storm of persecution which had resulted in the exile of both Anterus’ predecessor Pontian and the antipope (and later saint) Hippolytus. Fabian had enough influence at court to effect the return of the bodies of both of these martyrs from Sardinia, where they had died at hard labor in the mines.

According to the sixth-century historian Gregory of Tours, Fabian sent out the “apostles to the Gauls” to Christianise Gaul in A.D. 245. Fabian sent seven bishops from Rome to Gaul to preach the Gospel: Gatianus of Tours to Tours, Trophimus of Arles to Arles, Paul of Narbonne to Narbonne, Saturnin to Toulouse, Denis to Paris, Austromoine to Clermont, and Martial to Limoges. He also condemned Privatus, the originator of a new heresy in Africa.

The Liber Pontificalis says that Fabian divided the Christian communities of Rome into seven districts, each supervised by a deacon. Eusebius adds that he appointed seven subdeacons to help collect the acta of the martyrs—the reports of the court proceedings on the occasion of their trials. There is also a tradition that he instituted the four minor clerical orders: porter, lector, exorcist, and acolyte. However most scholars believe these offices evolved gradually and were later formally instituted.

With the advent of Emperor Decius, the Roman government’s tolerant policy toward Christianity temporarily ended. Decius ordered everyone in the Empire, with the exception of Jews, to demonstrate their loyalty to Rome by offering incense to the cult images of deities which represented the Roman state. This was unacceptable to many Christians, who, while no longer holding most of the laws of the Old Testament to apply to them, took the commandment against idolatry with dead seriousness. Fabian was thus one of the earliest victims of Decius, dying as a martyr on 20 January 250, at the beginning of the Decian persecution, probably in prison rather than by execution. The Coptic Orthodox Church teaches that Fabian was martyred twice in one week.

Fabian was buried in the catacomb of Callixtus in Rome. His remains were later reinterred at San Sebastiano fuori le mura by Pope Clement XI where the Albani Chapel is dedicated in his honour. His feast day is commemorated on 20 January, the same as Saint Sebastian. The church of Santi Fabiano e Venanzio a Villa Fiorelli (1936) in Rome is named in his honour, and also in that of Saint Venantius of Camerino who died in the same persecutions. Fabian was highly esteemed by Cyprian, who calls him incomparable, saying that the glory of his martyrdom answered the purity of his life. O God, glory of your Priests, grant we pray, that, helped by the intercession of your Martyr Saint Fabian, we may make progress by communion in the faith and by worthy service.

The first known account of Sebastian’s life and death is the Passio Sancti Sebastiani, thought to have been written by Ambrose of Milan in the 4th century, but now regarded as a 5th-century account by an unknown author. He was taught in Mediolanum (Milan). In 283, Sebastian entered the army in Rome under Emperor Carinus to assist the martyrs. His courage helped him become one of the captains of the Praetorian Guards under Diocletian and Maximian, who were unaware that he was a Christian.

According to tradition, Marcus and Marcellianus were twin brothers from a distinguished family and were deacons. They refused to sacrifice to the Roman gods and were arrested. They were visited by their parents Tranquillinus and Martia in prison, who attempted to persuade them to renounce Christianity. Sebastian succeeded in converting them, as well as Saint Tiburtius, the son of Chromatius, the local prefect. Another official, Nicostratus, and his wife Zoe were also converted. Zoe had been a mute for six years and she made known to Sebastian her desire to be converted. As soon as she had, her speech was restored. Nicostratus then brought the rest of the 16 prisoners, who were also converted.

Chromatius and Tiburtius too converted. Chromatius set all of his prisoners free from jail, resigned his position, and retired to the country in Campania. Marcus and Marcellianus, after being concealed by a Christian named Castulus, were later martyred, as were Nicostratus, Zoe, and Tiburtius. Sebastian had prudently concealed his faith, but in 286 it was detected. Diocletian reproached him for his supposed betrayal, commanded him to be led to a field, to be bound to a stake so that the chosen archers from Mauretania would shoot arrows at him. The archers shot at him till he was full of arrow pricks, and left him there for dead. Miraculously, the arrows did not kill him. The widow of Castulus, Irene of Rome, went to retrieve his body to bury it, and discovered he was alive. Bringing him to her house, she nursed him to health.

Sebastian later stood by a staircase where the emperor was to pass and harangued Diocletian for his cruelties against Christians. This freedom of speech, and from a person whom he supposed to have been dead, greatly astonished the emperor; but recovering from his surprise, he gave orders for Sebastian to be seized and beaten to death with cudgels, and his body thrown into the common sewer. A pious lady, named Lucina, admonished by the martyr in a vision, privately removed the body and buried it in the catacombs at the entrance of the cemetery of Calixtus, where the Basilica of St. Sebastian now stands.

Remains reputed to be those of Sebastian are housed in Rome in the Basilica Apostolorum, built by Pope Damasus I in 367 on the site of the provisional tomb of Saints Peter and Paul. The church, today called San Sebastiano fuori le mura, was rebuilt in the 1610s under the patronage of Scipione Borghese. St. Ado, Eginard, Sigebert, and other contemporary authors relate that, in the reign of Louis Debonnair, Pope Eugenius II gave the body of St. Sebastian to Hilduin, Abbot of St. Denys, who brought it into France, and deposited it at Saint Medard Abbey, at Soissons, on 8 December, in 826.

Sebastian’s cranium was brought to the town of Ebersberg (Germany) in 934. A Benedictine abbey was founded there and became one of the most important pilgrimage sites in southern Germany. It is said the silver-encased cranium was used as a cup in which to present the consecrated wine of the Blessed Sacrament to the faithful during the feast of Saint Sebastian. The belief that Saint Sebastian was a defense against the plague was a medieval addition to his reputation, which largely accounts for the enormous increase in his importance in the Late Middle Ages.

The chronicler Paul the Deacon relates that, in 680, Rome was freed from a raging pestilence by him. The Golden Legend transmits the episode of a great plague that afflicted the Lombards in the time of King Gumburt, which was stopped by the erection of an altar in honor of Sebastian in the Church of Saint Peter in the Province of Pavia. In the Roman Catholic Church, Sebastian is commemorated by an optional memorial on 20 January. As a protector from the bubonic plague, he was formerly one of the Fourteen Holy Helpers. 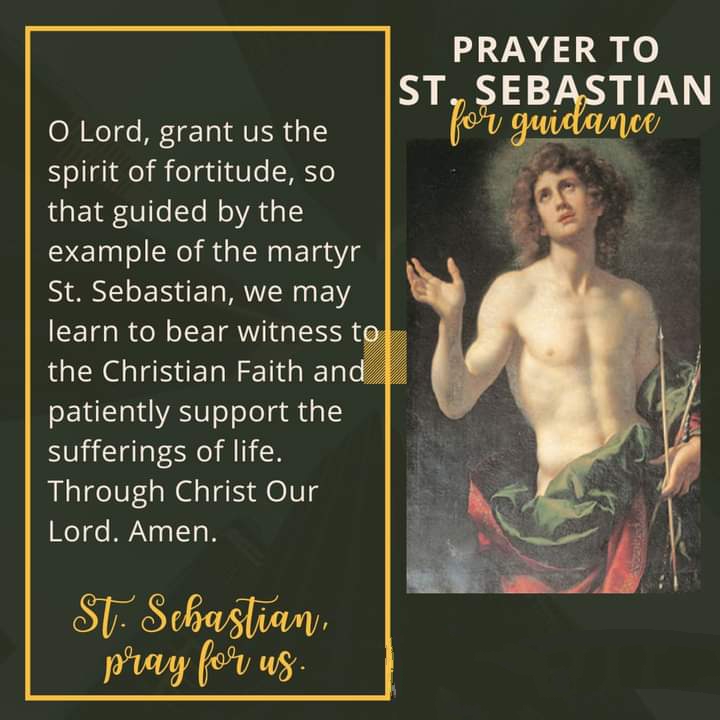 Glorious St Sebastian, who enjoy God’s favour, you gave to us by your life of prayer, sacrifice, suffering and martyrdom, a splendid example of holiness. St Sebastian, you so often avert illnesses and pestilences by your intercession, and are a powerful helper in the battles against sin, lukewarmness, loose morals and human respect.

We now beseech you with childlike confidence, to make us strong and joyful in faith, perseverance, obtain for us to be humble and content in living a simple, orderly life that is pleasing in the sight of the Almighty. Protect us from sin, from obvious and from secret vices and passions. Strengthen us in our service for God, our fellow men and our country and, by your prayers, lead us all into our eternal country. Amen 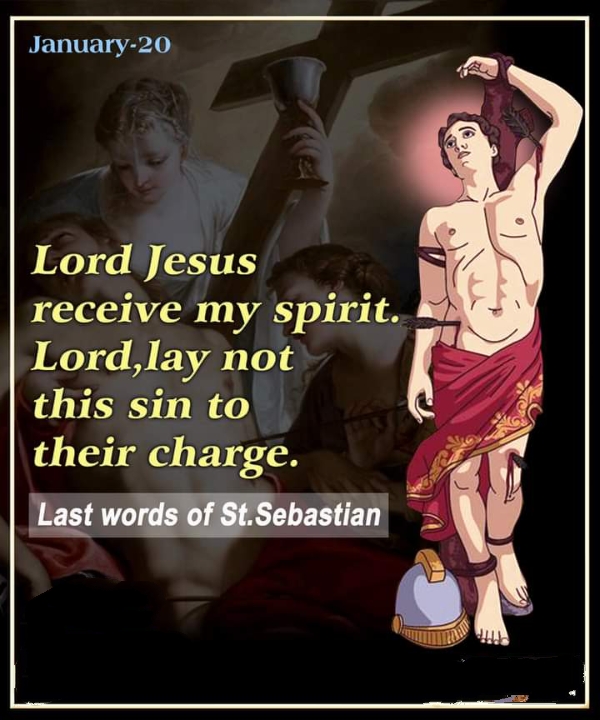 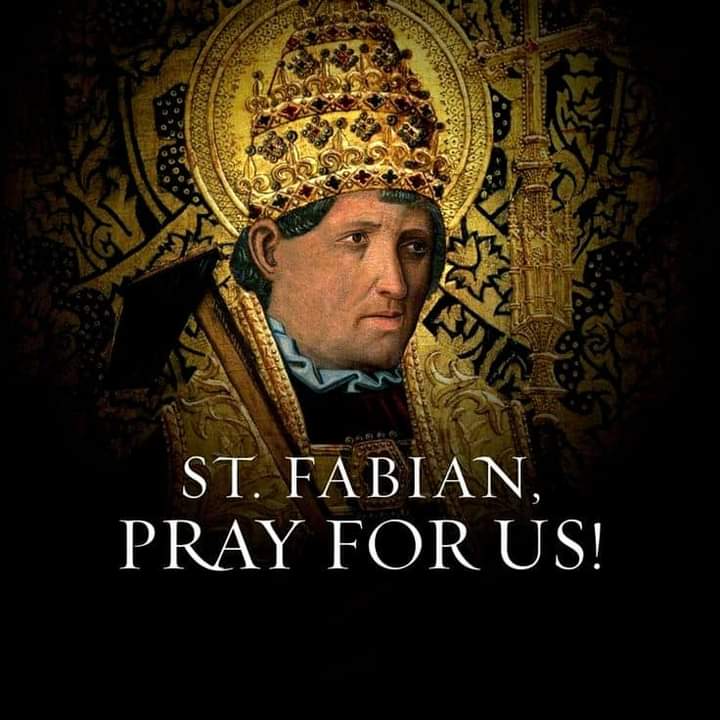 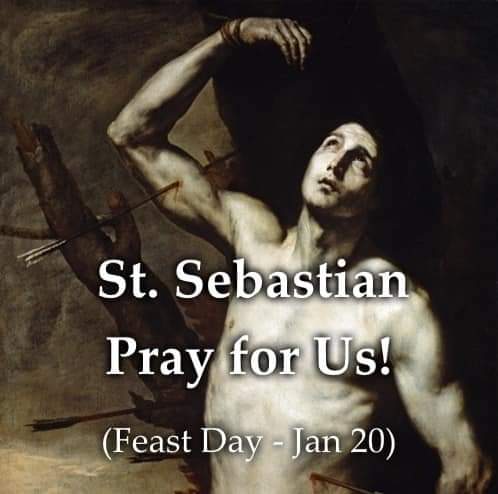