FEAST OF SAINTS PHILIP AND JAMES THE LESSER, APOSTLES – 3rd MAY 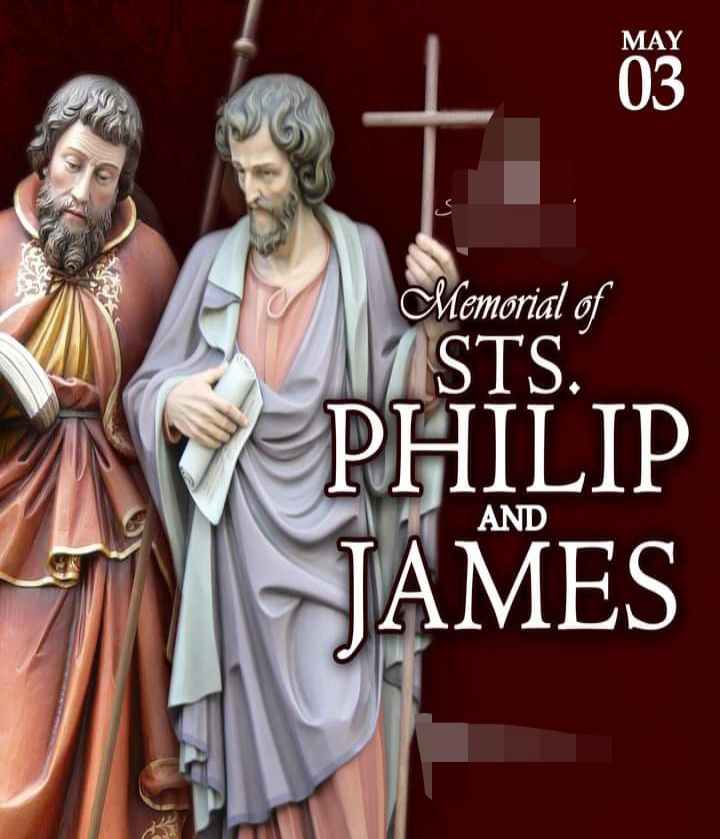 Little is known of the these two men except that they had been listed among the Twelve. Philip, we know, came from Bethsaida and his appearances in the Gospels are episodes which portray him as a gatekeeper, one who connects people with Jesus. His few pieces of discourse also unwittingly make Jesus reveal something significant about his identity as being One with the Father and as the Way, the Truth and the Life.

Philip’s prayer makes a good prayer of faith for all of us: “Lord, show us the Father and that will be enough for us.” Jesus’ response may sound tired and exasperated “Philip, I have been with you all this time and you still do not know me? I and the Father are one,” but Philip’s statement was no more unknowing than “Lord, I believe, help my unbelief.”

For many of us, it takes a while to understand and it takes even a longer while to believe. For people like us, Ignatius’ counsel is to always touch base with our deep desires and if our deep desire be that of Philip’s “show us the Father” that should really be enough to get us through. 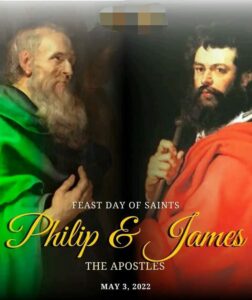 Some commentators say that his pairing with Philip in the celebration of the apostles’ feasts are an attempt to extol to virtues of faith and works, faith being attributed to Philip and works to James, alluding to the Epistle of James. But other scholars would not identify James the Less with James the author of the epistle who was most probably the Bishop James or James the Just.

Biblical characters are not often as clear as we want them for a big part of their history is unknown to us. For now it is good to note that for Philip and James, the dignity of becoming apostles did not lie on any human achievement or stature of theirs but to gratuitous providence of God, the inner power of love from all apostolic calls to service derives.

Ultimately it is not as important to project who they were in the early Church although we know they became shepherds of their communities, but that they served to proclaim Jesus, the Way of Truth and Life and so allow Jesus to gather all back to the Father. 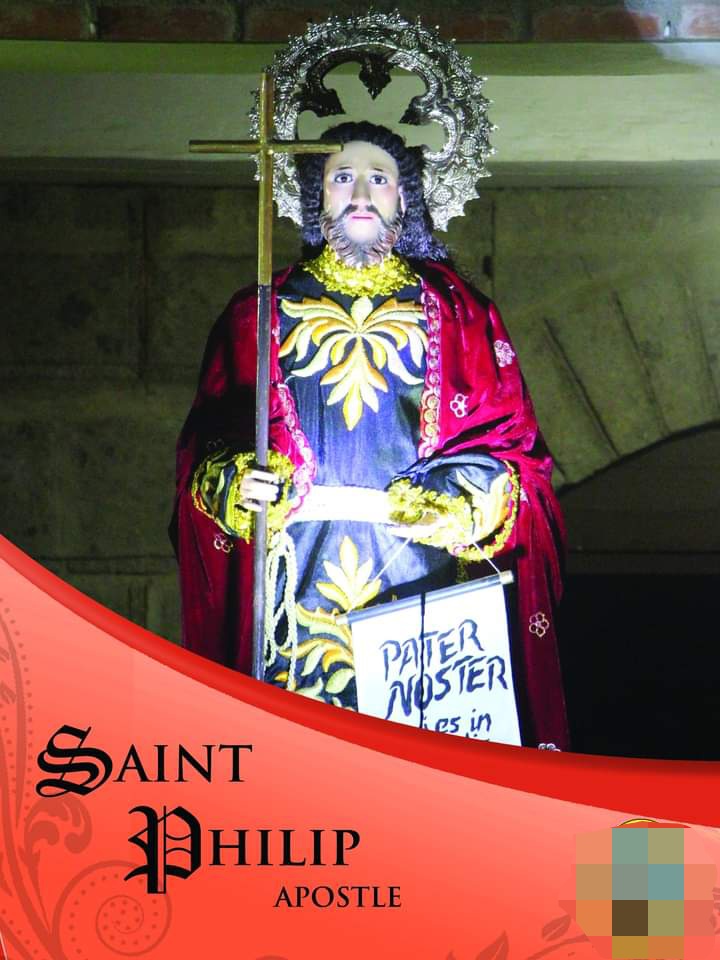 Like Sts. Peter and Andrew, St. Philip was from Bethsaida, in Galilee. According to tradition he was crucified at Hierapolis in Phrygia, where he had preached the Gospel. He introduced St. Bartholomew (Nathanael) to Christ. Christ declared to St. Philip, “Whoever has seen me has seen the Father… I am in the Father and the Father is in me” (Jn. 14:8, 11).

Philip was one of the first chosen disciples of Christ. On the way from Judea to Galilee Our Lord found Philip, and said, “Follow Me” Philip straightway obeyed; and then in his zeal and charity sought to win Nathaniel also, saying, “We have found Him of Whom Moses and the prophets did write, Jesus of Nazareth;” and when Nathaniel in wonder asked, “Can any good come out of Nazareth?” Philip simply answered, “Come and see,” bringing him to Jesus.

Another characteristic saying of this apostle is preserved for us by St. John. Christ in His last discourse had spoken of His Father; and Philip exclaimed, in the fervor of his thirst for God, “Lord, show us the Father, and it is enough”

He is the Patron of Hatters, Luxembourg, pastry chefs, Uruguay. 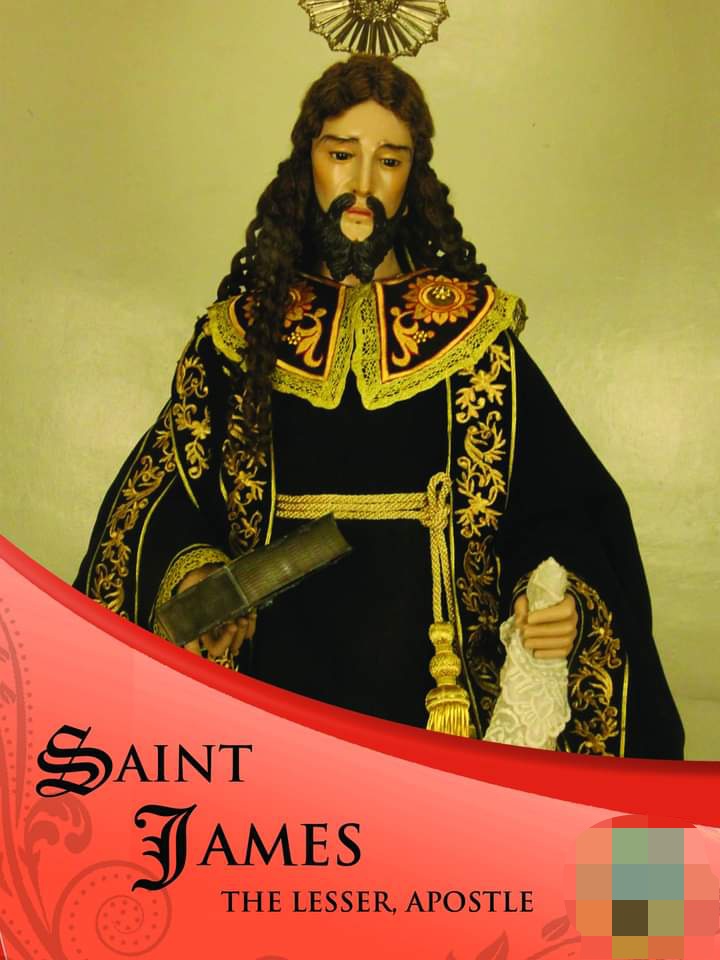 St. James was a cousin of of Our Lord. He is often called St. James the Less because of St. Mark’s reference to him as “the younger” (Mk. 15:40). While Bishop of Jerusalem, St. James wrote an Epistle of the New Testament. He was thrown from the terrace of the Temple and then stoned to death.

St. James the Less, was also the brother of the Apostle Jude, and was of Cana of Galilee. He is regarded as the author of one of the Catholic Epistles in the New Testament. He was favored by an appearance of the Risen Christ (I Cor. 15:7).

After the dispersion of the Apostles he was made Bishop of Jerusalem. He was visited by St. Paul (Gal. 1:19). He spoke after Peter at the meeting of the Apostles (Acts 15:13). When he refused to deny the Divinity of Christ, the Jews cast him down from the terrace of the temple and clubbed him to death.

The Breviary contains a description of his death. “When he was ninety-six years old and had governed the Church for thirty years in a most holy manner, the Jews sought to stone him, then took him to the pinnacle of the temple and cast him off headlong. As he lay there half dead, with legs broken by the fall, he lifted his hands toward heaven and prayed to God for the salvation of his enemies, saying: Lord, forgive them for they know not what they do!

While the apostle was still praying, a fuller struck his head a mortal blow.” His relics now rest next to those of St. Philip in the church of the Holy Apostles in Rome, and their names are mentioned in the first list in the Canon of the Mass. Patron of Apothecaries, druggists, dying people, fullers, hatmakers, hatters, milliners, pharmacists, Uruguay.

(Excerpted from Homily of Fr. Vic and The Church’s Year of Grace, Pius Parsch) 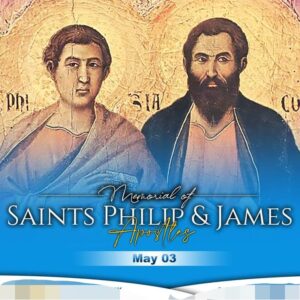 O God, who gladden us each year with the feast day of the Apostles Philip and James, grant us, through their prayers, a share in the Passion and Resurrection of your Only Begotten Son, so that we may merit to behold you for eternity. Through our Lord Jesus Christ, your Son, who lives and reigns with you in the unity of the Holy Spirit, one God, for ever and ever. Amen 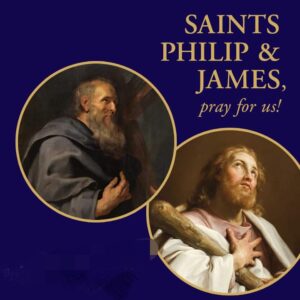 Saints Philip and James, who are commemorated in the Roman Canon Eucharistic Prayer I, as Apostles of Our Lord, pray for us! 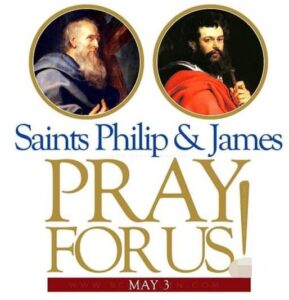