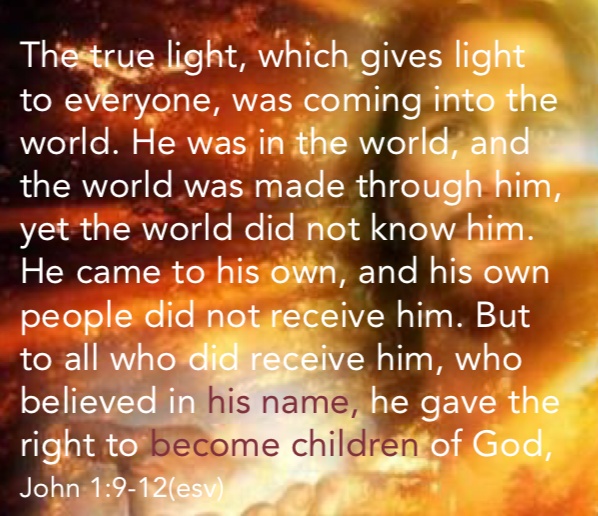 The true light that gives light to everyone was coming into the world. He was in the world, and though the world was made through him, the world did not recognize him. He came to that which was his own, but his own did not receive him. Yet to all who did receive him, to those who believed in his name, he gave the right to become children of God. John 1:9–12,

Merciful Father, in unison we raise Hallelujah upon Hallelujah in your praise, till our voices invade the heavens where you sit, King of kings, in all your illumined glory. And with our continued cries of worship, may the rulers of darkness be defeated and overcome. Father, we wish to make amends for our arrogance and boastfulness in presuming to know and understand what we could not fathom and our ignorance in not recognizing Jesus, the Lord of Light, even while beholding the supernatural brilliance of his purifying aura. For he assumed flesh to fulfill your Divine Providence, to lift us out of the murky mires of sinfulness and give us the refreshing Living water of faith, trust, hope and ultimate salvation offered to errant mankind by a steadfast and everloving God. And though we played traitor to our God, thus relegating our souls to the pits, you chose to forgive our penitent hearts with your redeeming grace. Grant that we are so energized by your all pervading light of life that we let it shine on those still unfortunate in not knowing you, continuing your command of evangelization in Jesus’ Name. Amen