DEVOTION DURING THE MONTH OF NOVEMBER 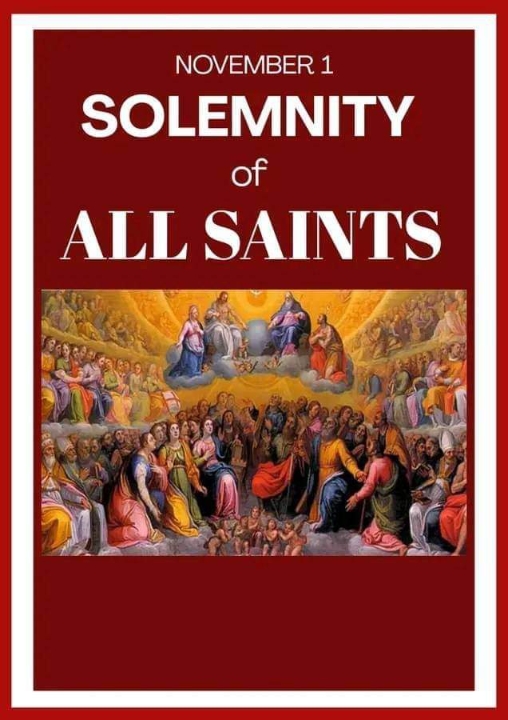 ALL SAINTS’ DAY – SOLEMNITY OF ALL SAINTS
1st NOVEMBER

Although millions, or even billions of people may already be saints, All Saints’ Day observances tend to focus on known saints –that is those recognized in the canon of the saints by the Catholic Church. All Saints’ Day is also commemorated by members of the Eastern Orthodox Church as well as some protestant churches, such as Lutheran and Anglican churches. 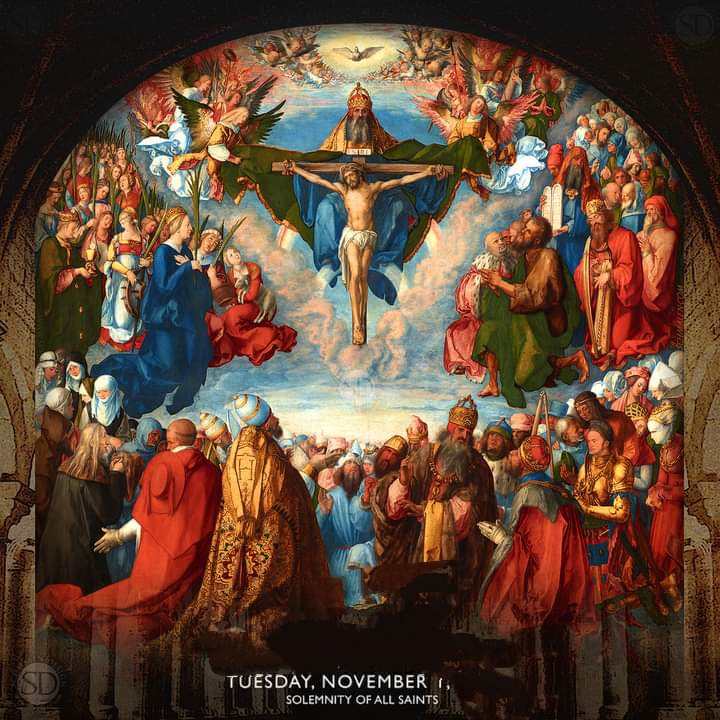 Generally, All Saints’ Day is a Catholic Holy Day of Obligation, meaning all Catholics are required to attend Mass on that day, unless they have an excellent excuse, such as serious illness. Other countries have different rules according to their national bishop’s conferences. The bishops of each conference have the authority to amend the rules surrounding the obligation of the day.

All Saints’ Day was formally started by Pope Boniface IV, who consecrated the Pantheon at Rome to the Virgin Mary and all the Martyrs on May 13 in 609 AD. Boniface IV also established All Souls’ Day, which follows All Saints. The choice of the day may have been intended to co-opt the pagan holiday “Feast of the Lamures,” a day which pagans used to placate the restless spirits of the dead. 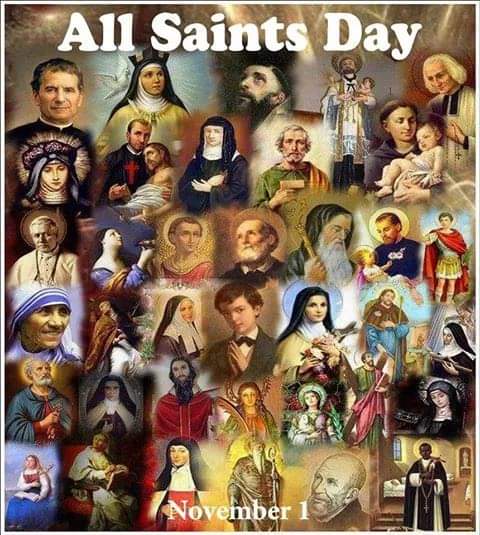 The holy day was eventually established on November 1 by Pope Gregory III in the mid-eighth century as a day dedicated to the saints and their relics. The May 13 celebration was subsequently abandoned. In Ireland, the Church celebrated All Saints’ Day on April 20, to avoid associating the day with the traditional harvest festivals and pagan feasts associated with Samhain, celebrated at the same time. 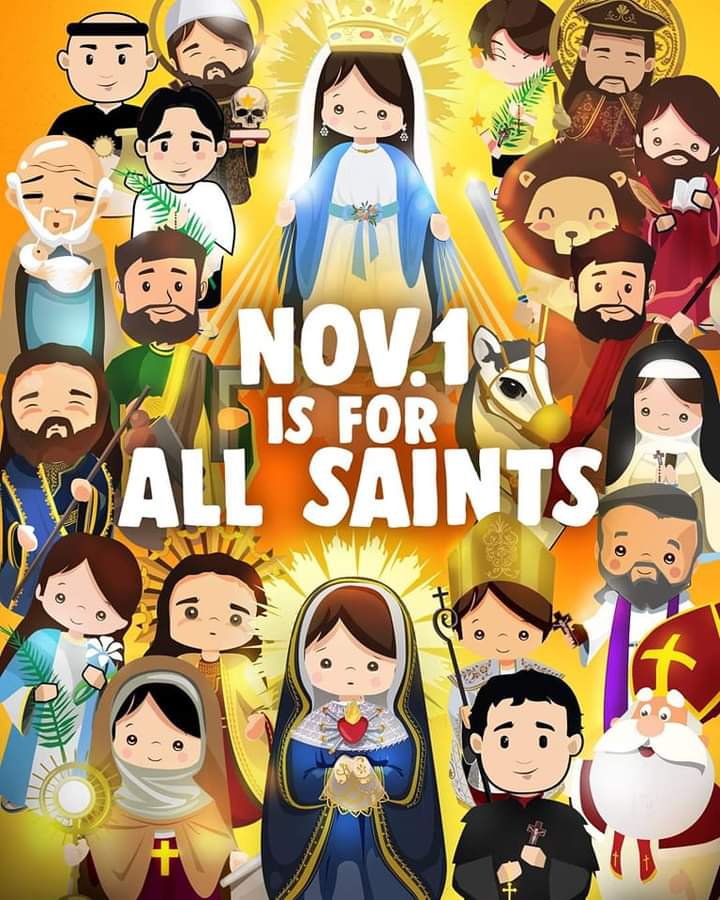 Following the establishment of the Frankish Empire, and following the reign of Charlemagne, the holy day, which was already celebrated on November 1, became a holy day of obligation by decree of Pope Gregory IV and Louis the Pious, who was king over a portion of Charlemagne’s former empire.

Following the Protestant Reformation, many Protestants retained the holy day, although they dismissed the need to pray for the dead. Instead, the day has been used to commemorate those who have recently died, usually in the past year, and to remember the examples of those who lived holy lives. 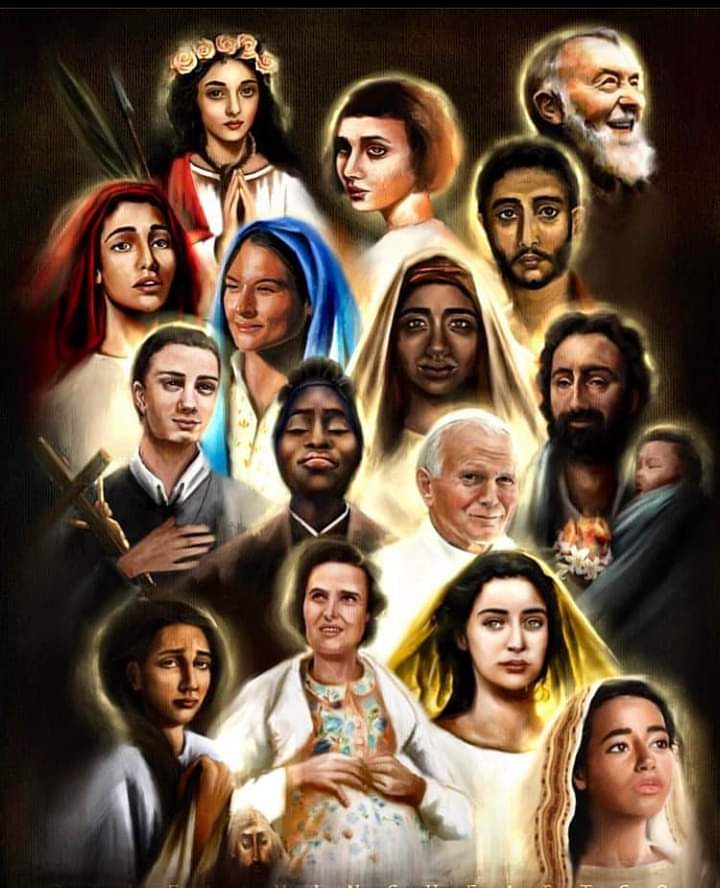 The Catholic practice however, celebrates all those who have entered heaven, including saints who are recognized by the Church and those who are not. Holy day customs vary around the world. In the United States, the day before is Halloween and is usually celebrated by dressing in costumes with themes of death commonly associated.

Although nearly everyone celebrates Halloween for the fun of the secular holiday, the following religious solemnity, is not widely practiced or acknowledged by most Americans unless they are Catholic. In other countries, such as Portugal, Spain and Mexico, traditional practices include performance of the play, “Don Juan Tenorio” and offerings made to the dead. All Saints’ Say occurs on the same day as the Mexican “Dide los Innocentes” a day dedicated to deceased children.

Across much of Europe, the day is commemorated with offerings of flowers left on the graves of the dead. In Eastern Europe, candles are lit on graves instead of offerings of flowers. In some places, such as the Philippines, graves can be painted and repaired by family members. Many of these practices blur the distinction between All Saints’ Day and All Souls’ Day. (Source: catholic.org)

PRAYER ON THE SOLEMNITY OF ALL SAINTS’ DAY – 1st NOVEMBER 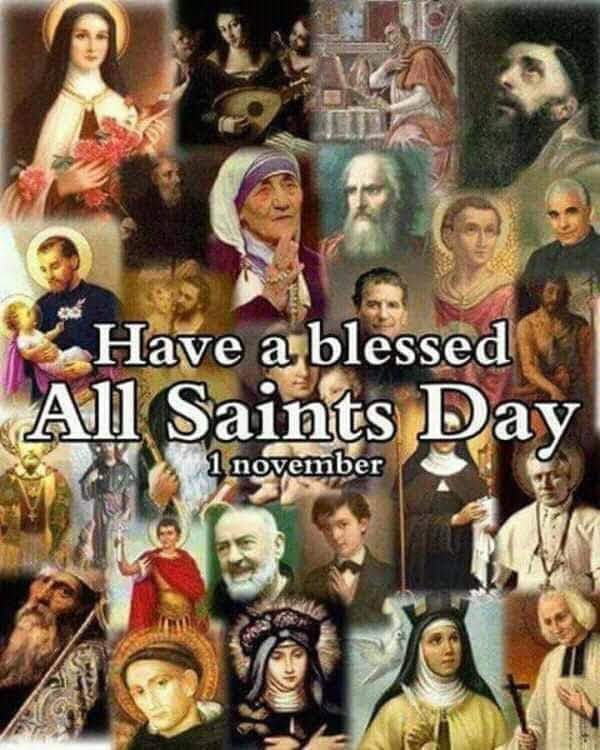 And the smoke of the incense, with the prayers of the saints, rose before God from the hand of the angel.- Revelation 8:4

Dear Heavenly Father, we submit our humble oblation of Thanksgiving on your venerable altar, where the multitude of angels and saints collectively offer resounding adoration and praise your ineffable, Holy Name.

Today is a time to pause and reflect on all those holy women and men who have come before us and who lived amongst us. We are all people of you, O God, praying for one another, learning from example, gaining by emulation, the wisdom of those who have lived the Gospel. 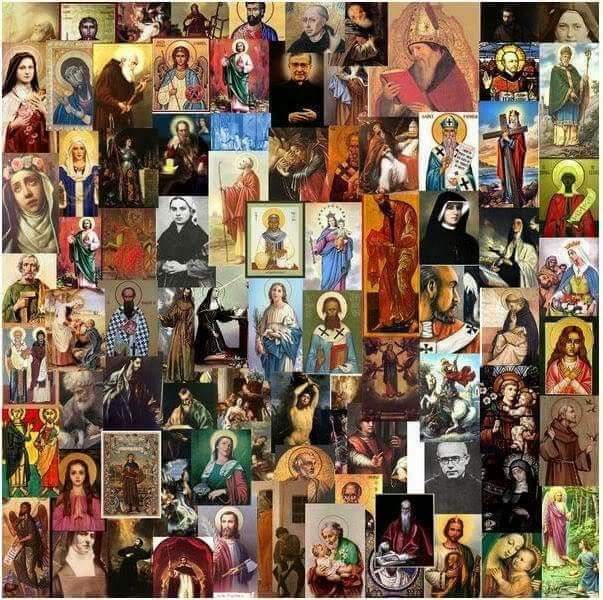 All those who had perfected their lives during their stay on earth, you have elevated to the prestigious rank of saints, honoring them with direct access and a special place in your Heavenly Kingdom, where they reside in eternal bliss and ecstasy, in the fullness of your Divine and Glorious Presence, beholding your Holy Countenance and exulting in its Goodness and Majesty.

Their sublime love for you enables us to make petitions of prayer to them, requesting their aid in our necessities. Thank you Lord for the gift of their interceding on our behalf, and the witness of their holy lives. We ask our patron saints and every saint who has become especially dear to us, to intercede for us. Grant us their assistance and protection according to the authority given them for specific intentions, having been instated as protectors over different aspects of life. 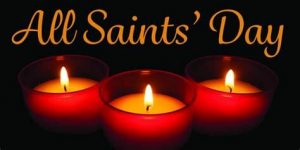 Thank you, God, for the tremendous sacrifices made by those who have gone before us and attained sainthood. Bless the memories of your saints, dear God. May we learn how to walk wisely from their examples of faith, dedication, worship, and love, in the honour and noble victory of the martyrs.

We ask for the intercession of each member of the Communion of Saints, turning our gaze to the immense multitude of those who have already reached the blessed land, and points us on the path that will lead us to that destination. 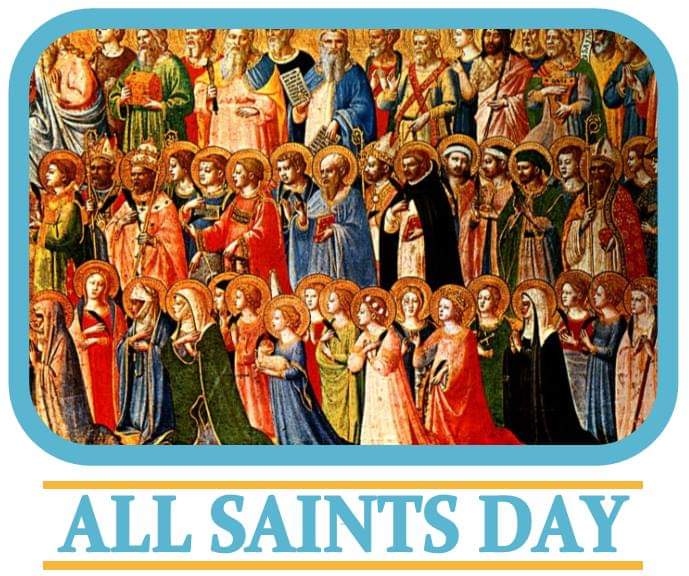 All the Saints are forever spiritually connected with the world and can intercede on our behalf because of a shared communion with Jesus Christ. All believers are also connected with each other through this shared communion with Christ. We pray by the Litany of the Saints, to access their aid in overcoming temptation and gaining the fullness of life in the Counsel of the Most High, through our Lord Jesus Christ. Amen 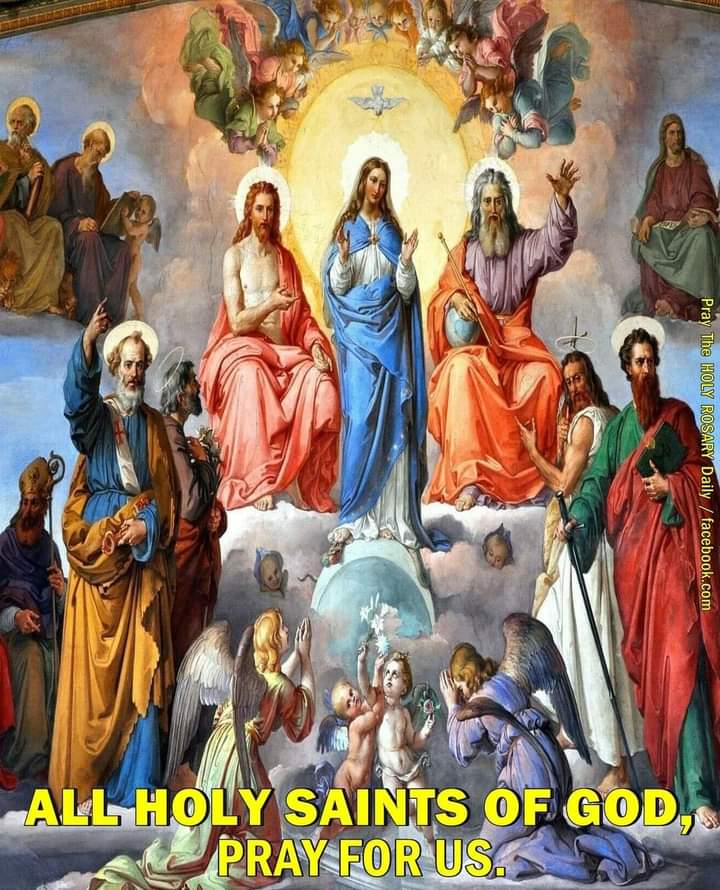 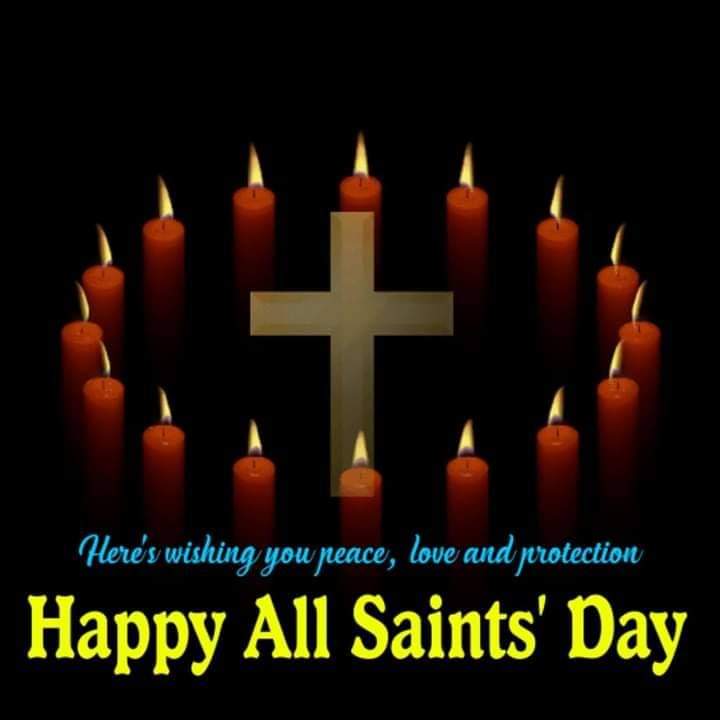