THE NATIVITY OF THE BLESSED VIRGIN MARY – 8th SEPTEMBER 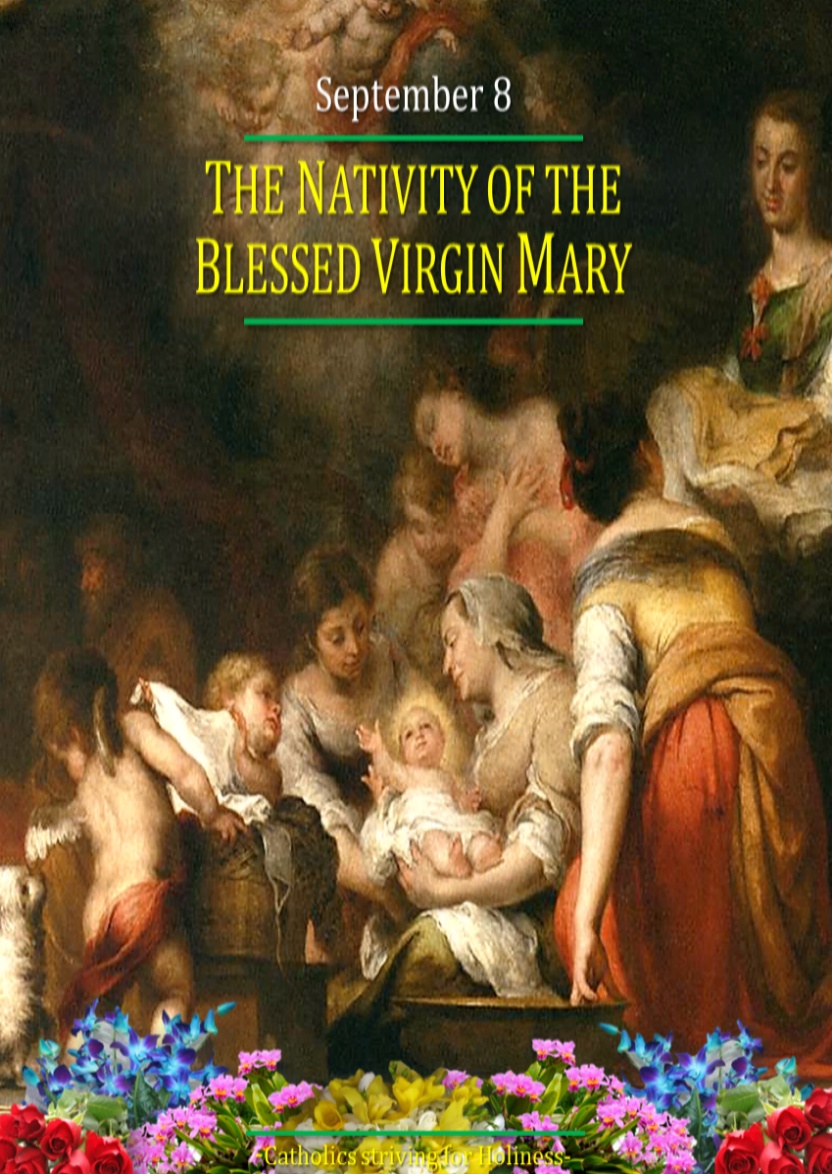 THE NATIVITY OF THE BLESSED VIRGIN MARY – 8th SEPTEMBER

The modern canon of scripture does not record Mary’s birth. The earliest known account of Mary’s birth is found in the Gospel of James (5:2), an apocryphal text from the late second century, with her parents known as Saint Anne and Saint Joachim.

In the case of saints, the Church commemorates their date of death, with Saint John the Baptist and the Virgin Mary as the few whose birth dates are commemorated. The reason for this is found in the singular mission each had in salvation history, but traditionally also because these alone were holy in their very birth (for Mary, see Immaculate Conception; John was sanctified in Saint Elizabeth’s womb according to the traditional interpretation of Luke 1:15). 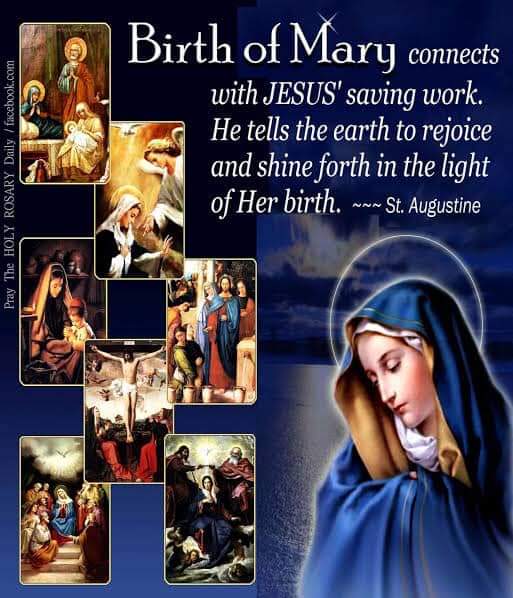 Devotion to the innocence of Mary under this Marian title is widely celebrated in many cultures across the globe in various prayers and hymns such as the Novena in Honor of the Nativity of the Blessed Virgin Mary.

The “Protoevangelium of James,” which was probably put into its final written form in the early second century, describes Mary’s father Joachim as a wealthy member of one of the Twelve Tribes of Israel. Joachim was deeply grieved, along with his wife Anne, by their childlessness. “He called to mind Abraham,” the early Christian writing says, “that in the last day God gave him a son Isaac.”

Joachim and Anne began to devote themselves extensively and rigorously to prayer and fasting, initially wondering whether their inability to conceive a child might signify God’s displeasure with them. 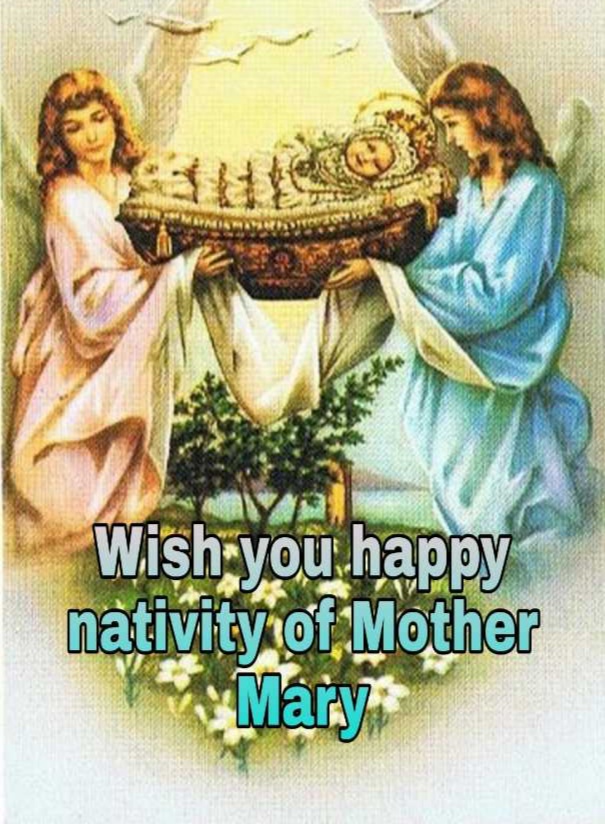 As it turned out, however, the couple were to be blessed even more abundantly than Abraham and Sarah, as an angel revealed to Anne when he appeared to her and prophesied that all generations would honor their future child: “The Lord has heard your prayer, and you shall conceive, and shall bring forth, and your seed shall be spoken of in all the world.”

After Mary’s birth, according to the Protoevangelium of James, Anne “made a sanctuary” in the infant girl’s room, and “allowed nothing common or unclean” on account of the special holiness of the child. The same writing records that when she was one year old, her father “made a great feast, and invited the priests, and the scribes, and the elders, and all the people of Israel.”

“And Joachim brought the child to the priests,” the account continues, “and they blessed her, saying: ‘O God of our fathers, bless this child, and give her an everlasting name to be named in all generations’ . . . And he brought her to the chief priests, and they blessed her, saying: ‘O God most high, look upon this child, and bless her with the utmost blessing, which shall be for ever.’” 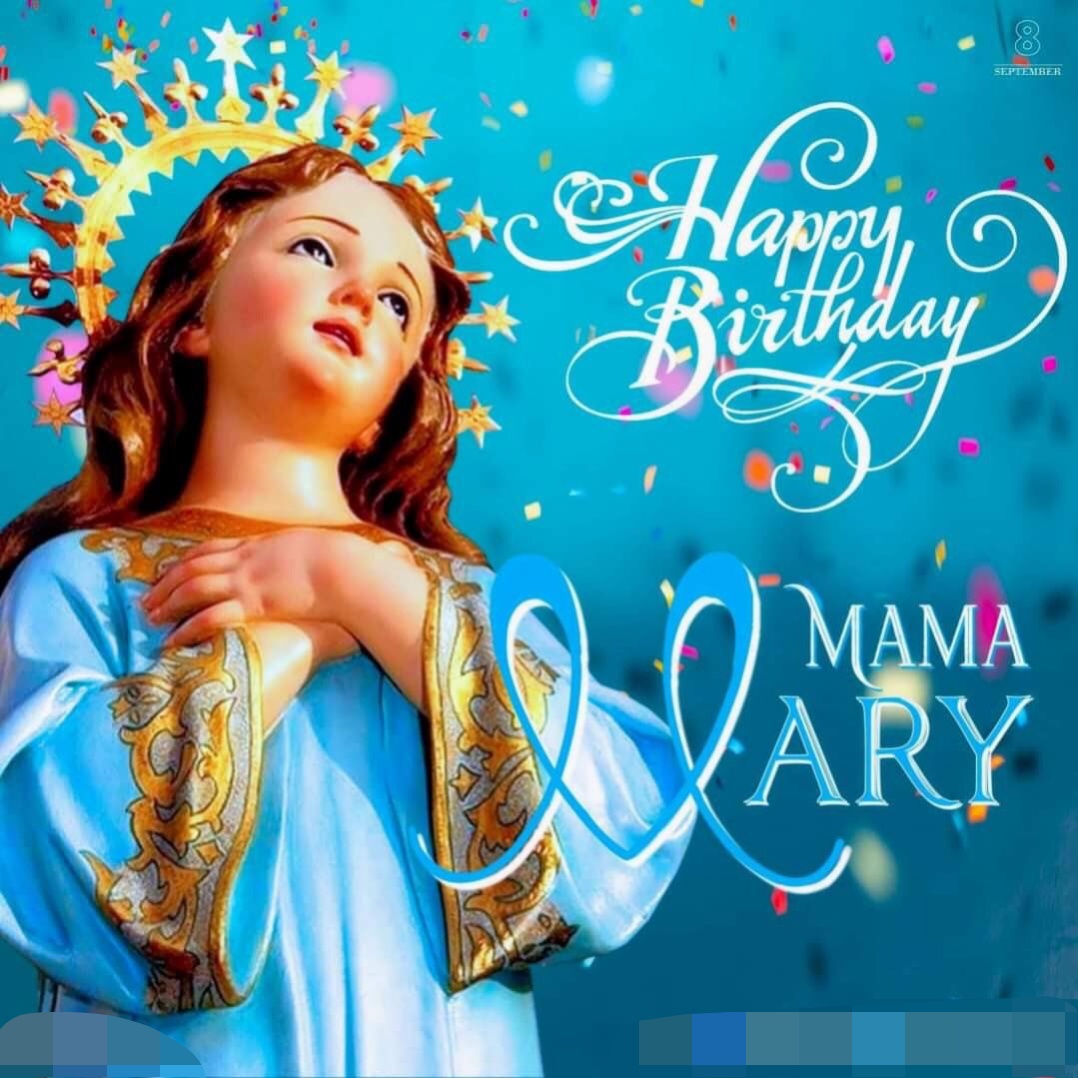 The protoevangelium goes on to describe how Mary’s parents, along with the temple priests, subsequently decided that she would be offered to God as a consecrated Virgin for the rest of her life, and enter a chaste marriage with the carpenter Joseph.

Saint Augustine described the birth of the Blessed Virgin Mary as an event of cosmic and historic significance, and an appropriate prelude to the birth of Jesus Christ. “She is the flower of the field from whom bloomed the precious lily of the valley,” he said.

The fourth-century bishop, whose theology profoundly shaped the Western Church’s understanding of sin and human nature, affirmed that “through her birth, the nature inherited from our first parents is changed.” 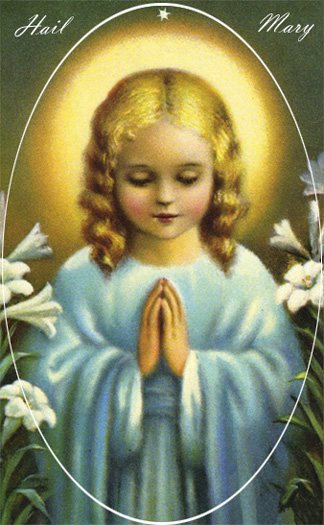 Pious accounts place the birthplace of the Virgin Mary in Sepphoris, where a 5th-century basilica is excavated at the site. Some accounts speak of Nazareth and others say it was in a house near the Sheep Gate in Jerusalem. It is possible that a wealthy man such as Joachim had a home in both Judea and Galilee.

The earliest document commemorating Marymas comes from a hymn written in the sixth century. The feast may have originated somewhere in Syria or Palestine in the beginning of the sixth century, when after the Council of Ephesus, the cult of the Mother of God was greatly intensified, especially in Syria.

The first liturgical commemoration is connected with the sixth century dedication of the Basilica Sanctae Mariae ubi nata est, now called the Church of Saint Anne in Jerusalem. The original church, built in the fifth century, was a Marian basilica erected on the spot known as the Shepherd’s Pool and thought to have been the home of Mary’s parents.

In the seventh century, the feast was celebrated by the Byzantines as the Feast of the Birth of the Blessed Virgin Mary. Since the story of Mary’s Nativity is known only from apocryphal sources, the Latin Church was slower in adopting this festival. At Rome, the Feast began to be kept toward the end of the 7th century, brought there by Eastern monks. 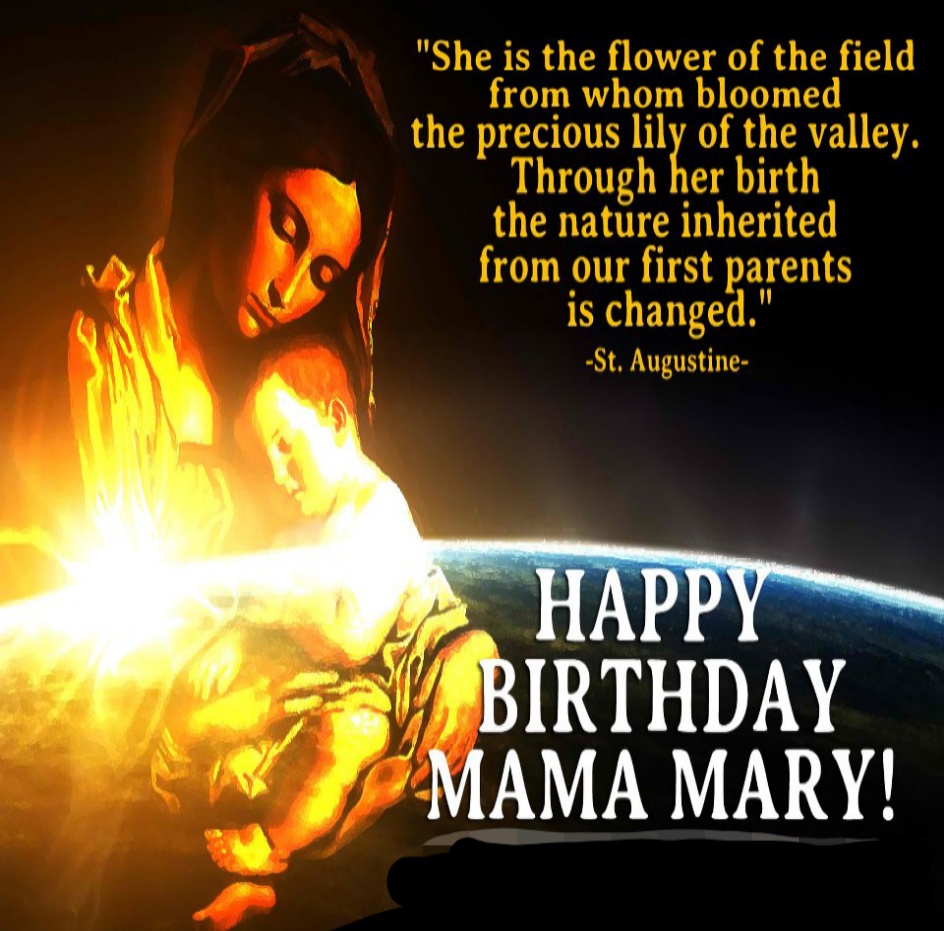 Tradition celebrates Marymas as a liturgical feast in the General Roman Calendar and in most Anglican liturgical calendars on 8 September, nine months after the solemnity of her Immaculate Conception, celebrated on 8 December. The feast is also included in the Tridentine Calendar for 8 September.

This date is also used in the Western Rite Orthodox Church. Previous to the reforms by Pope Pius XII, the General Roman Calendar of 1954 kept the Nativity of the Blessed Virgin Mary as an Octave since the Octave was established by Pope Innocent IV in 1243.

PRAYER ON FEAST OF THE NATIVITY OF OUR LADY – 8th SEPTEMBER

Mary, unblemished flower of the field of God’s earth from whom bloomed forth the precious lily who would radiate the light of the dawn of salvation to the most cherished of God’s creation, the human race.

Created in God’s form and likeness, brought to life by his breath and Spirit, yet doomed for all time through betrayal of our first parents, God, consumed by his passionate, pure love for his creation, sent his beloved Word made flesh into the world to save and redeem mankind by his death and resurrection, taking upon himself our transgressions in exchange for our eternal redemption.

And Mary, you became the chosen vessel, the channel through which God would assume human flesh, become incarnate as the Son of Man and bring to fruition his eternal plan of adoption of the human race to sonship and an eternal inheritance as a free gift of his love. 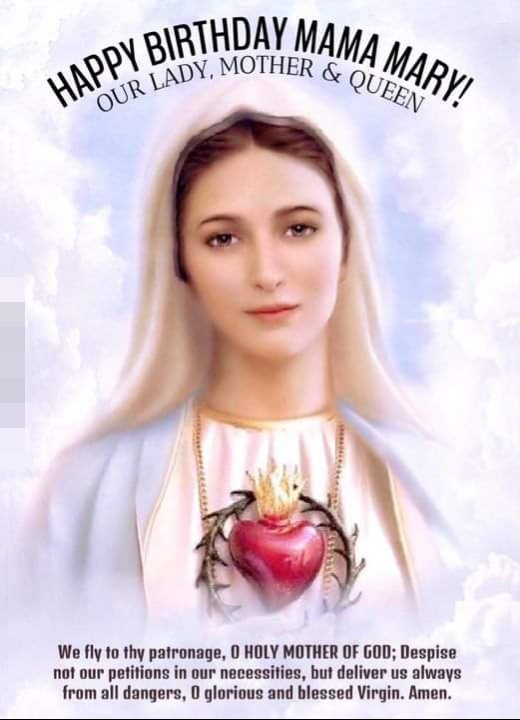 You are the foreshadowing of God’s perfect love for mankind through his Son Jesus Christ, our Savior and Redeemer. The feast of your Nativity, therefore, is an unparalleled veneration of your incomparable purity, beauty, innocence and your total acceptance and obedience of God’s plan of salvation for the world.

You entered this world sinless through the privilege of the Immaculate Conception and are thus the firstborn of the redeemed. Your nativity is a cause for great joy as it is considered the “dawn of our salvation.” In you, the whole of creation is exalted. God gave you the richest personality imaginable and the added gifts of supernatural order, treasures of elevated thought and perfect nature, the most precious graces God ever gave to any human creature.

Your parents, Anna and Joachim were blessed when they received the promise of a child who would advance God’s plan of salvation for mankind, stressing the special presence of God in your life from the beginning. You, Mother Mary, are the personification of God’s perfect creation and we honor your birthday as the day the world returned to the nature God intended it to be. Amen 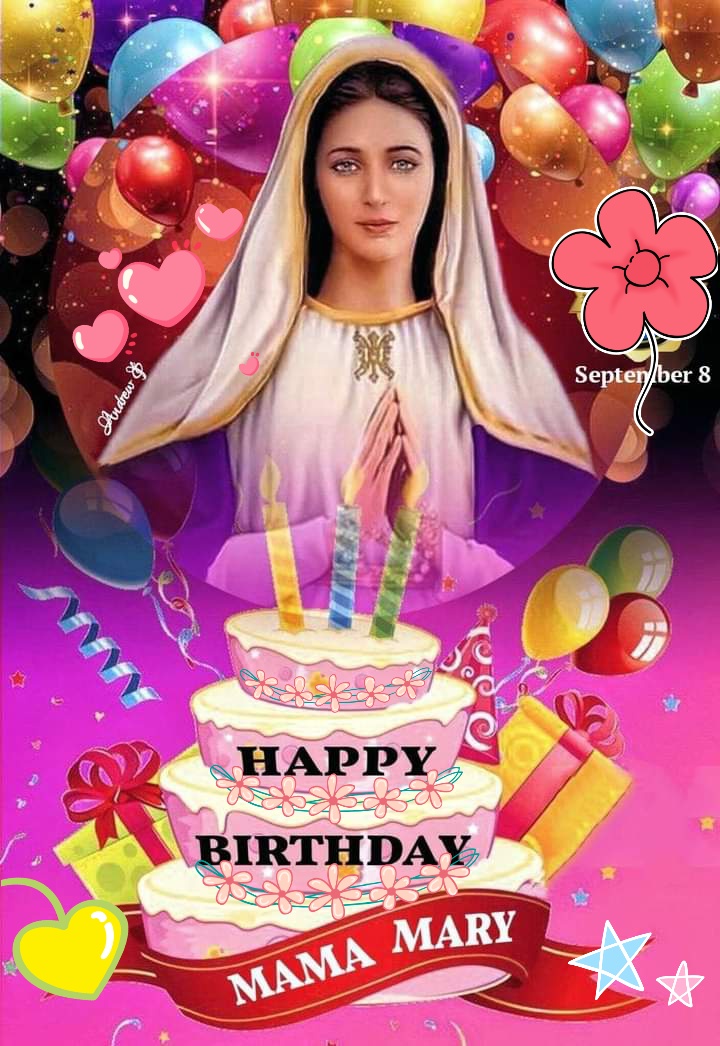