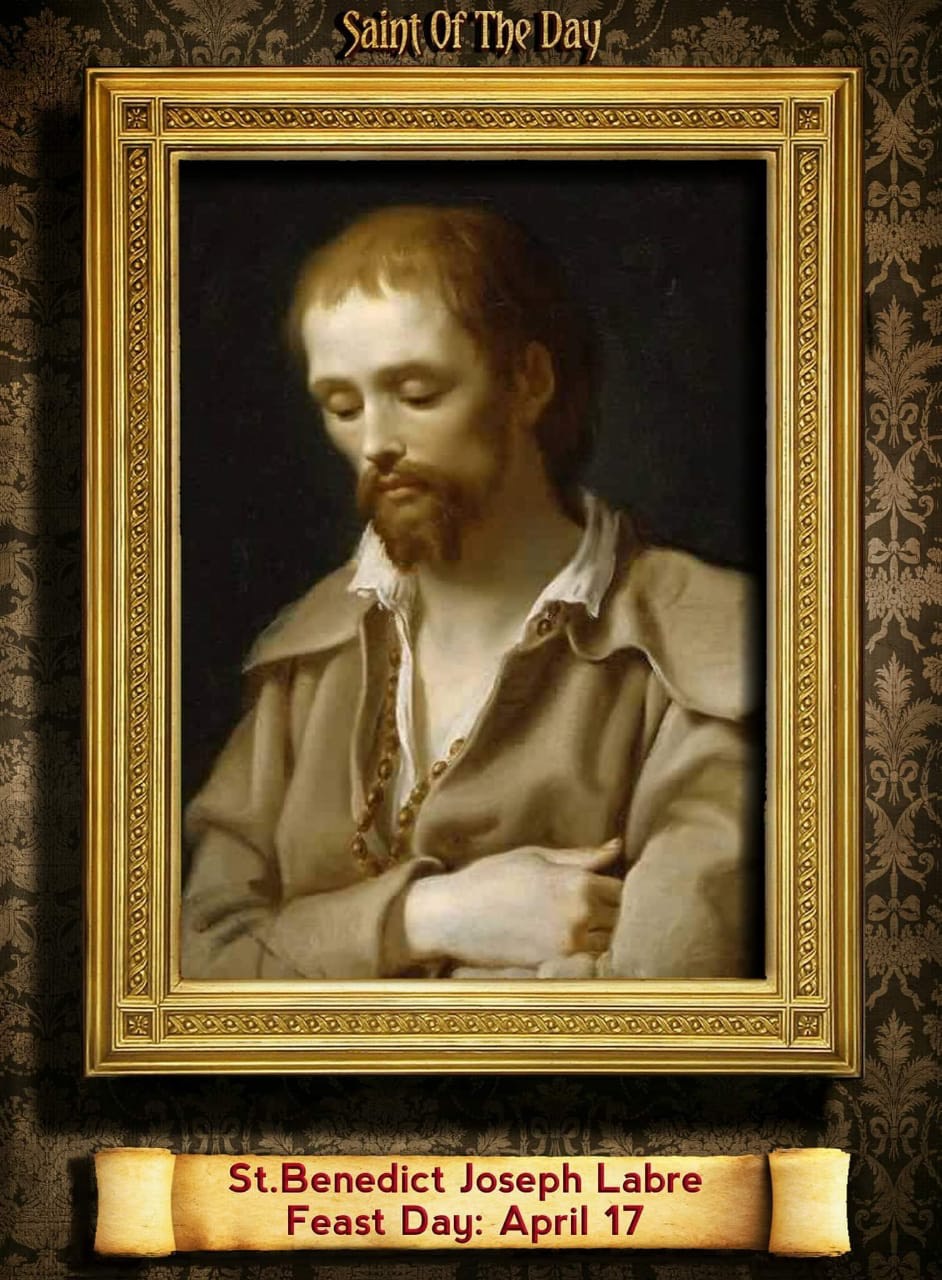 Benedict Joseph Labre (French: Benoît-Joseph Labre, 25 March 1748 – 16 April 1783) was a French mendicant, Franciscan tertiary, and Catholic saint. Labre was from a well to do family near Arras, France. After attempting a monastic lifestyle, he opted instead for the life of a pilgrim. He traveled to most of the major shrines of Europe, subsisting by begging.

Labre is patron saint of the homeless. Labre was born in 1748 in the village of Amettes, near Arras, in the former Province of Artois in the north of France. He was the eldest of fifteen children of a prosperous shopkeeper, Jean-Baptiste Labre, and his wife, Anne Grandsire. Labre had an uncle, a parish priest, living some distance from his family home.

This uncle gladly received him, and undertook his early education for the priesthood. At the age of sixteen, he approached his uncle about becoming a Trappist monk, but his parents told him he would have to wait until he grew older. When Benedict was about eighteen, an epidemic struck the city, and uncle and nephew busied themselves in the service of the sick.

While the uncle took care of the souls and bodies of the people, Benedict went to and fro caring for the cattle. Among the last victims of the epidemic was Labre’s uncle. Labre set off for La Trappe Abbey to apply to the Order, but did not come up to their requirements. He was under age, he was too delicate; he had no special recommendations.

He later attempted to join the Carthusians and Cistercians, but each order rejected him as unsuitable for communal life. He was, for about six weeks, a postulant with the Carthusians at Neuville. In November 1769 he obtained admission to the Cistercian Abbey of Sept-Fonts. After a short stay at Sept-Fonts his health gave way, and it was felt that his vocation lay elsewhere.

Labre, according to Catholic tradition, experienced a desire, which he considered was given to him by God and inspired by the example of Alexius of Rome and that of the Franciscan tertiary pilgrim, Saint Roch, to “abandon his country, his parents, and whatever is flattering in the world to lead a new sort of life, a life most painful, most penitential, not in a wilderness nor in a cloister, but in the midst of the world, devoutly visiting as a pilgrim the famous places of Christian devotion.”

Labre joined the Third Order of Saint Francis and settled on a life of poverty and pilgrimage. He first traveled to Rome on foot, subsisting on what he could get by begging. He then traveled to most of the major shrines of Europe, often several times each. He visited the various shrines in Loreto, Assisi, Naples, and Bari in Italy, Einsiedeln in Switzerland, Paray-le-Monial in France, and Santiago de Compostela in Spain.

During these trips he would always travel on foot, sleeping in the open or in a corner of a room, with his clothes muddy and ragged. On one occasion he stopped at the farmhouse of Matthieu and Marie Vianney, who would later become the parents of Curé d’Ars. He lived on what little he was given, and often shared the little he did receive with others. He is reported to have talked rarely, prayed often, and accepted quietly the abuse he received.

In so doing, Labre was following in the role of the mendicant, The “Fool-for-Christ,” found more often in the Eastern Church. He spent many hours in adoration of the Blessed Sacrament. He would often swoon when contemplating the crown of thorns, in particular, and, during these states, it is said he would levitate or bilocate. He was also said to have cured some of the other homeless he met and to have multiplied bread for them.

In the last years of his life (his thirties), he lived in Rome, for a time living in the ruins of the Colosseum, and would leave only to make a yearly pilgrimage to the shrine of Our Lady of Loreto. He was a familiar figure in the city and known as the “saint of the Forty Hours” (or Quarant’ Ore) for his dedication to Eucharistic adoration.

Labre’s confessor, Marconi, wrote his biography and attributed 136 separate cures to his intercession within three months of his death. Those miracles were instrumental in the conversion of the Reverend John Thayer, the first American Protestant clergyman to convert to Catholicism, who was resident in Rome at the time of St. Benedict’s death.

A cult grew up around him very soon after his death; he was declared Blessed by Blessed Pius IX in 1860, and canonized by Pope Leo XIII in 1881.[6] Benedict is patron saint of Unmarried men (bachelors), rejects, mental illness, mentally ill people, insanity, beggars, hobos, the homeless.

Saint Benedict Joseph Labre, you gave up honor, money, and home for love of Jesus. Help us to set our hearts on Jesus and not on the things of this world. You lived in obscurity among the poor in the streets. Enable us to see Jesus in our poor brothers and sisters and not judge by appearances. Amen 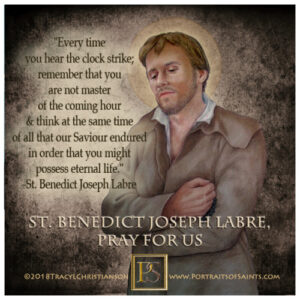