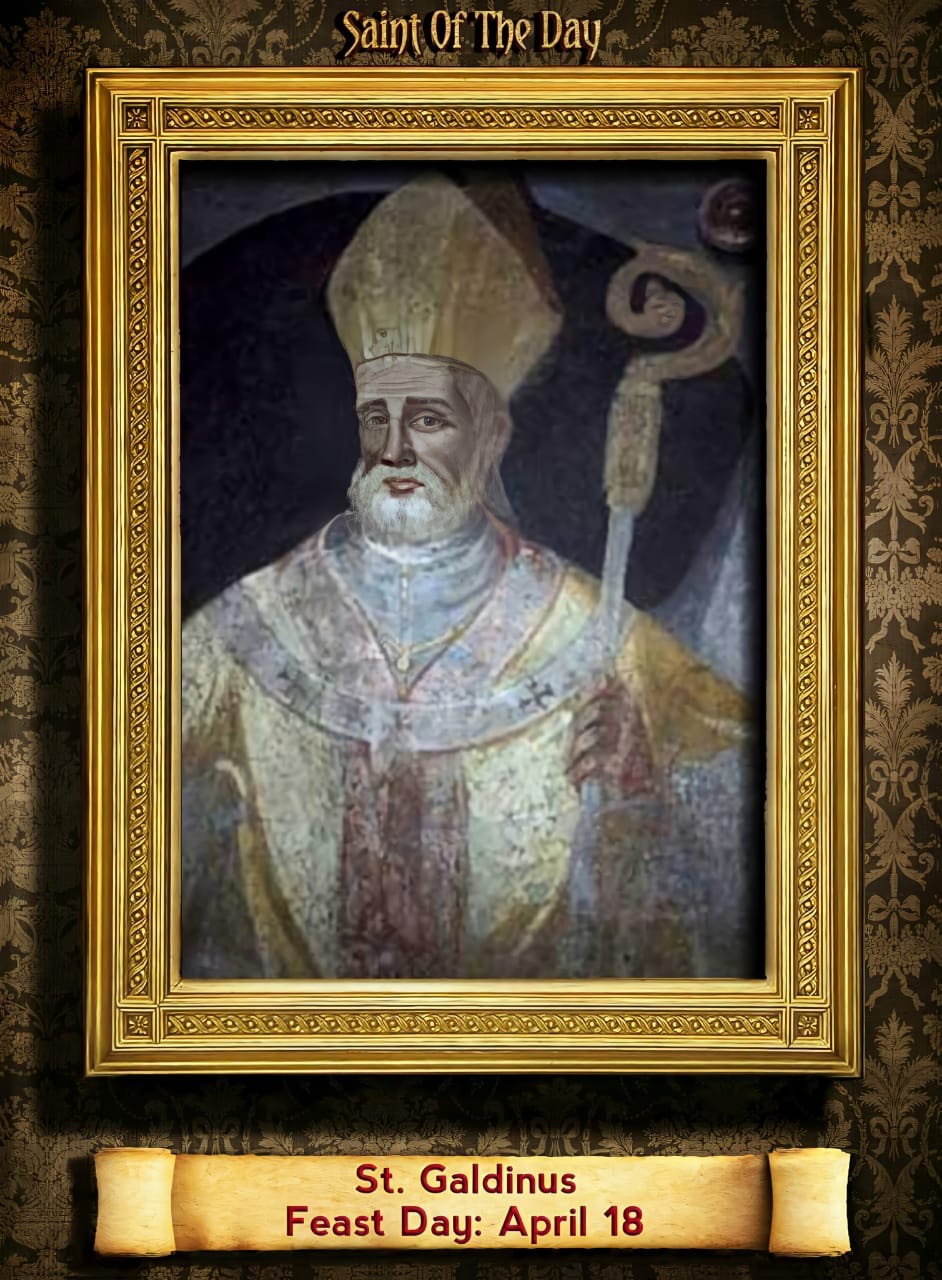 Saint Galdinus of Milan, Cardinal and Defender of the Faith, 1100 -1176, was a Roman Catholic saint from Milan in Northern Italy. He was a cardinal elevated in 1165 and he also served as Archbishop of Milan from 1166 to his death in 1176. He was a staunch supporter both of Pope Alexander III, and of Milan and its neighbours in Lombardy, in their joint and parallel struggles against the Antipope Victor IV, supported by Holy Roman Emperor Frederick I Barbarossa.

He was born in Milan around 1096 into the della Sala family which was considered to be minor nobility of the city. He was a strong supporter of the Roman papacy in the schism that erupted in 1159 after the death of Pope Adrian IV. Pope Alexander III was the Roman candidate, while Antipope Victor IV was supported by Frederick Barbarossa and his cardinals. Galdinus’ Milanese church supported Alexander III, and as archdeacon of the church, he took a very public stand. Frederick came to besiege Milan and reduced it within six months.

Galdinus joined Alexander III in Genoa and followed him to Maguelonne, Montpellier, and Clermont. He later followed him to Sicily and Rome upon his return in 1165. When Alexander returned to the papacy in 1165, he named Galdinus in the consistory of 15 December as the Cardinal Priest of the titular church of Santa Sabina, and a year later made him the Archbishop of Milan. A year later, Alexander III made him the apostolic legate for Lombardy.

When the Lombard League expelled Barbarossa, Galdinus took possession of his See and began deposing any Lombard priests who were faithful to Victor IV. He consecrated new bishops at Lodi, Alba, Cremona, Vercelli, Asti, Turin, Novara, Brescia, and Alessandria. On 18 April 1176 Galdinus della Sala died in his pulpit, having just completed a sermon against the Cathars, who were seen by orthodox Catholics as ‘heretics’. Pope Alexander III canonized Galdinus as a saint of the Roman Catholic Church during his pontificate.

His liturgical feast day in the Roman Catholic Church, celebrated particularly in churches which follow the Ambrosian Rite, is 18 April (the anniversary of his death). He is remembered also for his charity in Milan to the poor and to those imprisoned for debt. He is a patron of both Lombardy and his old archdiocese. Galdinus lived during a very turbulent era in the Church.

Plagued by scandal and political contests, the Church faced unprecedented attacks in the mid-12th Century. This led the Church to become divided under rival popes, driving clergy loyal to the true pontiff into hiding in certain areas loyal to the anti-pope. St. Galdinus was one of the men whose loyalty to the Papacy and Pope Alexander III caused him to be exiled from his clerical duties in Milan. 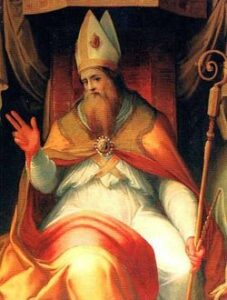 During the era of the anti-pope, St. Galdinus had served under two archbishops of Milan. Capable and orthodox, he rebuilt a city demolished by the political and ecclesial strife that had ensued over the years. He commenced an effort to reform the clergy, who during the confusion developed unpriestly habits, like unchaste relations and selling of ecclesial graces (simony). Further, he sought to aid the poor, whose miseries were only compounded by the political turmoil.

For the decades that he led the Church in Milan, St. Galdinus became known as a powerful preacher, whose eloquence and zeal educated and touched the hearts of the Faithful. In the final days of his life he had fallen into such fragile health that he was not able to celebrate the Mass. Nonetheless, true to form, St. Galdinus would not miss the opportunity to teach and preach.

Accordingly, in his final sermon he was articulating a position against prevailing false doctrines in the Church, when he concluded not by exiting the pulpit, but by dying in it. St. Galdinus shows us a stunning example of a man who died with Christ’s Church at the very forefront of his thoughts, words, and actions. We could only hope to die as he did. The crux of St. Galdinus final sermon had to do with the need for reconciliation in the Church by abandoning the anti-pope.

He died, of course, before the Church was reunited under its One True Head. But he worked diligently toward this goal, despite it all. His final breath was drawn in 1176. By 1177 the excommunicated Emperor Frederick was reconciled to Pope Alexander III and the Church was, again, united. St. Galdinus didn’t live to see it, but he never stopped working for it.

We must follow this example. We must work unceasingly to ushering in God’s Kingdom, to reunite a fractured Church. We cannot despair because our efforts seem unfruitful or ineffective. Christ will not let our efforts be in vain. We do His work, and though we may die before we see the result in this earthly life, we will live eternally to enjoy the results forever in the next. 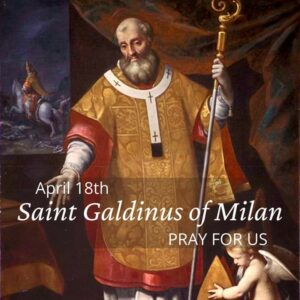 Dear God, your chosen saint, Saint Galdinus, in zealous commitment, went out fighting for what Jesus built. Passing right after delivering a sermon against heresies of our time is what we all should aspire for.

Lord, we pray that each of us could muster the courage to speak and stand up when our faith is under assault. In Jesus’ Name. Amen

Saint Galdinus of Milan, pray for us.