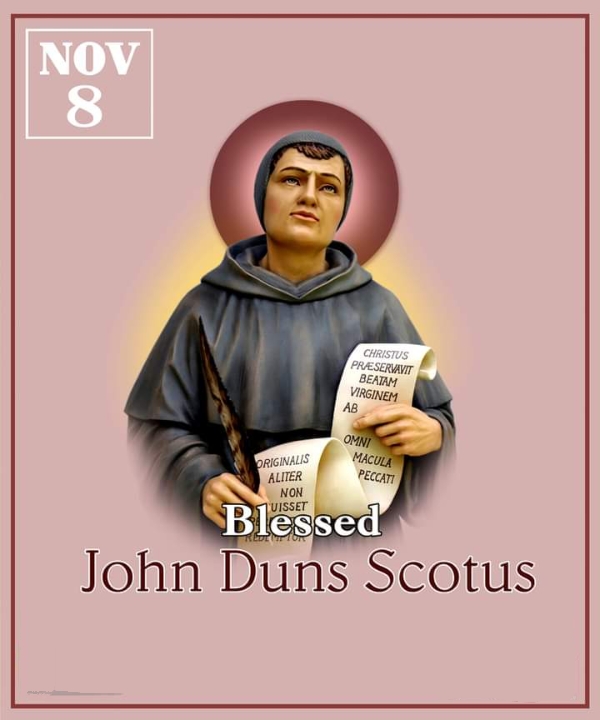 John Duns Scotus, born at Duns, a village near Berwick-on-Tweed in Scotland, entered the Franciscan order at Dumfries where his uncle Elias Duns was superior. He underwent education at Oxford and Paris and was ordained a Franciscan priest in 1291. In 1297 he returned to teach theology and philosophy at Oxford and Cambridge. As a philosopher, he knew the richness of Platonic-Augustinian-Franciscan tradition as well as that of Aquinas, Aristotle and the Muslim philosophers, but he was also an independent thinker.

A moral philosopher, he defended the reality of free will with this practical quote: “If I start beating someone, they will tell me to stop. But how can I stop if I haven’t free will?” In 1303 when King Philip the Fair wanted to enlist the University of Paris on his side in a dispute with Pope Boniface VIII, John Duns Scotus dissented and with eight other friars was forced to leave France. However, he was able to return less than a year later.

After his return to Paris, he continued his lectures on the Sentences of Peter Lombard and received his doctorate in theology in 1305. Although appointed the Franciscan regent master in theology at Paris, Scotus was transferred to Cologne, probably beginning his duties there in October 1307. Blessed John, who is called the “Minstrel of the Incarnate Word,” died on November 8, 1308. He was beatified in 1993.

He was buried in the Franciscan church near the famous Cologne cathedral. Despite his influence as a philosopher and theologian, John Duns Scotus had many theological opponents, particularly among those thinkers who embraced the ideas of Saint Thomas Aquinas. In the sixteenth century these critics created a new name for the followers of Duns Scotus: dunce. This word is still used today to describe someone incapable of real scholarship.

He was a champion of the Immaculate conception of Mary. He explained that at one and the same time, Mary, as a human descendant of Adam and Eve, contracted the debt of original sin and became, by the privileged infusion of grace a daughter of God, which preserved her from the consequences of the common lot of fallen nature by a special anticipation of the merits of the Savior. He thus cleared the path for a theological acceptance of this Marian prerogative, paving the way for its solemn definition by Blessed Pope Pius IX in 1854.

Gerard Manley Hopkins wrote a poem entitled Duns Scotus’s Oxford. The last three lines pay tribute to Scotus as “the rarest-veinèd unraveller” (the subtle doctor) and to his argument for Mary’s Immaculate Conception – “a not rivalled insight”. The last line is beautifully anbivalent in its use of the word “fired” – in the two senses of (a) arousing intense controversy and (b) arousing intense devotion.

“Although Duns Scotus was aware that in fact, because of original sin, Christ redeemed us with his Passion, Death and Resurrection, he affirmed that the Incarnation is the greatest and most beautiful work of the entire history of salvation.”—Pope Benedict XVI

Lord God, source of all wisdom, in Blessed John Duns Scotus, priest and champion of the Immaculate Virgin, you have given us a master of life and thought. Grant that, enlightened by his example and nourished by his doctrine, we may remain faithful followers of Christ, who lives and reigns with you in the unity of the Holy Spirit, God, for ever and ever. Amen 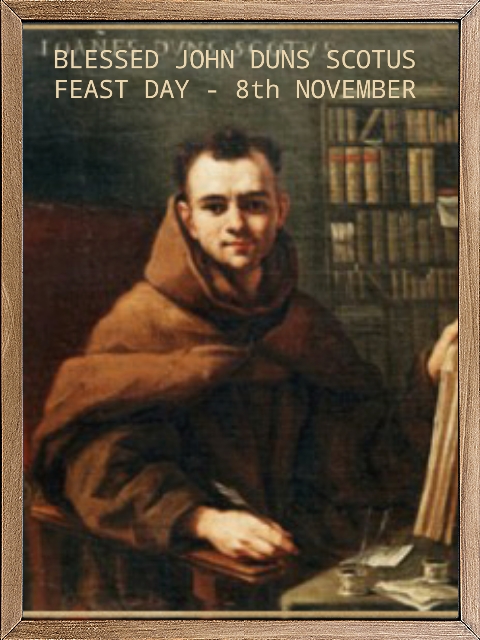