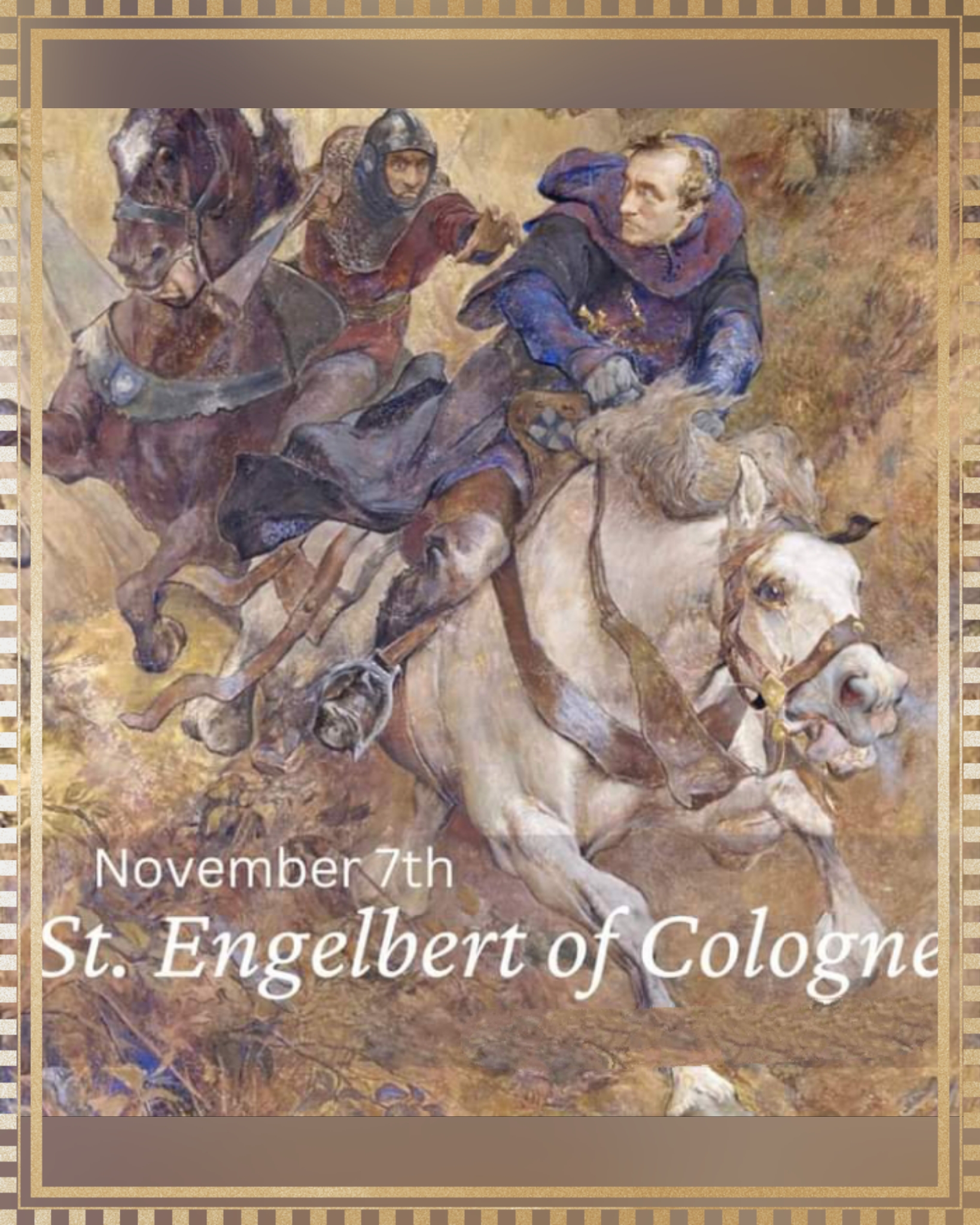 He studied at the cathedral school at Cologne, Germany.  In a time when clerical and episcopal positions were a part of political patronage, Englebert was made provost of the churches of St. George and St. Severin at Cologne, and of St. Mary’s at Aachen while still a young boy.  In 1199 he was elected provost of the cathedral at Cologne at age 14, as it was a common abuse in the Church at the time to appoint the children of nobles to such positions.

He led a worldly and dissolute young life, known for his good looks, keen mind, and wild ways.  Englebert went to war to support his cousin, Archbishop Adolf, against Archbishop Bruno.  For this, and for threatening to attack the Holy Roman Emperor Otto IV, both Engelbert and Adolf were excommunicated in 1206.

In 1208 Engelbert publicly submitted to the pope’s authority, and was received back into the Church.   In order to atone for his sin, he joined the crusade against the Albigenses in 1212.  On 29 Feb., 1216, the chapter of the cathedral elected him archbishop by a unanimous vote. By this point, Engelbert had mellowed somewhat, and cared about his see, but still had worldly ambitions.

To preserve the possessions and revenues of his see and the countship of Berg, he went to war with the Duke of Limburg and the Count of Cleves, restored civil order, demanded the allegiance of his nobles, erected defences around his lands, and even prosecuted family members when needed.

In appearance he was tall and handsome. He possessed a penetrating mind and keen discernment, was kind and condescending and loved justice and peace, but he was also ambitious and self willed. His archiepiscopal see had passed through severe struggles and suffered heavily, and he worked strenuously to repair the damage and to restore order. He took care of its possessions and revenues and was on that account compelled to resort to arms.

He defeated the Duke of Limburg and the Count of Cleves and defended against them also the countship of Berg, which he had inherited in 1218 on the death of his brother. He restrained the impetuous citizens of Cologne, broke the stubbornness of the nobility, and erected strongholds for the defence of his territories.

He did not spare even his own relations when guilty. In this way he gained the universal veneration of his people and increased the number of his vassals from year to year. Although in exterior bearing a sovereign rather than a bishop, for which he was blamed by pious persons, he did not disregard his duties to the Church, but strove to uplift the religious life of his people. 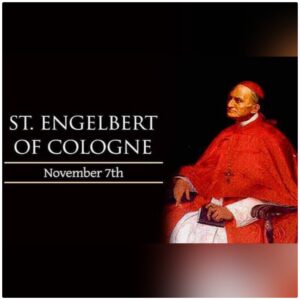 The mendicant orders which had been founded shortly before his accession, settled in Cologne during his administration.  He helped establish the Franciscans in his diocese in 1219 and the Dominicans in 1221, he enforced clerical discipline, he built monasteries and insisted on strict observance in them, and used a series of provincial synods to regulate church matters.  Blameless in his own life, he was a friend of the clergy and a helper of the poor.

Engelbert was appointed guardian of the juvenile King Henry VII and administrator of the Holy Roman Empire by Emperor Frederick II in 1221.  Engelbert supervised the kingdom and the king’s education, and placed the crown himself during Henry’s coronation in 1222.  He worked for a treaty with Denmark at the Diet of Nordhausen on 24 September 1223.

However, for all that he was loved by his people for the stability and security he brought, many of the nobility hated and feared him, and the archbishop had to travel with a troupe of bodyguards.  Pope Honorius III and Emperor Frederick II advised Engelbert to protect the nuns of Essen who were being oppressed and harassed by Engelbert’s cousin, Count Frederick of Isenberg.

To prevent action by the archbishop, Count Frederick and some henchmen ambushed Engelbert.  On 7 Nov., 1225, as Engelbert was journeying from Soest to Schwelm to consecrate a church, he was attacked on a dark evening by Frederick and his associates in a narrow defile, was wounded in the thigh, torn from his horse and killed. His body was covered with forty-seven wounds.  It was placed on a dung-cart and brought to Cologne on the fourth day.

King Henry wept bitterly over the remains, put the murderer under the ban of the empire, and saw him broken on the wheel a year later at Cologne.  He died contrite, having acknowledged and confessed his guilt.  His associates also perished miserably within a short time.  The crime, moreover, was disastrous for the German Empire, for the young king had now lost his best adviser and soon met a very sad fate, to the misfortune of his house and country.

Engelbert is considered a martyr as he died over the defence of religious sisters.  By his martyrdom Engelbert made amends for his human weaknesses. His body was placed in the old cathedral of Cologne, 24 Feb., 1226, by Cardinal Conrad von Urach. The latter also declared him a martyr; a formal canonization did not take place. In 1618 Archbishop Ferdinand ordered that his feast be celebrated on 7 November and solemnly raised his remains in 1622.

In the martyrology Engelbert is commemorated on 7 Nov., as a martyr.  A convent for nuns was erected at the place of his death. By order of Engelbert’s successor, Henry I, Cæsarius of Heisterbach, who possessed good information and a ready pen, wrote in 1226 the life of the saint in two books and added a third about his miracles .

Saint Engelbert of Cologne, your deep commitment to duty and obedience to the Pope led to your martyrdom. We beseech you to pray that we, be granted the same level of devotion you possessed.

Glorious Saint Engelbert, you strove tirelessly for justice as archbishop of Cologne. Help us to be Christians in name and devotion. Amen 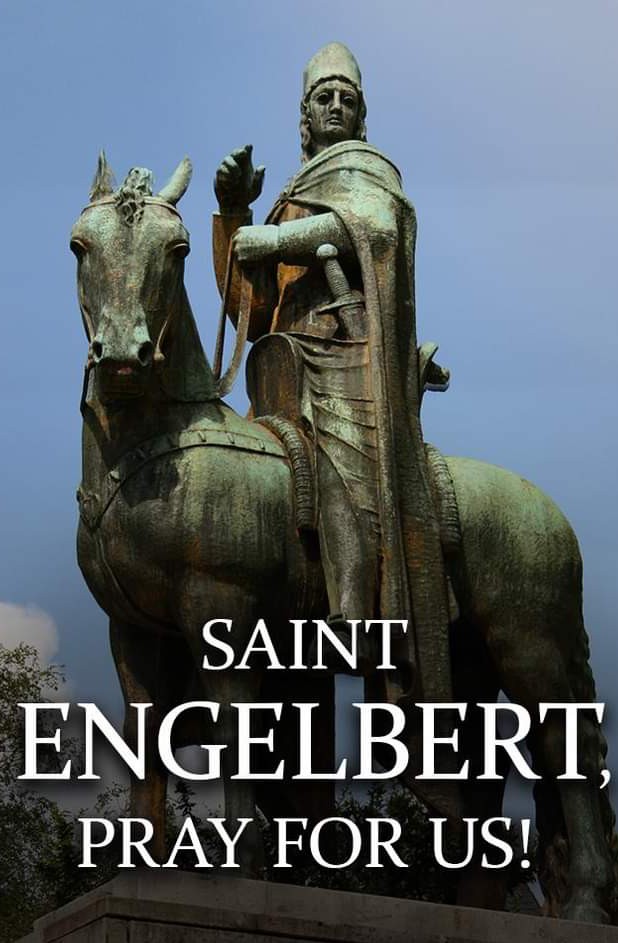 St. Engelbert of Cologne, pray for us.