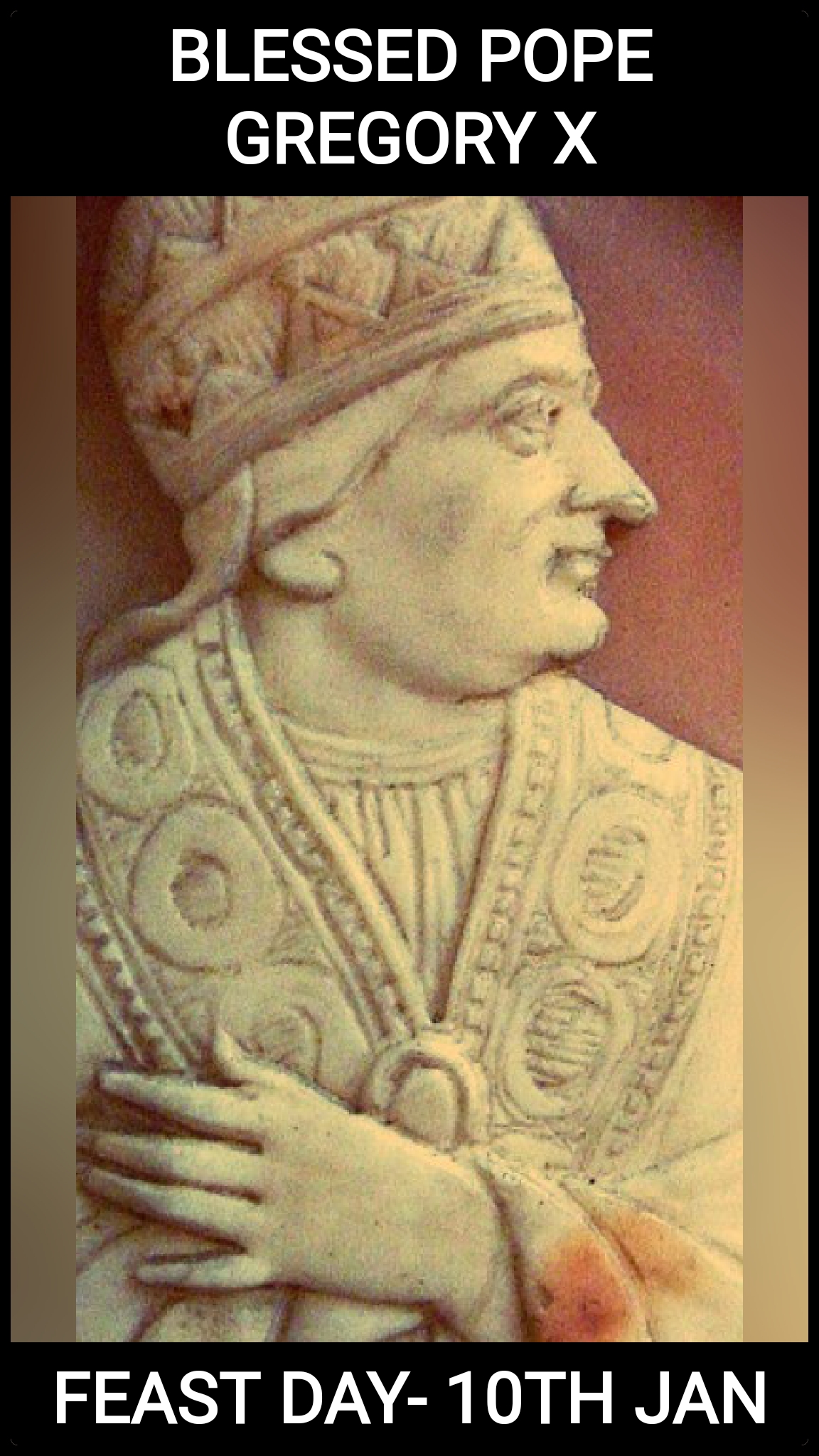 Blessed Pope Gregory X (1210 to 1276) was Bishop of Rome 1272 and Ruler of the Papal States until his death. He was elected on 1 September 1271 following the longest election in the history of the Church and ascended the throne on 27 March. He was a Third Order Franciscan. Born Teobaldo Visconti, in 1210 in Piacenza, Italy, he was a member of the illustrious Visconti family of Piacenza, was born in the City in 1210. In his youth, he was distinguished for his extraordinary virtue and his progress in his studies, especially of the Canon Law, which he began in Italy and pursued at Paris and lastly, at Liege.

He was Archdeacon of this last Church, when he received an order from the Pope to preach the Crusade for the recovery of the Holy Land. Incredible were the pains which he took in executing this commission and in reconciling the Christian Princes, who were at variance. When the Crusade faltered, a tender compassion for the distressed situation of the servants of Christ in those parts, moved the holy Archdeacon of Liege to undertake a dangerous pilgrimage to Palestine, in order to comfort them, and at the same time to satisfy his devotion by visiting the holy places.

In the interim, the See of Rome had been vacant for almost three years, from the death of Clement IV, in November 1268, the Cardinals, who were assembled at Viterbo, could not reach an agreement in the choice of a Pope. By common consent, they referred the election to six amongst them, who, on 1 September in 1271, nominated Teobald, the Archdeacon of Liege. Upon the news of his election, he prepared himself to return to Italy. Nothing could be more tender and moving than his last farewell to the disconsolate Christians of Palestine, whom he promised, in a most solemn manner, never to forget.

He arrived at Rome in March 1272 and was first Ordained Priest, then Consecrated Bishop and Crowned. He took the name of Gregory X and, to procure the most effectual succour to the Holy Land, called a General Council to meet at Lyons, where Pope Innocent IV had held the last in 1245. The fourteenth General Council, the second of Lyons, was opened in that City in May, 1274, in which were assembled five hundred Bishops and seventy Abbots.

The Council was closed by the fifth and last session, on 17 July. The more our holy Pope was overwhelmed with public affairs, the more watchful he was over his own soul and the more earnest in the interior duties of self-examination, contemplation and prayer. He spoke little, conversing assiduously in his heart with God. He was very abstemious in his diet and strict in the discipline he subjected himself to.

After the Council, he was taken up in measures for carrying out its decrees, particularly those relating to the Crusade in the East. By his unwearied application to business and the fatigues of his journey, in passing the Alps on his return to Rome, he contracted a distemper, of which he died at Arezzo, on 10 January, in 1276, three years and nine months after his Consecration and four years, four months, and ten days after his election. His name was inserted in the Roman Martyrology, published by Benedict XIV and he was Beatified on 8 July 1713, by Pope Clement XI. His patronage is the Diocese of Arezzo and Franciscan tertiaries.

God our Father, Blessed Pope Gregory X glorified your Holy Name by the splendor of his life and the rigors he applied to himself. Gregory’s faith was deeply embedded in Jesus, and by this crucified life, his soul was prepared to taste the hidden manna which is concealed in the divine word, with which he continually nourished it, in holy meditation.

Help us to live exemplary lives, looking at the lives of such great saints and giving you praise and glory. Through Jesus Christ, our Lord, who lives and reigns with you in the unity of the Holy Spirit, one God, for ever and ever. Amen 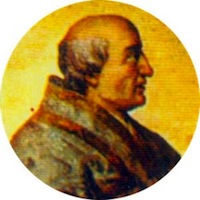