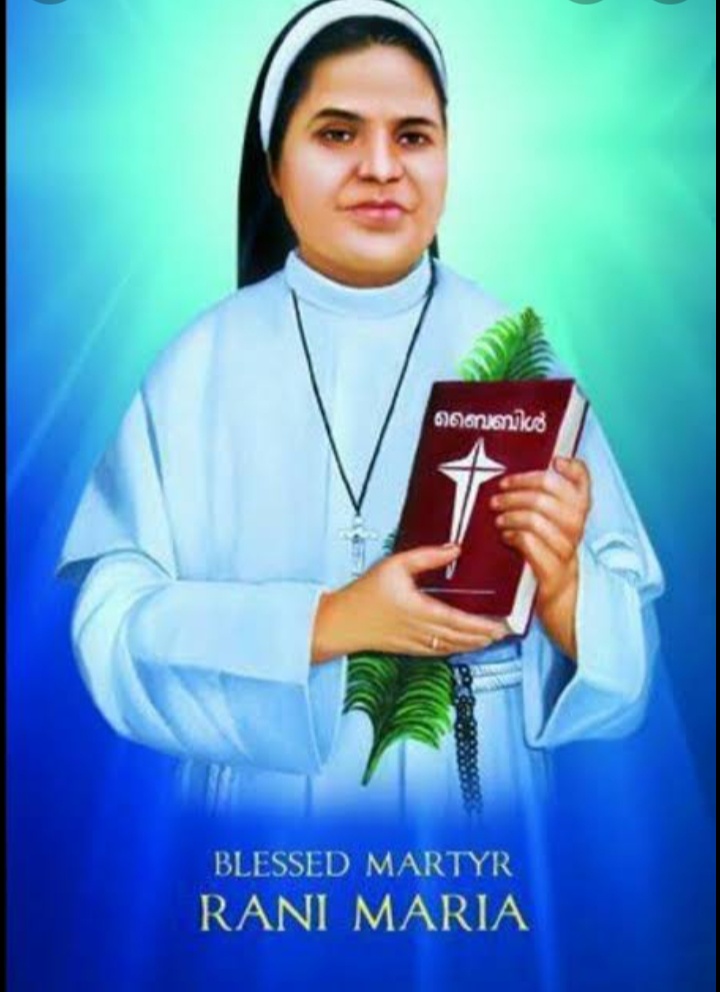 Sister Rani Maria was born on 29 January 1954 as the second child of Paily and Eliswa of Vattalil, in an ordinary peasant family. Her Baptism was on 5 February 1954 at St. Thomas Church Pulluvazhy and she was given the name ‘Mariam’ after Mother Mary, the mother of Jesus. Her God fearing parents brought her up in Christian faith and charity along with their six other children.

Marykunju (“Little Mary,” pet name) completed her Christian initiation by receiving the first Holy Communion and the Sacrament of Confirmation on 30 April 1966. From her infancy her parents and grandparents made her understand the importance of prayer. Even at the young age, she regularly attended the Holy Mass and took part in the popular devotions. She frequented catechism lessons and practiced what she learned in her day to day life.

Her schooling started with the ‘Kalari’ (the traditional form of pre-primary education), in which she spent two years. She was then sent to the Government Lower Primary School at Pulluvazhy where she was enrolled as V.P. Mary. After her primary schooling, she joined Jayakeralam High School Pulluvazhy. She also found time to help her father in the work of the fields and her mother in her domestic duties. She showed keen interest in and special love towards the servants and found time to chat with them.

In view of a good result in Secondary School Leaving Certificate examination, her parents sent her to St.Joseph’s High School Tripunithura. Under the supervision and the guidance of the nuns, her life in the school and in the boarding turned out to be very conducive to her spiritual and intellectual growth. She completed her studies successfully.

During the final year of her school, studies P. V. Mary felt the call of the Lord to embrace the consecrated life .She shared her inner promptings with her cousin Cicily (Sr.Soni Maria FCC) who too had the same desire. The frequent visit to the nearby convent and acquaintance with the FCC nuns enabled them to make a decision to enter the Franciscan Clarist Congregation. Mary had some anxiety about the reaction of her parents and relatives. One day she plucked up courage and openly expressed her desire to join the convent.

Her mistress during Aspirancy and Postulancy, Sr.Gladys testifies as follows about Mary: “She always had a smiling face and was a smart girl. She did everything to perfection and had no complaints about anything. Holding fast to what is true and just, she always spoke out things very openly. Sr.Rani Maria was accustomed to sanctify every hour reciting and humming ejaculatory prayers and sacred tunes. During her hours of work, her favourite ejaculatory prayer was “Jesus.” She kept up this habit of uttering the name “Jesus” till her very last breath. In fact she was heard repeating “Jesus, Jesus” right up to the end of her death agony.

Sr. Infant Mary who was her Novice Mistress has written in the biography of Sr. Rani Maria: “she was unique and exemplary in her prayer, studies, in the observance of the rules, in the responsibilities entrusted to her; in short, in everything. She was never annoyed about others or with others. She was impartial when called up to point out the defects of others, and she did so with precision. She was always much concerned about the will of God.”

As Provincial Councillor of Missions in North India, Sr. Infant Mary used to visit the missions and share her experiences with her novices, thus conveying to them the urgency of spreading the Good News among the millions of illiterate and ignorant people of North India. Thus, the seed of missionary vocation was sowed in the heart of novice Mary. Hearing the experiences of missionaries, her missionary zeal inflamed .She used to repeat: “I too want to go to North India, to serve the poor and die for them”.

“The Spirit of the Lord is upon me because He has anointed me to preach the Good News to the poor. He has sent me to proclaim release to the captives and recovering of sight to the blind, to set at liberty those who are oppressed, to proclaim the acceptable year of the Lord (Lk.4: 18)”. This Gospel verse was the motto of Sr. Rani Maria, who wrote it down in her personal recordings. She was convinced about her missionary call. For greater efficiency in her work as a missionary she decided to master the language of the place..

After her language study Rani Maria arrived at St. Mary’s Convent in diocese of Bijnor on 24th December1975. Owing to the lack of qualified local teachers, Sr. Rani Maria was appointed as a teacher in St. Mary’s School Bijnor, in spite of her desire to serve the poor in the villages.She served as a teacher for two years. During this period after the teaching hours, she was engaged in social ministry. On May 22, 1980 she made her final profession at St. Hormis Church, Ankamaly.

On 21 July 1983, Sr.Rani Maria was transferred to Odagady in the diocese of Satna, and was appointed coordinator of the social activities. She worked to uplift the poor and downtrodden. She organized educational programmes for the children, the young, and the aged. She conscientized the poor about their exploitation and enabled them to realize their rights and duties as citizens of India. As a result, she became the object of the displeasure of their oppressors, who looked upon her work to uplift the poor as attempts to convert them.

On 15 May 1992, Sr.Rani was transferred to Sneha Sadan, Udainagar. She arrived there on 18th May. As an experienced Social worker she made a thorough study of the tribals of the villages and realized that they had unconsciously fallen into the debt trap laid very cunningly by the Baniyas (tradesman) of Udainagar. Those villagers had become over dependant on the scrupulous money lenders who devoured their meagre earnings and property.

The poor were not aware of the grants that government had allotted for their socio-economic development. Through various conscientization programmes Sr.Rani Maria made them aware of their rights and injustice perpetrated on them. Thus, poor of Udainagar became active citizens and started to free themselves from the bondage to their heartless moneylenders.

On 25th February 1995, Sr.Rani Maria rose early in the morning. She had to take the first bus to Indore and from there go to the Provincial House, Bhopal and then proceed down to Kerala. The late Sr. Liza Rose describes, “When I reached the Chapel for the morning prayers Sr. Rani Maria had already reached the Chapel before everybody else. After the morning prayers we assembled in the refectory while Sr. Rani was having her breakfast. As it was her custom, before leaving the house she picked up the bible to read God’s Word. She got the Word ‘Do not be afraid. I have carved your name on the palm of my hands’ (Is.49: 16).

Accompanied by two sisters Sr. Rani reached the bus stand only to be told that the bus trip was cancelled. While they were returning, they saw the bus by which she was to travel. Sr. Liza Rose told the conductor to reserve one seat for Sr. Rani Maria. When the bus arrived in front of the convent, the Sisters bade her farewell. A young man dressed in white, kept her bag near the driver and asked her to sit in the back seat.

This was something unusual in Udainagar. The sisters were always given the front seat in the bus. Among the fifty or so passengers there were three, seated in different parts of the bus, but united in one thing: the determination to murder Sr. Rani. Jeevan Singh, the leader of the group was seated in the back seat of the bus together with Dharmendra, his bodyguard. The third man was Samundar Singh, a youth of 28, who took his seat near Sr. Rani Maria.

Jeevan Singh began to insult her saying: “Why have you come here from Kerala? Have you come to convert these poor tribal people to Christianity? We will not allow that.” The bus reached a jungle about 20 kms from Udainagar. Samundar rose from his seat and asked the driver to stop the bus. He got down from the bus and broke a coconut against a rock on the road side. With pieces of the broken coconut in his hands he re-entered the bus and distributed them among the passengers.

He offered a piece to Sr.Rani Maria but suddenly withdrew it as if to fool her. She asked him, “Why are you so overjoyed today?” Drawing out a knife he said, “Just for this,” and thrust it into her stomach, stabbing her repeatedly, till she was dead. The post-mortem registered 40 major injuries besides 14 bruises. Unto the last she kept on saying “Jesus! Jesus!” The beatification process opened on 26 September 2003 after the title Servant of God was conferred upon her and the Congregation for the Causes of Saints granted the “nihil obstat” (‘nothing against’) to the cause.

The subsequent diocesan process took place in Indore from 29 June 2005 to 28 June 2007 and received C.C.S. validation in Rome on 27 November 2009. On 11th February 2016, consulting theologians voiced their approval to the cause. Pope Francis approved the cause on 23 March 2017 and confirmed that Sr.Rani Mariya would be beatified on 4 November 2017 in Indore.
(Source: ranimaria.jayesu.com)

Dear God, may the sacrifice of Blessed Rani Maria liberate exploited farmers and poor workers of India, to whom she dedicated her life, that their sweat and tears may find answer in the redemptive plan of Jesus our Lord who himself came to set the slaves free. Amen 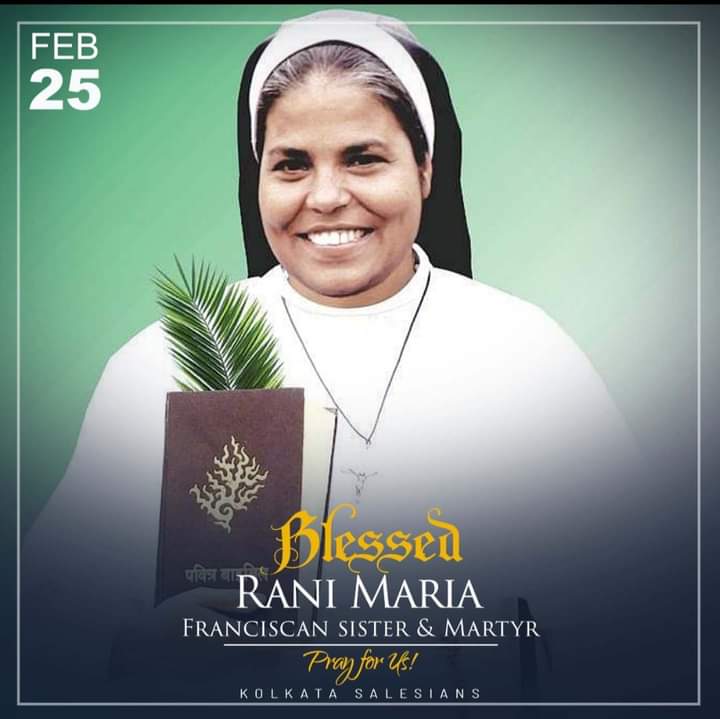