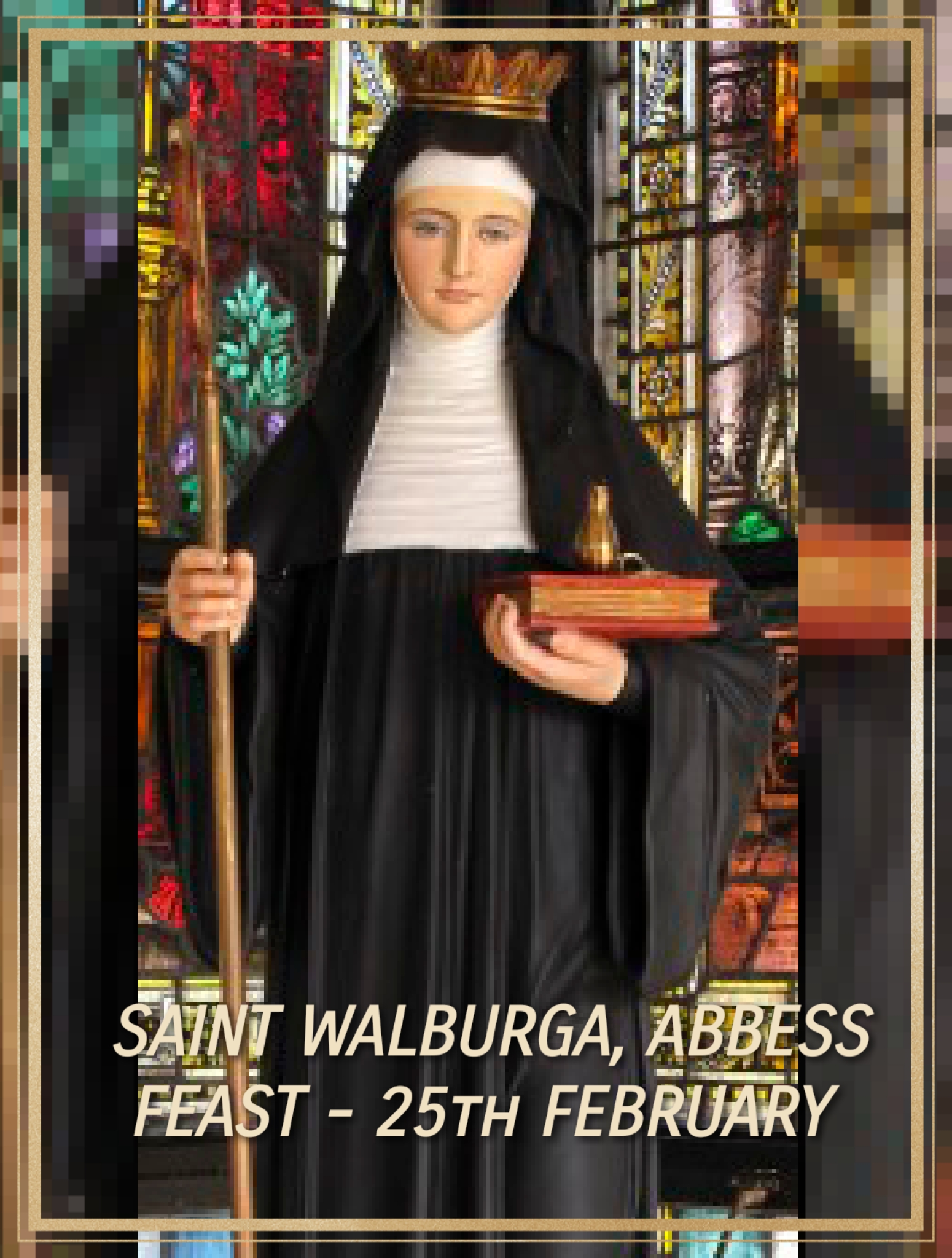 St. Walburga was born around 710 (c.710 – February 25, 777). She was an English missionary to the Frankish Empire. She was canonized (made a saint) on 1 May c. 870 by Pope Adrian II. She is the daughter of St. Richard and the niece of St. Boniface. When St. Richard set out for a pilgrimage to the Holy Land with his sons, St. Willibald & St. Winibald, he entrusted 11 year old Walburga to the monastery school at Wimborne. She remained as a nun, spending a total of 26 years there.

The monastery was famous for holiness and austere discipline. There was a high standard at Wimborne, and the child was trained in solid learning, and in accomplishments suitable to her rank.
Thanks to her rigorous training, she was later able to write St. Winibald’s biography and an account in Latin of St. Willibald’s travels in Palestine. She is often credited with being the first female author of both England and Germany.

When St. Boniface put out an appeal for nuns to help him in the evangelization of Germany, St. Walburga answered the call. On the way to Germany, there was a terrible storm at sea. Walburga knelt on the deck of the ship and prayed. The sea immediately became calm. Some sailors witnessed this and spread the word that she was a wonderworker, so she was received in Germany with great respect.

At first, she lived at Bischofsheim, under the rule of St. Lioba. Then she was made abbess at Heidenheim, near to where her brother, Winibald served as an abbot over a men’s monastery. After his death, she ruled both monasteries. She worked many miracles in the course of her ministry. One night when Walburga asked one of the monks to light the candles so that she could go to her room, he refused. Walburga had to find her way alone in the darkness.

When her sisters came to accompany her to supper, the hallway was lighted, but by a divine light. The nuns went to Walburga, filled with joy over the miracle, and she prayed to the Lord in these words: “Oh Lord, as a humble maid who committed my life to you since my youth, I thank you for granting this grace. You have honored me in my unworthiness with the comfort of your light. This sign gives courage to the souls of your handmaids who are dependent on me. And you have driven out the darkness and our fear through the bright light of your mercy.”

There is a tradition in the Church of Antwerp that, on her way to Germany, Walburga made some stay there; and in that city’s most ancient church, which now bears the title of St. Walburga, there is pointed out a grotto in which she was wont to pray. This same church, before adopting the Roman Office, was accustomed to celebrate the feast of St. Walburga four times a year.

On September 23, 776, she assisted Willibald in translating the uncorrupt relics of their brother, Winibald, to a new tomb in the church at Heidenheim. Shortly after this, she fell ill. Willibald cared for her until she died on February 25, 777, then placed her next to Winibald in the tomb. After St. Willibald’s death in 786, people gradually forgot her, and the church fell into disrepair. In 870, Bishop Oktar was having Heidenheim restored. Some workmen desecrated Walburga’s grave. She appeared in a dream to the bishop, who then translated her relics to Eichstätt, where her bones were placed in a rocky hole in the wall.

The bones began to produce a miraculously therapeutic oil. This made people come to her shrine. It was found to work miraculous healings. The liquid, called St. Walburga’s oil, has flowed from her body, ever since, except for a brief period when the church was put under the interdict after robbers shed the blood of a bell-ringer in the church. Portions of St. Walburga’s relics have been taken to several other cities and her oil to all parts of the world.

The earliest picture of Walburga is from the early 11th century. It comes from the Hitda Codex, which was made in Cologne. It shows her holding stylized stalks of grain. The grain can be seen as an example of where a Christian saint took over from an older pagan concept, in this case of the Grain Mother. She is invoked as special patroness against hydrophobia, against dog bites, against famine, against mad dogs, against plague, against rabies, boatmen, farmers, harvests, mariners, sailors, watermen and in storms.

St. Walburga, by your blessed life of love, God blessed you with the power to heal, to make whole the soul as well as the body. Beg for us what we cannot obtain for ourselves, and heal our world of sickness and sorrow.

May God hear you, who lived so graciously for His glory, and send us the healing grace we need, through your powerful intercession. Amen 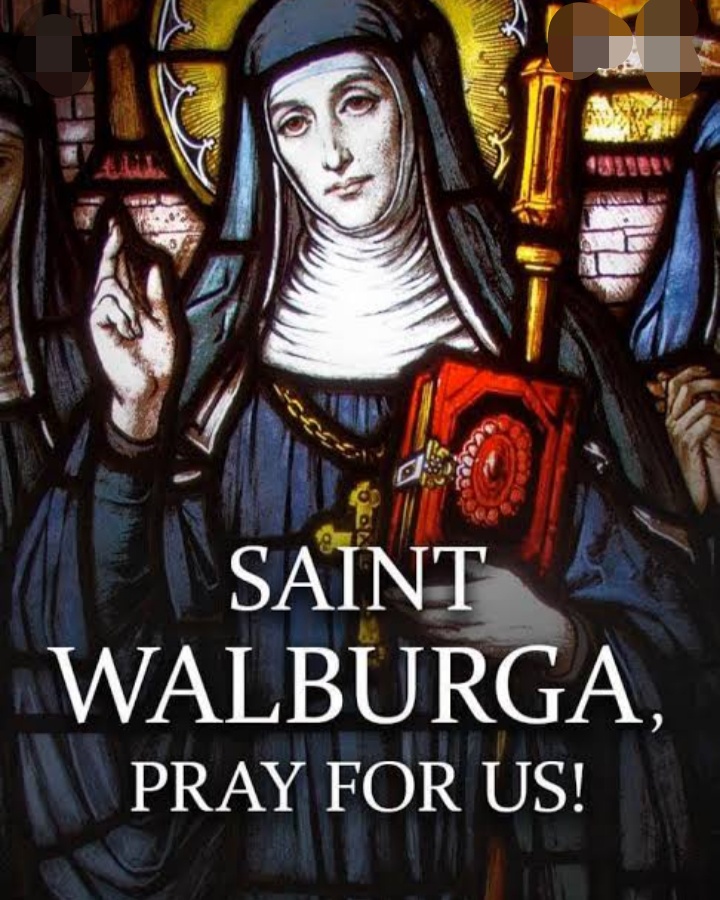