FEAST OF OUR LADY OF LORETO – 10th DECEMBER 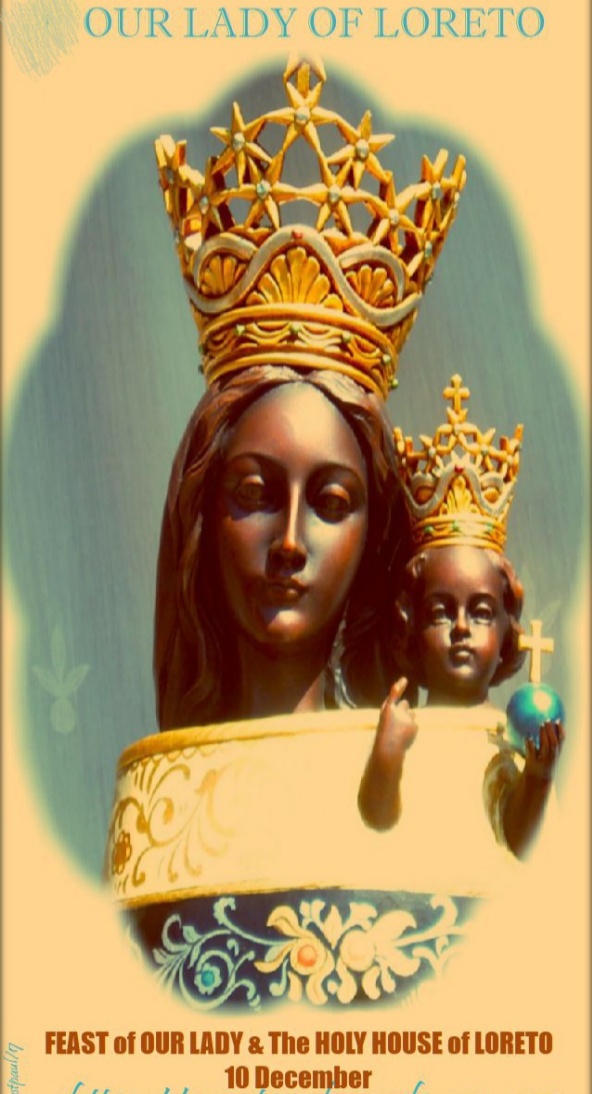 FEAST OF OUR LADY, THE VIRGIN MARY, OF LORETO
FEAST DAY – 10th DECEMBER

The Church celebrates the feast of Our Lady of Loreto, on 10th December. Loreto is the holy house in which Mary took birth, and that’s the same holy place where the Archangel Gabriel appeared to her at the Annunciation. The Basilica della Santa Casa (English: Basilica of the Holy House) is a Marian shrine. Pious legends claim the same house was flown over by angelic beings from Nazareth to Tersatto (Trsat in Croatia), then to Recanati, before arriving at the current site.

Because of this flight, Our Lady of Loreto is considered the patron of people involved in aviation. The long life of the house led to her becoming patron of builders and construction workers. This is the first shrine of international acclaim dedicated to Mary. Popes have had a special connection to this Holy Shrine of Loreto, and it is under their direct authority and protection.

The basilica is also known for enshrining the Madonna and Child image of “Our Lady of Loreto”. Pope Benedict XV designated the religious image as patroness of air passengers and auspicious travel on 24 March 1920. Pope Pius XI granted a Canonical Coronation to the venerated image made of Cedar of Lebanon on 5 September 1922, replacing the original Marian image consumed in fire on 23 February 1921.

Our Lady of Loreto is the title of the Virgin Mary with respect to the Holy House of Loreto and the image displayed therein. In the 1600s, a Mass and a Marian litany was approved. The “Litany of Loreto” is the Litany of the Blessed Virgin Mary, one of the five litanies approved for public recitation by the Church. The Russian icon of the Mother of God “Addition of Mind” is based on the image of Our Lady of Loreto.

In October 2019 Pope Francis restored to the universal Roman calendar, the feast of Our Lady of Loreto, as an optional memorial commemorated on December 10. In 1920 Pope Benedict XV had declared the Madonna of Loreto patron saint of air travellers and pilots. Putting the celebration of the feast day on the universal calendar “will help all people, especially families, youth and religious to imitate the virtues of the perfect disciple of the Gospel, the Virgin Mother, who, in conceiving the head of the church also accepted us as her own,” the decree said.

The decree, dated Oct. 7, feast of Our Lady of the Rosary, was published Oct. 31 by the Vatican Congregation for Divine Worship and the Sacraments. According to tradition, the Holy House of Loreto was carried by angels from Nazareth to the Italian hillside town of Loreto the night of Dec. 9-10 in 1294 after making a three-year stop in Croatia. Tradition holds that the small house, made of three stone walls, is the place where Mary was born, where she was visited by an angel and conceived Jesus through the Holy Spirit, and where the Holy Family later lived.

The decree said the shrine in Loreto “recalls the mystery of the Incarnation” and helps visitors “meditate both on the words of the angel announcing the Good News and on the words of the Virgin in response to the divine call.” And it has been able to “illustrate powerfully the evangelical virtues of the Holy Family,” it added.

Millions of pilgrims flock to Loreto each year to venerate the tiny cottage. It is Italy’s most important and popular Marian shrine city and it was one of the shrines St. John Paul II visited the most. “Before the image of the Mother of the Redeemer and of the church, saints and blesseds have responded to their vocation, the sick have invoked consolation in suffering, the people of God have begun to praise and plead with Mary using the Litany of Loreto, which is known throughout the world,” the decree said.

Oh Mary, Immaculate Virgin, for the sake of your blessed house, which the angels moved to the pleasant hills of Loreto, turn your benevolent eyes toward us. For the holy wall within which you were born and lived as a child, with prayers and the most sublime love; for the fortunate walls that listened to the greetings of the angel who called you: “Blessed among all women” and which remind us of the incarnation of the word in your purest bosom; for your blessed house, where you lived with Jesus and Joseph, and which became during the centuries the fervently longed-for destination of the saints, who considered themselves lucky to kiss fervently your sacred walls. Bestow upon us the graces which we humbly ask, and the fortune of coming to heaven after the exile, to repeat to you the greetings of the angel. (Recite the Hail Mary) . 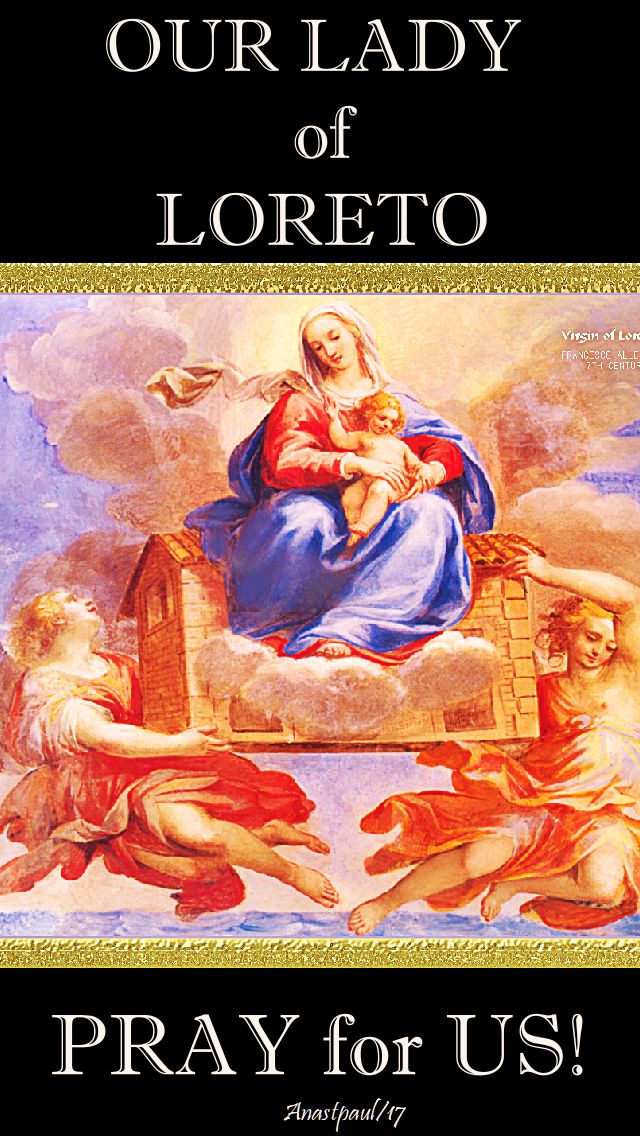