FEAST OF OUR LADY OF LOURDES – 11th FEBRUARY 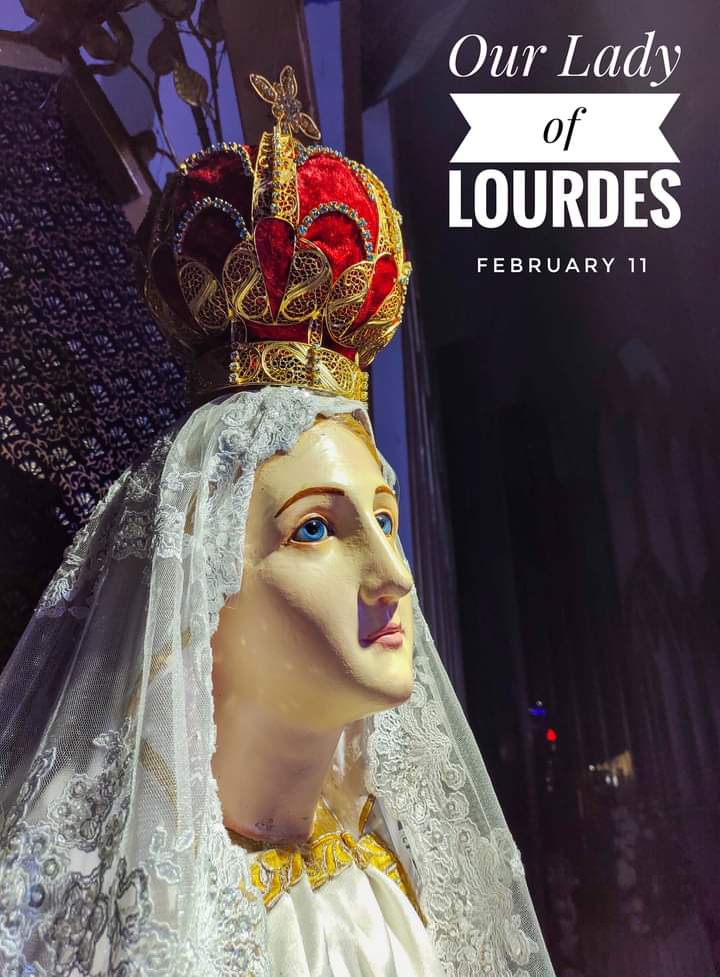 February 11th marks the first apparition of the Blessed Virgin Mary in 1858 to fourteen-year-old Marie Bernade (St. Bernadette) Soubirous. Between February 11 and July 16, 1858, the Blessed Virgin appeared eighteen times, and showed herself to St. Bernadette in the hollow of the rock at Lourdes. On March 25 she said to the little shepherdess who was only fourteen years of age: “I am the Immaculate Conception.” Since then Lourdes has become a place of pilgrimage and many cures and conversions have taken place. The message of Lourdes is a call to personal conversion, prayer, and charity.

The many miracles which have been performed through the intercession of the Blessed Virgin at Lourdes prompted the Church to institute a special commemorative feast, the “Apparition of the Immaculate Virgin Mary.” The Office gives the historical background. Four years after the promulgation of the dogma of the Immaculate Conception (1854), the Blessed Virgin appeared a number of times to Bernadette, who was a poor and holy girl. The actual spot was in a grotto on the bank of the Gave River near Lourdes.

The Immaculate Conception had a youthful appearance and was clothed in a pure white gown and mantle, with an azure blue girdle. A golden rose adorned each of her bare feet. On her first apparition, February 11, 1858, the Blessed Virgin bade the girl make the sign of the Cross piously and say the rosary with her. Bernadette saw her take the rosary that was hanging from her arms into her hands. This was repeated in subsequent apparitions.

With childlike simplicity Bernadette once sprinkled holy water on the vision, fearing that it was a deception of the evil spirit; but the Blessed Virgin smiled pleasantly, and her face became even more lovely. The third time Mary appeared she invited the girl to come to the grotto daily for two weeks. Now she frequently spoke to Bernadette. On one occasion she ordered her to tell the ecclesiastical authorities to build a church on the spot and to organize processions. Bernadette also was told to drink and wash at the spring still hidden under the sand.

Finally on the feast of the Annunciation, the beautiful Lady announced her name, “I am the Immaculate Conception.”

The report of cures occurring at the grotto spread quickly and the more it spread, the greater the number of Christians who visited the hallowed place. The publicity given these miraculous events on the one hand and the seeming sincerity and innocence of the girl on the other made it necessary for the bishop of Tarbes to institute a judicial inquiry. Four years later he declared the apparitions to be supernatural and permitted the public veneration of the Immaculate Conception in the grotto. Soon a chapel was erected, and since that time countless pilgrims come every year to Lourdes to fulfill promises or to beg graces.
—Excerpted from The Church’s Year of Grace, Pius Parsch.

February 11 was proclaimed World Day of the Sick by Pope John Paul II. Therefore, it would be appropriate to celebrate the Sacrament of the Anointing of the Sick on this day during a Mass or Liturgy of the Word. (The Sacrament of the Anointing of the Sick is only to be given to “those of the faithful whose health is seriously impaired by sickness or old age,” Roman Ritual. This Sacrament must not be given indiscriminately to all who take part in Masses for the sick.)

Anyone who has made a pilgrimage to the Shrine of Lourdes will not have missed the opportunity to pray at the Grotto where the Blessed Virgin Mary appeared on the 11th of February 1858. A mystical place, similar to the welcoming “bosom” of a mother, almost a baptismal font, in which to immerse ourselves and rediscover the unrivalled beauty of being Christians: having God as our Father and Mary as our Mother!

Lourdes is one of the most important “places of grace” known to the Church. It is like a vast basin of purity where countless souls have removed the clothes of sin and put on the snow white garments of spiritual rebirth! Some found the light necessary to embrace the call to the priesthood, others, the strength to remain faithful to this commitment.

How can we deny that the Mother is the one who knows the Will of the Son better than anyone else and that turning to her we understand better the mysterious plan God has for each one of us? No one better than Mary can convince us to “do whatever he tells you”!

In Lourdes, like the servants at Cana, we too sincerely open our hearts to the presence of the Mother and, attentive to her words, we are captivated by the mystery of the Son. Then we see His Will for what it truly is: our path to happiness!

Bernardette actually saw the Lady dressed in white, whereas we see her not with our eyes but with our heart, which is aware in faith of her presence on our journey. In front of the Grotto of Massabielle the pilgrim’s interior vision is illuminated with a light typical of that place of grace: the light of the spiritual motherhood of Mary who gives Jesus to us as at Christmas, again and again.

Those apparitions have sustained countless souls, encouraging them on the path of conversion and personal sanctification. And their change has helped improve the world because the whole world benefits from the conversion of even one heart.

For us, pilgrims to Lourdes, Mary’s universal motherhood is a mystery to discover again and again, so she may accompany us all through life. In Lourdes this Marian light is present everywhere: when we bathe in the waters, in the evening when we mingle with thousands of others to pray the rosary at the torchlight procession; in the afternoon when we join crowds of sick persons taking part in the Blessed Sacrament Procession.

Her presence is a mystery to savor in our soul and to learn, with Mary, to honour her Son, especially in the Holy Sacrifice of the Mass and the Sacrament of Reconciliation. The first to witness Our Lady’s presence at Lourdes was little Bernardette Soubirous, who became her intrepid messenger. Although she is buried far away in Nevers in the north of France, her body totally incorrupt, as if she were asleep, you can “meet” Saint Bernadette everywhere in Lourdes.

It is sweet to remember her and read the humble words she addressed to Our Lady: “Yes, gentle Mother, you lowered yourself, you came down to earth to appear to a helpless little girl… You, the Queen of Heaven and earth, deigned to make use of what was most humble for the world” (from her Journal dedicated to the Queen of Heaven, 1866).

The Holy Father Pope Benedict XVI, recalling that “this year (2008) the beginning of Lent coincides providentially with the 150th anniversary of the first apparition of Our Lady at Lourdes”, said in his Angelus reflection on the 1st Sunday of Lent “the message which Our Lady still offers at Lourdes recalls the words Jesus said at the beginning of his public mission and that we hear so often in these first days of Lent: ‘Convert and believe in the Gospel, pray and do penance. Let us respond to the call of Mary who echoes that of Christ and let us ask Her to help us ‘enter’ Lent with faith and live this season of grace with deep joy and generous commitment” (Benedict XVI, Angelus 10 February 2008). (Agenzia Fides 13/2/2008; righe 47, parole 662)
—Mgr. Luciano Alimandi 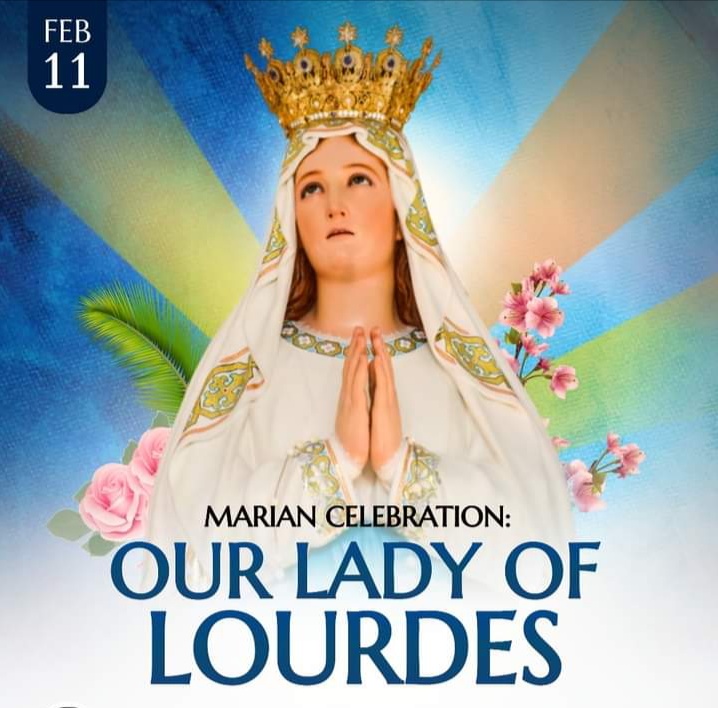 Keep your family safe, O Lord, with unfailing care, that, relying solely on the hope of heavenly grace, they may be defended always by your protection.

Grant us, O merciful God, protection in our weakness, that we, who keep the Memorial of the Immaculate Mother of God, may with her intercession, rise up from our iniquities. Through our Lord Jesus Christ, your Son, who lives and reigns with you, in unity of the Holy Spirit, God, for ever and ever. Amen

Ever Immaculate Virgin Mother of Mercy, Health of the sick, refuge of sinners, Comforter of the afflicted, you know my wants, my troubles, my sufferings; look with mercy on me.

Holy Mary, Mother of God, Virgin Immaculate, you appeared 18 times to Bernadette at the grotto in Lourdes to remind Christians of what the truths in the Gospel require of them. You call them to prayer, penance, the Eucharist and the life of the church. Through your intercession may we be granted God’s blessings, in Jesus’ Name. Amen 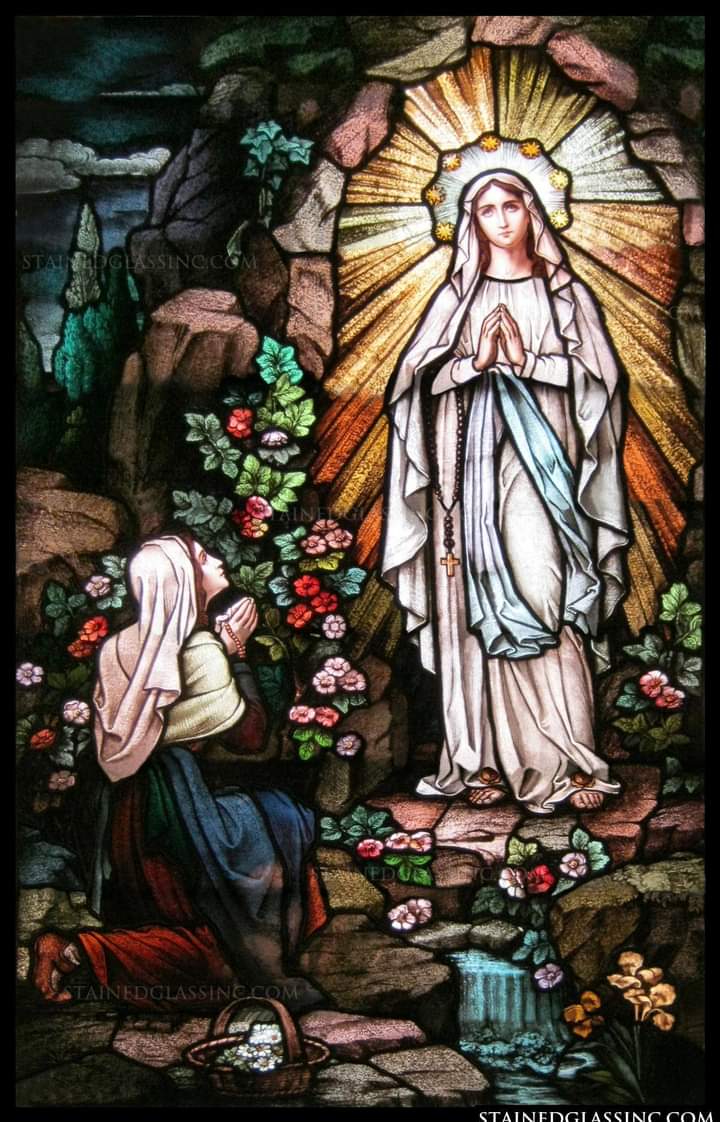