FEAST OF SAINT CYRIL OF ALEXANDRIA, BISHOP AND DOCTOR OF THE CHURCH – 27th JUNE

FEAST OF OUR LADY OF PERPETUAL HELP – 27th JUNE 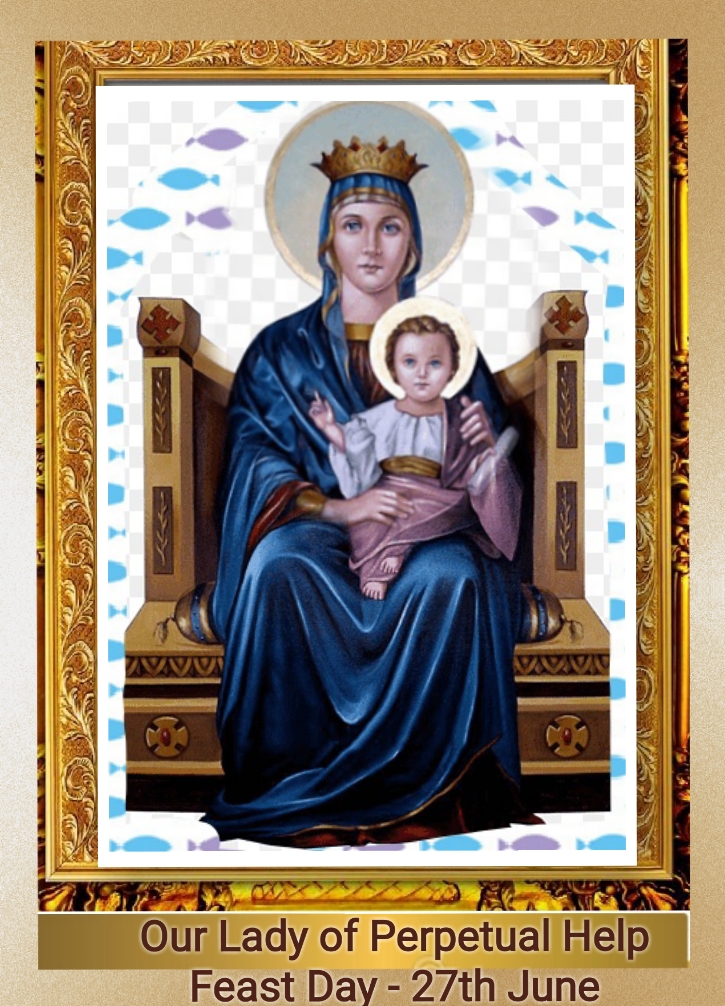 THE FEAST OF OUR LADY OF PERPETUAL HELP

When Jesus saw his mother there, and the disciple whom he loved standing nearby, he said to her, “Woman, here is your son”, and to the disciple, “Here is your mother”. From that time on, this disciple took her into his home. – John 19: 26-27

Our Mother of Perpetual Succour or Our Lady of Perpetual Help is a title given to the Blessed Virgin Mary, associated with the Byzantine icon of the same name, said to be from the 13th or 14th century, or perhaps 15th century, which has been in Rome since the late 15th century. 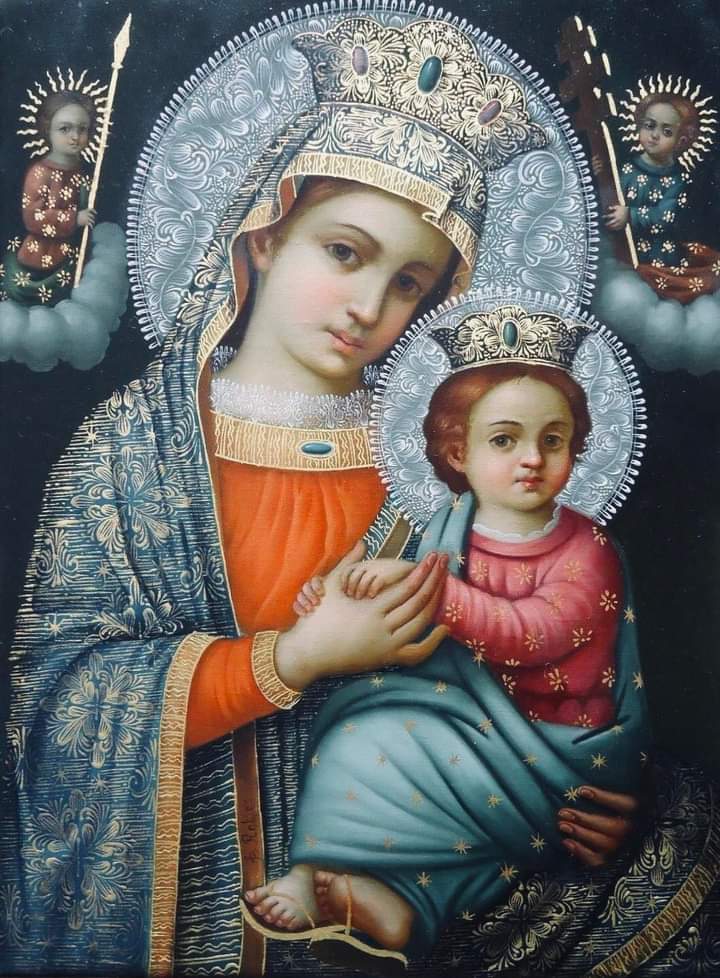 The icon depicts the Blessed Virgin Mary in a dress of dark red with blue mantle and veil. On the left is the archangel Michael, carrying the lance and sponge as instruments of Jesus Christ’s crucifixion. On the right is the archangel Gabriel carrying a 3-bar cross and nails. The Christ-child has been alarmed by a pre-sentiment of his Passion, and has run to his mother for comfort.

The facial expression of the Virgin Mary is solemn and is looking directly at the viewer instead of her son. The Greek initials on top read Mother of God, Michael Archangel, Gabriel Archangel, and Jesus Christ, respectively. Jesus is portrayed clinging to his mother with a dangling sandal.

The earliest written account of the image comes from a Latin and Italian plaque placed in the church of Saint Matthew where it was first venerated by the public in 1499. The writer of the icon is unknown, but according to legend the icon was stolen by a merchant from Crete who was sailing to Rome. 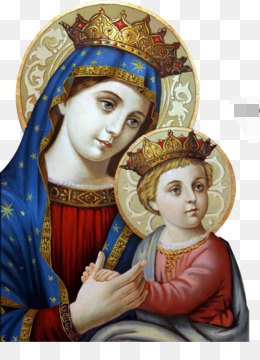 When the merchant arrived in Rome he fell ill, and as his dying wish he asked another merchant to place the icon in a church where it could be venerated. The merchant then confided to his wife about the icon. Upon seeing the beautiful icon, the merchant’s wife refused to give it to the church but instead hung it in her home.

Later on, the Virgin Mary appeared to the merchant’s daughter, requesting that the icon be turned into a parish for veneration. The Virgin Mary indicated to the little girl that she ought to be placed between the basilicas of St. Mary Major and St. John Lateran. The wife then went to the Augustinian Friars to whom she gave up the icon. On March 27, 1499, the icon was transferred to the church and was venerated there for 300 years.

Pope Pius IX had invited a group of priests called the Redemptorists to set up a Marian house of veneration in Rome. One day, a Redemptorist father heard stories of the icon and of the church in which it was once enshrined. The Fr. General of the Redemptorists, decided to bring the matter to the attention of Pope Pius IX. 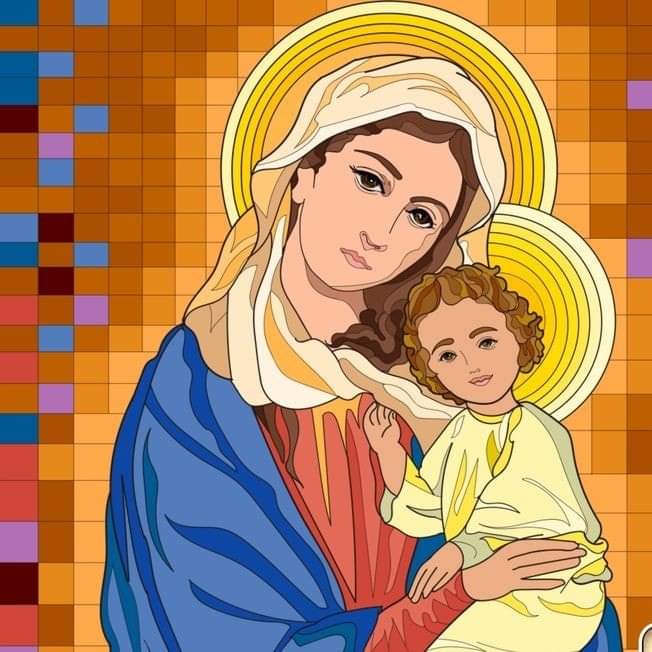 Since then, the icon has been venerated all around the world. According to tradition, when handing over the Icon to the Redemptorist in 1866, Pope Pius IX expressed the desire that they should make her known to the world. From that time until present day, devotion to the Mother of Perpetual help has spread all over the world and there are many shrines where copies of the original Icon are venerated and regarded as miraculous.

The Novena has been called “Perpetual”, because it is held on a fixed day each week of the year. During the Novena devotions, the faithful not only say the traditional prayer, but they also present written petitions and thanksgivings for favors received. 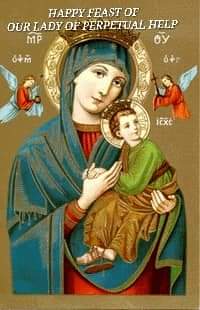 O Mother of Perpetual Succour, you have seen the wounds of your Son and His blood shed for our salvation, and thus, we confidently apply for your help. Jesus, your Son, always met the supplications with which you humbly approached him.

Because of this, we intercede for your aid and beseech you to obtain for us the compassionate plea of which we are in dire need. O Mary, most admirable among women, we pray that you gain for us the favor we seek to attain from Jesus, Who is the fount of goodness and kindness. 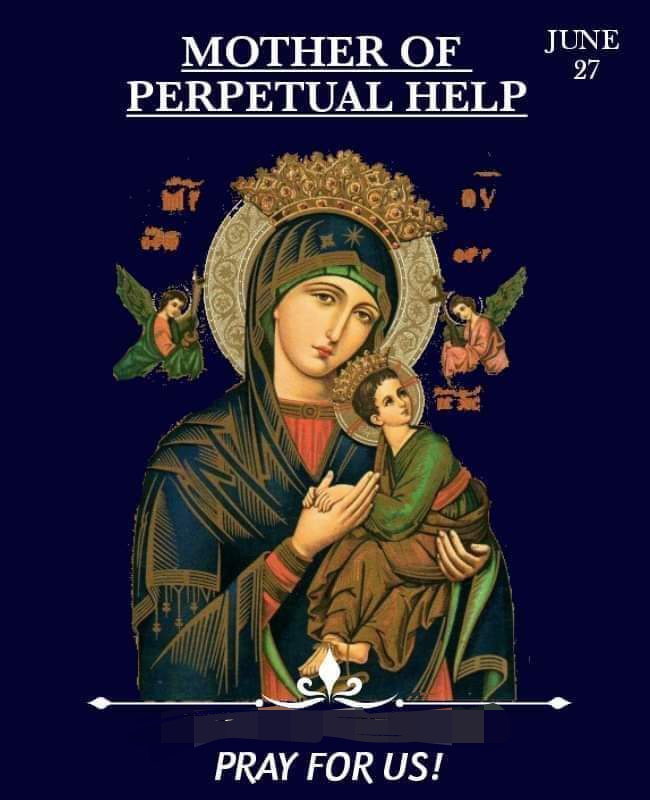 Although we are not worthy of any merit, by faith and trust we acknowledge your intercession and know that you never turn away anyone pleading for your help, love and motherly protection. For the infinite love that you have for Jesus, your Son, and our Redeemer, for the sake of all souls faithful to you, we trust you will provide for us, the graces and favors we ask of you, and which you place before Jesus, your Son and our Lord. Amen 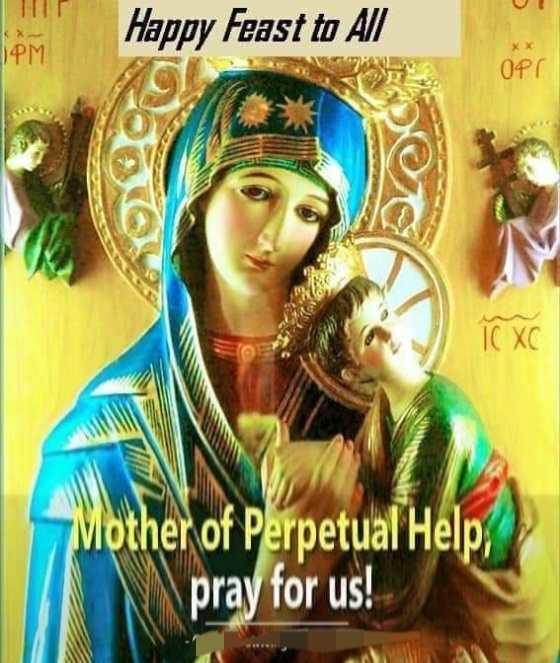