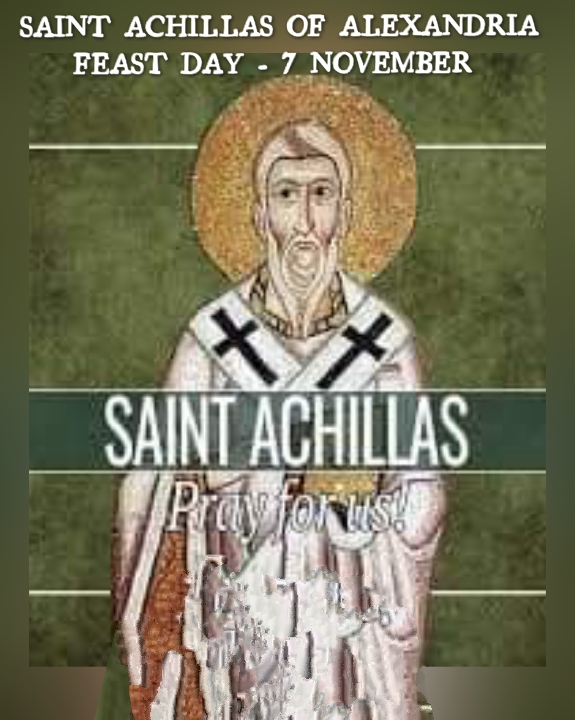 Achillas of Alexandia is less well-known than his contemporary Arius. But while one has gone down in history as one of the most notorious of all heretics, the other is honoured as one who kept the faith. Achillas was, through and through, a man of Alexandria ,where he was born some time in the 3rd century. The city was one of the theological centres of Christendom, which made it an attractive target for heretics.

Achillas was the 18th Patriarch of Alexandria, reigning from 312 to 313. He was born in Alexandria, Egypt, and was renowned for his knowledge and piety. Pope Theonas had ordained him priest and appointed him head of the Catechetical School of Alexandria upon the departure of Pierius. Sabellius showed up in the early 3rd century, teaching that the Father, Son and Holy Spirit were different modes of one divine person.

St Theonas, Pope of Alexandria, excommunicated Sabellius. His successor, Peter, had to contend with Meletius, who preached that those who had fallen away in persecution would have to be re-baptised. Peter also disciplined Arius. Bishop and theologian who lived in an era of dispute, Achillas became the bishop of Alexandria, Egypt. Succeeding St. Peter, the Martyr, Achillas ordained Arius, who was to begin the influential heresy of Arianism.

As a former head of Alexandria’s catechetical school, Achillas was unlikely to be deceived by theological error. But he was able to be deceived by as smooth an operator as Arius, who seemed to have convinced Achillas that he, Arius, had changed and should be allowed back into the fold of the Church. Achillas eventually realised his mistake and opposed Arius publicly. He died without seeing the final victory of orthodoxy. St Jerome lamented that, “because as a spark in Alexandria he was not put out, Arius became a conflagration that laid waste the world.”

But for all his efforts, Achillas has nevertheless been recognised as a saint. When Achillas recognized the untruths in Arius’ preaching, he took steps to defend the faith and was attacked by Arius and another heretical group called the Meletians. Achillas remained firm in the faith. A council held in Alexandria condemned Arius and forced him to flee to Palestine. Achillas, however, died in 313, without witnessing his victory in defense of the faith. His Feast day is November 7.

Almighty God, you have given us the example of the great lives of saints, who, lived lives of piety and truth and defended the faith against heretics of the Church. Grant that by the life of valor and faithfulness led by Saint Achillas of Alexandria, who died early, but brought powerful reforms for the betterment of the congregation of Christians under his care, we may learn to dedicate our lives to truth and selflessness, in Jesus’ Name. Amen

Saint Achillas of Alexandria, pray for us.