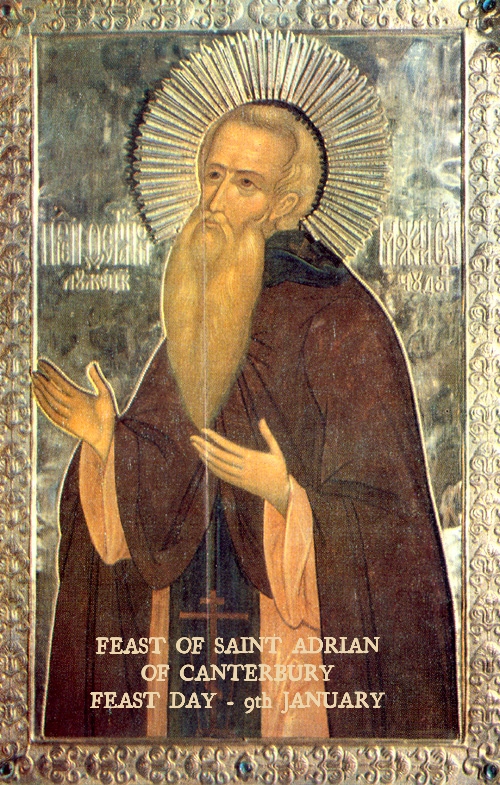 Adrian, also spelled Hadrian (born before 637, died 710), was a North African scholar in Anglo-Saxon England and the abbot of Saint Peter’s and Saint Paul’s in Canterbury. He was a noted teacher and commentator of the Bible. Adrian was born between 630 and 637. According to Bede, he was “by nation an African”, and thus a Berber native of North Africa, and was abbot of a monastery near Naples, called Monasterium Niridanum or Nisidanum, as being situated on the island of Nisida.

He was twice offered the vacant archbishopric of Canterbury, by Pope Vitalian, but modestly declined the appointment. He first recommended that it should be given to Andrew, a monk belonging to a neighboring monastery, who also declined on the plea of advanced years. Then, when the offer was again made to Adrian, he introduced to the pontiff his friend Theodore of Tarsus, who then chanced to be at Rome, and who consented to undertake the charge. Vitalian, however, stipulated that Adrian should accompany the new archbishop to Britain. He gave as his reasons that Adrian, having twice before made a journey into Gaul, knew the road and the mode of travelling.

The two set out from Rome on 27 May 668, and proceeding by sea to Marseille, crossed the country to Arles, where they remained with John, the archbishop, till they got passports from Ebroin, who ruled that part of Gaul as Mayor of the Palace, for the minor king Clotaire III. Having then made their way together to the north of France, they parted company, and went severally to reside for the winter, Theodore with Agilbert, bishop of Paris, Adrian first with Emmon, bishop of Sens, and afterwards with Faro, bishop of Meaux. Adrian was detained by order of Ebroin, who is said to have suspected him of being an emissary of the Greek emperor sent to stir up troubles against the kingdom of the Franks.

At length, however, the tyrant became convinced that there was no ground for this notion, and Adrian was permitted to proceed to England, where, immediately on his arrival, he was made abbot of the monastery of Saints Peter and Paul (afterwards called Saint Augustine’s) at Canterbury, an appointment which was in conformity with instructions given by the pope to Theodore. Such is the account given in the Ecclesiastical History. Adrian was known to be a man learned in the Bible, as well as in Greek and Latin, and an excellent administrator. Under his direction the abbey came to have substantial, far-reaching influence.

Bede describes Adrian (or Hadrian, as he calls him in the Ecclesiastical History), as not only a distinguished theologian, but eminently accomplished in secular learning; he and Theodore, we are told, traversing all parts of the island, gathered multitudes of scholars around them wherever they appeared, and employed themselves daily with equal diligence and success in instructing those who flocked to them not only in the truths of religion but in the several branches of science and literature then cultivated. Bede particularly mentions the metrical art, astronomy, and arithmetic (which may be considered as representing what we should now call rhetoric and the belles lettres, physical science, and mathematics); and he adds, that while he wrote, there still remained some of the pupils of Theodore and Adrian, who spoke the Greek and Latin languages as readily as their native tongue.

Adrian, long surviving his friend the archbishop, is said to have lived for 39 years after he came to England, continuing till his death to preside over the monastery at Canterbury. He died in 709 and was buried in his monastery. He came to be regarded as a saint and his relics were re-deposited in the new monastery on 9 January 1091, which is now his feast day.

Grant us, O Lord, that amid the uncertainties of this world we may cling with all our heart to the things of heaven, for through the Abbot blessed Adrian you have given us a model of evangelical perfection.

May we be edified into living our lives according to the examples set by your saints. Through our Lord Jesus Christ, your Son, who lives and reigns with you in the unity of the Holy Spirit, one God, for ever and ever. Amen 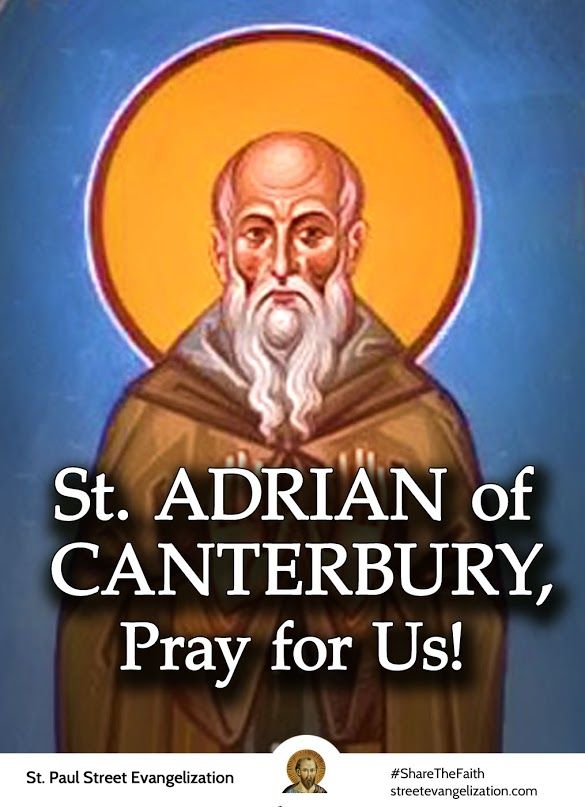 Saint Adrian of Canterbury, pray for us.