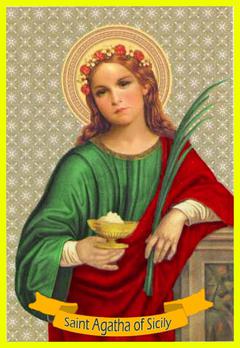 Agatha of Sicily ( 231 – 251 AD) is a Christian saint, whose memorial is on February 5. She was born in Catania, part of the Roman Province of Sicily, and was martyred in 251 AD. She is one of several virgin martyrs who are commemorated by name in the Canon of the Mass. She is one of the most highly venerated virgin martyrs of Christian antiquity, and was put to death during the Decian persecution (250–253) in Catania, Sicily, for her determined profession of faith.

15 year-old Agatha, from a rich and noble family, made a vow of virginity and rejected the amorous advances of the Roman prefect Quintianus, who thought he could force her to turn away from her vow and marry him. His persistent proposals were consistently spurned by Agatha. This was during the persecutions of Decius, so Quintianus, knowing she was a Christian, reported her to the authorities. Quintianus himself was governor of the district.

Quintianus expected Agatha to give in to his demands when faced with torture and possible death, but Agatha simply reaffirmed her belief in God by praying: “Jesus Christ, Lord of all, you see my heart, you know my desires. Possess all that I am. I am your sheep: make me worthy to overcome the devil.” To force her to change her mind, he sent Agatha to Aphrodisia, the keeper of a brothel, and had her imprisoned there, but to no avail. He finally had her imprisoned and tortured. She was stretched on a rack to be torn with iron hooks, burned with torches, whipped and underwent the excision of her breasts with pincers.

After further dramatic confrontations with Quintianus, which she faced with fortitude, Agatha was sentenced to be burnt at the stake. However, an earthquake prevented this from happening, and she was instead sent to prison, where St. Peter the Apostle appeared to her and healed her wounds. Agatha died in prison, probably in the year 251.

During the persecution of Roman Emperor Decius (AD 249–251), Agatha, together with some of her friends, had fled from Sicily and had taken refuge in Malta. She stayed in a rock-hewn crypt at Rabat, praying and teaching Christianity to children. After some time, Agatha returned to Sicily, where she faced martyrdom. She was arrested and brought before Quintianus, praetor of Catania, who condemned her to torture and imprisonment. At the time of St. Agatha’s stay, the crypt at Malta was a small natural cave, which, during the 4th or 5th century, was enlarged and embellished into an underground basilica.

The Festival of Saint Agatha in Catania is a major festival in the region, it takes place in the first five days of February. The Catania Cathedral (also known as Cattedrale di Sant’Agata) is dedicated to her. Saint Agatha is the patron saint of rape victims, breast cancer patients, wet nurses, and bellfounders (due to the shape of her severed breasts), and is considered to be a powerful intercessor when people suffer from fires. Her feast day is celebrated on February 5.

She is claimed as the patroness of Palermo. The year after her death, the stilling of an eruption of Mount Etna was attributed to her intercession. As a result, apparently, people continued to ask her prayers for protection against fire. In Switzerland, Agatha is considered the patron saint of fire services.

In the UK, Agatha is the patron saint of bell ringers in service of the Catholic Church and is also commemorated in literature.The Italian poet Martha Marchina wrote an epigram in Musa Posthuma that commemorates her martyrdom. She has characterized Saint Agatha as powerful, and Agatha reclaims that power, becoming more beautiful through her wounds.

Heavenly Father, you raised Agatha to the dignity of Sainthood, by virtue of her strength, dignity and fortitude in proclaiming and maintaining the faith, through severe torture and persecution.

We implore Your Divine Majesty, by her intercession, to grant us health of mind, body and soul. Free us from all which holds us bound to this earth, and let our spirit rise to your heavenly courts. We make this prayer in Jesus’ Name. Amen 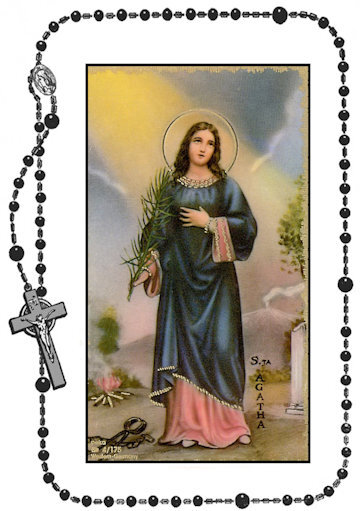 Saint Agatha, you resisted unwelcome advances from suitors, suffering pain and torture for your devotion to our Lord Jesus Christ. We celebrate your faith, dignity and martyrdom.

Protect us from violations of body and mind and guard us against all afflictions. Help us to overcome adversity and grant that we who venerate your sacrifice may receive your intercession in times of need. Amen