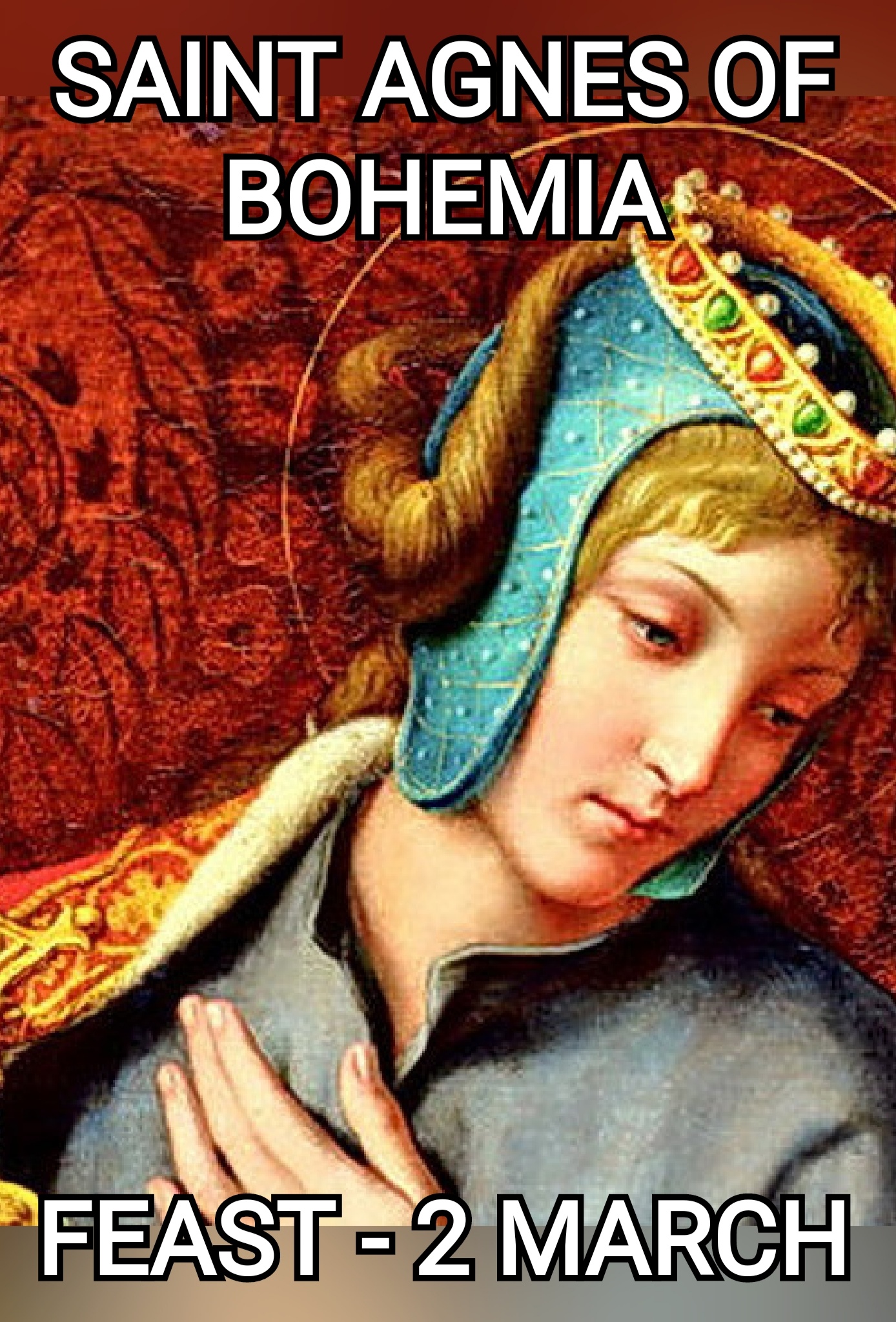 Agnes of Bohemia, O.S.C. (20 January 1211 – 2 March 1282), also known as Agnes of Prague, was a medieval Bohemian princess who opted for a life of charity, mortification of the flesh and piety over a life of luxury and comfort. Although she was venerated soon after her death, Agnes was not beatified or canonized for over 700 years.

Agnes was the daughter of King Ottokar I of Bohemia, making her a descendant of Saint Ludmila and Saint Wenceslaus, patron saints of Bohemia. Agnes’ mother was Constance of Hungary, who was the sister of King Andrew II of Hungary, so Agnes was a first cousin to St. Elizabeth of Hungary. When she was three years old, Agnes was entrusted to the care of St. Hedwig of Andechs, the wife of Duke Henry I, who placed her to be educated by a community of Cistercian nuns in a monastery which she herself had founded in Trzebnica.

Upon her return to Prague, she was entrusted to a priory run by Premonstratensian Canonesses to continue her education. At eight, Agnes was betrothed to Henry, son of Emperor Frederick II, Holy Roman Emperor. Henry was ten years old and had just been crowned King of Germany. According to custom, Agnes should have spent her childhood at her future husband’s court, in Germany at the palace of Archbishop Engelbert in Cologne.

Agnes was sent to the court of Duke Leopold VI of Babenberg. Leopold, however, wanted the young Henry to marry his daughter, Margaret. After being betrothed for six years, Henry and Agnes’s betrothal contract was cancelled. In 1226, Agnes’s father went to war against the Babenbergs, as a result of the cancelled betrothal. Ottokar then planned that Agnes marry Henry III of England, but it was vetoed by the Emperor who wanted to marry Agnes himself.

Agnes refused to play any more part in a politically arranged marriage. She decided to devote her life to prayer and spiritual works, for which she sought the help of Pope Gregory IX. Emperor Frederick is said to have remarked: “If she had left me for a mortal man, I would have taken vengeance with the sword, but I cannot take offence because in preference to me she has chosen the King of Heaven.” Inspired by the holy life of Francis and Clare of Assisi, who left their rich families and lived in smaller monasteries and shared the destiny with the poor, Agnes decided to become a bride of Christ.

In around 1232, supported by her brother and mother, Agnes founded the Hospital of St. Francis for poor and ill people and established the Hospital Brotherhood that later developed into the Order of the Knights of the Cross with the Red Star. A year later, two monasteries were founded near the Hospital: the male monastery for the Smaller Brothers of St. Francis and the female convent for the Clares. The three building complex created the first dominating Gothic landmark in Prague which could compete with the residential palace at Hradčany.

On land donated by her brother, Wenceslaus I, King of Bohemia, she founded the Hospital of St. Francis (circa 1232–33) and two friaries for the Franciscan friars, who had just come to Bohemia at her brother’s invitation. Through them, Agnes learned of Clare of Assisi and her Order of Poor Ladies, the monastic counterpart of the friars. She began a correspondence with Clare (which lasted for over two decades).

Agnes built a monastery and friary complex attached to the hospital. It housed the Franciscan friars and the Poor Clare nuns who worked at the hospital. This religious complex was one of the first Gothic buildings in Prague. This was the first Poor Clare community north of the Alps. In 1235, Agnes gave the property of the Teutonic Knights in Bohemia to the hospital.

She herself became a member of what became known as the Franciscan Poor Clares in 1234. Agnes joined the Clares, the female branch of the Franciscans, in 1234, along with another seven girls from wealthy Czech noble families. She became the abbess of the later St. Agnes Convent for a lengthy 47 years maintaining a great friendship through letters with St Clare of Assisi, some which still survive. She cooked for and mended the clothes of lepers and paupers, even after becoming abbess of the Prague Clares the following year. As can be seen in their correspondence, Clare wrote with deep maternal feelings toward Agnes, though they never met.

A lay group working at the hospital was organized by Agnes in 1238 as a new military order, dedicated primarily to nursing, known as the Knights of the Cross with the Red Star, following the Rule of St. Augustine. That next year, Agnes handed over all authority over the hospital she had founded to these monastic knights. They were recognized as an order by Pope Gregory IX in 1236–37. Agnes lived out her life in the cloister, leading the monastery as abbess, until her death on 2 March 1282.

The Monastery of the Holy Savior, renamed the Convent of Saint Agnes, (Czech: Klášter sv. Anežky) began to fall into decline after the Hussite Wars of the 15th century. The community was abolished in 1782. Restored in the 1960s, the building is now a branch of the National Gallery in Prague, featuring the medieval Central European and Bohemian collection.

In 1874, Pope Pius IX beatified Agnes. Pope John Paul II canonized Blessed Agnes on 12 November 1989. While she was known by her contemporaries because of her supposed visions and healing, such as her prophecy that King Wenceslaus would be victorious in his battle against the Austrians, her canonization was based on her practice of the Christian virtues of faith, hope and charity to an extraordinary degree and the continuing devotion of Christians to a saint’s example across centuries.

Though Agnes died in 1282, she is still venerated by Christians around the world more than 700 years later. She was honored in 2011, the 800th anniversary of her birth, as the Saint of the Overthrow of Communism, with a year dedicated to her by Catholics in the Czech Republic, of which she is patron.

Heavenly Father, you blessed Saint Agnes of Bohemia to devote her life completely to your service, though she was born into the privileged world of royalty. We pray for strength to heed your calling and pursue it faithfully.

Give us the desire to practice the virtues with which we struggle everyday and the determination to keep focusing on what we aspire to become with your help. In Jesus’ Name. Amen 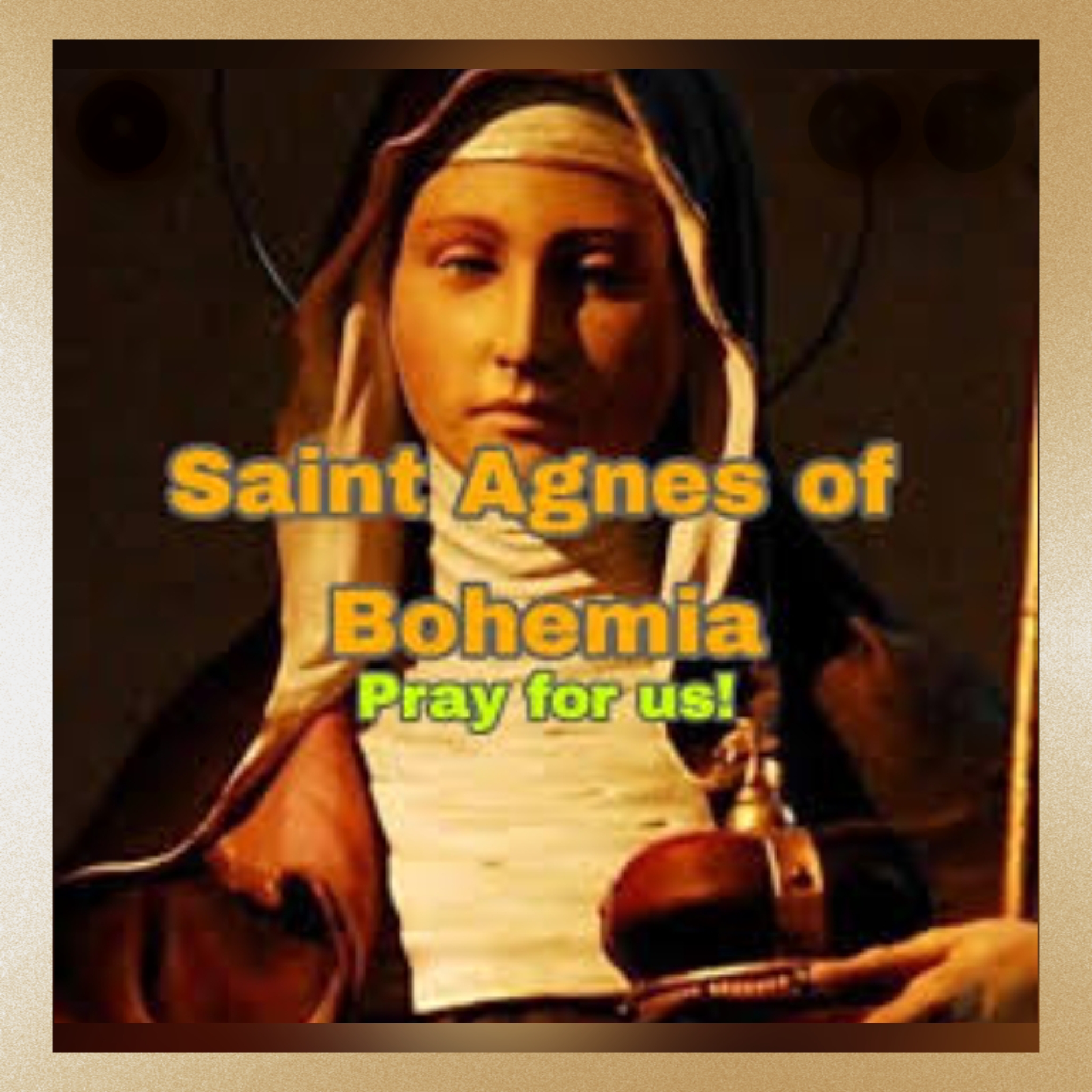 Saint Agnes of Bohemia, pray for us…