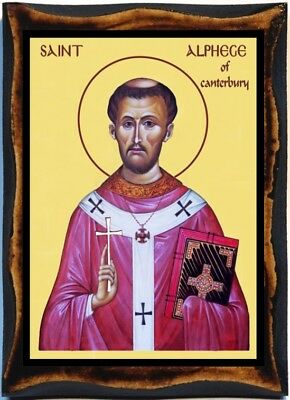 Aelfheah, also known as Alphege, was an Anglo-Saxon Bishop of Winchester, later Archbishop of Canterbury. He became an anchorite before being elected abbot of Bath Abbey. His reputation for piety and sanctity led to his promotion to the episcopate and, eventually, to his becoming archbishop and who was venerated as a martyr after his murder by the Danes.

Of noble birth, Aelfheah entered the Benedictine abbey of Deerhurst, Gloucestershire, and later became a hermit at Bath, Somerset, where followers elected him abbot. Aelfheah was a friend of Archbishop St. Dunstan of Canterbury, through whose influence he was named bishop of Winchester in 984. Aethelred II the Unready, king of the English, sent Aelfheah as ambassador to King Olaf I Tryggvason of Norway, who in 994 entered Britain and whom Aelfheah confirmed and allegedly persuaded not to invade England again. 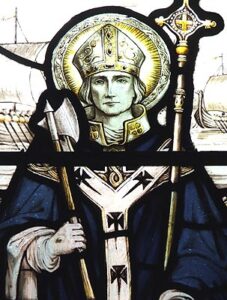 In 1005 he became the 29th Archbishop of Canterbury and immediately went to Rome to receive the pallium (symbol of metropolitan jurisdiction) from Pope John XVIII. Back in England, he called the Council of Enham (1009) in a futile effort to halt the social demoralization caused by the devastating Danish invasions. On Sept. 8, 1011, the Danes began their sack of Canterbury and seized Aelfheah.

He was ill-treated and held seven months without ransom, which he refused to pay with money that the poor would have had to supply as taxes. Aelfheah thereupon was slain by the Danes, after first being pelted with ox bones remaining from their feast. The ransom for his release was about three thousand pounds and went unpaid. Alphege refused to give the Danes that much, an act which infuriated them. He was hit with an ax and then beaten to death.

Revered as a martyr, Alphege’s remains were placed in St. Paul’s Church in London. The body, moved to Canterbury in 1023, was discovered to be incorrupt in 1105. Relics of St. Alphege are also in Bath, Glastonbury, Ramsey, Reading, Durham, Yorkminster and in Westminster Abbey. His emblem is an ax, and he is depicted in his pontifical vestments or as a shepherd defending his flock. 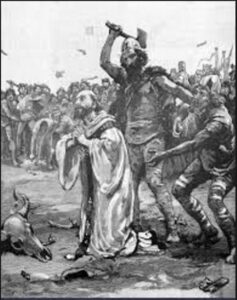 He was first buried at St. Paul’s Cathedral, London, by order of King Canute of Denmark, England, and Norway; his body was removed to Canterbury in 1023 amid great splendour. From the earliest years after his death he was venerated as a martyr. The parish church of Greenwich is dedicated to him.

Lord Jesus Christ, who didst willingly walk the way of the cross: Strengthen thy Church through the example and prayers of thy servant Alphege to hold fast the path of discipleship.

For with the Father and the Holy Spirit thou livest and reignest, one God, for ever and ever. Amen 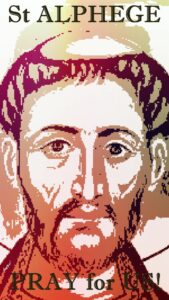 Saint Alphege, pray for us.