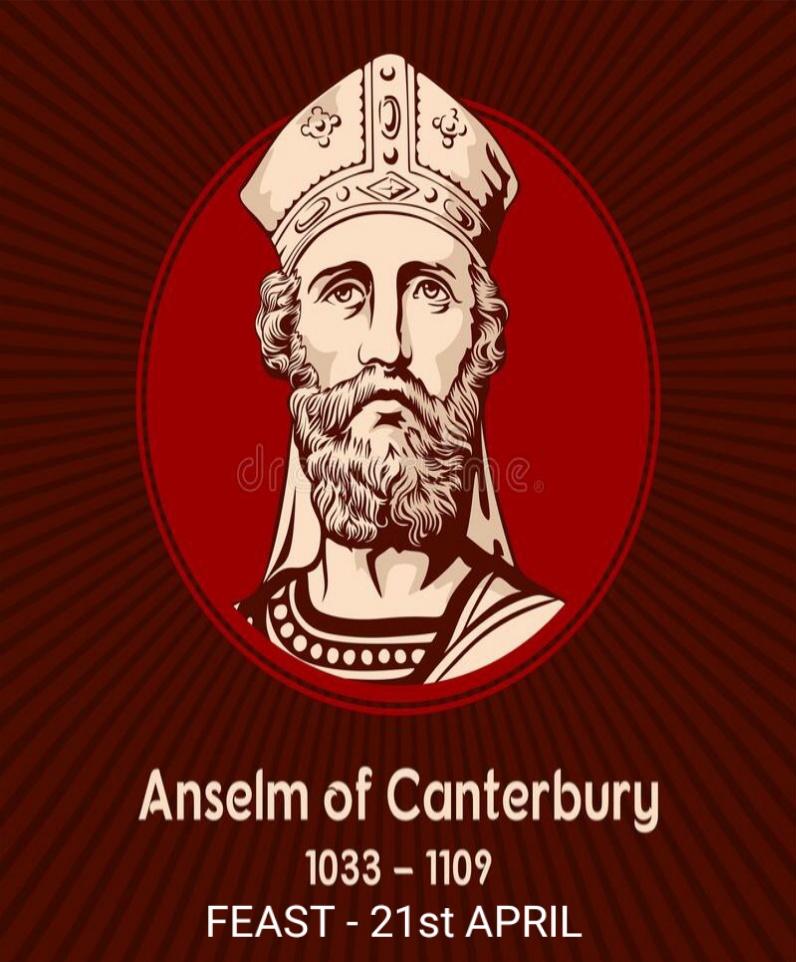 Anselm of Canterbury (1033 –1109), also called Anselm of Aosta, after his birthplace and Anselm of Bec (French: Anselme du Bec) after his monastery, was an Italian Benedictine monk, abbot, philosopher, and theologian of the Catholic Church, who held the office of Archbishop of Canterbury from 1093 to 1109. After his death, he was canonized as a saint. His feast day is celebrated on the 21st of April.

Anselm was born in or around Aosta in Upper Burgundy in 1033. At the age of fifteen, Anselm desired to enter a monastery, but failing to obtain his father’s consent, he was refused by the abbot. The illness he then suffered has been considered a psychosomatic effect of his disappointment, but upon his recovery he gave up his studies and for a time lived a carefree life.

Following the death of his mother, probably at the birth of his sister Richera, Anselm’s father repented his earlier lifestyle but professed his new faith with a severity that the boy found likewise unbearable. Once Gundulph had entered a convent, Anselm, at age 23, left home with a single attendant, crossed the Alps, and wandered through Burgundy and France for three years.

His countryman Lanfranc of Pavia was then prior of the Benedictine abbey of Bec in Normandy. Attracted by the fame of his fellow countryman, Anselm reached Normandy in 1059. After spending some time in Avranches, he returned the next year. His father having died, he consulted with Lanfranc as to whether to return to his estates and employ their income in providing alms or to renounce them, becoming a hermit or a monk at Bec or Cluny.

Professing to fear his own bias, Lanfranc sent him to Maurilius, the archbishop of Rouen, who convinced him to enter the abbey as a novice at the age of 27. Probably in his first year, he wrote his first work on philosophy, a treatment of Latin paradoxes called the Grammarian. Over the next decade, the Rule of Saint Benedict reshaped his thought.

As prior and abbot, Anselm made the Benedictine monastery of Bec the center of a true reformation in Normandy and England. From this monastery he exercised a restraining influence on popes, kings, the worldly great, and entire religious orders. Raised to the dignity of Archbishop of Canterbury and primate of England, he waged a heroic campaign in defense of the rights and liberties of the Church.

As a result he was deprived of goods and position and finally banned from the country. He journeyed to Rome, and at the Council of Bari supported Pope Urban II against the errors of the Greeks. His writings bear eloquent testimony to his moral stature and learning, and have earned for him the title of “Father of Scholasticism.”— The Church’s Year of Grace, Pius Parsch. 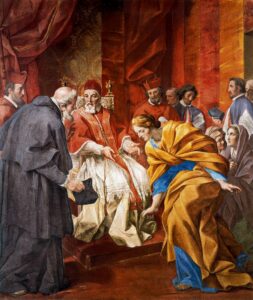 Saint Anselm exhibited remarkable versatility in his life; a combination of contemplation, prayer, study, writing, and external activity. This was partly the result of the extraordinary talent that God gave him, but it was likewise the fruit of Anselm’s faithful exercise of his talent in the study of natural and supernatural truths. But his chief merit lay in his earnest, conscious effort to live in accordance with what he had learned from the study of divine truths.

By this means he was able to ascend to the heights of a life of faith and union with God. There is very much that we can learn from this great teacher. He died on Holy Wednesday, 21 April 1109. His remains were translated to Canterbury Cathedral and laid at the head of Lanfranc at his initial resting place to the south of the Altar of the Holy Trinity (now St Thomas’s Chapel).

During the church’s reconstruction after the disastrous fire of the 1170s, his remains were relocated, although it is now uncertain where. On 23 December 1752, Archbishop Herring was contacted by Count Perron, the Sardinian ambassador, on behalf of King Charles Emmanuel, who requested permission to translate Anselm’s relics to Italy.

Herring ordered his dean to look into the matter, saying that while “the parting with the rotten Remains of a Rebel to his King, a Slave to the Popedom, and an Enemy to the married Clergy (all this Anselm was)” would be no great matter, he likewise “should make no Conscience of palming on the Simpletons any other old Bishop with the Name of Anselm”.

The ambassador insisted on witnessing the excavation, however, and resistance on the part of the prebendaries seems to have quieted the matter. They considered the state of the cathedral’s crypts would have offended the sensibilities of a Catholic and that it was probable that Anselm had been removed to near the altar of Sts. Peter and Paul, whose side chapel to the right (i.e., south) of the high altar took Anselm’s name following his canonization.

At that time, his relics would presumably have been placed in a shrine and its contents “disposed of” during the Reformation. The ambassador’s own investigation was of the opinion that Anselm’s body had been confused with Archbishop Theobald’s and likely remained entombed near the altar of the Virgin Mary, but in the uncertainty nothing further seems to have been done then or when inquiries were renewed in 1841.

Anselm’s hagiography records that, when a child, he had a miraculous vision of God on the summit of the Becca di Nona near his home, with God asking his name, his home, and his quest before sharing bread with him. Anselm then slept, awoke, returned to Aosta, and then retraced his steps before returning to speak to his mother.

Anselm’s canonization was requested of Pope Alexander III by Thomas Becket at the Council of Tours in 1163. He may have been formally canonized before Becket’s murder in 1170. No record of this has survived but he was subsequently listed among the saints at Canterbury and elsewhere. It is usually reckoned, however, that his cult was only formally sanctioned by Pope Alexander VI in 1494 or 1497 at the request of Archbishop Morton.

His feast day is commemorated on the day of his death, 21 April, by the Roman Catholic Church, much of Anglican Communion, and some forms of High Church Lutheranism. The location of his relics is uncertain. His most common attribute is a ship, representing the spiritual independence of the church. 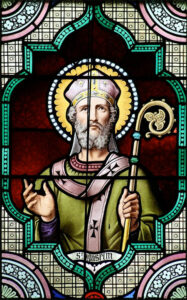 Anselm was proclaimed a Doctor of the Church by Pope Clement XI in 1720. He is known as the doctor magnificus (“Magnificent Doctor”) or the doctor Marianus (“Marian doctor”). A chapel of Canterbury Cathedral south of the high altar is dedicated to him; it includes a modern stained-glass representation of the saint, flanked by his mentor Lanfranc and his steward Baldwin and by kings William II and Henry I.

The Pontifical Atheneum of St. Anselm, named in his honor, was established in Rome by Pope Leo XIII in 1887. The adjacent Sant’Anselmo all’Aventino, the seat of the Abbot Primate of the Federation of Black Monks (all the monks under the Rule of St Benedict except the Cistercians and the Trappists), was dedicated to him in 1900. 800 years after his death, on 21 April 1909, Pope Pius X issued the encyclical “Communium Rerum” praising Anselm, his ecclesiastical career, and his writings.

In the United States, the Saint Anselm Abbey and its associated college are located in New Hampshire; they held a celebration in 2009 commemorating the 900th anniversary of Anselm’s death. In 2015, the Archbishop of Canterbury, Justin Welby, created the Community of Saint Anselm, an Anglican religious order that resides at Lambeth Palace and is devoted to “prayer and service to the poor”.

Anselm is remembered in the Church of England with a Lesser Festival on 21 April. His attributes are his mitre, pallium, and crozier, his books, a ship, representing the spiritual independence of the Church.

O God, who led the Bishop Saint Anselm to seek out and teach the depths of your wisdom, grant, we pray, that our faith in you may so aid our understanding, that what we believe by your command may give delight to our hearts. 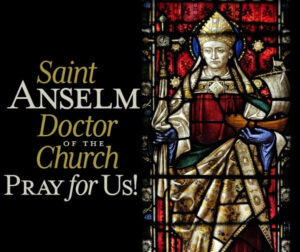 Saint Anselm of Canterbury, pray for us.