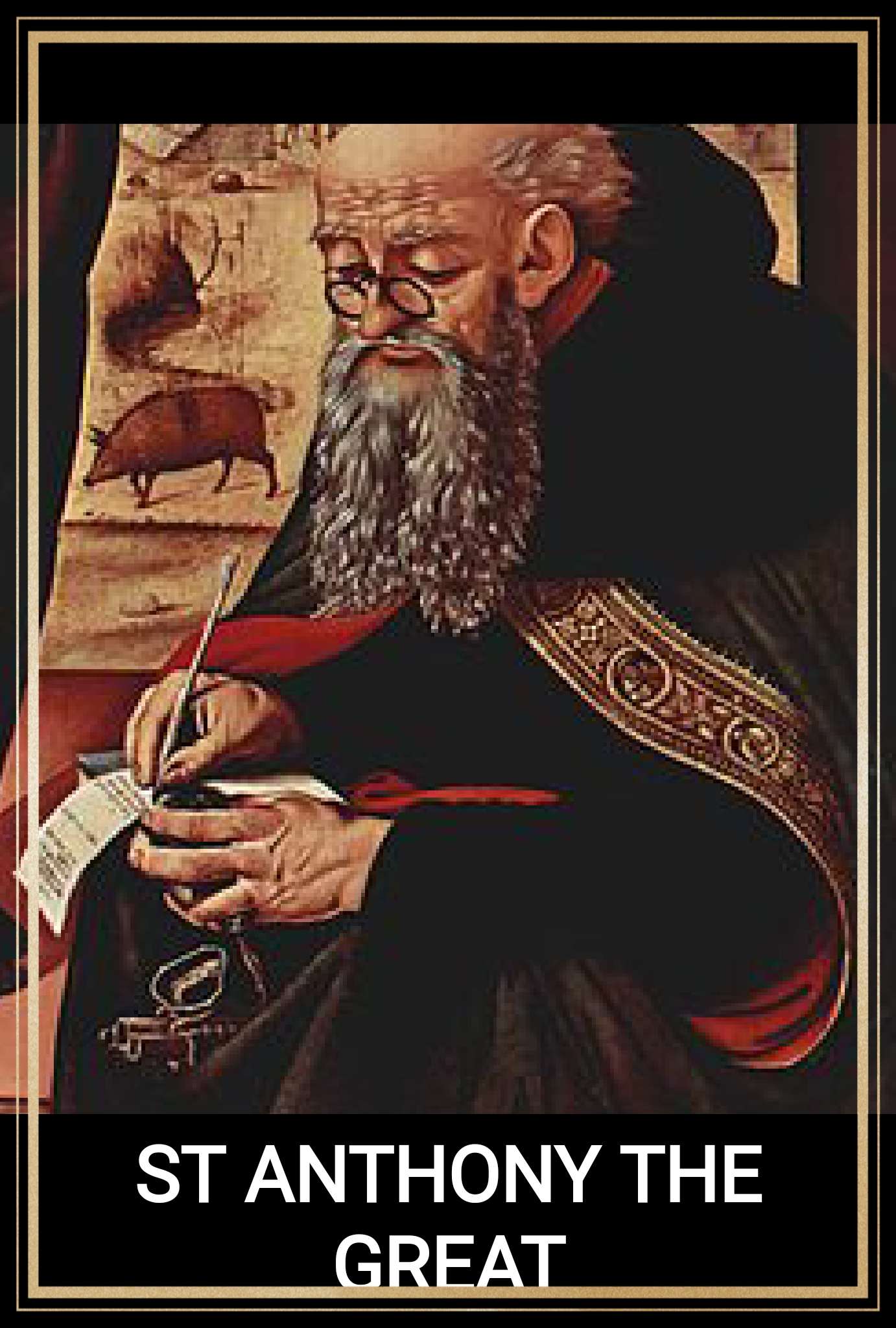 His importance among the Desert Fathers and all later Christian monasticism, gives him the title of the Father of All Monks. His feast day is celebrated on 17 January. Most of what is known about him comes from the writings titled, Life of Anthony.

This was written in Greek around 360 by Athanasius of Alexandria, and depicts Anthony as an illiterate, holy man, who through his existence in a primordial landscape has an absolute connection to the divine truth, which always is in harmony with that of Athanasius as the biographer. Sometime before 374 it was translated into Latin by Evagrius of Antioch.

The Latin translation helped the Life become one of the best known works of literature in the Christian world, a status it would hold through the Middle Ages. Many stories are also told about Anthony in various collections of sayings of the Desert Fathers, spread in a Greek translation. He himself dictated letters in the Coptic language.

Anthony was born in Coma in Lower Egypt to wealthy landowner parents. When he was about 20 years old, his parents died and left him with the care of his unmarried sister. Shortly thereafter, he decided to follow the gospel exhortation in Matthew 19: 21, “If you want to be perfect, go, sell what you have and give to the poor, and you will have treasures in heaven.” He gave away some of his family’s lands to his neighbors, sold his property, donating the funds to the poor. He left to live an ascetic life, placing his sister with a group of Christian virgins.

Anthony is sometimes considered the first monk, and the first to initiate solitary desertification, but there were others before him. There were already ascetic hermits (the Therapeutae), and cenobitic communities were described by the Jewish philosopher Philo of Alexandria in the 1st century AD as long established in other less accessible regions.

Anthony decided to surpass this tradition and headed out into the desert proper. He left for the alkaline Nitrian Desert (later the location of the noted monasteries of Nitria, Kellia, and Scetis) on the edge of the Western Desert about 95 km (59 mi) west of Alexandria. He remained there for 13 years.

Anthony maintained a very strict ascetic diet. He ate only bread, salt and water and never meat or wine. He ate at most only once a day and sometimes fasted through two or four days. According to Athanasius, the devil fought Anthony by afflicting him with boredom, laziness, and the phantoms of women, which he overcame by the power of prayer, providing a theme for Christian art.

After that, he moved to one of the tombs near his native village. There it was that the Life records those strange conflicts with demons in the shape of wild beasts, who inflicted blows upon him, and sometimes left him nearly dead.

After fifteen years of this life, at the age of thirty-five, Anthony determined to withdraw from the habitations of men and retire in absolute solitude by the Nile called Pispir (now Der-el-Memun), opposite Arsinoë. There he lived strictly enclosed in an old abandoned Roman fort for some 20 years.

Food was thrown to him over the wall. Gradually, a number of would-be disciples established themselves in caves and in huts around the mountain. A colony of ascetics was formed, who begged Anthony to be their guide in the spiritual life. Eventually, he yielded, and, about the year 305, emerged from his retreat. To the surprise of all, he appeared healthy in mind and body.

For five or six years he devoted himself to the instruction and organization of the great body of monks that had grown up around him; but then he once again withdrew into the inner desert that lay between the Nile and the Red Sea, near the shore of which he fixed his abode on a mountain where still stands the monastery that bears his name, Der Mar Antonios.

There he spent the last forty-five years of his life, in a seclusion, not so strict as Pispir, for he freely saw those who came to visit him, and he used to cross the desert to Pispir with considerable frequency. Amid the Diocletian Persecutions, around 311 Anthony went to Alexandria and was conspicuous visiting those who were imprisoned.

Most of Anthony’s life was spent in solitude. He saw the world completely covered with snares, and gave the Church and the world the witness of solitary asceticism, great personal mortification and prayer. But no saint is antisocial, and Anthony drew many people to himself for spiritual healing and guidance. At 54, he responded to many requests and founded a sort of monastery of scattered cells. Again, like Francis, he had great fear of “stately buildings and well-laden tables.”

At 60, he hoped to be a martyr in the renewed Roman persecution of 311, fearlessly exposing himself to danger while giving moral and material support to those in prison. At 88, he was fighting the Arian heresy, that massive trauma denying the divinity of Christ, from which it took the Church centuries to recover. Anthony is associated in art with a T-shaped cross, a pig and a book.

The pig and the cross are symbols of his valiant warfare with the devil—the cross his constant means of power over evil spirits, the pig a symbol of the devil himself. He died in solitude at age 105. His is patron of animals, skin diseases, farmers, butchers, basket makers, brushmakers, gravediggers, Pontifical Ecclesiastical Academy, Rome.

Heavenly Father, in an age that looks in disbelief at the notion of devils and angels, Saint Anthony the Great was known for having power over evil spirits. He devoted his entire life to solitude and prayer leading an essentially Christian life.

Help us Lord, to likewise dedicate our lives to Christ. Saint Anthony’s hermit life reminds us of the absoluteness of our break with sin and the totality of our commitment to Christ. May we make that commitment a way of life, through Jesus Christ our Lord. Amen 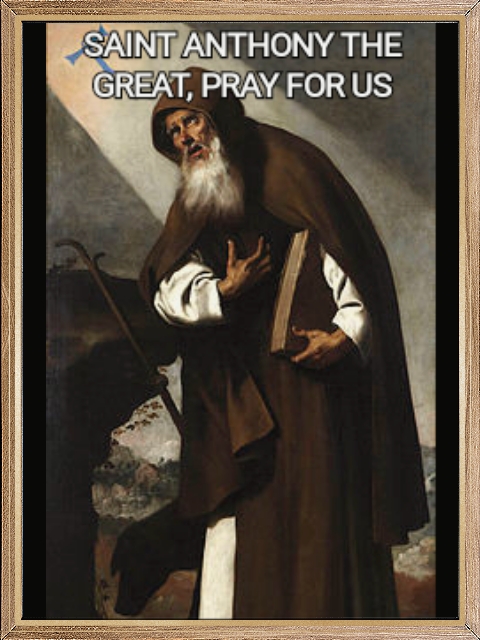 Saint Anthony, you have inspired all with the fervor and sincerity of your devotion. Lead us to follow Christ all the days of our lives. Amen