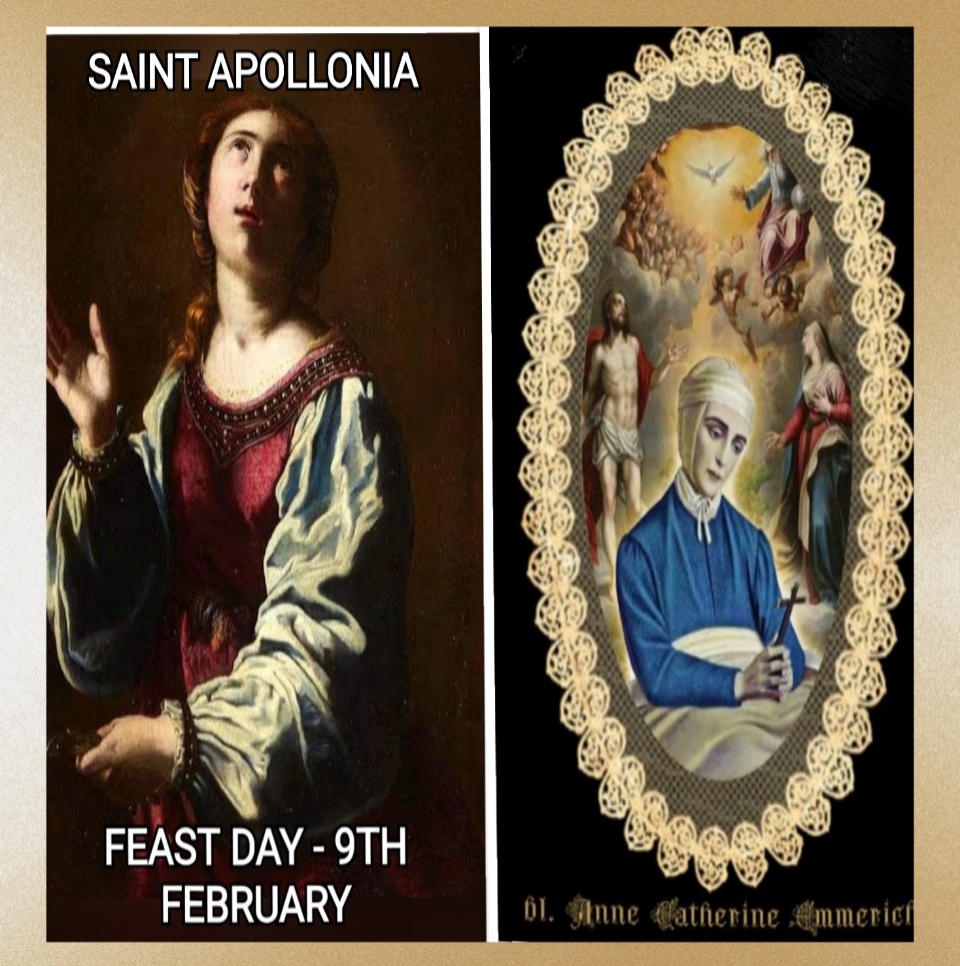 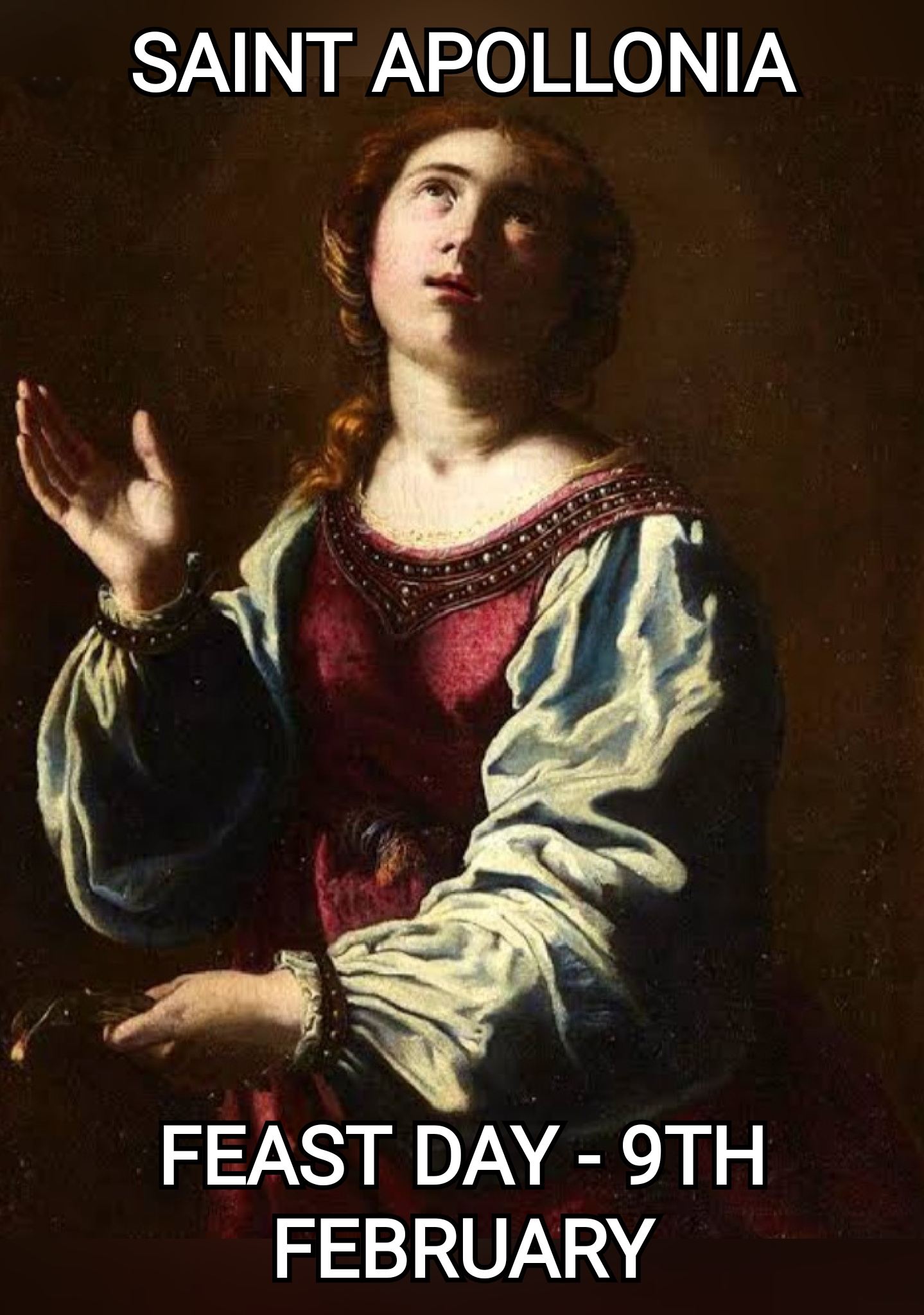 While most of the Christians were fleeing the city following the persecution of Christians which began in Alexandria during the reign of the Emperor Philip, leaving all their worldly possessions, an old deaconess, Apollonia, was seized. About c. 248, the fury of the Alexandrian mob rose to a great height, and when one of their poets prophesied a calamity, they committed bloody outrages on the Christians, whom the authorities made no effort to protect.

Dionysius, Bishop of Alexandria (247–265), relates the sufferings of his people in a letter addressed to Fabius, Bishop of Antioch, of which long extracts have been preserved in Eusebius’ Historia Ecclesiae. After describing how a Christian man and woman, Metras and Quinta, were seized and killed by the mob, and how the houses of several other Christians were pillaged, Dionysius narrates that at that time, Apollonia, a deaconess, was held in high esteem.

The men seized her and by repeated blows broke all her teeth. They then erected outside the city gates a pile of wood and threatened to burn her alive if she refused to repeat after them impious words. Given, at her own request, a little freedom, she sprang quickly into the fire and was burned to death. Apollonia and a whole group of early martyrs did not await the death they were threatened with, but either to preserve their chastity or because they were confronted with the alternative of renouncing their faith or suffering death, voluntarily embraced the death prepared for them as a person who would commit suicide.

Augustine of Hippo touches on this question in the first book of The City of God, that during the time of persecution certain holy women plunged into the water with the intention of being swept away by the waves and drowned, and thus preserve their threatened chastity. Although they quitted life in this wise, nevertheless they receive high honour as martyrs in the Catholic Church, with feasts observed with great ceremony.

He commented that this was a matter on which he dare not pass judgment lightly. For he knew not but that the Church was divinely authorized through trustworthy revelations to honour thus the memory of these Christians. May it not be, too, that these acted in such a manner, not through human caprice but on the command of God, not wrongly but through obedience, as we must believe in the case of Samson. When, however, God gives a command and makes it clearly known, no-one would account obedience to crime or condemn such pious devotion and ready service.

While part of her relics were preserved in the former church of St. Apollonia at Rome, her head lay at the Basilica di Santa Maria in Trastevere, her arms at the Basilica di San Lorenzo fuori le Mura, parts of her jaw in St. Basil’s, and other relics in the Jesuit church at Antwerp, in St. Augustine’s at Brussels, in the Jesuit church at Mechlin, in St. Cross at Liège, in the treasury of the cathedral of Porto, and in several churches at Cologne. These relics consist in some cases of a solitary tooth or a splinter of bone. In the Middle Ages, objects claimed to be her teeth were sold as toothache cures.

There was a church dedicated to her in Rome, near the Basilica di Santa Maria in Trastevere, but it no longer exists. Only its little square, the Piazza Sant’Apollonia remains. One of the principal train stations of Lisbon is also named for this saint. The island of Mauritius was originally named Santa Apolónia in her honor in 1507 by Portuguese navigators. In some areas of Italy, Saint Apollonia is cast in the role of the tooth fairy, collecting children’s fallen baby teeth while they sleep and leaving a gift in exchange.

The Madonna Della Strada Chapel at Loyola University Chicago contains a stained glass window on the north wall depicting St. Apollonia. The windows along this wall correspond with the colleges of the university at the time the chapel was built. The Loyola University School of Dentistry closed in 1993, but the window in the chapel remains. She is the patroness of dentists, and people suffering from toothache and other dental diseases.

She is pictured with a pair of pincers holding a tooth or with a golden tooth suspended from her necklace. Saint Augustine explained her voluntary martyrdom as a special inspiration of the Holy Spirit, since no one is allowed to cause his or her own death. The Roman Catholic and Eastern Orthodox Churches celebrate the feast day of St. Apollonia on February 9, and she is popularly invoked against toothache, because of the torments she had to endure.

She is represented in art with pincers in which a tooth is held. Saint Apollonia is one of the two patron saints of Catania. She might also be the patron of the aging, for she attained glory in her old age, standing firm before her persecutors even as her fellow Christians fled the city. However we choose to honor her, she remains a model of courage for us.

0 My God, bring me safe through temptation and strengthen me as you did strengthen Apollonia.

May we display the same courage in giving up our life when faced with tyranny and persecution because of our faith, if you so will it, through Christ our Lord. Amen 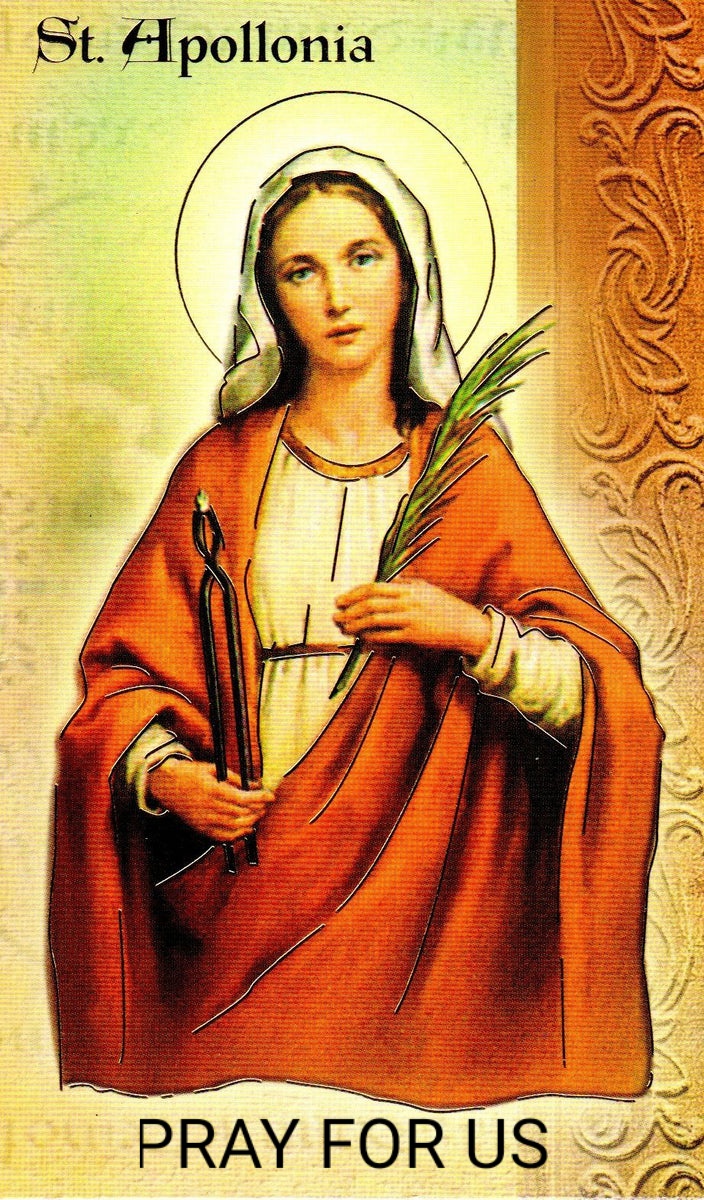 Glorious Apollonia, patron saint of dentistry and refuge to all those suffering from diseases of the teeth, I consecrate myself to you, beseeching you to number me among your clients. Assist me by your intercession with God in my daily work and intercede with Him to obtain for me a happy death.

Pray that my heart like yours, may be inflamed with the love of Jesus and Mary, through Christ our Lord. Amen 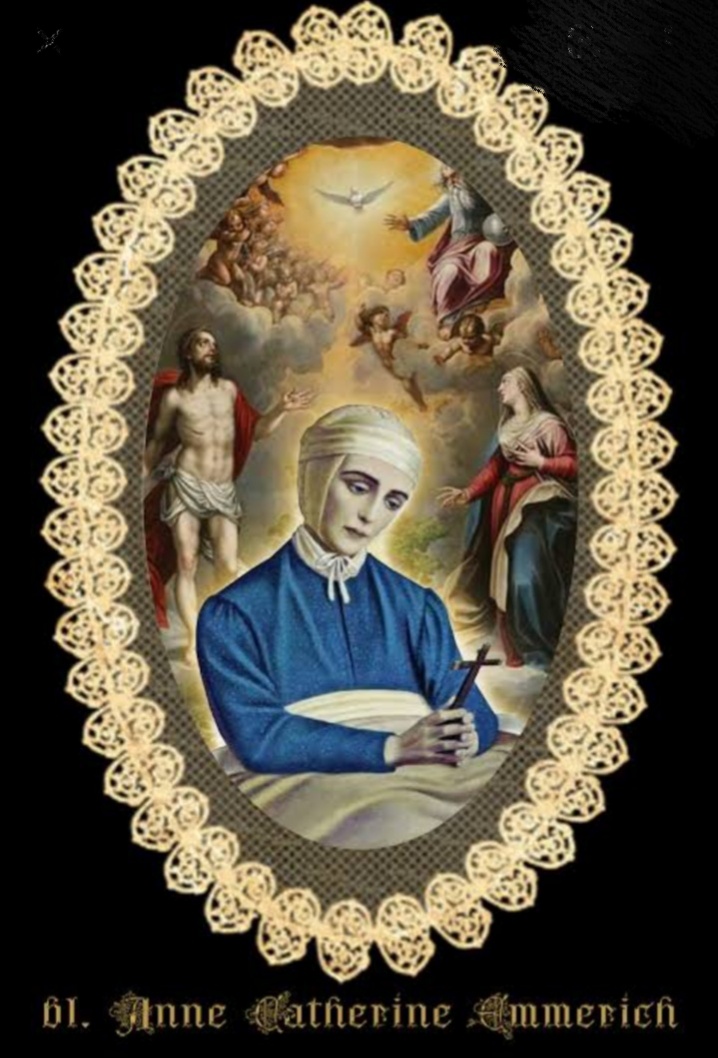 Anne Catherine Emmerich, 8 September 1774 – 9 February 1824, was a Roman Catholic Augustinian Canoness Regular of Windesheim, mystic, Marian visionary, ecstatic and stigmatist. She was born into a family of poor farmers and had nine brothers and sisters. From an early age, she helped with the house and farm work. Her schooling was rather brief, but all those who knew her noticed that she felt drawn to prayer from an early age. At twelve, she started to work at a large farm in the vicinity and learned and also worked as a seamstress.

She applied for admission to various convents, but was rejected because she could not afford a dowry. Eventually, the Poor Clares in Münster agreed to accept her, provided she would learn to play the organ. She went to the organist Söntgen in Coesfeld to study music, but the poverty of the Söntgen family prompted her to work there and to sacrifice her small savings in an effort to help them. Later, one of the Söntgen daughters entered the convent with her.

In 1802, at the age of 28, Emmerich and her friend Klara Söntgen finally managed to join the Augustinian nuns at the convent of Agnetenberg in Dülmen. The following year, Emmerich took her religious vows. In the convent, she became known for her strict observance of the order’s rule, but, from the beginning to 1811, she was often quite ill and had to endure great pain. At times, her zeal and strict adherence to rules disturbed some of the more tepid sisters, who were puzzled by her weak health and religious ecstasies.

When Jérôme Bonaparte, King of Westphalia, suppressed the convent in 1812, she found refuge in a widow’s house. In early 1813, marks of the stigmata were reported on Emmerich’s body. The parish priest called in two doctors to examine her. When word of the phenomenon spread three months later, he notified the vicar general. With the news causing considerable talk in the town, the ecclesiastical authorities conducted a long investigation.

There was divided opinion on the stigmata, many labeling her as an imposter. Emmerich began grew weaker during the summer of 1823. She died on 9 February 1824 in Dülmen and was buried in the graveyard outside the town. Her grave was reopened twice in the weeks following the funeral, due to a rumor that her body had been stolen, but the coffin and the body were found to be intact. In February 1975, her remains were moved to the Holy Cross Church in Dülmen, where they rest today. She was beatified by Pope John Paul II, on 3 October, 2004.

Oh great holy follower of Our Lord Jesus Christ, Blessed Anne Catherine Emmerich, who was endowed with extraordinary gifts from God including seeing the Past, Present and Future History of the Catholic Church, reading the troubled hearts of souls, prophesying future events of the Catholic Church and enduring great suffering including the Holy Stigmata, so that many souls could be drawn toward the Holy Presence of God and enter into Heaven for all eternity, we sinners beseech you to listen to our prayer requests today (make your prayer request). We know that Almighty God hears your voice.

Blessed Anne Catherine Emmerich, intercede with God today for this prayer petition in the Name of Our Precious Lord Jesus Christ and through the intercession of His Blessed Mother Mary. Amen 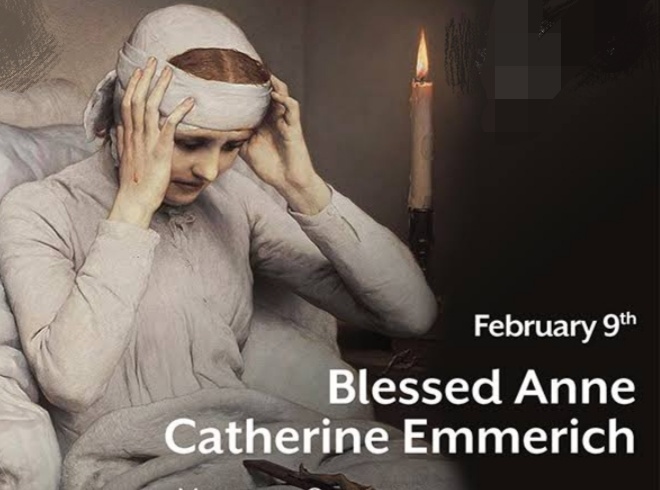