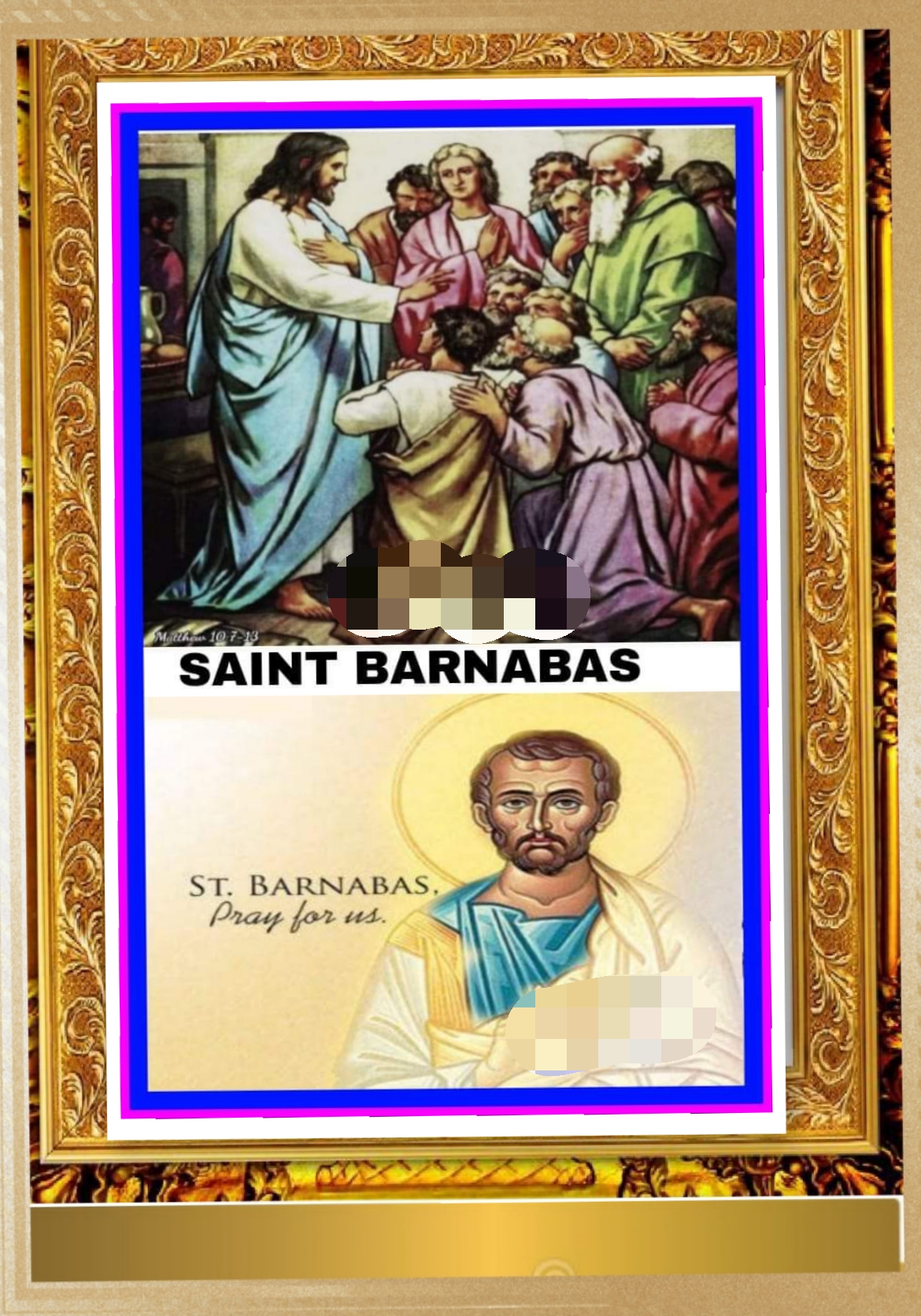 Barnabas was according to tradition an early Christian, one of the prominent Christian disciples in Jerusalem. According to Acts 4:36, Barnabas was a Cypriot Jew. Named an apostle in Acts 14:14, he and Paul the Apostle undertook missionary journeys together and defended Gentile converts against the Judaizers.

Although the date, place, and circumstances of his death are not historically verifiable, Christian tradition holds that Barnabas was martyred at Salamis, Cyprus, stoned to death around the year 61. He is traditionally identified as the founder of the Cypriot Orthodox Church. The feast day of Barnabas is celebrated on June 11.

Barnabas is usually identified as the cousin of Mark the Evangelist on the basis of the term “anepsios” used in Colossians 4, which carries the connotation of “cousin.” Orthodox tradition holds that Aristobulus of Britannia, one of the Seventy Disciples, was the brother of Barnabas.

His Hellenic Jewish parents called him Joseph, but when recounting the story of how he sold his land and gave the money to the apostles in Jerusalem, the Book of Acts says the apostles called him Barnabas, meaning “son of encouragement” or “son of consolation”. Barnabas appears mainly in Acts, a history of the early Christian church. He also appears in several of Paul’s epistles.

Barnabas, a native of Cyprus and a Levite, is first mentioned in the Acts of the Apostles as a member of the early Christian community in Jerusalem, who sold the land that he owned and gave the proceeds to the community. When the future Paul the Apostle returned to Jerusalem after his conversion, Barnabas introduced him to the apostles. Easton, in his Bible Dictionary, supposes that they had been fellow students in the school of Gamaliel.

The successful preaching of Christianity at Antioch to non-Jews led the church at Jerusalem to send Barnabas there to oversee the movement. He found the work so extensive and weighty that he went to Tarsus in search of Paul (still referred to as Saul), “an admirable colleague”, to assist him. Paul returned with him to Antioch and labored with him for a whole year.

At the end of this period, the two were sent up to Jerusalem (44 AD) with contributions from the church at Antioch for the relief of the poorer Christians in Judea. They returned to Antioch taking John Mark with them, the cousin or nephew of Barnabas. Later, they went to Cyprus and some of the principal cities of Pamphylia, Pisidia, and Lycaonia. 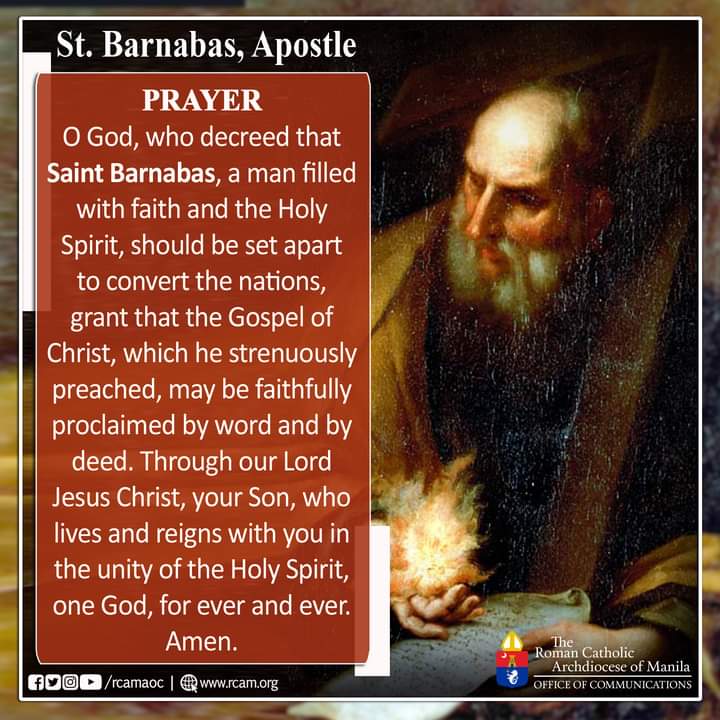 They traveled together making more converts (c. 46–48), and participated in the Council of Jerusalem (c. 49). Barnabas and Paul successfully evangelized among the “God-fearing” Gentiles who attended synagogues in various Hellenized cities of Anatolia.

After recounting what the governor of Cyprus Sergius Paulus believed, Acts 13:9 speaks of Barnabas’s spiritual brother no longer as Saul, but as Paul, his Roman name, and generally refers to the two no longer as “Barnabas and Saul” as heretofore, but as “Paul and Barnabas”. Only in Acts 14:14 and Acts 15:12–25 does Barnabas again occupy the first place, in the first passage with recollection of Acts 14:12, in the last 2, because Barnabas stood in closer relation to the Jerusalem church than Paul.

Paul appears as the more eloquent missionary, whence the Lystrans regarded him as Hermes and Barnabas as Zeus. Acts 14:14 is also the unique biblical topic where Saint Barnabas is called with the Greek word for Apostle. Returning from this first missionary journey to Antioch, they were again sent up to Jerusalem to consult with the church there regarding the relation of Gentiles to the church.

According to Galatians 2:9–10, Barnabas was included with Paul in the agreement made between them, on the one hand, and James, Peter, and John, on the other, that the two former should in the future preach to the pagans, not forgetting the poor at Jerusalem. This matter having been settled, they returned again to Antioch, bringing the agreement of the council that Gentiles were to be admitted into the church without having to adopt Jewish practices. 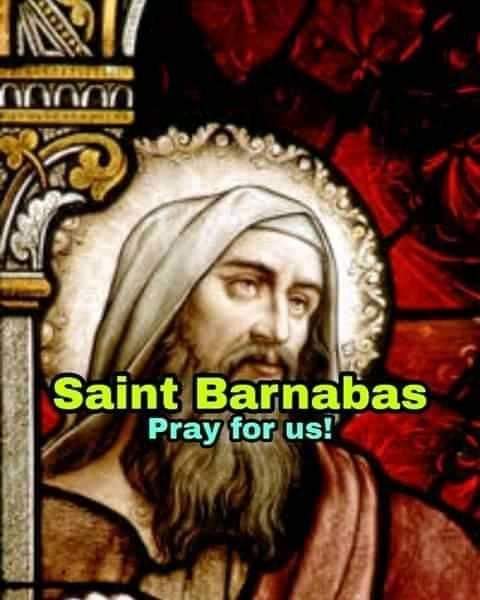 After they had returned to Antioch from the Jerusalem council, they spent some time there. Peter came and associated freely there with the Gentiles, eating with them, until criticized for this by some disciples of James, as against Mosaic law. Upon their remonstrances, Peter yielded apparently through fear of displeasing them, and refused to eat any longer with the Gentiles.

Barnabas followed his example. Paul considered that they “walked not uprightly according to the truth of the gospel” and upbraided them before the whole church. In Galatians 2:11–13, Paul says, “And when Kephas came to Antioch, I opposed him to his face because he clearly was wrong. For, until some people came from James, he used to eat with the Gentiles; but when they came, he began to draw back and separated himself, because he was afraid of the circumcised.

And the rest of the Jews (also) acted hypocritically along with him, with the result that even Barnabas was carried away by their hypocrisy.” Paul then asked Barnabas to accompany him on another journey. Barnabas wished to take John Mark along, but Paul did not, as he had left them on the earlier journey. The dispute ended by Paul and Barnabas taking separate routes.

Paul took Silas as his companion, and journeyed through Syria and Cilicia; while Barnabas took John Mark to visit Cyprus. Little is known of the subsequent career of Barnabas. He was still living and labouring as an Apostle in 56 or 57, when Paul wrote 1 Corinthians (9:5–6), in which it is stated that he, too, like Paul, earned his own living.

The reference indicates also that the friendship between the two was unimpaired. When Paul was a prisoner in Rome (61–63), John Mark was attached to him as a disciple, which is regarded as an indication that Barnabas was no longer living (Colossians 4:10).[16]

Church tradition developed outside of the canon of the New Testament describes the martyrdom of many saints, including the legend of the martyrdom of Barnabas. It relates that certain Jews coming to Syria and Salamis, where Barnabas was then preaching the gospel, being highly exasperated at his extraordinary success, fell upon him as he was disputing in the synagogue, dragged him out, and, after the most inhumane tortures, stoned him to death. 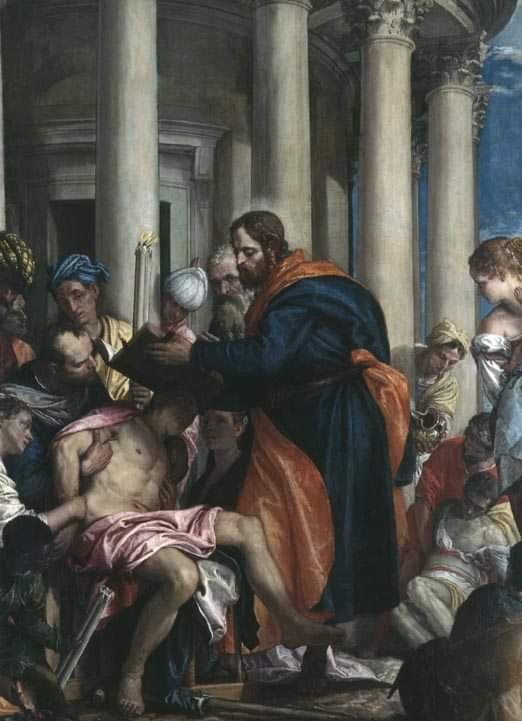 His kinsman, John Mark, who was a spectator of this barbarous action, privately interred his body. Although it is believed he was martyred by being stoned, the apocryphal Acts of Barnabas states that he was bound with a rope by the neck, and then being dragged only to the site where he would be burned to death.

According to the History of the Cyprus Church, in 478 Barnabas appeared in a dream to the Archbishop Anthemios of Cyprus and revealed to him the place of his sepulchre beneath a carob-tree. The following day Anthemios found the tomb and inside it the remains of Barnabas with a manuscript of Matthew’s Gospel on his breast. Anthemios presented the Gospel to Emperor Zeno at Constantinople.

He received from him the privileges of the Greek Orthodox Church of Cyprus, that is, the purple cloak which the Greek Archbishop of Cyprus wears at festivals of the church, the imperial sceptre and the red ink with which he affixes his signature. Anthemios then placed the venerable remains of Barnabas in a church which he founded near the tomb. Excavations near the site of a present-day church and monastery, have revealed an early church with two empty tombs, believed to be that of St. Barnabas and Anthemios.

St. Barnabas is venerated as the Patron Saint of Cyprus. He is also considered a patron saint in many other places in the world, highlighting Milan in Italy. On the island of Tenerife (Spain), St. Barnabas was invoked in historical times as patron saint and protector of the island’s fields against drought, together with St. Benedict of Nursia. Barnabas the Apostle is remembered in the Church of England with a festival on 11 June.

Dear Lord, we thank You for giving us St. Barnabas as an example of holiness. Help us to imitate the love of You that led him to join the Apostles and become a Christian.

St. Barnabas, you were eager to join the Apostles in their Christian Faith, as they began the work of preaching the Gospel throughout the world after Christ’s Ascension into Heaven. You willingly gave up worldly pursuits in order to serve God.

Please bring my petitions before God Whom you served. Amen 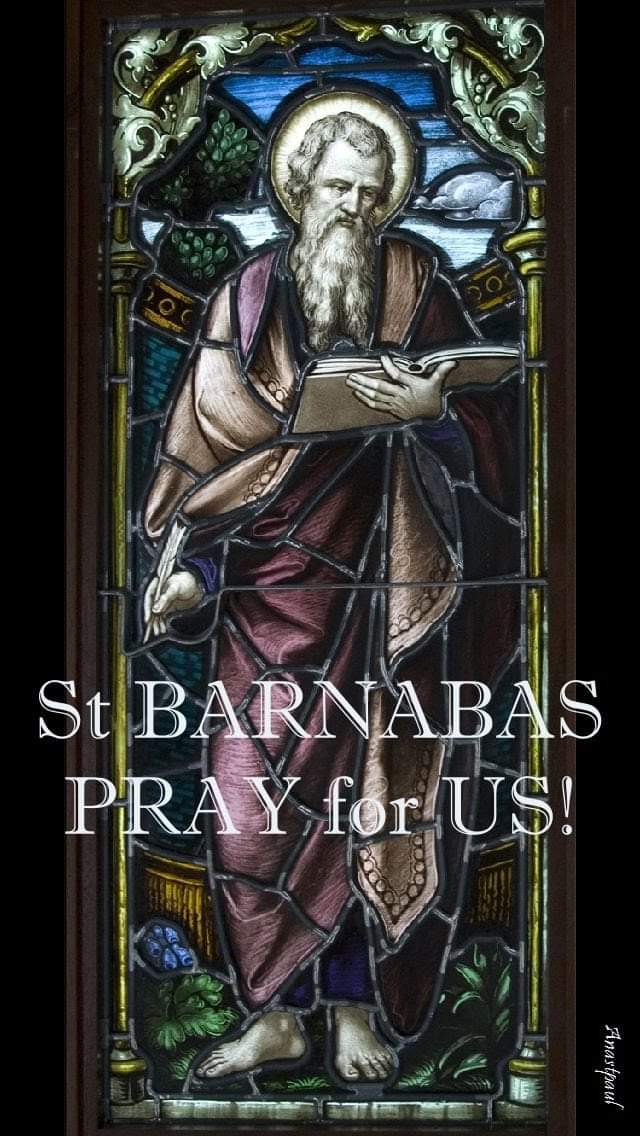