FEAST OF SAINT BERNADINE OF SIENE – 20th MAY 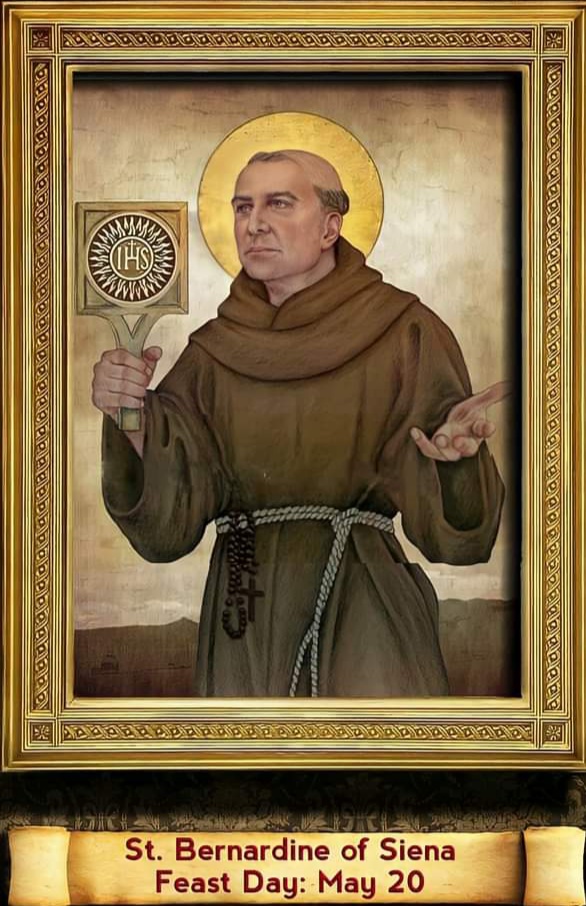 FEAST OF SAINT BERNADINE OF SIENE
FEAST DAY – 20th MAY

Bernardino of Siena ( 8 September 1380 – 20 May 1444) was an Italian priest, Franciscan missionary and systematizer of Scholastic economics. His popular preaching made him famous during his own lifetime because it was frequently directed against sorcery, gambling, infanticide, witchcraft, homosexuality, Jews, and usury. Bernardino was later canonised by the Catholic Church as a saint – he is also referred to as “the Apostle of Italy” – for his efforts to revive the country’s Catholic faith.

Bernardino was born in 1380 to the noble Albizzeschi family in Massa Marittima (Tuscany), a Sienese town of which his father was then governor. Left orphaned at six, he was raised by a pious aunt. In 1397, after a course of civil and canon law, he joined the Confraternity of Our Lady attached to the hospital of Santa Maria della Scala church.

Three years later, when the plague visited Siena, he ministered to the plague-stricken, and, assisted by ten companions, took upon himself for four months entire charge of this hospital. He escaped the plague but was so exhausted that a fever confined him for several months. In 1403 he joined the Observant branch of the Order of Friars Minor (the Franciscan Order), with a strict observance of St. Francis’ Rule.

Bernardino was ordained a priest in 1404 and was commissioned as a preacher the next year. About 1406 St. Vincent Ferrer, a Dominican friar and missionary, while preaching at Alessandria in the Piedmont region of Italy, allegedly foretold that his mantle should descend upon one who was then listening to him, and said that he would return to France and Spain, leaving to Bernardino the task of evangelizing the remaining peoples of Italy.

Before Bernardino, most preachers either read a prepared speech or recited a rhetorical oration. Instead of remaining cloistered and preaching only during the liturgy, Bernardino preached directly to the public. For more than 30 years, he preached all over Italy and played a great part in the religious revival of the early fifteenth century.

Although he had a weak and hoarse voice, he is said to have been one of the greatest preachers of his time. His style was simple, familiar, and abounding in imagery. Cynthia Polecritti, in her biography of Bernardino, notes that the texts of his sermons “are acknowledged masterpieces of colloquial Italian.” He was an elegant and captivating preacher, and his use of popular imagery and creative language drew large crowds to hear his reflections.

Invitations were often extended by the civil authorities rather than the ecclesiastical, as sometimes the towns would make money from the crowds that came to hear him. Unlike many of his contemporaries, Bernardino chose his themes not from the daily liturgy, but from the ordinary lives of the people of Siena. He selected biblical themes to focus on the interests of his audience.

Women comprised the majority of listeners, and the size of the crowd varied according to the day, time, and topic of the sermon. Polecritti notes, the subject matter of his sermons reveals much about the contemporary context of 15th-century Italy. He travelled from place to place, remaining nowhere more than a few weeks. These journeys were all made on foot.

In the towns, the crowds assembled to hear him were at times so great that it became necessary to erect a pulpit on the market-place. Like Vincent Ferrer, he usually preached at dawn. His hearers, so as to ensure themselves standing room, would arrive beforehand, many coming from far-distant villages. The sermons lasted three or four hours.

He was invited to Ferrara in 1424, where he preached against the excess of luxury and immodest apparel. In Bologna, he spoke out against gambling, much to the dissatisfaction of card manufacturers and sellers. Returning to Siena in April 1425, he preached there for 50 consecutive days. His success was claimed to be remarkable. “Bonfires of the Vanities” were held at his sermons.

People threw mirrors, high-heeled shoes, perfumes, locks of false hair, cards, dice, chessmen, and other frivolities to be burned. Bernardino enjoined his listeners to abstain from blasphemy, indecent conversation, and games of hazard, and to observe feast days. Bernardino was not universally popular. In L’Aquila someone once sawed the legs of the pulpit causing him to fall into the crowd.

In 1427, he was called to Siena to allay factional strife. However, Bernardino preferred preaching rather than being an arbitrator. When he spoke against factions and vendettas, he was uncharacteristically tactful. To Policretti, this suggests that the situation could have become violent at the least provocation.

Both while he was alive and after his death (the first edition of his works, for the most part elaborate sermons, was printed at Lyon in 1501), Bernardino’s legacy was far from tame: of a strict, moral temper, he preached fiery sermons against many classes of people and these were riddled with denunciations.

He characterized some women as “witches”, and called for sodomites to be ostracized or otherwise removed from the human community. He thus was a champion of what historian Robert Moore called “the persecuting society” of late medieval Christian Europe.

Bernardino presented the Virgin Mary as an example for women. He advised girls never to talk to a man unless one of their parents was present. In one sermon Bernardino cautioned women about marrying men who care more for their dowries than for them. On one occasion he asked mothers to come to church with their daughters alone so that he speak to them frankly about sexual abuse in marriage.

He also spoke against the confinement of unwilling girls to convents. He presented Saint Joseph as an example for men, while emphasizing Mary’s obedience to her husband. In Siena he preached a full sermon against sodomy (including homosexuality) in 1425 and then 1427; linking it directly with fears about the depopulation as it did not lead to children and was therefore unproductive.

He said, “You don’t understand that [sodomy] is the reason you have lost half your population over the last twenty-five years”. His teachings helped mould public sentiment and dispel indifference over controlling sodomy and homosexual conduct vigorously. Everything unpredictable he attributed to sodomy, including floods, the plague, as well as linking the practice to local population decline. Irate sodomites attempted to beat him with clubs. 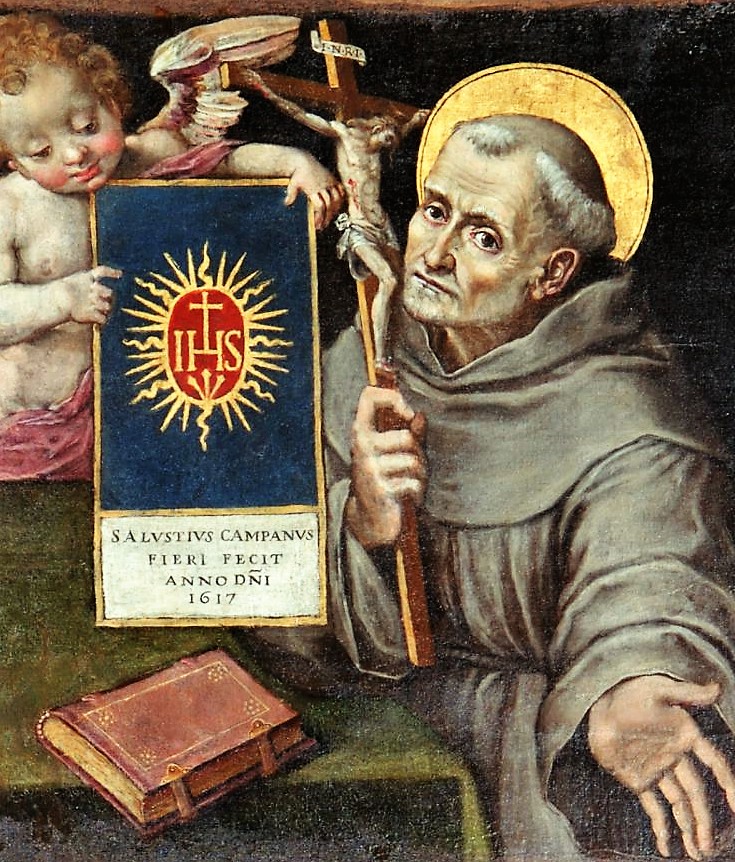 Especially known for his devotion to the Holy Name of Jesus, previously associated with John of Vercelli and the Dominican order, Bernardino devised a symbol—IHS—the first three letters of the name of Jesus in Greek, in Gothic letters on a blazing sun. This was to displace the insignia of factions. The devotion spread, and the symbol began to appear in churches, homes and public buildings. Opponents thought it a dangerous innovation.

In 1426 Bernardino was summoned to Rome to stand trial on charges of heresy for his promotion of this devotion to the Holy Name of Jesus. Theologians gave their opinions. Bernardino was found innocent of heresy, and he impressed Pope Martin V sufficiently that Martin requested he preach in Rome. He thereupon preached every day for 80 days. Bernardino’s zeal was such that he would prepare up to four drafts of a sermon before starting to speak.

John Capistran (Giovanni da Capistrano) was his friend, and James of the Marches (Giacomo della Marca) was his disciple during these years. Cardinals urged both Pope Martin V and Pope Eugene IV to condemn Bernardino, but both almost instantly acquitted him. A trial at the Council of Basel also ended with an acquittal.

Holy Roman Emperor Sigismund sought Bernardino’s counsel and intercession and Bernardino accompanied him to Rome in 1433 for his coronation. Being Vicar General inevitably cut back his opportunities to preach, but he continued to speak to the public when he could. Having in 1442 persuaded the pope to finally accept his resignation as vicar-general so that he might give himself undividedly to preaching, he resumed his missionary work.

Despite a Papal Bull issued by Pope Eugene IV in 1443 which charged Bernardino to preach the indulgence for the Crusade against the Turks, there is no record of his having done so. In 1444, notwithstanding his increasing infirmities, Bernardino, desirous that there should be no part of Italy which had not heard his voice, set out to the Kingdom of Naples.

He died that year at L’Aquila in the Abruzzi and is buried in the Basilica of San Bernardino. According to tradition, his grave continued to leak blood until two factions of the city achieved reconciliation. Reports of miracles attributed to Bernardino multiplied rapidly after his death, and Bernardino was canonized as a saint in 1450, only six years after his death, by Pope Nicholas V.

Plead their case, with Mary our Mother, that they be healed in accordance with God’s Will, offering their afflictions for the salvation of souls.

We seek your intercession in Jesus’ Name. Amen 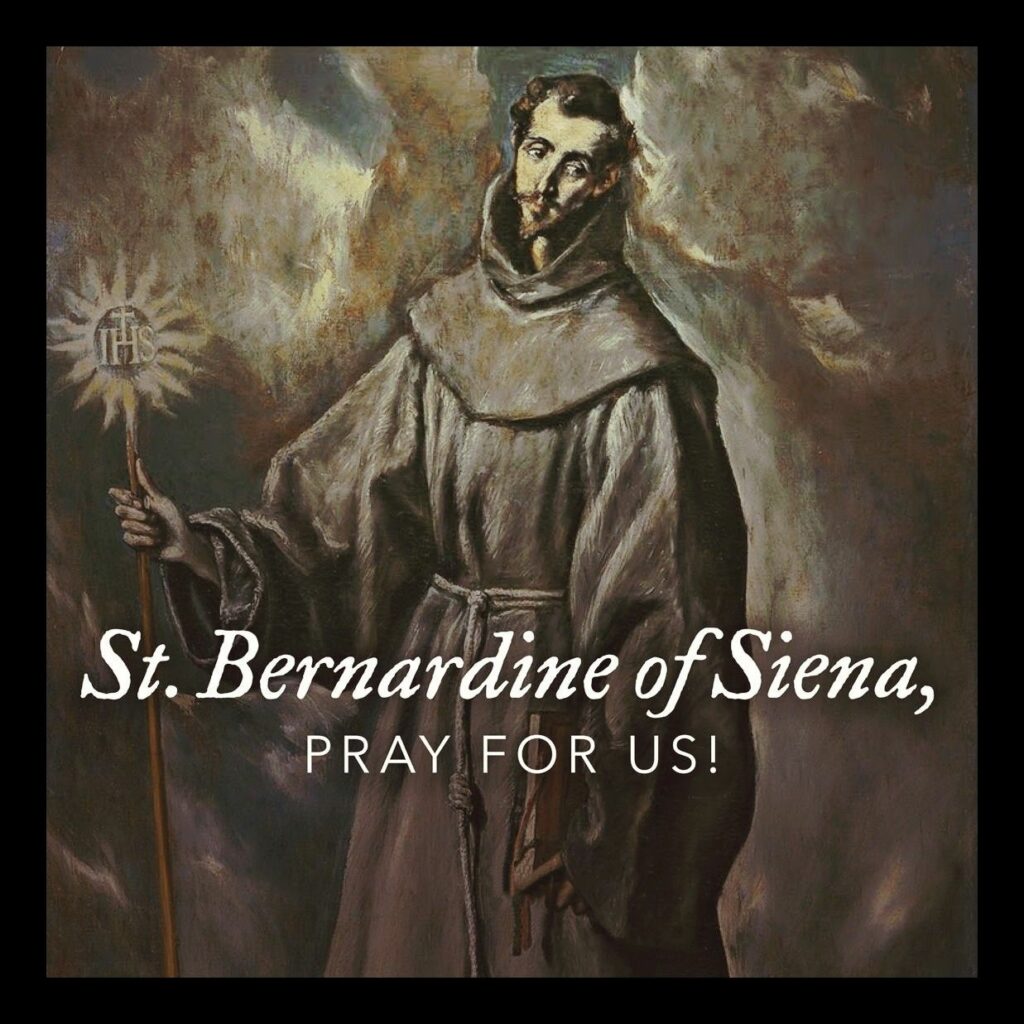