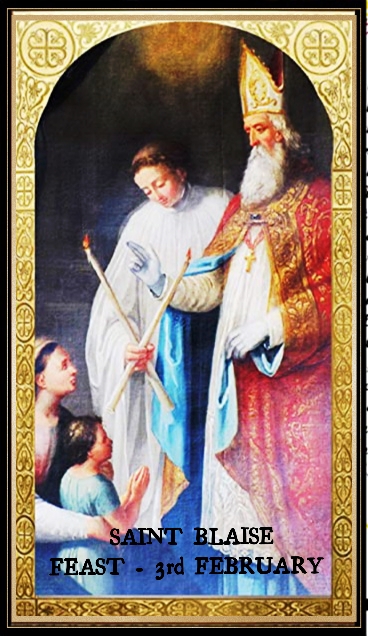 Saint Blaise, was a physician in Armenia, who was made a bishop, and he is attributed with many miracles. One of these related the miraculous removal of a fish bone from a young boy’s throat, which is why he is considered protector from throat diseases. From being a healer of bodily ailments, Saint Blaise became a physician of souls, then retired for a time to a cavern where he remained in prayer.

As bishop of Sebastea, Blaise instructed his people as much by his example as by his words, and the great virtues and sanctity of the servant of God were attested by many miracles. From all parts, the people came flocking to him for the cure of bodily and spiritual ills. Blaise, who had studied philosophy in his youth, exercised his art with miraculous ability, good-will, and piety.

When the bishop of the city died, he was chosen to succeed him, with the acclamation of all the people. His holiness was manifest through many miracles: from all around, people came to him to find cures for their spirit and their body; even wild animals came in herds to receive his blessing. In 316, Agricola, the governor of Cappadocia and of Lesser Armenia, having arrived in Sebastia at the order of the emperor Licinius to kill the Christians, arrested the bishop.

As the governor’s hunters led Blaise back to Sebaste, on the way, the story goes, they met a poor woman whose pig had been seized by a wolf. At the command of Blaise, the wolf restored the pig to its owner, alive and unhurt. When he had reached the capital and was in prison awaiting execution, the old woman whose pig he had saved came to see him, bringing two fine wax candles to dispel the gloom of his dark cell. In the West there was no group honoring St. Blaise prior to the eighth century.

The governor, unable to make Blaise renounce his faith, beat him with a stick, ripped his flesh with iron combs, and beheaded him. According to the Acts, while Blaise was being taken into custody, a distraught mother, whose only child was choking on a fishbone, threw herself at his feet and implored his intercession. Touched at her grief, he offered up his prayers, and the child was cured immediately. Consequently, Saint Blaise is invoked for protection against injuries and illnesses of the throat. Saint Blaise was beheaded in 316.

In many places, on the day of his feast the blessing of St. Blaise is given. Two candles (sometimes lit), blessed on the feast of the Presentation of the Lord (Candlemas), are held in a crossed position by a priest over the heads of the faithful or the people are touched on the throat with them. At the same time the following blessing is given: “Through the intercession of Saint Blaise, bishop and martyr, may God deliver you from every disease of the throat and from every other illness”. Then the priest makes the sign of the cross over the faithful.

O Glorious Saint Blaise, your martyrdom has made you a precious witness to the faith. Obtain for us the grace to defend, both by word and example, the truth of our faith, which is so brutally attacked and slandered in our times.

You miraculously cured a little child when at the point of death by reason of an affliction of the throat. Grant us your powerful protection in our misfortunes and, above all, obtain for us the grace of repentance. Help us to avoid temptation and repeatedly offending God. Amen 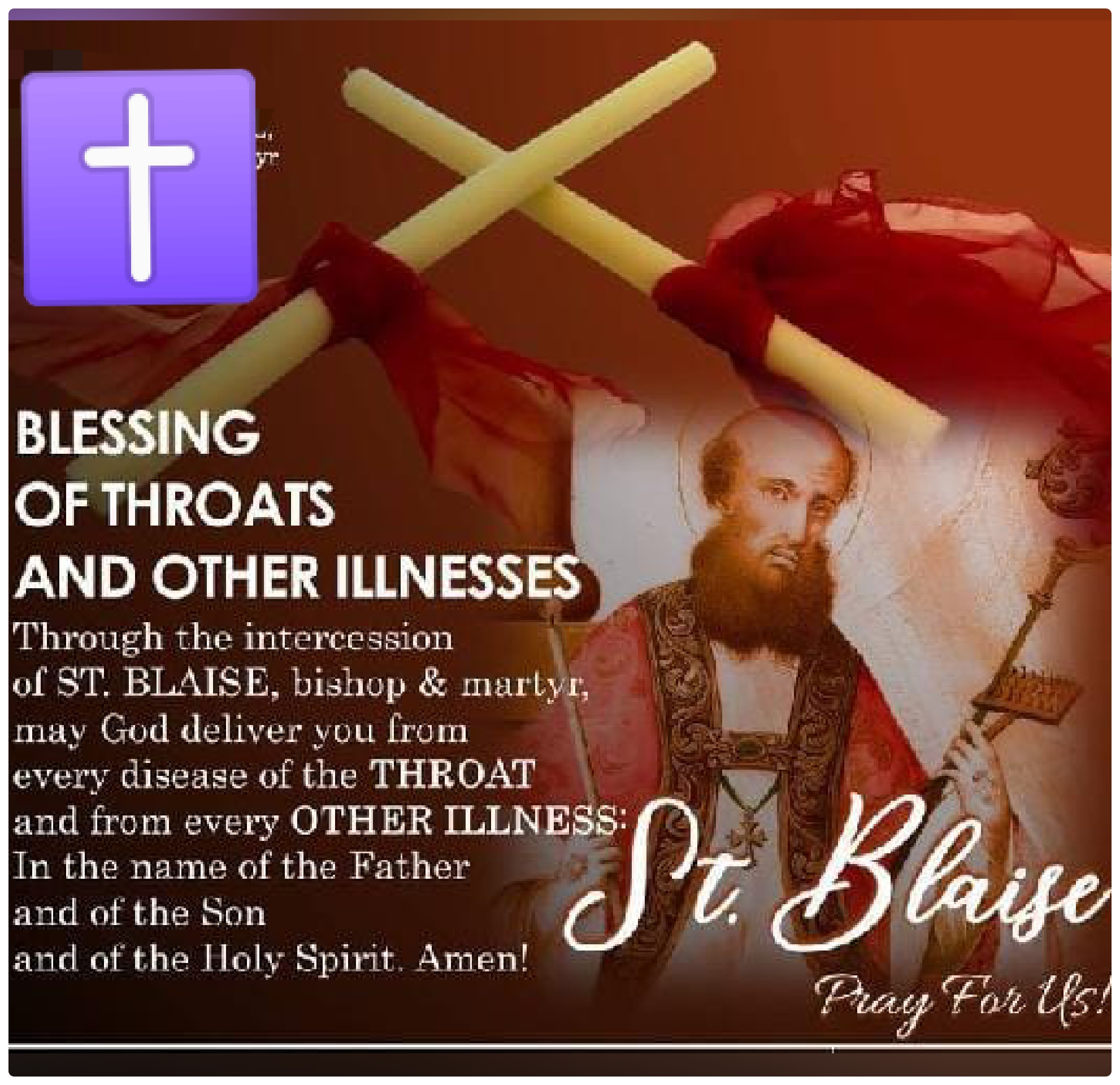 Through the intercession of St Blaise, bishop and martyr, may God deliver you from ailments of the throat and from every other evil.

† In the Name of the Father, and of the Son and of the Holy Spirit. Amen†