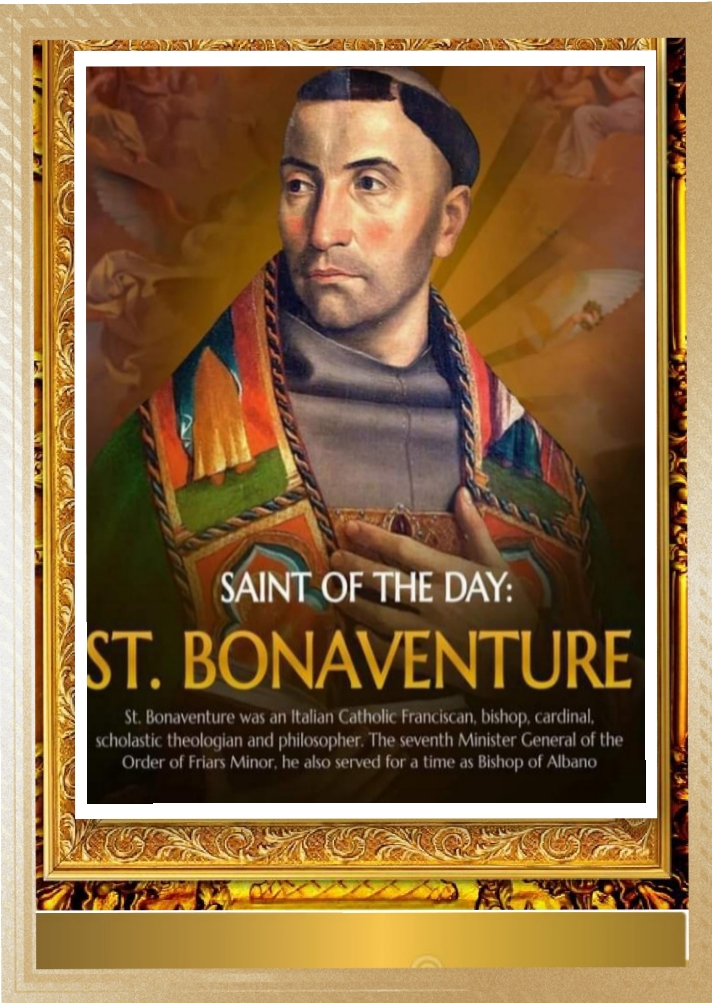 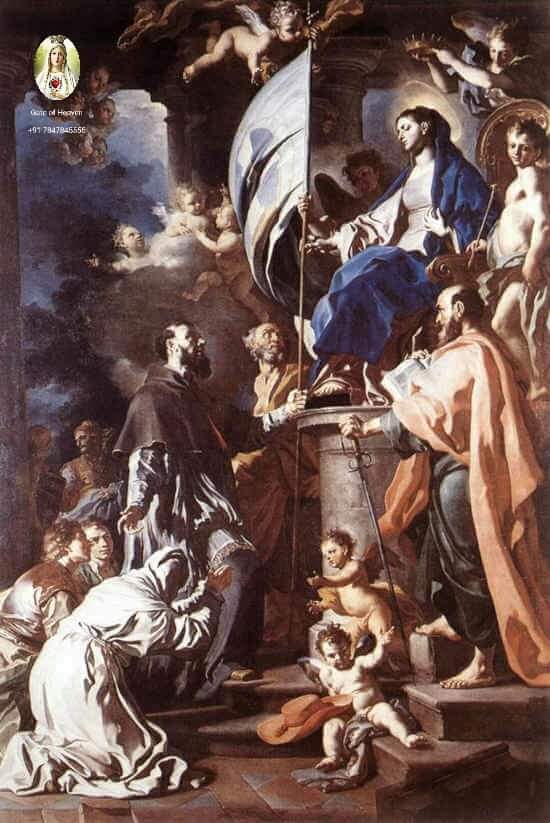 Saint Bonaventure, born Giovanni di Fidanza, was an Italian Catholic Franciscan, bishop, cardinal, scholastic theologian and philosopher. He was the seventh Minister General of the Order of Friars Minor, and he also served for a time as Bishop of Albano. He was canonised on 14 April 1482 by Pope Sixtus IV and declared a Doctor of the Church in 1588 by Pope Sixtus V.

He is known as the “Seraphic Doctor” (Latin: Doctor Seraphicus). His feast day is 15 July. Many writings believed in the Middle Ages to be his are now collected under the name Pseudo-Bonaventure.

He was born at Civita di Bagnoregio, not far from Viterbo, then part of the Papal States. Bonaventure reports that in his youth he was saved from an untimely death by the prayers of Francis of Assisi, which is the primary motivation for Bonaventure’s writing the vita.

Perhaps not a household name for most people, Saint Bonaventure, nevertheless, played an important role in both the medieval Church and the history of the Franciscan Order. A senior faculty member at the University of Paris, Saint Bonaventure certainly captured the hearts of his students through his academic skills and insights.

But more importantly, he captured their hearts through his Franciscan love for Jesus and the Church. Like his model, Saint Francis, Jesus was the center of everything—his teaching, his administration, his writing, and his life. 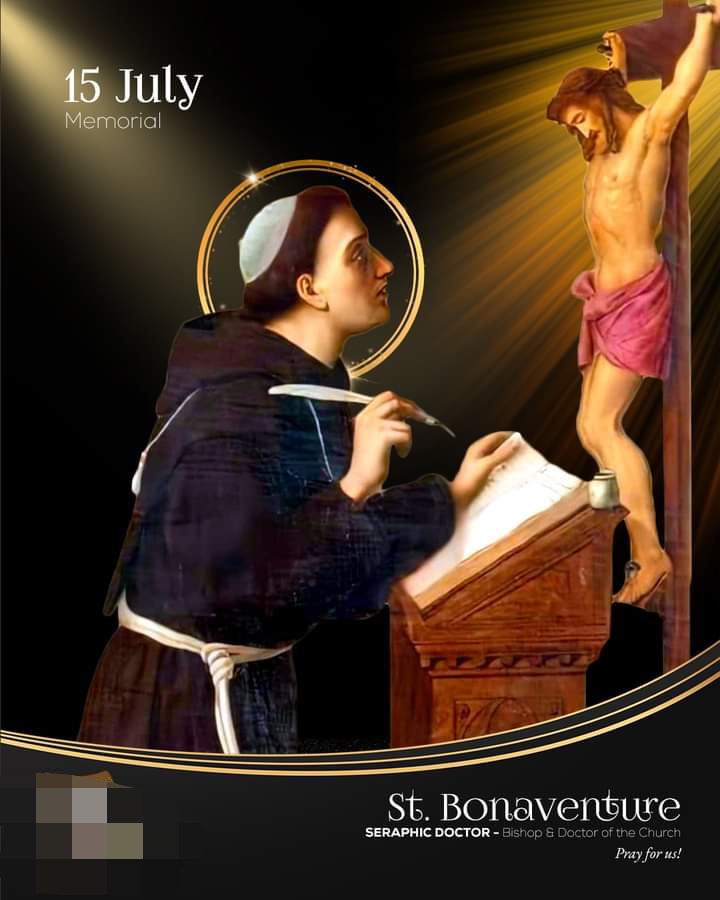 Born in Bagnoregio in 1221, Saint Bonaventure was baptized John, but received the name Bonaventure when he became a Franciscan at the age of 22. Little is known about his childhood, but we do know that his parents were Giovanni di Fidanza and Maria Ritell. It seems that his father was a physician and a man of means.

Saint Francis of Assisi died about five years after Bonaventure’s birth. Saint Bonaventure’s teaching career came to a halt when the Friars elected him to serve as their General Minister. His 17 years of service were not easy as the Order was embroiled in conflicts over the interpretation of poverty.

He entered the Franciscan Order in 1243 and studied at the University of Paris, possibly under Alexander of Hales, and certainly under Alexander’s successor, John of Rochelle. In 1253 he held the Franciscan chair at Paris. A dispute between seculars and mendicants delayed his reception as Master until 1257, where his degree was taken in company with Thomas Aquinas.

Three years earlier his fame had earned him the position of lecturer on The Four Books of Sentences—a book of theology written by Peter Lombard in the twelfth century—and in 1255 he received the degree of master, the medieval equivalent of doctor.

Some friars even ended up in heresy saying that Saint Francis and his community were inaugurating the era of the Holy Spirit which was to replace Jesus, the Church, and Scripture. But because he was a man of prayer and a good administrator, Saint Bonaventure managed to structure the Order through effective legislation. 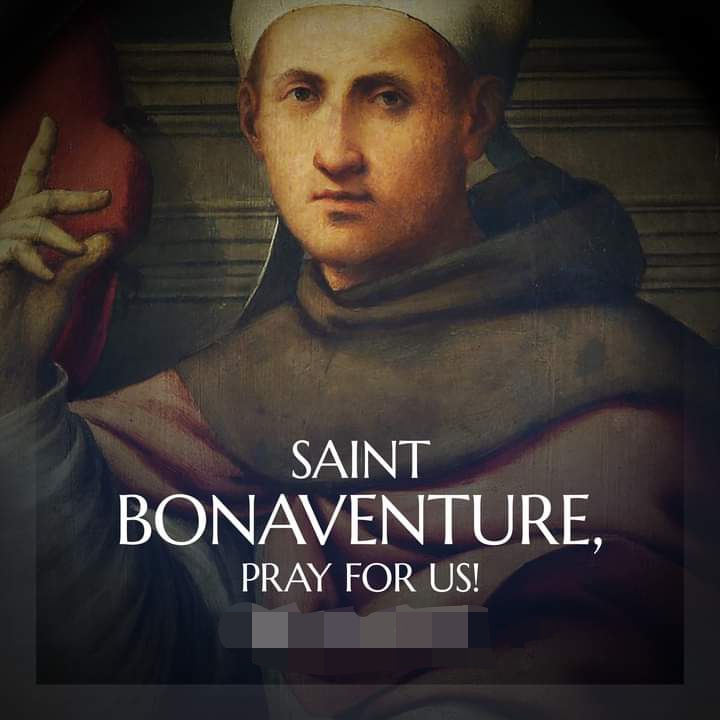 But more importantly, he offered the Friars an organized spirituality based on the vision and insights of Saint Francis. Always a Franciscan at heart and a mystical writer, Bonaventure managed to unite the pastoral, practical aspects of life with the doctrines of the Church. Thus, there is a noticeable warmth to his teachings and writings that make him very appealing.

Shortly before he ended his service as General Minister, Pope Gregory X created him a Cardinal and appointed him bishop of Albano. But a little over a year later, while participating in the Second Council of Lyon, Saint Bonaventure died suddenly on July 15, 1274.

Saint Bonaventure left behind a structured and renewed Franciscan Order and a body of work all of which glorifies his major love—Jesus. He steered the Franciscans on a moderate and intellectual course that made them the most prominent order in the Catholic Church until the coming of the Jesuits.

His theology was marked by an attempt completely to integrate faith and reason. He thought of Christ as the “one true master” who offers humans knowledge that begins in faith, is developed through rational understanding, and is perfected by mystical union with God. 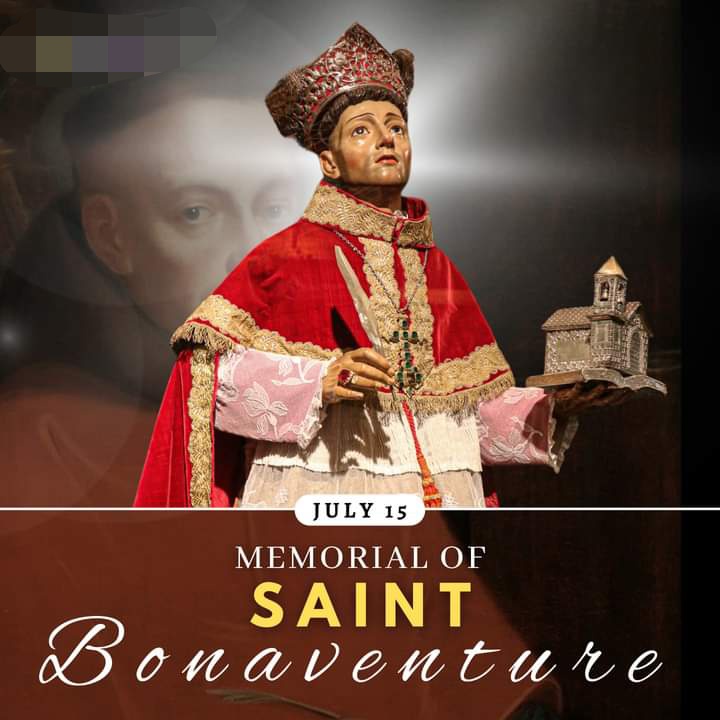 Bonaventure’s feast day was included in the General Roman Calendar immediately upon his canonisation in 1482. It was at first celebrated on the second Sunday in July, but was moved in 1568 to 14 July, since 15 July, the anniversary of his death, was at that time taken up with the feast of Saint Henry.

It remained on that date, with the rank of “double”, until 1960, when it was reclassified as a feast of the third class. In 1969 it was classified as an obligatory memorial and assigned to the date of his death, 15 July. He is the patron saint of bowel disorders. Bonaventure is remembered in the Church of England with a commemoration on 15 July
(Excerpts: franciscanmedia.org)

Almighty God, grant that, as we celebrate the feast of 𝐒𝐚𝐢𝐧𝐭 𝐁𝐨𝐧𝐚𝐯𝐞𝐧𝐭𝐮𝐫𝐞, we may also, like him grow in spiritual wisdom, knowledge and understanding, by emulating the same fervor of charity that was his constant attitude towards his people. 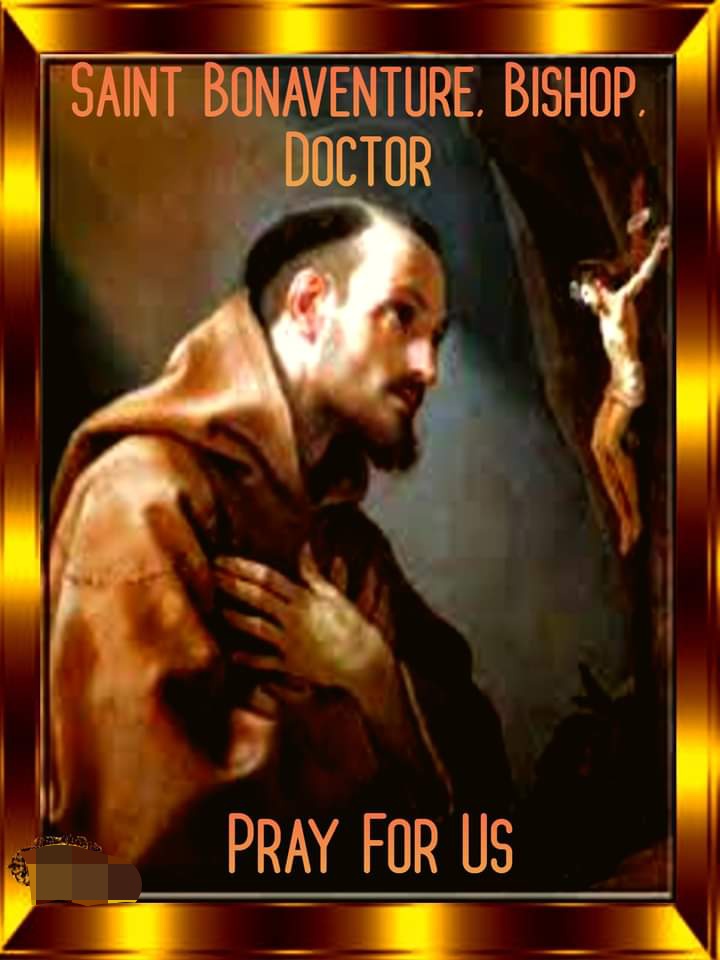