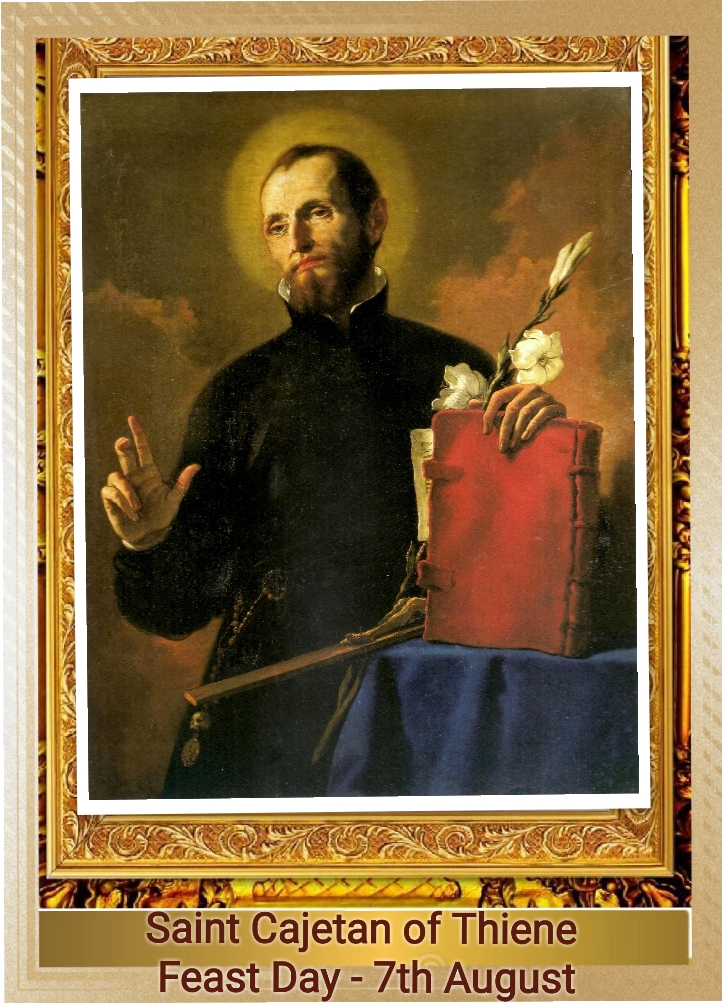 Gaetano dei Conti di Thiene (6 October 1480 – 7 August 1547), known as Saint Cajetan, was an Italian Catholic priest and religious reformer, co-founder of the Theatines. He is recognised as a saint in the Catholic Church, and his feast day is 7 August. Cajetan was born in October 1480, the son of Gaspar, lord of Thiene, and Mary Porta, persons of the first rank among the nobility of the territory of Vicenza, in Veneto Region.

His father died when he was two years of age. Quiet and retiring by nature, he was predisposed to piety by his mother. Cajetan studied law in Padua, receiving his degree as doctor utriusque juris (i.e., in civil and canon law) at age 24. In 1506 he worked as a diplomat for Pope Julius II, with whom he helped reconcile the Republic of Venice. But he was not ordained a priest until the year 1516.

With the death of Pope Julius II in 1513, Cajetan withdrew from the papal court. Recalled to Vicenza by the death of his mother, he founded in 1522 a hospital for incurables there. By 1523 he had established a hospital in Venice, as well. His interests were as much or more devoted to spiritual healing than the physical kind, and he joined a confraternity in Rome called the “Oratory of Divine Love”. He intended to form a group that would combine the spirit of monasticism with the exercises of the active ministry.

A new congregation was canonically erected by Pope Clement VII in the year 1524. One of his four companions was Giovanni Pietro Carafa, the Bishop of Chieti, elected first superior of the order, who later became pope as Paul IV. From the name of the city of Chieti (in Latin: Theate), arose the name by which the order is known, the “Theatines”. 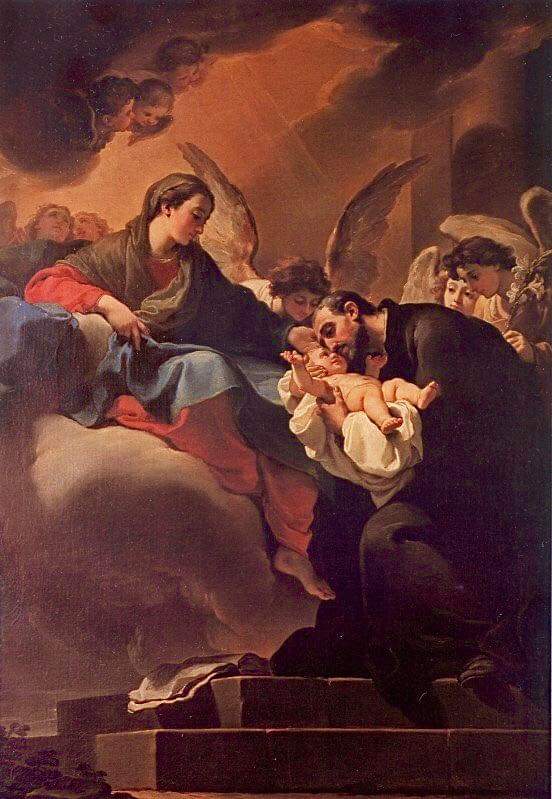 The order grew at a fairly slow pace: there were only twelve Theatines during the sack of Rome in 1527, during which Cajetan was tortured by the Spanish soldiers of Charles V who had mutinied. The Theatines managed to escape to Venice. There Cajetan met Jerome Emiliani, whom he assisted in the establishment of his Congregation of Clerks Regular.

In 1533 he founded a house in Naples. The year 1540 found him in Venice again and from there he extended his work to Verona. He founded a bank to help the poor and offer an alternative to usurers (who charged high interest rates). It later became the Banco di Napoli. Cajetan died in Naples on 7 August 1547. His remains are in the church of San Paolo Maggiore in Naples; outside the church is Piazza San Gaetano, with a statue.

He was beatified on 8 October 1629 by Pope Urban VIII. On 12 April 1671 Cajetan was was canonized. Saint Cajetan’s feast day is celebrated on 7 August. St. Cajetan of Thiene is the patron saint of Argentina, the gamblers, document controllers, gamers, and good fortune. He’s also the patron saint of the unemployed and job seekers. 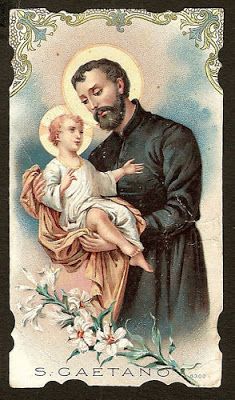 St. Cajetan is also the patron saint of bankers, since he established what is now one of the oldest operating banks in the world. Jesuit missionary Eusebio Kino in 1691 established the mission San Cayetano de Tumacácori in honor of Cajetan. It is now Tumacacori National Historical Park in Arizona.

Saint Cajetan was a spiritual aspirant in the mould of St. Francis of Assisi who gave up his riches for leading a life of Christian piety. Fully committed and dedicated as one who practiced total renunciation of material riches would be, he was unwavering in his pursuit of the spiritual goals and never allowed himself to be distracted from realizing them. To the end, he was immersed in his work; and he meets, fully and favourably, the hopes and aspirations of those seeking his intercession.

Lord God, we thank You for giving us your priest, St. Cajetan of Thiene, as an example of holiness. Help us to imitate the devotion to You that he showed by choosing to serve You as a priest.

St. Cajetan of Thiene, you first learned about the Faith from you pious mother. From her, you learned how to serve God with devotion. As a young man, you studied the Faith more as you earned a degree in canon law.

You did not immediately set out to become a priest, but you eventually realized God was calling you to this path. Pray that I may be open to God leading me in an unexpected direction. Pray that I will be open to following Him.

As a priest, you served God wholeheartedly. You served Him in the poor and suffering, and you desired to reform His Church. Pray for me, that I may serve God as fervently as you did! 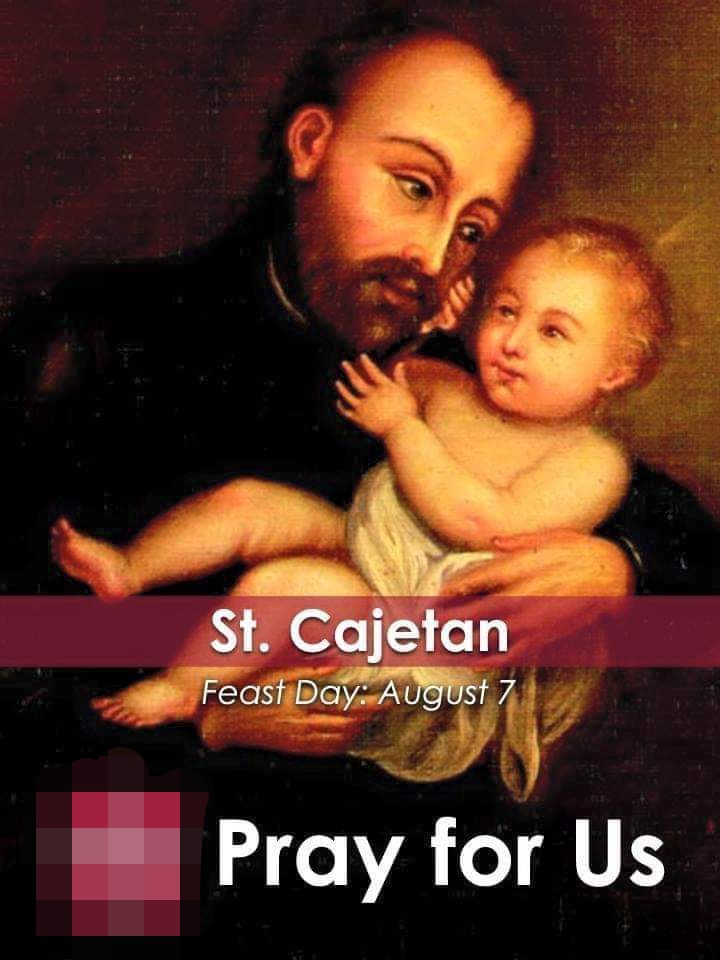