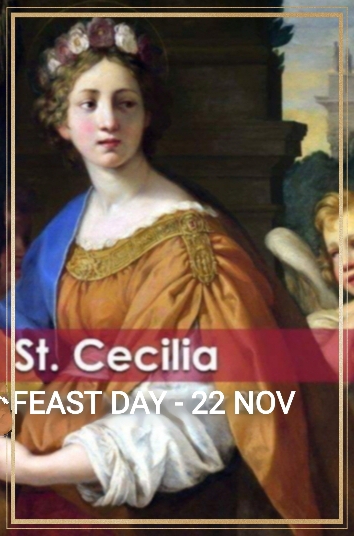 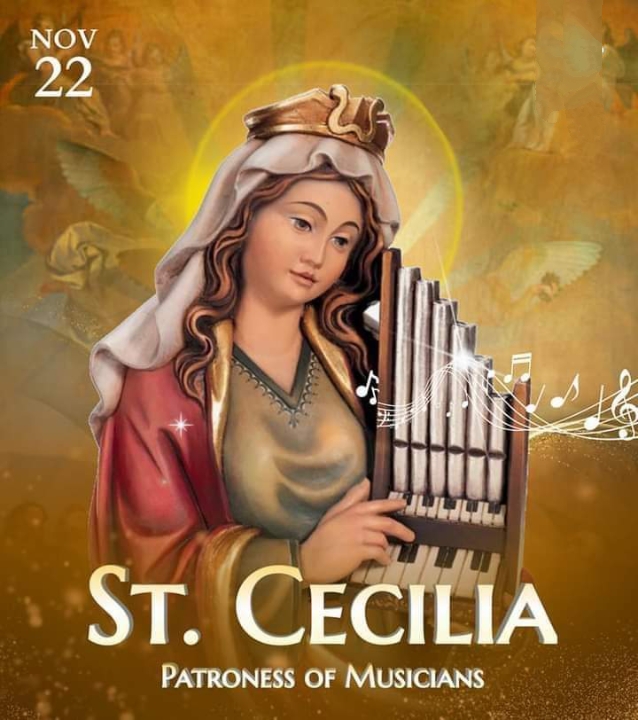 Saint Cecilia, was born in the 3rd century, Rome, Italy, and came from an extremely rich family. She was given in marriage to a youth named Valerian. She wore sackcloth next to her skin, fasted, and invoked the saints, angels, and virgins, beseeching them to guard her virginity. A devout Christian, she had pledged herself to chastity. However, her parents arranged for her to marry the noble Valerian. At the wedding celebration, her thoughts were only of God. 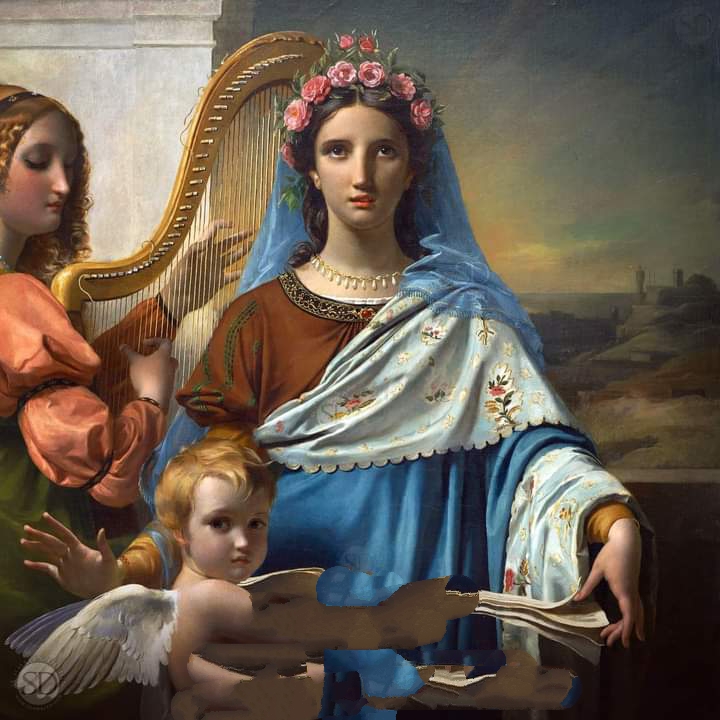 She was said to have sung in her heart to God and before the consummation of her nuptials, she told her husband she had taken a vow of virginity and had an angel protecting her. Valerian asked to see the angel as proof, and Cecilia told him he would have eyes to see once he traveled to the third milestone on the Via Appia, Appian Way and was baptized by Pope Urbanus. Following his baptism, Valerian returned to his wife and found an angel at her side. The angel had flaming wings, and crowned them both with roses and lilies, the symbols of both love and chastity. They thus entered into a purely spiritual marriage. 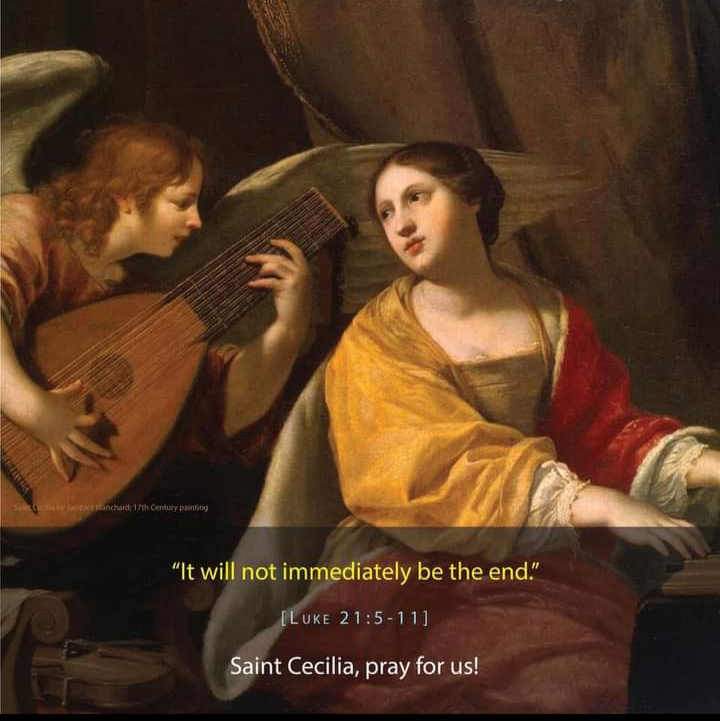 Valerian’s brother, Tibertius, heard of the angel and his brother’s baptism. He came to meet them, and sensed a sweet presence. He, was thus won over to Christianity, and was baptized. Together, the brothers dedicated their lives to distributing alms to the poor and needy, burying the bodies of the martyrs and saints, who were murdered each day by the prefect, Turcius Almachius. Cecilia spent her time preaching, converting over four hundred people, in her lifetime, baptized by Pope Urban. 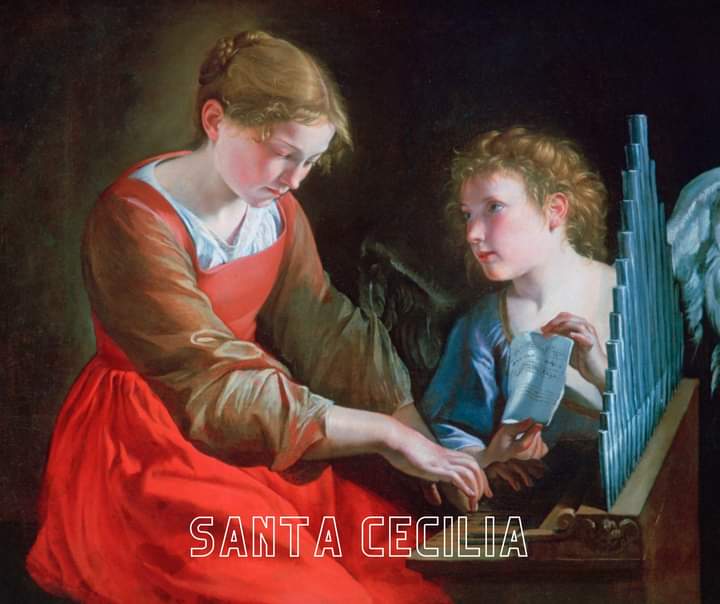 The Roman prefect, condemned the brothers to death, appointing his officer, Maximus, to execute the sentence. Maximus himself was converted, however, and suffered martyrdom with the two brothers. Cecilia, still a virgin, soon joined them in her own glorious but gruesome death. The dates of these martyrdoms are clouded, with scholars suggesting dates ranging from the late second through early fourth century. 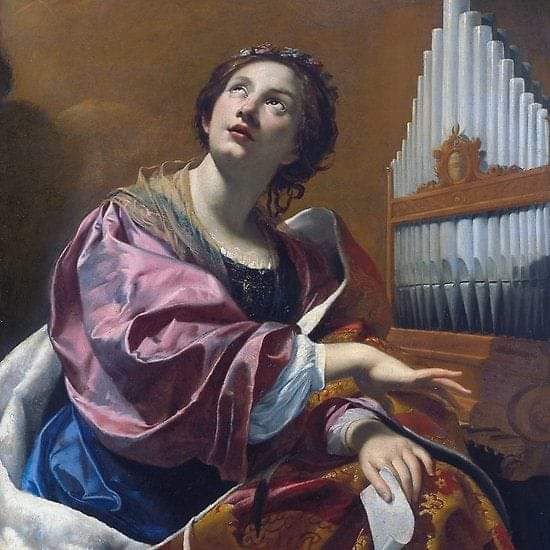 Cecilia gloriously professed her faith, and was condemned to be suffocated in the bath of her house. She remained almost miraculously unharmed in the oxygenless room, and the prefect ordered that she be decapitated instead. The executioner struck her neck thrice, with his sword, without severing her head. Terrified, he fled, leaving the virgin bathed in her own blood. She lived three days, made dispositions of her wealth in favor of the poor, and provided that after her death her house should be dedicated as a church. The Pope then buried her among the other bishops of Rome and the confessors, in the Catacomb of Callistus. 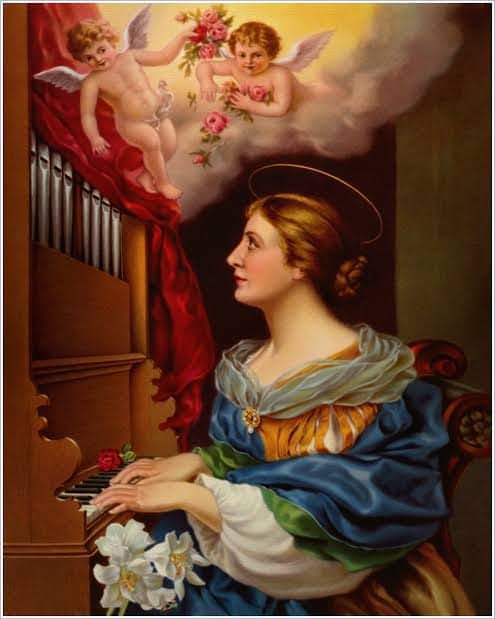 It is said that there was a church dedicated to St. Cecilia in Rome in the fifth century, in which Pope Symmachus held a council in 500. The church of Santa Cecilia in Trastevere exists in Rome, traditionally believed to be built on the spot of her own home and martyrdom. Dating from about the fifth century, it was rebuilt with much splendor by Pope Paschal I around the year 820 and again in 1599, Cardinal Paolo Emilio Sfondrati, nephew of Pope Gregory XIV, rebuilt the Church. 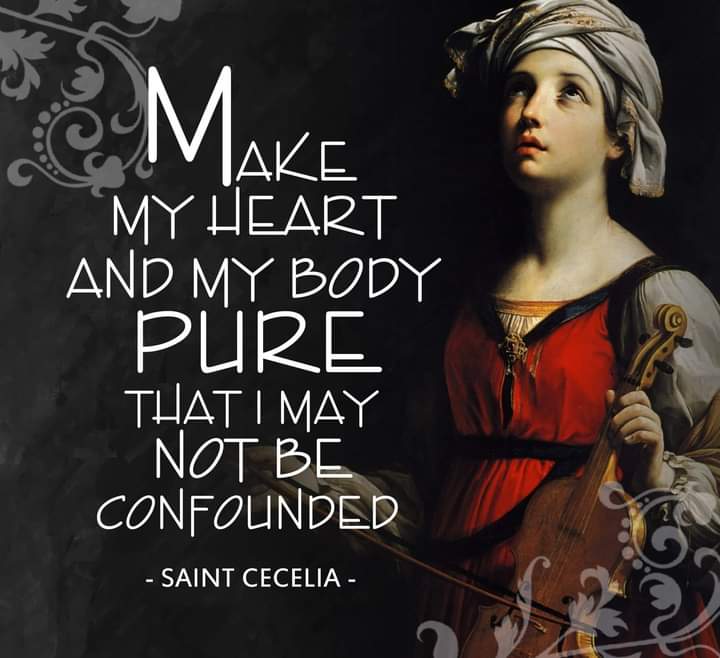 Officials exhumed her body in 1599 and found her to be incorrupt, the first of all incorrupt saints. She was draped in a silk veil and wore a gold embroidered dress. Officials only looked through the veil in an act of holy reverence and made no further examinations. They also reported a “mysterious and delightful flower-like odor which proceeded from the coffin.”
St. Cecilia’s remains were transferred to Cecilia’s titular church in Trastevere and placed under the high altar. 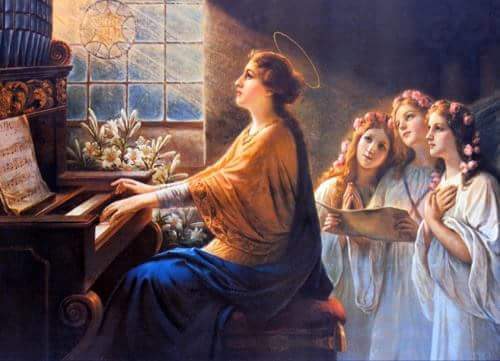 Saint Cecilia is regarded as the patron of musicians and Church music. Venerated in both East and West, she is one of the eight women commemorated by name in the Canon of the Mass. She is typically represented with the organ or other musical instrument as her attribute. Celebrated as a virgin martyr, her feast day is in the Roman Catholic, Eastern Orthodox, and Eastern Catholic Churches on November 22. 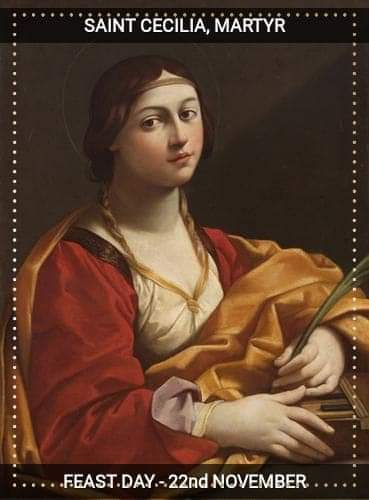 O glorious Saint, who chose to die instead of denying your King.
We pray you please to help us as His fair praise we sing!
We lift our hearts in joyous song to honor Him this way.
And while we sing, remembering to sing is to doubly pray.
At once in our hearts and our tongues we offer double prayer
Sent heavenward on winged notes to praise God dwelling there.
While with our hearts and tongues we try with song to praise God twice.
We ask dear Saint to help us be united close with Christ! 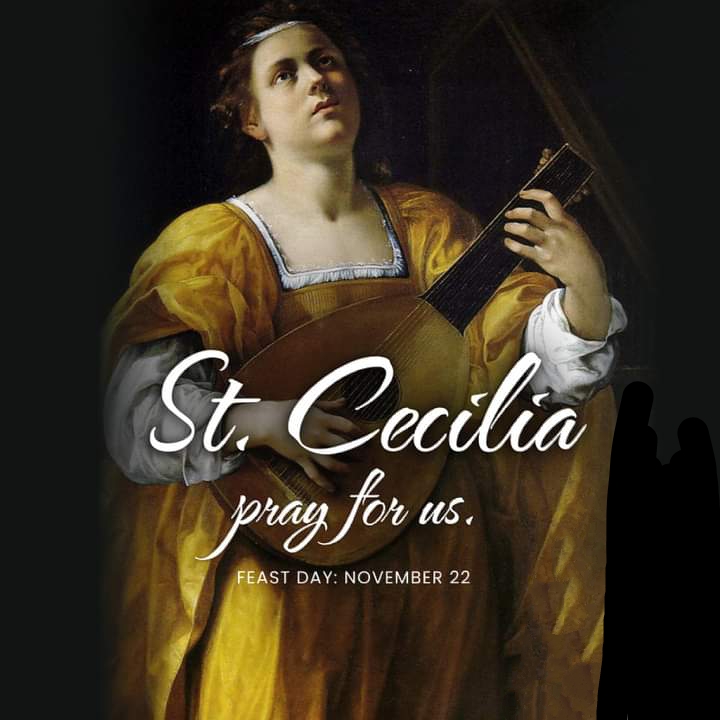 St. Cecilia, we ask for your intercession because you generously offered your life for the love of Jesus, who you were devoted to with your heart and soul. Saint Cecilia, pray for us. 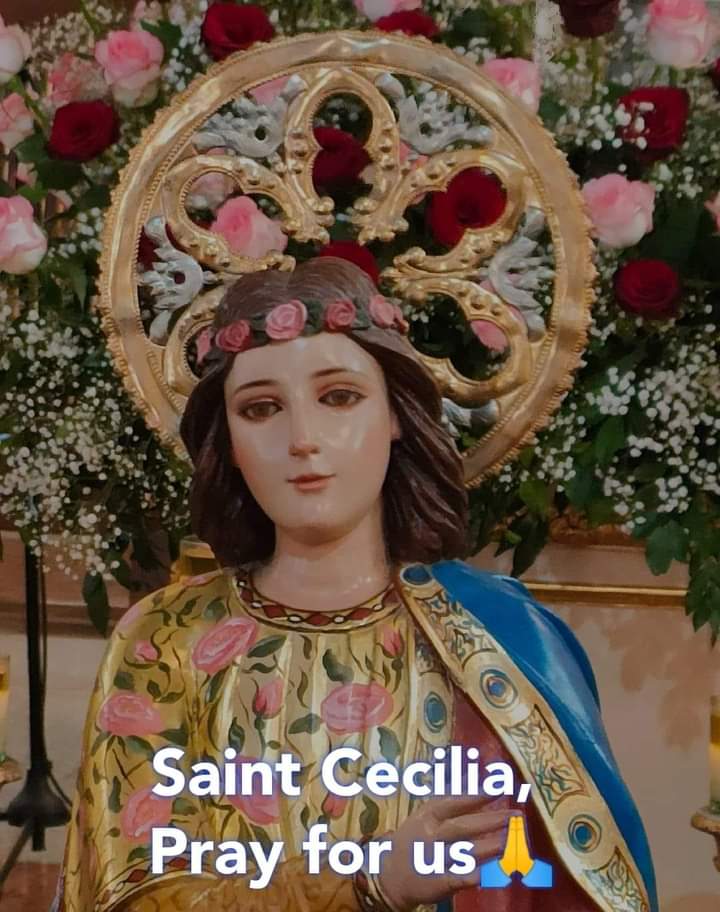