FEAST OF THE DIVINE MERCY 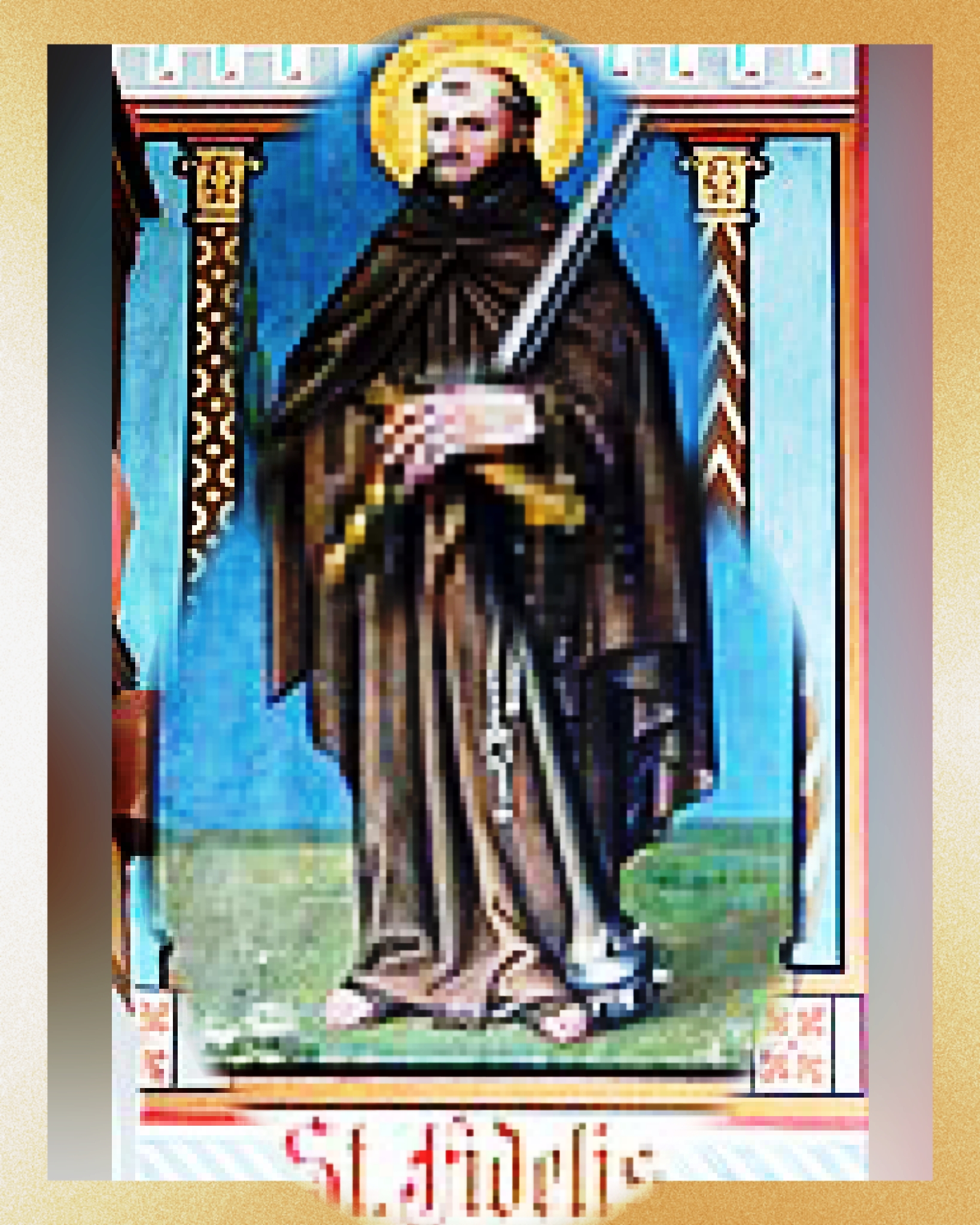 Fidelis of Sigmaringen, O.F.M. Cap. (1577 – 1622) was a Capuchin friar who was involved in the Catholic Counter-Reformation, and was martyred by his opponents at Seewis im Prättigau, now part of Switzerland. Fidelis was canonized in 1746. A former lawyer who left his profession to become a Capuchin Franciscan priest, Fidelis of Sigmaringen has his liturgical memorial on April 24.

Fidelis’ life bridged the sixteenth and seventeenth centuries, a time of religious conflict in Western Europe. He died at the hands of a mob while preaching in Switzerland, where he had gone to combat the Calvinist heresy. The future “Fidelis” received the name of Mark Rey at the time of his birth, during 1577 in present-day Germany. Mark studied at the University of Freiburg, and worked for a time as a private tutor. Eventually he went back to the university and earned his law degree around 1611.

Though he had already shown signs of devotion to God and studied canon law alongside civil law, Mark opted for a secular career as an attorney. Within a year he was known as “the poor man’s lawyer” because of his concern for the needy. Just as quickly, he became disgusted with the corrupt ways of his chosen field . Leaving his legal practice Mark decided to serve Christ and the Church, and joined the Capuchin Franciscans in Freiburg.

With his entry into the order he received the name “Fidelis,” meaning “faithful” — after the words of Jesus Christ in the Book of Revelation, “Remain faithful until death, and I will give you the crown of life.” As he embraced radical poverty and simplicity, the attorney who turned Franciscan, left his inheritance to a scholarship fund for poor seminarians, who also received his books. 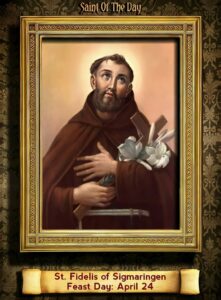 Fidelis showed his love for God through prayer and fasting, while caring for his neighbors through preaching, writing, and the celebration of the sacraments. He showed particular care for the poor and sick, and was especially revered for his work among Austrian soldiers who were suffering from a plague epidemic. During 1614, a Swiss Catholic bishop had sought help from the Capuchins, to restore the faith and counteract the spread of Calvinist Protestantism.

In 1621, Fidelis was sent on the mission. He brought just four items: a Bible, a prayer book, a crucifix and a copy of the Capuchin rule. The winter of 1621- 22 was a busy period of preaching, instruction and theological disputation for the Franciscan priest. He preached not only in the pulpits of Catholic churches, but also in public places, and even in the meeting-places of the Calvinists themselves.

Many residents of the town and neighboring places were reformed by his zealous labors, and several Calvinists were converted. The Congregation of the Doctrine of the Faith commissioned Fidelis to preach in the Graubünden region of eastern Switzerland. Eight other Capuchin friars were to be his assistants, and they labored in this mission under his direction.

The Calvinists of that territory, being incensed at his success in converting their brethren, loudly threatened Fidelis’ life, and he prepared himself for martyrdom. Ralph de Salis and another Calvinist gentleman were both converted by his missionary efforts. Fidelis and his companions entered into Prättigau, a small district of Graubünden, in 1622, on the Feast of the Epiphany, January 6.

The effects of his ardent zeal, about which the Bishop of Coire sent a lengthy and full account to the Congregation for the Propagation of the Faith, enraged the Calvinists in that province. On April 24, 1622, Fidelis made his confession, celebrated Mass and then preached at Grüsch. At the end of his sermon, which he had delivered with more than ordinary zeal, he stood silent all of a sudden, with his eyes fixed upon Heaven, in ecstasy.

He foretold his death to several persons in the clearest terms, and began signing his letters, “P. Fidelis, prope diem esca vermium” (“Father Fidelis, in days ahead to become food for worms”). After the service at Grüsch he and several companions traveled to Seewis. His companions noted that he was particularly cheerful. On April 24, in a campaign organized by the Habsburgs, Fidelis was preaching under protection of some Austrian imperial soldiers in the Church at Seewis with the aim of reconverting the people of Seewis to Catholicism. 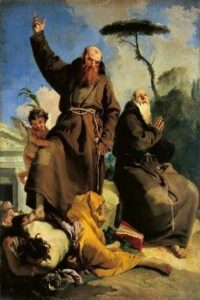 During the sermon, his listeners were called “to arms” by the Calvinist agitators outside. Some of the people went to face the Austrian troops outside the church. Fidelis had been persuaded by the remaining Catholics to immediately flee with the Austrian troops out of Seewis, which he did, but then returned alone to Grüsch. On his way back he was confronted by 20 Calvinist soldiers who demanded unsuccessfully that he renounce the Catholic faith.

When he refused, they subsequently murdered him. It is said that a Catholic woman lay concealed near the place of Fidelis’ martyrdom as the saint was slain. After the soldiers had left, she came out to assess the incident and found the martyr’s eyes open, fixed on the heavens. He was buried by Catholics the next day.

The rebels were soon after defeated by the imperial troops, an event which the martyr had foretold. The Protestant minister who had participated in Fidelis’ martyrdom was converted by this circumstance, made a public abjuration of Calvinism and was received into the Catholic Church.

After six months, the martyr’s body was found to be incorrupt, but his head and left arm were separated from his body. The body parts were then placed into two reliquaries, one sent to the Cathedral of Coire, at the behest of the bishop, and laid under the High Altar; the other was placed in the Capuchin church at Weltkirchen, Feldkirch, Austria. Saint Fidelis’ feast day in the Catholic Church is celebrated on April 24.

O God, Who were glad to favor the palm of martyrdom to Saint Fidelis as, with intensity of love for you, he propagated the faith, grant, we pray, that through his intercession, we may merit, in humility and charity, to merit with him, the rewards through the Power of the Resurrection of Christ.

Who lives and reigns with you in the unity of the Holy Spirit, one God, for ever and ever. Amen 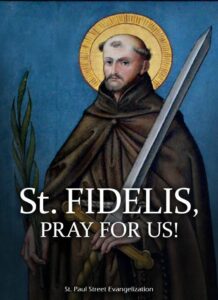 Saint Fidelis of Sigmaringen, pray for us.