FEAST OF THE BLESSED CARMELITE MARTYRS OF COMPIÈGNE – 17th JULY 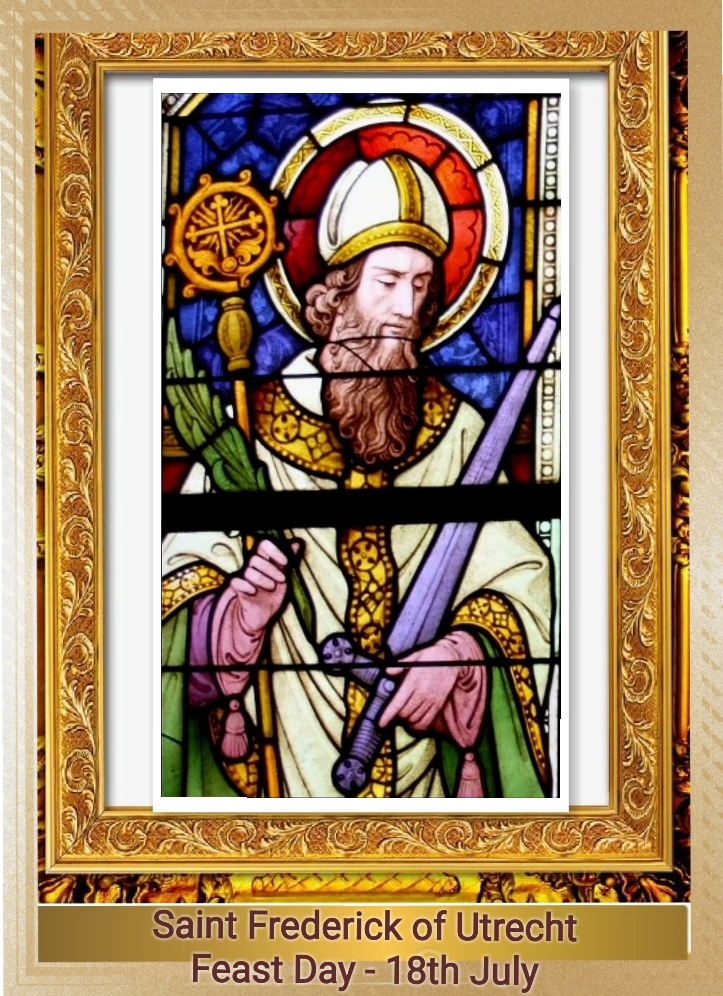 Frederick I was Bishop of Utrecht between 815/816 and 834/838 AD, and is a saint of the Eastern Orthodox Church and Roman Catholic Church. Frederick was born around 780 in Friesland and was a grandson of the Frisian King Radboud. According to Church records, he died on 18 July 838 but other sources give dates between 834 and 838.

Frederick, the member of an illustrious family among the Frisians, was educated by the clergy of the Church of Utrecht. Filled with piety and learned in spiritual things, he was ordained by Bishop Rickfield and given the task of instructing catechumens. In 820, Frederick succeeded the same prelate as Bishop of Utrecht.

The Saint was consecrated in the presence of the Emperor, Louis the Debonair, who advised him to stamp out the remaining vestiges of idolatry in Friesland. Frederick took the advice and sent zealous laborers into the north to extirpate the paganism still lurking there. He reserved for himself the most troublesome territory, Walcheren, an island belonging to The Netherlands that was rampant with incestuous marriages contracted within the forbidden degrees.

At a young age he was taught at Utrecht by the clergy, including Bishop Ricfried. After completing his studies he was ordained priest and put in charge of converting the remaining heathens in the northern areas of the diocese, but also in areas outside of the diocese. It is known that he preached at Walcheren, together with St. Odulfus in Stavoren and its surroundings.

Frederick was known for his piety and erudition. He maintained a correspondence with Rabanus Maurus. He was praised for his knowledge and understanding during the synod of Mainz in 829. It is unclear exactly how Frederick came to an end. It has been established that he was murdered, but by whom and why is unclear.

Legend tells that he was stabbed by two men after the offering of the Mass on 18 July 838. According to the 11th and 12th century writers Bishop Otbert of Liège (Passio Frederici) and William of Malmesbury, the killers were hired by Empress Judith, because of Frederick’s regular criticism of her dissolute way of life. Later writers like Cesare Baronio and Jean Mabillon write that the inhabitants of Walcheren, who were hostile to Christianity, sent them as a response to Frederick’s preaching there.

The latter seems the most plausible. There are no sources of writers of the time showing that the empress was unchaste or immoral, or that Frederick had made that allegation. Moreover, Walcheren was quite hostile to the missionaries from Utrecht. 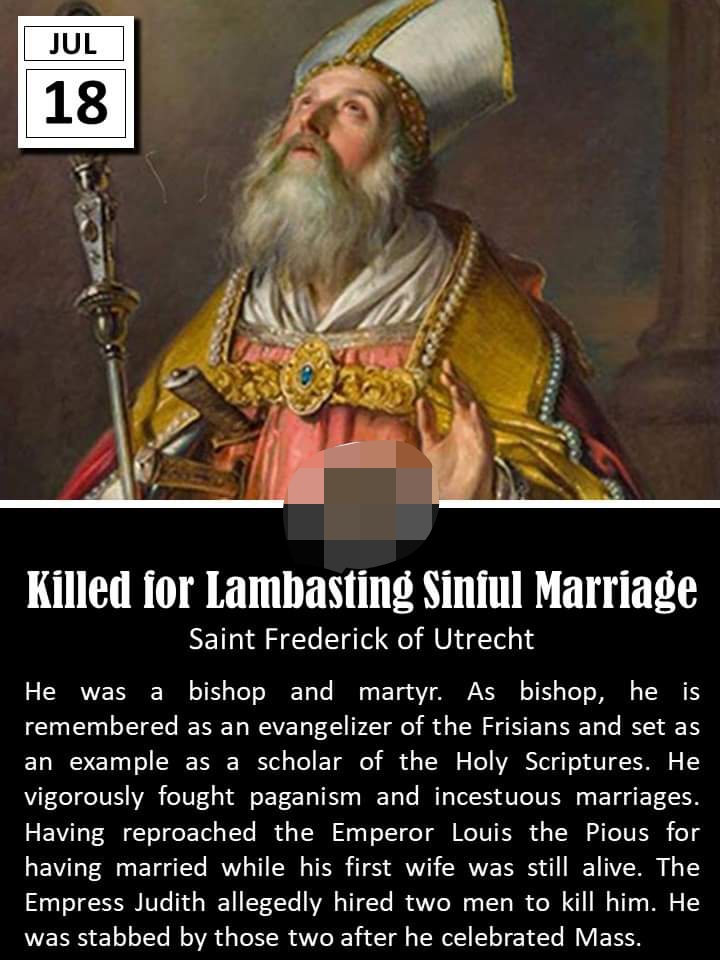 According to tradition St. Frederick became involved in the difficulties between the sons of the emperor, Louis the Debonair, and their father and step-mother. During these disturbances the party of the young princes charged the Empress Judith with numerous immoralities.

Whatever may have been the truth of these stories, St. Frederick is said to have admonished her of them, with charity but with the effect of drawing upon himself the fury and resentment of the empress. He also got himself disliked elsewhere. The inhabitants of Walcheren were barbarous and most averse from the Gospel.

On which account, St. Frederick, when he sent priests in the northern part of his diocese, took this most dangerous and difficult part chiefly to himself; and nothing gave him more trouble than marriages contracted within the forbidden decrees and the separation of the parties (that the union of Louis and Judith was itself incestuous was an afterthought of hagiographers

The story goes on that, on July 18, 838, after St. Frederick had celebrated Mass and was about to make his thanksgiving, he was stabbed by two assassins. He died in a few minutes, reciting that verse of Psalm 144, “I will praise the Lord in the land of the living”. The eleventh century author of his life says that these assassins were employed by the Empress Judith, who could not pardon the liberty he had taken to reprove her sins, and was incited thereto by her husband.

William of Malmesbury and others repeat the same; but later writers, such as Baronius and Mabillon, think that they were rather sent by some of the inhabitants of Walcheren. And this seems the more likely opinion: for no contemporary makes the charge against Judith and it is not at all in consonance with the attitude of Louis towards episcopal authority and Christian conduct.

Frederick composed a prayer to the Blessed Trinity which for many ages was used in the Netherlands. The reputation of his sanctity appears from a poem of Rabanus Maurus, his contemporary, in praise of his virtues

Shortly after his death, Frederick was canonized. His feast day is 18 July and he is the patron saint of the deaf. He was buried in St. Salvator’s Church in Utrecht.

God our Father, your servant Saint Frederick worked unceasingly to eradicate evil from the people, by means of assiduous exhortations, tears, watching, prayer and fasting.

He sent forth ways and means by which wicked abominations such as illegal marriages could be eliminated for good, and brought back to you numberless persons who were truly contrite.

May we, likewise, work for the cause of sanctification of souls, and reconcile people with you, thus establishing your greater glory, through Christ our Lord. Amen 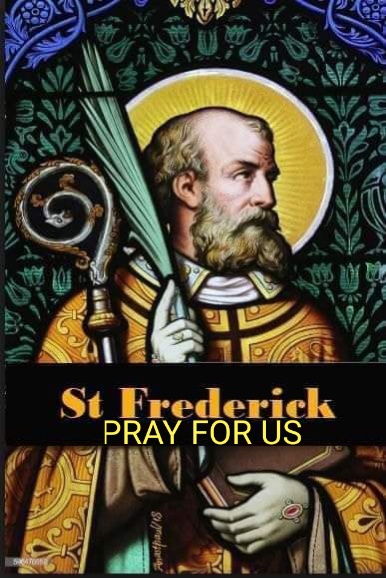