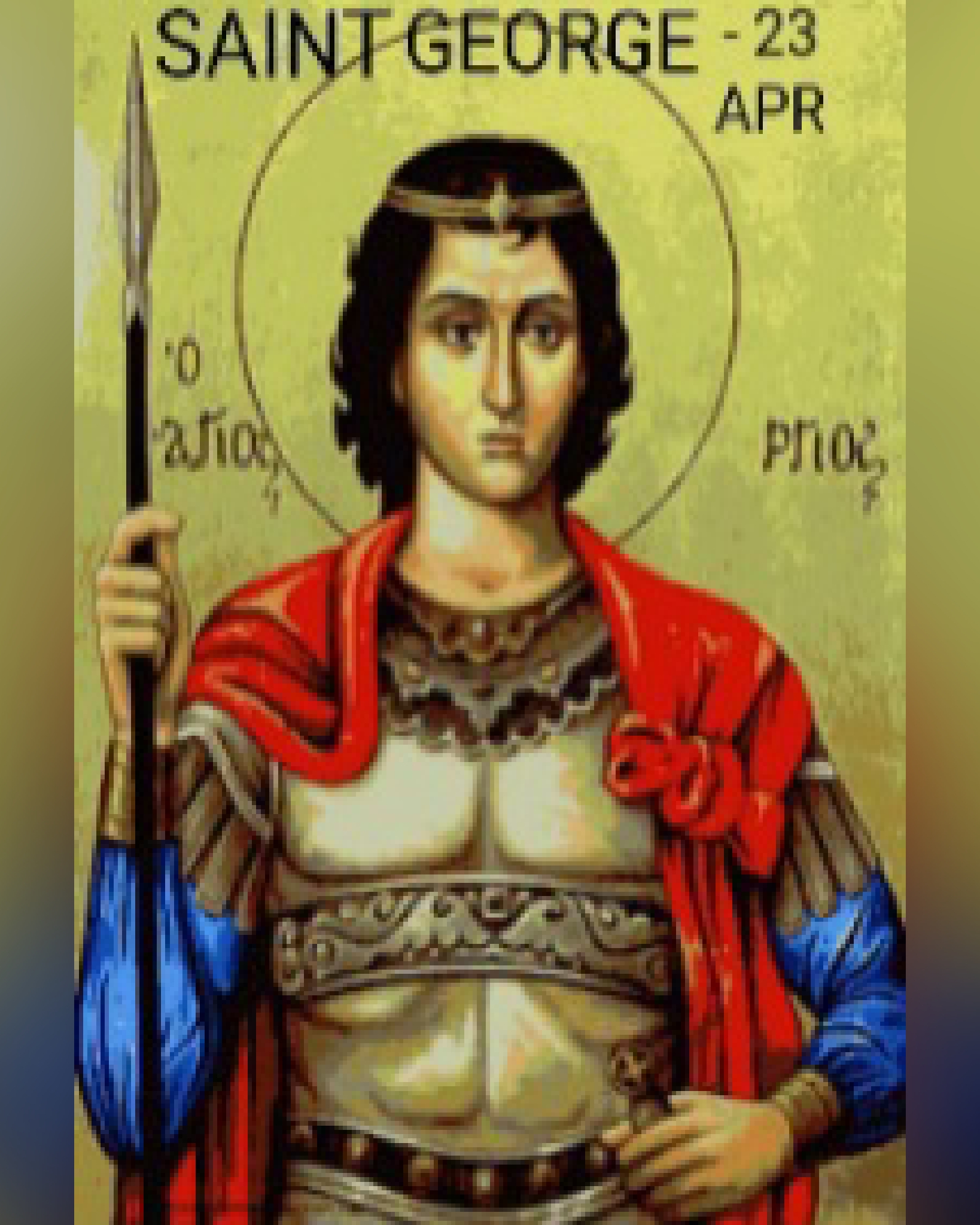 Saint George’s Day, also called the Feast of Saint George, is the feast day of Saint George as celebrated by various Christian Churches and by the several nations, old kingdoms, regions, states, countries and cities of which Saint George is the patron saint – including Bulgaria, England, Georgia, Portugal, Romania as well as the Spanish communities of Cáceres, Alcoy, Aragon and Catalonia. The saint also has his state holiday in Rio de Janeiro, Brazil.

Saint George (ca. 275/281 – April 23, 303 C.E.), also known as George of Lydda, is one of the most venerated saints in the Anglican Church, Eastern Orthodox Church, Oriental Orthodox Churches, and the Eastern Catholic Churches. Enlisted as a Roman soldier in the Guard of Emperor Diocletian, he was martyred for his beliefs and became regarded as one of the most prominent military saints. Christian folklore also honours him through the popular tale of Saint George and the Dragon.

George (meaning “worker of the land”) was born to a Christian noble family during the late third century between about 275 C.E. and 285 C.E., in Lydda Palestine. His father Geronzio was a Roman army official from Cappadocia and his mother from Palestine. They were both Christians and from noble families and the child was raised with Christian beliefs. At the age of 14, George lost his father; a few years later, George’s mother Policronia died.

George subsequently decided to go to Nicomedeia, the imperial city of that time, and present himself to Emperor Diocletian to apply for a career as a soldier. Diocletian welcomed him with open arms, as he had known his father Geronzio—one of his finest soldiers. By his late twenties, George was promoted to the rank of Tribunus and stationed as an imperial guard of the Emperor at Nicomedeia. 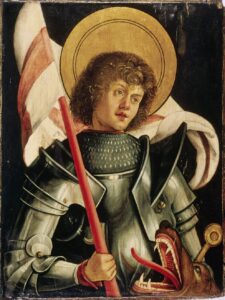 Diocletian (influenced by Galerius) issued an edict that every Christian soldier in the army should be arrested and every other soldier should offer a sacrifice to the Pagan gods. George, however, objected and with the courage of his faith approached the Emperor and ruler. Diocletian was upset, not wanting to lose his best Tribune and the son of his best official, Geronzio.

George loudly renounced the Emperor’s edict, and in front his fellow soldiers and Tribunes he claimed himself to be a Christian and declared his worship of Jesus Christ. Diocletian attempted to convert George, even offering gifts of land, money and slaves if he made a sacrifice to the Pagan gods. The Emperor made many offers, but George never accepted.

Recognizing the futility of his efforts, Diocletian was left with no choice but to have him executed for his refusal. Before the execution George gave his wealth to the poor and prepared himself. After various torture sessions, including laceration on a wheel of swords in which he was miraculously resuscitated three times, George was executed by decapitation before Nicomedia’s city wall, on April 23, 303.

A witness of his suffering convinced Empress Alexandra and Athanasius, a pagan priest, to become Christians as well, and so they joined George in martyrdom. His body was returned to Lydda for burial, where Christians soon came to honor him as a martyr. Saint George’s Day is normally celebrated on 23 April. However, the Church of England rules denote that no saints’ day should be celebrated between Palm Sunday and the Sunday after Easter Day.

If 23 April falls in that period, the celebrations are transferred to after it. 23 April is the traditionally accepted date of the saint’s death in the Diocletianic Persecution of AD 303. Countless stories are told about St. George, including the famous episode of the dragon and the girl saved by the saint.

According to the standard version of the legend, we hear that in the city of Selem in Libya, there was a large pond where a terrible dragon lived. To appease it, the inhabitants offered him two sheep a day and later a sheep and a child drawn by lot. One day the king’s daughter was chosen, and while she was heading toward the pond, George passed by and pierced the dragon with his spear; a gesture that became a symbol of faith triumphing over evil. 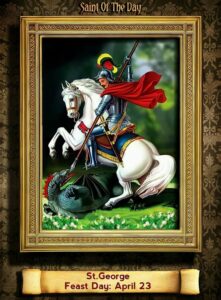 The first piece of evidence of George’s existence appeared within the works of the Bollandists Daniel Papebroch, Jean Bolland, and Godfrey Henschen’s Bibliotheca Hagiographica Graeca. George was one of several names listed in the historical text, and Pope Gelasius claimed George was one of the saints “whose names are justly reverenced among men, but whose actions are known only to God.”

Another of the several stories about George fighting dragons, is the Western version, where a dragon or crocodile made its nest at a spring that provided water to Silene, believed to be modern day Cyrene in Libya. The people were unable to collect water and so attempted to remove the dragon from its nest, but it would temporarily leave its nest when they offered it a sheep.

This continued until all the sheep disappeared and the people were distraught. This was when they decided that a maiden would be just as effective as sending a sheep. The townspeople chose the victim by drawing straws, until one day, the princess’ straw was drawn.

The monarch begged for her to be spared but the people would not have it. She was offered to the dragon, but before she could be devoured, George appeared. He faced the dragon, protected himself with the sign of the Cross, and slayed the dragon. 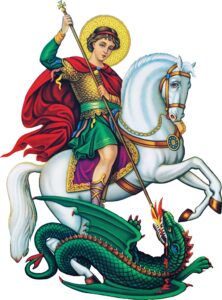 After saving the town, the citizens abandoned their paganism and were all converted to Christianity. Saint George stands out among other saints and legends because he is known and revered by both Muslims and Christians. It is said Saint George killed the dragon near the sea in Beirut, thus Saint George bay was named in his honor.

The Russian Orthodox Church celebrates three St. George feast days each year -April 23 as is expected, November 3, to commemorate the consecration of a cathedral dedicated to him in Lydda, and on November 26, for when a church in Kiev was dedicated to him. In Bulgaria, his feast day is celebrated May 6 with the slaughter and roasting of a lamb.

In Egypt, the Coptic Orthodox Church of Alexandria calls St. George the “Prince of Martyrs” and celebrates on May 1. There is a second celebration November 17, in honor of the first church dedicated to him. Saint George is the patron saint of England and Catalonia and his cross can be found throughout England.

In older works, Saint George is depicted wearing armor and holding a lance or fighting a dragon, which represents Christ’s enemies. A church built in Lydda during the reign of Constantine I (reigned 306–337), was consecrated to “a man of the highest distinction,” according to the church history of Eusebius of Caesarea; the name of the patron was not disclosed, but later he was asserted to have been George. 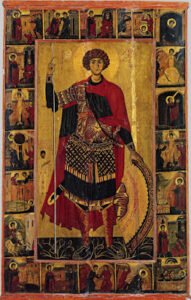 The church was destroyed in 1010 but was later rebuilt and dedicated to Saint George by the Crusaders. In 1191, and during the conflict known as the Third Crusade (1189–1192), the church was again destroyed by the forces of Saladin, Sultan of the Ayyubid dynasty (reigned 1171–1193). A new church was erected in 1872 and is still standing.

During the fourth century the veneration of George spread from Palestine through Lebanon to the rest of the Eastern Roman Empire—though the martyr is not mentioned in the Syriac Breviarium—and Georgia. In Georgia, the feast day on November 23 is credited to Saint Nino of Cappadocia, who in Georgian hagiography is a relative of Saint George, credited with bringing Christianity to the Georgians in the fourth century.

O God, you favored Saint George with strength and constancy in the various tortures and agony which he underwent for our holy faith; we beseech you to preserve, through his intercession, our faith from wavering and doubt, so that we may serve you with a sincere heart, faithfully, unto death. Through Christ our Lord. Amen 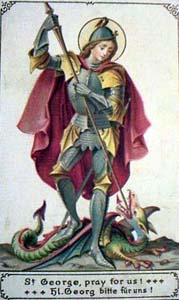 Saint George, pray for us.