SEPTEMBER DEVOTED TO OUR LADY OF SORROWS 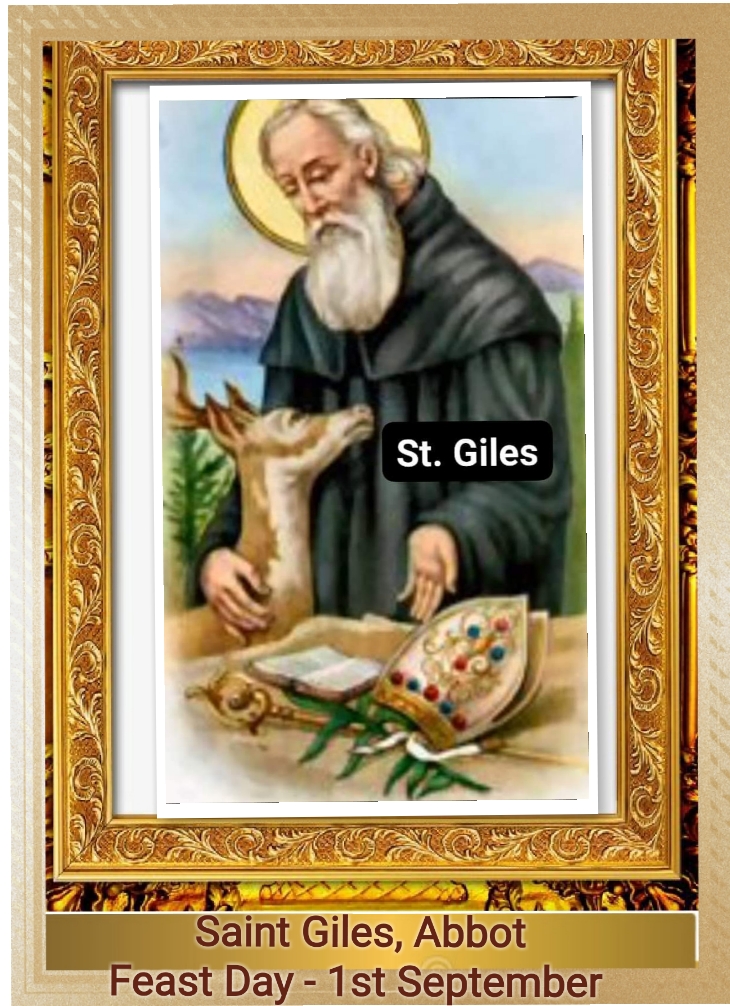 Saint Giles, also known as Giles the Hermit, was a monk active in the lower Rhône most likely in the 6th century. Revered as a saint, his cult became widely diffused but his hagiography is mostly legendary. A town that bears his name grew up around the monastery he purportedly founded, which became a pilgrimage centre and a stop on the Way of Saint James. He is traditionally one of the Fourteen Holy Helpers.

The legend of Giles connects him to Caesarius of Arles, who died in 543. In 514, Caesarius sent a messenger, Messianus, to Pope Symmachus in the company of an abbot named Aegidius. It is possible that this abbot is the historical figure at the basis of the legend of Saint Giles.

There are two forged Papal bulls purporting to have been issued by Pope John VIII in 878. Sometimes taken as authentic, they record that the Visigothic king Wamba founded a monastery for Giles and that Pope Benedict II granted a charter to this foundation in 684–685. In actuality, the monastery was not dedicated to Saint Giles before about 910. The tomb of Giles dates to the correct historical period, but the inscription is from the 10th century.

Giles first lived in retreats near the mouth of the Rhône and by the River Gard in Septimania in the Visigothic Kingdom. The story that he was a Greek, the son of King Theodore and Queen Pelagia of Athens, is probably an embellishment of his early hagiographers; it was given wide currency in the Legenda Aurea. The two main incidents in his legend were often depicted in art. 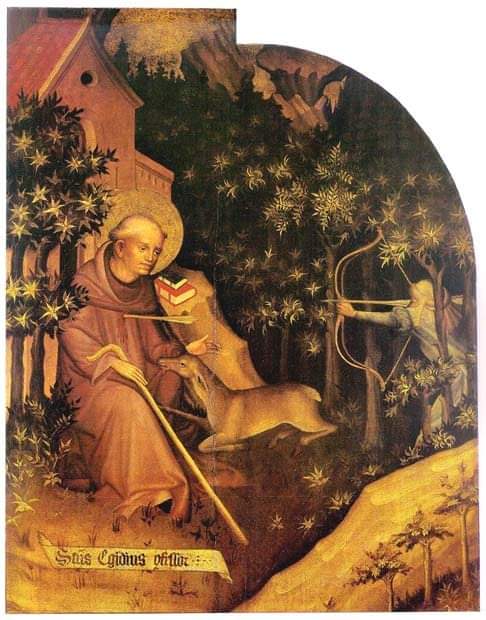 The Legenda Aurea links him with Arles, but finally he withdrew deep into the forest near Nîmes, where in the greatest solitude he spent many years, his sole companion being his beloved deer, or red deer, who in some stories sustained him on her milk. Giles ate a Christian vegetarian diet. This retreat was finally discovered by the king’s hunters, who had pursued the hind to its place of refuge. An arrow shot at the deer wounded the saint instead, who afterwards became a patron of the physically disabled.

The king, by legend, was Wamba, an anachronistic Visigoth, but must have been a Frank in the original story due to the historical setting. He held the hermit in high esteem for his humility in rejecting all honors save having some disciples. Wamba built him a monastery in his valley, Saint-Gilles-du-Gard, which Giles placed under the Benedictine rule. He died there in the early part of the 8th century, with the highest repute for sanctity and miracles.

A 10th-century Vita sancti Aegidii recounts that, as Giles was celebrating Mass to pardon the Emperor Charlemagne’s sins, an angel deposited upon the altar a letter outlining a sin so terrible Charlemagne had never dared confess it. Several Latin and French texts, including the Legenda Aurea refer to this hidden “sin of Charlemagne”. This legend, however, contradicts the well established later dates for the life of Charlemagne (approximately 742 – 28 January 814).

The town of St-Gilles-du-Gard sprang up around the abbey allegedly founded by him in the 7th century. That abbey (which was re-dedicated to him in the 10th century) remained the center of his cult, which was particularly strong in Languedoc, even after a rival body of Saint Giles appeared at Toulouse.

His cult spread rapidly far and wide throughout Europe in the Middle Ages, as is witnessed by the churches and monasteries dedicated to him in France, Spain, Germany, Poland, Hungary, Slovakia, and Great Britain; by the numerous manuscripts in prose and verse commemorating his virtues and miracles; and especially by the vast concourse of pilgrims who from all Europe flocked to his shrine.

In 1562, the relics of the saint were secretly transferred to Toulouse to protect them from the Huguenots and the level of pilgrimages declined. The restoration of most of the relics to the abbey of Saint-Gilles-du-Gard in 1862, and the publicized rediscovery of his former tomb there in 1865, helped the pilgrimages recommence.

Saint Giles is the patron saint of people with disabilities and is also invoked as a saint for childhood fears, convulsions, depression, particularly in Normandy, for example in Eure Iville, Saint Germain Village or Bernay or in Calvados, Gilles Touques. In medieval art, he is depicted with his symbol, the hind. His emblem is also an arrow. Giles is one of the Fourteen Holy Helpers, and the only non-martyr, initially invoked as protection against the Black Death. His feast day is 1 September.

Besides Saint-Gilles-du-Gard, nineteen other cities bear his name. Cities that possess relics of St. Giles include Saint-Gilles, Toulouse and many other French cities, including Antwerp, Brugge and Tournai in Belgium, Cologne and Bamberg in Germany (known as Egidien), Rome and Bologna in Italy, Prague in the Czech Republic, and Esztergom in Hungary.

Giles is also the patron saint of Edinburgh, the capital of Scotland, where St. Giles’ High Kirk is a prominent landmark. He is also the patron saint of Graz, Nuremberg, Osnabrück, Sankt Gilgen, Brunswick, Wollaberg, Saint-Gilles (Brussels Capital Region) and Sint-Gillis-Waas. In 1630, the church of Sant’Egidio in Trastevere in Rome was dedicated to him, and which since 1968 has housed the lay Community of Sant’Egidio.

Giles of Provence is remembered in the Church of England with a commemoration on 1 September. St. Giles’ name has been held in veneration in France and England. He is said to be an Athenian by birth and a noble. His piety and learning drew admirers, which pushed him to retire from the world and renounce its vanities. Hence he sought obscurity and mystical solitude.

The miracles attributed to his intercession made his name ring throughout all France. He was even esteemed by the French king; the latter failing to make St. Giles renounce his solitude. St. Giles, however, admitted disciples, and founded an excellent, disciplined monastery. In the following ages, his monastery became a flourishing abbey of the Benedictine Order.

O Lord, we plead that you grant the prayers made by your holy Abbot, Saint Giles, on our behalf, for we, in our weaknesses may by his advocacy find favour in your sight. 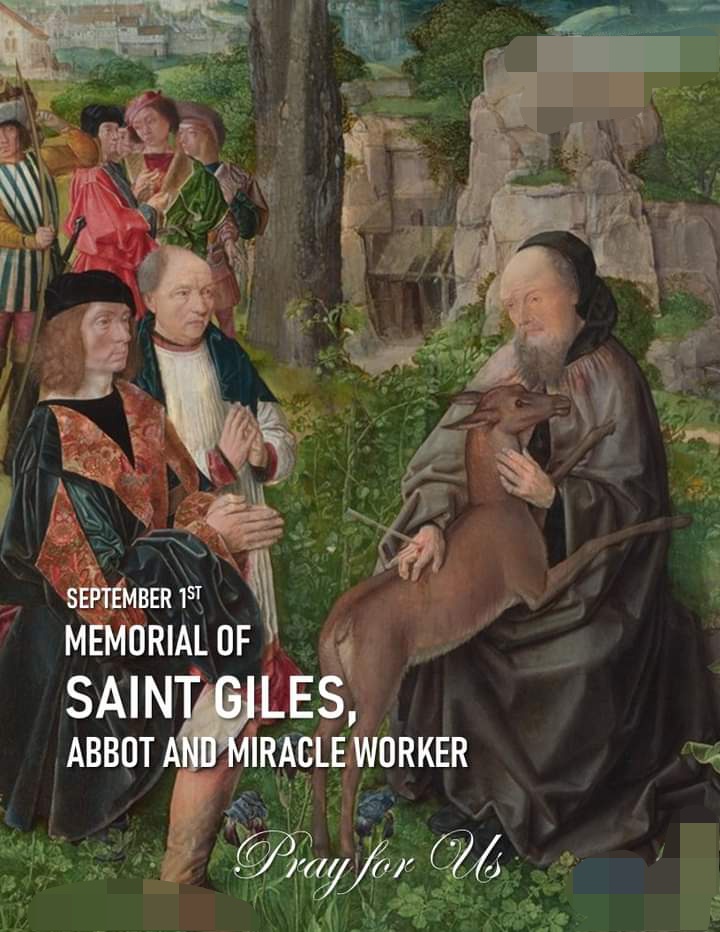 St. Giles, you realized that only God can make us really happy. We pray that you help us become God-centered in our lives and generous with our time. Saint Giles, pray for us.