Heribert of Cologne (c. 970 – 16 March 1021), also known as Saint Heribert, was a German Roman Catholic prelate who served as the Archbishop of Cologne from 999 until his death. He also served as the Chancellor for the Emperor Otto III since 994. He also collaborated with Henry II, Holy Roman Emperor with whom relations were strained, though were strengthened over time.

Heribert was born around 970 in Worms to Count Hugo and Tietwista. On the maternal side his half-brother was Heinrich who was the Bishop of Würzburg. He was educated at the Abbey of Gorze, at the Worms Cathedral and at the Benedictine Gorze convent Lorraine. He wanted to enter the Benedictine Order there, but his father recalled him to Worms and obtained a canonry for him. As a young priest, Heribert became a trusted counselor of the youthful Emperor Otto III, chancellor of the diocese, and finally Archbishop of Cologne in 998.

Heribert studied alongside Bruno of Carinthia who was the future Pope Gregory V. He returned to the Worms Cathedral to serve as its provost and received his ordination to the priesthood in 994 from Bishop Holdebold. The Bishop of Worms wanted Heribert to be his successor though the emperor took notice of him and planned to bring him as an advisor to his court.

The Emperor Otto III appointed him in 994 as the Italian chancellor and in 998 for the German kingdom. He held the latter position until Otto III’s death. He had accompanied the emperor to Rome in 996 and again in 997 and was still on the peninsula when word came that he had been chosen as the Archbishop of Cologne. In Benevento he received investiture and the pallium from the new Pope Sylvester II on 9 July 999 and on the following Christmas received his episcopal consecration at Cologne in the archdiocesan cathedral.

In 1002 he was present at the deathbed of Otto III at Paterno. While returning to his homeland to Aachen with the Emperor’s remains and the imperial insignia, he was captured at the behest of the future Saint Heinrich II whom he had first opposed but later served. In the ensuing skirmishing for the post of Emperor, St. Heribert at first was opposed to St. Henry II through a mutual misunderstanding.

But in time the two Saints, Archbishop and Emperor, were publicly reconciled and labored together for the good of the people. Once the latter was made king in 1002, Heribert acknowledged him as such and served as his collaborator and still as chancellor. The pair’s relations were not the best though the new emperor came to respect his abilities and the rift between them turned into a friendship.

In 1003 he founded the Deutz convent on the Rhine. Heribert often sent alms to the poor and sent alms to priests to distribute to the poor. Heribert died on 16 March 1021 in his archdiocese and was buried at his convent church after their transferral on 30 August 1147. Heribert contracted a fever while on a pastoral visitation and hurried back to Cologne to recover where he died within the week. He was honoured as a saint during his lifetime and was canonized in about 1075.

His reported miracles included ending a drought; he is thus invoked for beneficial rains. His relics were kept in the convent church at Deutz in a golden casket which is now preserved in the parish church of “Neu-St.Heribert”, in Köln-Deutz. He was revered as a kindly bishop who gave himself intensely to prayer and poured the riches of his own spiritual life on his people. The confidante of emperors, he never lost touch with God, or the people to whom he was father and shepherd.

St. Heribert was practically a model of what a Bishop should be. He was a peaceful man but a firm disciplinarian; a holy man but one who knew the value of money and saw to it that his was always divided among the poor. He was a man of prayer, and in a time of drought it was in answer to his prayers that a torrential rain fell, saving the harvest and delivering the people from famine. He is invoked in the time of drought.

God, Light and Shepherd of souls, You established St. Heribert as Bishop in Your Church to feed Your flock by his word and form it by his example. Help us through his intercession to keep the Faith he taught by his word. Amen 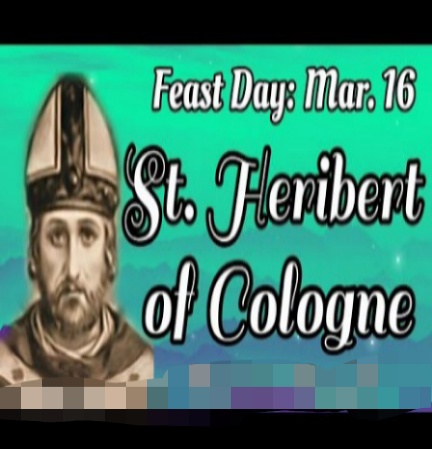 Saint Heribert of Cologne, pray for us.