FEAST OF SAINT HILARY OF ARLES – 5th MAY 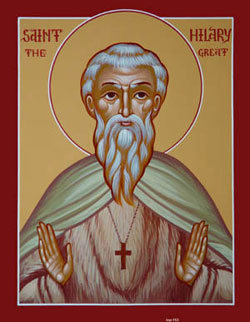 FEAST OF SAINT HILARY OF ARLES
FEAST DAY – 5th MAY

Hilary of Arles, also known by his Latin name Hilarius (c. 403–449), was a bishop of Arles in Southern France. He is recognized as a saint by the Roman Catholic and Eastern Orthodox Churches, with his feast day celebrated on 5 May.

In his early youth, or the 420s, Hilary joined the abbey of Lérins which was, at the time, presided over by his kinsman Honoratus. Hilary seems to have been living in Dijon before this, although other authorities believe he came from Belgica, or Provence. Hilary may have been a relative or “even the son” of the Hilarius who had been prefect of Gaul in 396 and of Rome in 408.

He came from a wealthy background and received a traditional aristocratic education in philosophy and rhetoric, which he expected to put to use in a secular career. Honoratus was deeply concerned for Hilary’s salvation, and urged him with tears to abandon worldly pursuits for the sake of following Christ.

“On one side,” Hilary later recalled, “I saw the Lord calling me; on the other the world offering me its seducing charms and pleasures. How often did I embrace and reject, will and not will the same thing! But in the end Jesus Christ triumphed in me. And three days after Honoratus had left me, the mercy of God, solicited by his prayers, subdued my rebellious soul.”

Hilary succeeded his kinsman Honoratus as bishop of Arles in 429. Following the example of Augustine of Hippo, he is said to have organized his cathedral clergy into a “congregation,” devoting a great part of their time to social exercises of asceticism.

He held the rank of metropolitan bishop of Vienne and Narbonne, and attempted to exercise the sort of primacy over the church of south Gaul, which seemed implied in the vicariate granted to his predecessor Patroclus of Arles. He was Bishop of Arles, France, and friend and relative of St. Honoratus.

Born to a noble family in Lorraine, he was successful, although he gave up his secular career to join St. Honoratus at Lerins Abbey. When Honoratus died after being named the bishop of Arles, and Hilary became his successor, he was known for his austerities, his aid to the poor, and for ransoming captives. 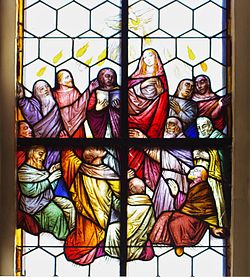 On two occasions Hilary became embroiled in controversies with Pope St. Leo I the Great, but they were reconciled, and Hilary’s sanctity brought him great veneration. Hilary deposed the bishop of Besançon, Chelidonus, for ignoring this primacy, and for claiming a metropolitan dignity for Besançon.

An appeal was made to Rome, and Pope Leo I used it, in 444, to extinguish the Gallican vicariate headed by Hilary, thus depriving him of his rights to consecrate bishops, call synods, or oversee the church in the province. The pope also secured the edict of Valentinian III, so important in the history of the Gallican church, which freed the Church of Vienne from all dependence on Arles.

These papal claims were made imperial law, and violation of them were subject to legal penalties. Léon Clugnet suggests that the dispute arose from the fact that the respective rights of the Court of Rome and of the metropolitan were not sufficiently established at that time, and that the right of appeal to the pope was not explicitly recognized.

Following his death in 449, Hilary’s name was introduced into the Roman martyrology. During his lifetime Hilary had a great reputation for learning and eloquence as well as for piety; his extant works (Vita S. Honorati Arelatensis episcopi and Metrum in Genesin) compare favourably with any similar literary productions of that period.

God our Father, you gave us, in Saint Hilary of Arles, a merciful man, who was largely known for his compassion to everyone. As Jesus taught his disciples, people identify followers of Christ by how they treat others. Saint Hilary strove always to act compassionately, whether on behalf of the poor or the prisoner, the innocent or the guilty.

Assist us, Lord, in emulating his attribute of humble service towards those in need, through Christ our Lord. Amen 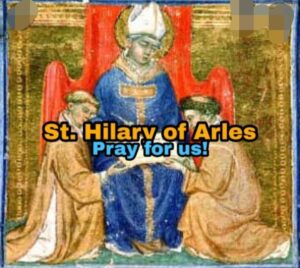 Saint Hilary of Arles, please help us to be always compassionate towards our fellowmen and pray for us all.