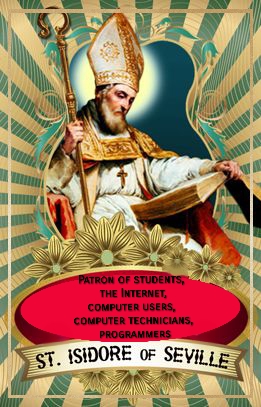 Isidore of Seville (c. 560 – 4 April 636) was a Spanish scholar and cleric. For over three decades, he was Archbishop of Seville. He is widely regarded, in the words of 19th-century historian Montalembert, as “the last scholar of the ancient world”. Isidore was born in Cartagena, Spain, a former Carthaginian colony, to Severianus and Theodora. Both Severianus and Theodora belonged to notable Hispano-Roman families of high social rank.

His parents were members of an influential family who were instrumental in the political-religious manoeuvring that converted the Visigothic kings from Arianism to Catholicism. The Catholic Church celebrates him and all his siblings as known saints. An elder brother, Leander of Seville, immediately preceded Isidore as Archbishop of Seville and, while in office, opposed King Liuvigild.

A younger brother, Fulgentius of Cartagena, served as the Bishop of Astigi at the start of the new reign of the Catholic King Reccared. His sister, Florentina of Cartagena, was a nun who allegedly ruled over forty convents and one thousand consecrated religious. This claim seems unlikely, however, given the few functioning monastic institutions in Spania during her lifetime.

At a time of disintegration of classical culture, aristocratic violence and widespread illiteracy, Isidore was involved in the conversion of the Arian Visigothic kings to Catholicism, both assisting his brother Leander of Seville and continuing after his brother’s death. He was influential in the inner circle of Sisebut, Visigothic king of Hispania. Like Leander, he played a prominent role in the Councils of Toledo and Seville.

His fame after his death was based on his Etymologiae, an etymological encyclopedia that assembled extracts of many books from classical antiquity that would have otherwise been lost. He also invented the period (full stop), comma, and colon. The vast colonial ambitions of Spain in the sixteenth and seventeenth centuries went hand in hand with equally epic Catholic missionary efforts.

This unity of purpose, these shared goals, with civil and ecclesiastical resources and powers working in concert, was the natural consequence of a country with a total unity of identity. Today’s saint was a singularly important, if remote, source for that powerful concurrence of Iberian theology, culture, art, and language which, after centuries of gestation, became the Spanish juggernaut that conquered and evangelized a hemisphere in the 1500s.

As a youth, Isidore received an excellent classical education in the Roman tradition, similar to the classical learning Saint Augustine imbibed two centuries before him and utilized to such great effect. Yet Isidore not only learned a great deal, he also remembered it and was uncommonly dedicated to his intellectual pursuits, writing numerous weighty tomes. The breadth and depth of his learning were without equal in his time.

It was simply said that Isidore, Archbishop of Seville, knew everything. He is considered by many to be the last of the Latin Fathers of the Church, those early Christian theologians whose writings are the gold standard for all subsequent theologians. His knowledge was put to good use. As the Roman world, which had dominated Spain for so many centuries, slowly crumbled away in the fifth and sixth centuries, Visigothic (Western Goths) tribes overran Spain.

Like their Gothic cousins in Central Europe, the Visigoths were Arians, and Arians were heretics. They denied that Christ was consubstantial with the Father and accepted all that flowed from that erroneous starting point. Saint Isidore played an important role in the assimilation of the Visigoths to Nicene Catholicism after one of their Kings abandoned Arianism.

Theological unity having been achieved, the old Roman culture of Iberia slowly blended with Visigothic culture to form something new—Spain. Saint Isidore was, then, a nation builder, because he was first a Church builder. And he built the Church not just through his massive erudition but also through effective headship in calling and guiding Church synods, by establishing liturgical unity through the Mozarabic Rite, and by encouraging scholarship and learning through the Cathedral schools he mandated in every diocese.

Saint Isidore’s most enduring work is his Etymologies (or Origins), an enormous compendium of universal knowledge. It was the standard encyclopedia in Medieval libraries and continued to be utilized as late as the Renaissance. No author’s manuscripts were more widely copied in the Middle Ages than Isidore’s. Although Saint Isidore was not a creative thinker in the same class as Saint Augustine or the Eastern Fathers of the Church, his mind was such a vast storehouse of knowledge that Pope Saint John Paul II named him the Patron Saint of the Internet.

After a long reign as Archbishop of Seville, in his last days Saint Isidore prepared for death by wearing sackcloth and ashes, confessing his faults to his people in church, and asking their forgiveness. He died in his late seventies in 636, just four years after Mohammed, the founder of Islam, died in Saudi Arabia. About seventy-five years after their deaths, Muslim armies crossed the strait of Gibraltar from North Africa and began the long conquest which obliterated the Visigoths.

The Spanish reconquest of their nation would take centuries until, in 1492, the last Muslim stronghold, Granada, fell. Both sides were inspired by faith more than patriotism. Both sides fought. Both sides thought they were right. In the end, the nation Isidore created was the stronger and drove Mohammed’s heirs back over the waters to Africa. Isidore’s enormous legacy was a Catholic nation, and it prevailed.

His attributes are bees; bishop holding a pen while surrounded by a swarm of bees; bishop standing near a beehive; old bishop with a prince at his feet; pen; priest or bishop with pen and book; with Saint Leander, Saint Fulgentius, and Saint Florentina; with his Etymologiae. He is Patron of students, the Internet, computer users, computer technicians, programmers (all electronic patronages are unofficial). 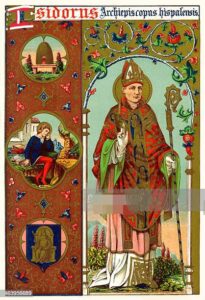 Saint Isidore, you used your education and knowledge to great effect to evangelize all people. Help those who seek your intercession to unite their learning with zeal for the good of the Church and the many peoples it serves. Amen