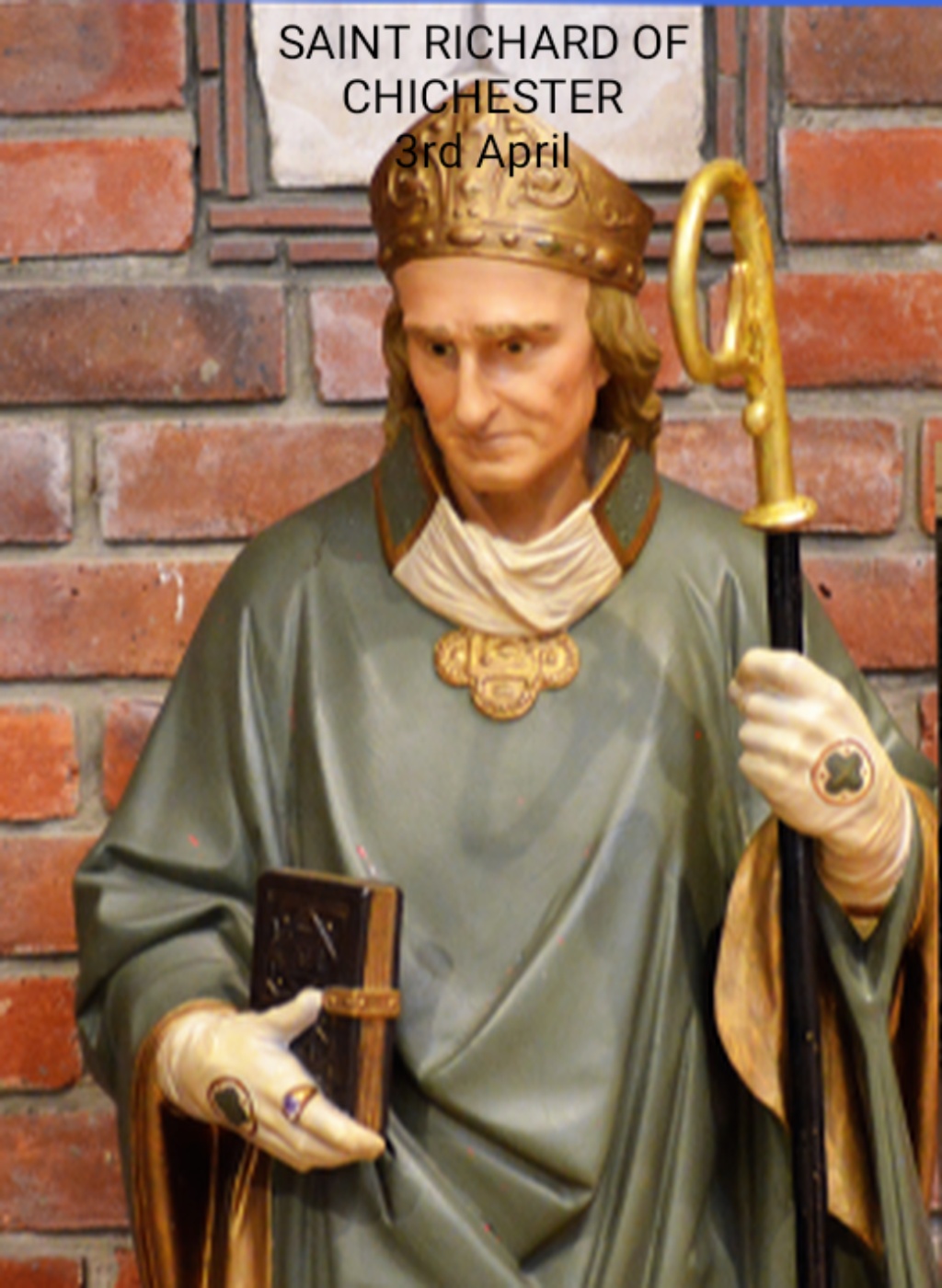 Richard of Chichester, also known as Richard Wych, or “of Wich” (1197 – 1253), was born at Droitwich in 1197. He studied at Oxford and perhaps at Paris and Bologna. In 1223 he became Chancellor at the University of Oxford, but was soon whisked away to become chancellor to St Edmund Rich, Archbishop of Canterbury (1233 – 40).

Edmund quarrelled with King Henry III over the rights of the Church and went into exile in France. After Edmund’s death (1240), Richard studied for the priesthood with the Dominicans at Orleans and was ordained in 1243. He returned to England and worked as a parish priest until the new Archbishop Boniface of Savoy asked him to resume his job as chancellor. The new Archbishop also quarrelled with the king.

He appointed Richard as bishop of Chichester when the king had appointed his own candidate. Pope Innocent IV upheld Richard’s appointment and consecrated him bishop at Lyons in 1245. Henry, however, confiscated all the diocesan property and decreed that no one should give him shelter. Richard returned to the diocese and lived in the house of one of his priests and visited his diocese on foot. Eventually, the king relented and Richard administered the diocese for seven and a half years.

He was a reforming bishop, of simple personal habits, generous in his charities and merciless towards simony and nepotism. He provided suitable vicarages for his clergy, but insisted that they observe celibacy, say Mass reverently and instruct the people on the meaning of the sacraments. Richard preached to raise volunteers for a crusade, but emphasised the spiritual aims of visiting the holy places. He died in 1253 and was canonised in 1262.

In Chichester, Richard healed a crippled boy by getting him to drink from a cup given by St Edmund. The most well-known miracle, however, is when Richard, tired and ill, was celebrating Mass and dropped the chalice of consecrated wine. It fell on its side, but not a single drop of wine spilled from it. His attributes are a Bishop with a chalice on its side at his feet, kneeling with the chalice before him, ploughing his brother’s fields, blessing his flock with a chalice nearby. 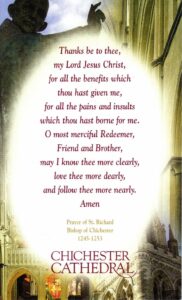 To Saint Richard is attributed the prayer:  “Thanks be to my Lord Jesus Christ for all the benefits thou hast given me, for all the pains and insults thou hast borne for me. O most merciful Redeemer, friend and brother, may I know thee more clearly, love thee more dearly and follow thee more nearly, day by day. Amen”. He is the patron of Sussex in southern England; and also of coachmen,and the Diocese of Chichester.

Most Merciful Redeemer, who gavest to Thy Bishop Richard a love of learning, a zeal for souls, and a devotion to the poor, grant that, encouraged by his example, and aided by his prayers, we may know thee more clearly, love thee more dearly, and follow thee more nearly, day by day, who livest and reignest with the Father in the unity of the Holy Spirit, ever one God, world without end. Amen 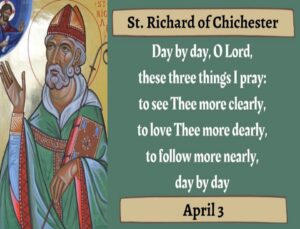 Saint Richard of Chichester, pray for us.