FEAST OF SAINT ISIDORE, THE FARMER – 15th MAY 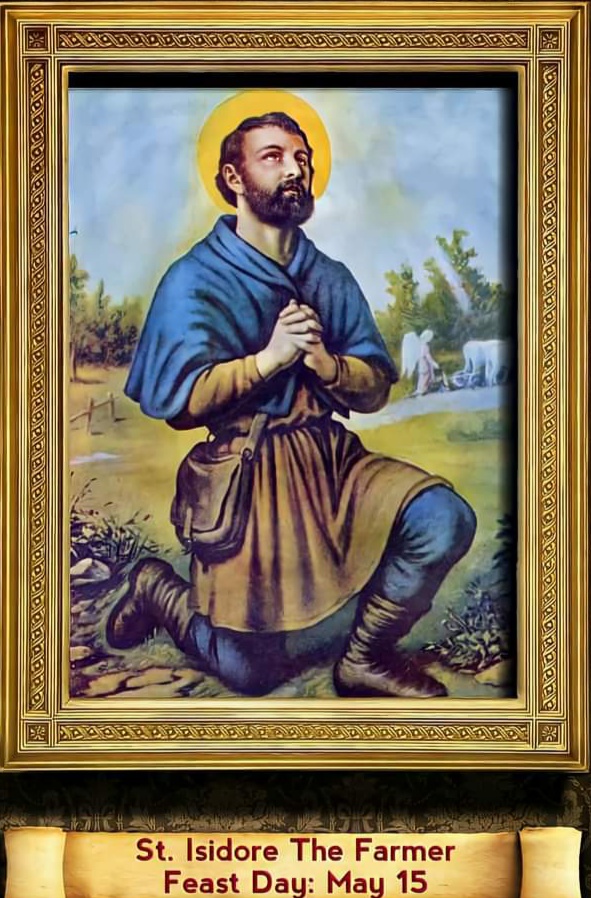 FEAST OF SAINT ISIDORE THE FARMER
FEAST DAY – 15th MAY

Isidore the Farm Labourer, also known as Isidore the Farmer (c. 1070 – May 15, 1130), was a Spanish farmworker known for his piety toward the poor and animals. He is the Catholic patron saint of farmers and of Madrid, El Gobernador, Jalisco and of La Ceiba, Honduras. His feast day is May 15. His real name was Isidro de Merlo y Quintana.

Isidore was born in Madrid, in about the year 1070, of poor but very devout parents, and was christened Isidore from the name of their patron, St. Isidore of Seville. Isidore spent his life as a hired hand in the service of the wealthy Madrilenian landowner Juan de Vargas on a farm in the city’s vicinity. He shared what he had, even his meals, with the poor. Juan de Vargas would later make him bailiff of his entire estate of Lower Caramanca. 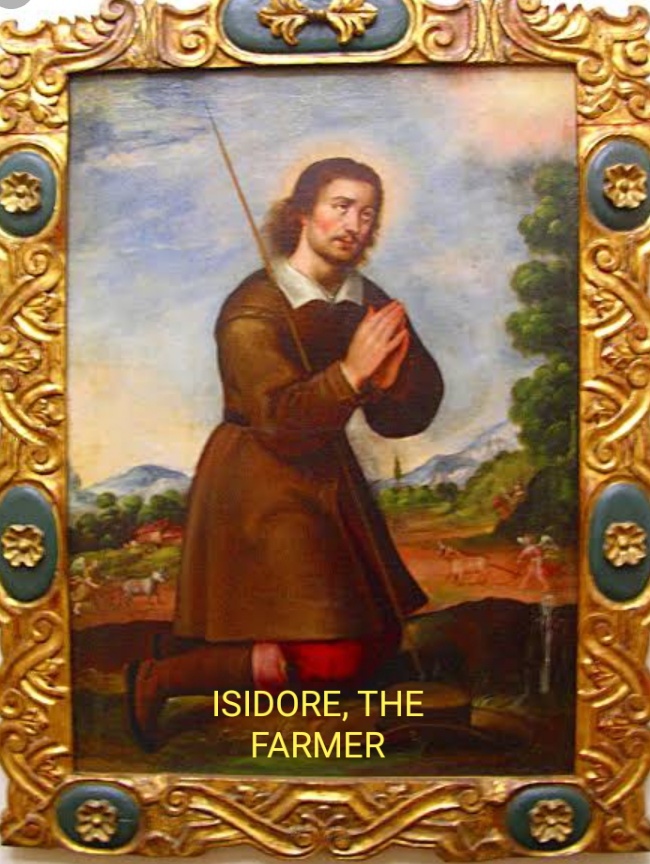 Isidore married Maria Torribia, known as Santa María de la Cabeza in Spain; she has never been canonized, pending confirmation by Pope Francis. Isidore and Maria had one son. On one occasion, their son fell into a deep well and, at the prayers of his parents, the water of the well is said to have risen miraculously to the level of the ground, bringing the child with it. In thanksgiving Isidore and Maria then vowed sexual abstinence and lived in separate houses. Their son later died in his youth.

Isidore died on May 15, 1130, at his birthplace close to Madrid, although the only official source places his death in the year 1172. In the morning before going to work, Isidore would usually attend Mass at one of the churches in Madrid. One day, his fellow farm workers complained to their master that Isidore was always late for work in the morning. Upon investigation the master found Isidore at prayer while an angel was doing the ploughing for him.

On another occasion, his master saw an angel ploughing on either side of him, so that Isidore’s work was equal to that of three of his fellow field workers. Isidore is also said to have brought back to life his master’s deceased daughter, and to have caused a fountain of fresh water to burst from the dry earth to quench his master’s thirst.

One snowy day, when going to the mill with wheat to be ground, he passed a flock of wood-pigeons scratching vainly for food on the hard surface of the frosty ground. Taking pity on the poor animals, he poured half of his sack of precious wheat upon the ground for the birds, despite the mocking of witnesses. When he reached the mill, however, the bag was full, and the wheat, when it was ground, produced double the flour. 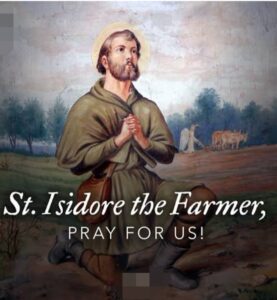 Isidore’s wife, Maria, always kept a pot of stew on the fireplace in their humble home as Isidore would often bring home anyone who was hungry. One day he brought home more hungry people than usual. After she served many of them, Maria told him that there simply was no more stew in the pot. He insisted that she check the pot again, and she was able to spoon out stew to feed them all.

On April 2, 1212, after torrential rains had exhumed cadavers from cemeteries in Madrid, his body was discovered in an apparent state of incorruptibility. He is said to have appeared to Alfonso VIII of Castile, and to have shown him the hidden path by which he surprised the Moors and gained the victory of Las Navas de Tolosa, in 1212.

When King Philip III of Spain was cured of a deadly disease after touching the relics of the saint, the king replaced the old reliquary with a costly silver one and instigated the process of his beatification. Throughout history, other members of the royal family would seek curative powers from the saint.

The number of miracles attributed to him has been counted as 438. The only original source of hagiography on him is a fourteenth century codex called Códice de Juan Diácono which relates five of his miracles:

The pigeons and the grain.
The angels ploughing.
The saving of his donkey, through prayer, from a wolf attack.
The account of his wife’s pot of food.
A similar account of his feeding the brotherhood. 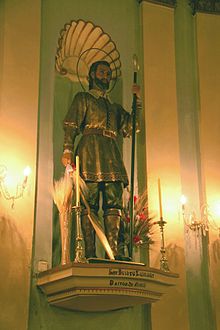 The codex also attests to the incorruptible state of his body, stating it was exhumed 40 years after his death. Isidore was beatified in Rome on May 2, 1619, by Pope Paul V. He was canonized nearly three years later by Pope Gregory XV, along with Saints Ignatius of Loyola, Francis Xavier, Teresa of Ávila and Philip Neri, on March 12, 1622.

In 1696, his relics were moved to the Royal Alcazar of Madrid to intervene on behalf of the health of Charles II of Spain. The King’s locksmith pulled a tooth from the body and gave it to the monarch, who slept with it under his pillow until his death. This was not the first, nor the last time his body was mutilated out of religious fervour. For example, it was reported one of the ladies in the court of Isabella I of Castile bit off one of his toes.

In 1760, his body was brought to the Royal Palace of Madrid during the illness of Maria Amalia of Saxony. In 1769, Charles III of Spain had the remains of Saint Isidore and his wife Maria relocated to the San Isidro Church, Madrid. The sepulcher has nine locks and only the King of Spain has the master key.

The opening of the sepulcher must be performed by the Archbishop of Madrid and authorized by the King himself. Consequently, it has not been opened since 1985. His feast day is celebrated on May 15 in the Catholic Church, and in the Philippine Independent Church. Saint Isidore is widely venerated as the patron saint of farmers, peasants, day laborers and agriculture in general, as well as brick layers.

His hometown of Madrid, the Spanish cities of Leon, Zaragoza, and Seville, and various locales in the former Spanish Empire honour him as their patron saint. The US National Catholic Rural Life Conference claims him as its patron. San Ysidro, California, and San Ysidro, New Mexico, were named after him

The story of St. Isidore is a reminder of the dignity of work, and that ordinary life can lead to holiness. Legends about angel helpers and mysterious oxen indicate that his work was not neglected and his duties did not go unfulfilled. St. Isidore’s life demonstrates that if you have your spiritual self in order, your earthly commitments will fall into order also.

The house of his master, Juan de Vargas, in Madrid is now a museum, popularly known as the “Casa de San Isidro”. It houses temporary exhibitions on the history of Madrid, as well as on the life of the saint. It is not to be confused with the aforementioned San Isidro Church. Not only does this museum contain a chapel built upon the place where Isidore lived and died, but also the well where his son fell and was saved.

Merciful Father, we humbly beseech you, through the intercession of Blessed Isidore, farmer and confessor, not to let us be vain with the wisdom of the world, but by his merits and example, let us in all humility always do what is pleasing to you. Through Christ our Lord. Amen 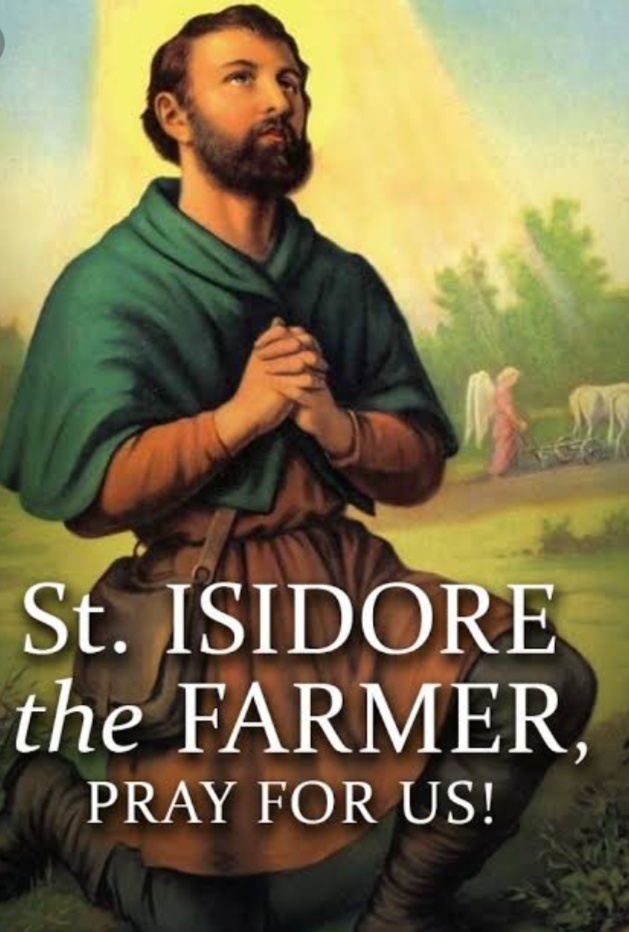 Good Saint Isidore, bless us and our labors, that we may some day reap the reward of good works with you in heaven. Amen